In this letter, locally recoverable codes with maximal recoverability are studied with a focus on identifying the MDS codes resulting from puncturing and shortening. By using matroid theory and the relation between MDS codes and uniform minors, the list of all the possible uniform minors is derived. This list is used to improve the known non-asymptotic lower bound on the required field size of a maximally recoverable code. 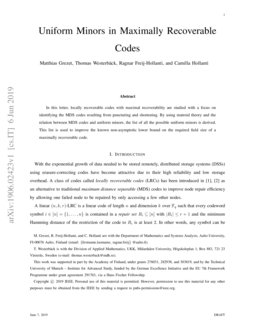 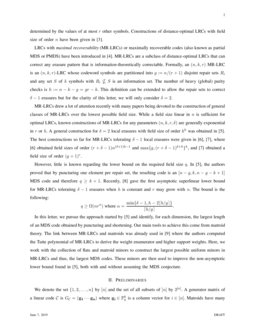 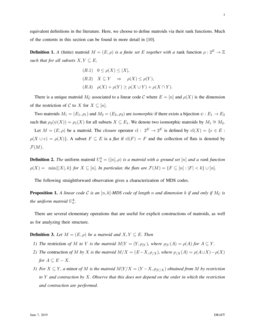 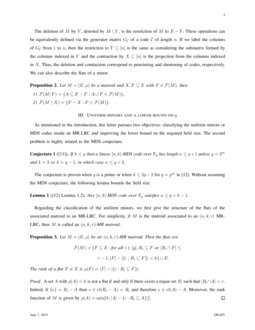 With the exponential growth of data needed to be stored remotely, distributed storage systems (DSSs) using erasure-correcting codes have become attractive due to their high reliability and low storage overhead. A class of codes called locally recoverable codes (LRCs) has been introduced in [1, 2] as an alternative to traditional maximum distance separable (MDS) codes to improve node repair efficiency by allowing one failed node to be repaired by only accessing a few other nodes.

A linear (n,k,r)-LRC is a linear code of length n and dimension k over Fq such that every codeword symbol i∈[n]={1,…,n} is contained in a repair set Ri⊆[n] with |Ri|≤r+1 and the minimum Hamming distance of the restriction of the code to Ri is at least 2. In other words, any symbol can be determined by the values of at most r other symbols. Constructions of distance-optimal LRCs with field size of order n have been given in [3].

LRCs with maximal recoverability (MR-LRCs) or maximally recoverable codes (also known as partial MDS or PMDS) have been introduced in [4]. MR-LRCs are a subclass of distance-optimal LRCs that can correct any erasure pattern that is information-theoretically correctable. Formally, an (n,k,r) MR-LRC is an (n,k,r)-LRC whose codeword symbols are partitioned into g:=n/(r+1) disjoint repair sets Ri and any set S of k symbols with Ri⊈S is an information set. The number of heavy (global) parity checks is h:=n−k−g=gr−k. This definition can be extended to allow the repair sets to correct δ−1 erasures but for the clarity of this letter, we will only consider δ=2.

However, little is known regarding the lower bound on the required field size q. In [5], the authors proved that by puncturing one element per repair set, the resulting code is an [n−g,k,n−g−k+1] MDS code and therefore q≥k+1. Recently, [8] gave the first asymptotic superlinear lower bound for MR-LRCs tolerating δ−1 erasures when h is constant and r may grow with n. The bound is the following:

In this letter, we pursue the approach started by [5] and identify, for each dimension, the largest length of an MDS code obtained by puncturing and shortening. Our main tools to achieve this come from matroid theory. The link between MR-LRCs and matroids was already used in [9] where the authors computed the Tutte polynomial of MR-LRCs to derive the weight enumerator and higher support weights. Here, we work with the collection of flats and matroid minors to construct the largest possible uniform minors in MR-LRCs and thus, the largest MDS codes. These minors are then used to improve the non-asymptotic lower bound found in [5], both with and without assuming the MDS conjecture.

is a column vector for

i∈[n]. Matroids have many equivalent definitions in the literature. Here, we choose to define matroids via their rank functions. Much of the contents in this section can be found in more detail in [10].

A (finite) matroid M=(E,ρ) is a finite set E together with a rank function ρ:2E→Z such that for all subsets X,Y⊆E,

There is a unique matroid MC associated to a linear code C where E=[n] and ρ(X) is the dimension of the restriction of C to X for X⊆[n].

The following straightforward observation gives a characterization of MDS codes.

A linear code C is an [n,k]-MDS code of length n and dimension k if and only if MC is the uniform matroid Ukn.

There are several elementary operations that are useful for explicit constructions of matroids, as well as for analyzing their structure.

The deletion of M by Y, denoted by M∖Y, is the restriction of M to E−Y. These operations can be equivalently defined via the generator matrix GC of a code C of length n. If we label the columns of GC from 1 to n, then the restriction to Y⊆[n] is the same as considering the submatrix formed by the columns indexed in Y and the contraction by X⊆[n] is the projection from the columns indexed in X. Thus, the deletion and contraction correspond to puncturing and shortening of codes, respectively. We can also describe the flats of a minor.

Iii Uniform minors and a lower bound on q

As mentioned in the introduction, this letter pursues two objectives: classifying the uniform minors or MDS codes inside an MR-LRC and improving the lower bound on the required field size. The second problem is highly related to the MDS conjecture.

The conjecture is proven when q is a prime or when k≤2p−2 for q=pm in [12]. Without assuming the MDS conjecture, the following lemma bounds the field size.

Regarding the classification of the uniform minors, we first give the structure of the flats of the associated matroid to an MR-LRC. For simplicity, if M is the matroid associated to an (n,k,r) MR-LRC, then M is called an (n,k,r)-MR matroid.

The following theorem by Higgs is known as the Scum Theorem. It significantly restricts the sets A⊆B⊆E that one must consider in order to find all minors of M as M|B/A.

The next four propositions classify all the uniform minors in an MR-LRC. One uniform minor has already been obtained in [5] by deleting one element per repair set. It can be formulated as follows.

Let M be an (n,k,r)-MR matroid. Then M contains a Ukn′ minor where

Let M be an (n,k,r)-MR matroid. Then M contains a Urn′ minor where

The second condition implies that if there exists a non-empty Bi⊊Ri with Bi⊆F, then either Ri⊆F or we need to delete an element from M. The reason is that if |Bi|=r, then Ri⊆F since F is a flat. If |Bi|≤r−1, then let e∈Ri−Bi and choose A=Ri−Bi−{e}. We have |A|≤r−1 but F∪A is not a flat because e∈cl(F∪A)−F∪A.

Assume now that r∤k. In this case, we need to add a part of a repair set to complete the rank and delete an element to remove the unwanted flat. Let F1=⋃i∈{1,…,⌊kr⌋−1}Ri. Then, we have

Hence, |F|=ρ(F)=k−k′ and for all A⊆E−F with |A|≤k′−1, we have F∪A∈F(M) since F consists of independent elements where no more than r−k′ elements of F are contained in the same repair set.

The condition on j′ simplifies as follows.

We are left with the case r<k′<k. In fact, requesting k′>r forces the deletion of one element per repair set and the minor obtained is a subminor of the uniform minor obtained in Proposition 4. We state it here for completeness.

The techniques developed here easily generalize to the case when δ>2 by taking the size of a repair set to be r+δ−1 and deleting δ−1 elements instead of 1.

Let M be an (n,k,r)-MR matroid with g=nr+1. The largest size of a uniform minor is

Figure 1 displays the comparison between the length (1), (2), and (3) for fixed k and r. As we can see, (1) is the largest length in the high-rate regime while (3) is the largest length in the low-rate regime. While high-rate codes are preferable for storage, low-rate codes have advantages in terms of availability of hot data and lead to better rates when considering private information retrieval schemes.

Without assuming the MDS conjecture, we can use Lemma 1 to obtain a lower bound on the field size. When applying the lemma to the uniform minor obtained in Proposition 6, the dimension cancels out and the bound is maximized when k′=2.

In this letter, we studied maximally recoverable codes with a focus on classifying their uniform minors. As a direct consequence, we obtained the largest length of an MDS code inside an MR-LRC. Using the relation between MDS codes and the field size, we derived a lower bound on the required field size of an MR-LRC improving on the non-asymptotic bound in the low-rate regime. However, the gap between the lower bounds and the constructions remains an intriguing open problem. In particular, our results show that new techniques not relying on the MDS conjecture need to be found in order to close it.