Super-resolution of the Lie-Trotter splitting (S_1) and Strang splitting (S_2) is rigorously analyzed for the nonlinear Dirac equation without external magnetic potentials in the nonrelativistic limit regime with a small parameter 0<ε≤ 1 inversely proportional to the speed of light. In this limit regime, the solution highly oscillates in time with wavelength at O(ε^2) in time. The splitting methods surprisingly show super-resolution, in the sense of breaking the resolution constraint under the Shannon's sampling theorem, i.e. the methods can capture the solution accurately even if the time step size τ is much larger than the sampled wavelength at O(ε^2). Similar to the linear case, S_1 and S_2 both exhibit 1/2 order convergence uniformly with respect to ε. Moreover, if τ is non-resonant, i.e. τ is away from certain region determined by ε, S_1 would yield an improved uniform first order O(τ) error bound, while S_2 would give improved uniform 3/2 order convergence. Numerical results are reported to confirm these rigorous results. Furthermore, we note that super-resolution is still valid for higher order splitting methods. 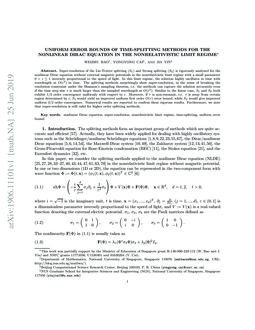 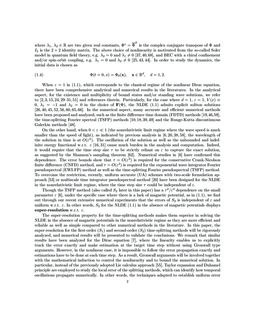 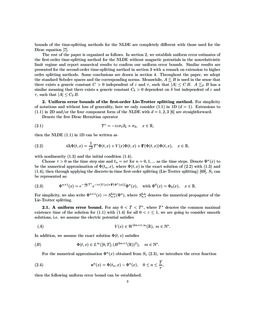 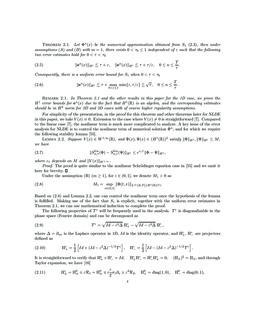 An adaptive splitting method for the Cox-Ingersoll-Ross process

The nonlinearity F(Φ) in (1.1) is usually taken as

On the other hand, when 0<ε≪1 (the nonrelativistic limit regime where the wave speed is much smaller than the speed of light), as indicated by previous analysis in [6, 38, 58, 20], the wavelength of the solution in time is at O(ε2). The oscillation of the solution as well as the unbounded and indefinite energy functional w.r.t. ε [16, 31] cause much burden in the analysis and computation. Indeed, it would require that the time step size τ to be strictly reliant on ε to capture the exact solution, as suggested by the Shannon’s sampling theorem [62]. Numerical studies in [6] have confirmed this dependence. The error bounds show that τ=O(ε3) is required for the conservative Crank-Nicolson finite difference (CNFD) method, and τ=O(ε2) is required for the exponential wave integrator Fourier pseudospectral (EWI-FP) method as well as the time-splitting Fourier pseudospectral (TSFP) method. To overcome the restriction, recently, uniform accurate (UA) schemes with two-scale formulation approach [53] or multiscale time integrator pseudospectral method [20] have been designed for the NLDE in the nonrelativistic limit regime, where the time step size τ could be independent of ε.

Though the TSFP method (also called S2 later in this paper) has a τ2/ε4 dependence on the small parameter ε [6], under the specific case where there is a lack of magnetic potential, as in (1.1), we find out through our recent extensive numerical experiments that the errors of S2 is independent of ε and uniform w.r.t. ε. In other words, S2 for the NLDE (1.1) in the absence of magnetic potentials displays super-resolution w.r.t. ε.

The super-resolution property for the time-splitting methods makes them superior in solving the NLDE in the absence of magnetic potentials in the nonrelativistic regime as they are more efficient and reliable as well as simple compared to other numerical methods in the literature. In this paper, the super-resolution for the first-order (S1) and second-order (S2) time-splitting methods will be rigorously analyzed, and numerical results will be presented to validate the conclusions. We remark that similar results have been analyzed for the Dirac equation [7]

, where the linearity enables us to explicitly track the error exactly and make estimation at the target time step without using Gronwall type arguments. However, in the nonlinear case, it is impossible to follow the error propagation exactly and estimations have to be done at each time step. As a result, Gronwall arguments will be involved together with the mathematical induction to control the nonlinearity and to bound the numerical solution. In particular, instead of the previously adopted Lie calculus approach

[55], Taylor expansion and Duhamel principle are employed to study the local error of the splitting methods, which can identify how temporal oscillations propagate numerically. In other words, the techniques adapted to establish uniform error bounds of the time-splitting methods for the NLDE are completely different with those used for the Dirac equation [7].

The rest of the paper is organized as follows. In section 2, we establish uniform error estimates of the first-order time-splitting method for the NLDE without magnetic potentials in the nonrelativistic limit regime and report numerical results to confirm our uniform error bounds. Similar results are presented for the second-order time-splitting method in section 3 with a remark on extension to higher order splitting methods. Some conclusions are drawn in section 4. Throughout the paper, we adopt the standard Sobolev spaces and the corresponding norms. Meanwhile, A≲B is used in the sense that there exists a generic constant C>0 independent of ε and τ, such that |A|≤CB. A≲δB has a similar meaning that there exists a generic constant Cδ>0 dependent on δ but independent of ε and τ, such that |A|≤CδB.

For simplicity, we also write Φn+1(x):=SLien,τ(Φn), where SLien,τ denotes the numerical propagator of the Lie-Trotter splitting.

For any 0<T<T∗, where T∗ denotes the common maximal existence time of the solution for (1.1) with (1.4) for all 0<ε≤1, we are going to consider smooth solutions, i.e. we assume the electric potential satisfies

In addition, we assume the exact solution Φ(t,x) satisfies

For the numerical approximation Φn(x) obtained from S1 (2.3), we introduce the error function

then the following uniform error bound can be established. Let Φn(x) be the numerical approximation obtained from S1 (2.3), then under assumptions (A) and (B) with m=1, there exists 0<τ0≤1 independent of ε such that the following two error estimates hold for 0<τ<τ0

Consequently, there is a uniform error bound for S1 when 0<τ<τ0

In Theorem 2.1 and the other results in this paper for the 1D case, we prove the H1 error bounds for en(x) due to the fact that H1(R) is an algebra, and the corresponding estimates should be in H2 norm for 2D and 3D cases with of course higher regularity assumptions.

For simplicity of the presentation, in the proof for this theorem and other theorems later for NLDE in this paper, we take V(x)≡0. Extension to the case where V(x)≠0 is straightforward [7]. Compared to the linear case [7], the nonlinear term is much more complicated to analyze. A key issue of the error analysis for NLDE is to control the nonlinear term of numerical solution Φn, and for which we require the following stability lemma [55]. Suppose V(x)∈W1,∞(R), and Φ(x),Ψ(x)∈(H1(R))2 satisfy ∥Φ∥H1,∥Ψ∥H1≤M, we have

where c1 depends on M and ∥V(x)∥W1,∞. The proof is quite similar to the nonlinear Schrödinger equation case in [55] and we omit it here for brevity.

Based on (2.8) and Lemma 2.1, one can control the nonlinear term once the hypothesis of the lemma is fulfilled. Making use of the fact that S1 is explicit, together with the uniform error estimates in Theorem 2.1, we can use mathematical induction to complete the proof.

The following properties of Tε will be frequently used in the analysis. Tε is diagonalizable in the phase space (Fourier domain) and can be decomposed as

where Δ=∂xx is the Laplace operator in 1D, Id is the identity operator, and Πε+, Πε− are projectors defined as

which is a uniformly bounded operator w.r.t ε from (Hm(R))2→(Hm−2(R))2 for m≥2, then the evolution operator eitε2Tε can be expressed as

Now we are ready to introduce the following lemma for proving Theorem 2.1.

By Duhamel’s principle, the solution Φ(t,x) to (2.2) satisfies

Noticing (2.20), the assumption that ∥Φn∥H1≤M1+1, and the fact that e−isTε/ε2 preserves Hk norm, it is not difficult to find

On the other hand, using Taylor expansion in Λn1(x) and the local H1 Lipschitz property of F, we get

Since F is of polynomial type, by direct computation, we can further simplify (2.27) to get

which completes the proof of Lemma 2.1.

Now, we proceed to prove Theorem 2.1.  We will prove by induction that the estimates (2.5)-(2.6) hold for all time steps n≤Tτ together with

and the other terms in fn2(s) can be estimated similarly. As R1:(Hm)2→(Hm−1)2 is uniformly bounded with respect to ε∈(0,1], we have (with detailed computations omitted)

On the other hand, using Taylor expansion and the second inequality in (2.39), we have