Uniform CSP Parameterized by Solution Size is in W[1]

We show that the uniform Constraint Satisfaction Problem (CSP) parameterized by the size of the solution is in W[1] (the problem is W[1]-hard and it is easy to place it in W[3]). We study the problem on the Boolean domain, that is 0, 1. The size of a solution is the number of variables that are mapped to 1. Named by Kolaitis and Vardi (2000), uniform CSP means that the input contains the domain and the list of tuples of each relation in the instance. Uniform CSP is polynomial time equivalent to homomorphism problem and also to evaluation of conjunctive queries on relational databases. It also has applications in artificial intelligence. We do not restrict the problem to any (finite or infinite) family of relations. Uniform CSP restricted to some finite family of Boolean relations (thus with a bound on the arity of relations) can easily be placed in W[1]. Marx (2005) proved that any such problem is either W[1]-complete or fixed parameter tractable. Together with Bulatov (2014) they extended this result to any finite domain. Our proof gives a nondeterministic RAM program with special properties deciding the problem. First defined by Chen et al. (2005), such programs characterize W[1]. Our work builds upon the work of Cesati (2002), which, answering a longstanding open question, shows that parameterized Exact Weighted CNF is in W[1]. This problem is equivalent to uniform CSP restricted to a specific (infinite) family of Boolean relations, where a tuple is in a relation, if and only if the tuple has exactly one 1. Thus, our result generalizes that of Cesati in at least two ways: There is no bound on the size of the tuples of the relations, and the relations do not need to be symmetric. 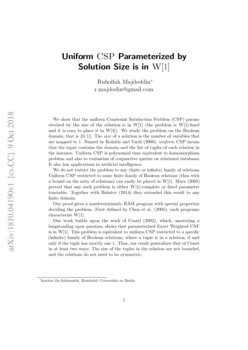 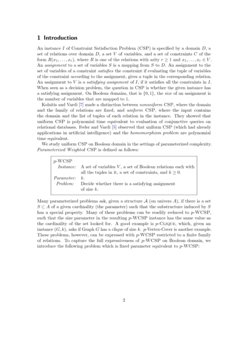 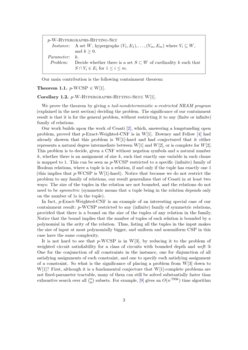 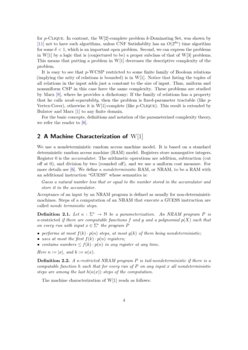 On the hardness of losing weight

For relational structures A, B of the same signature, the Promise Constr...
Alexandr Kazda, et al. ∙

Expectation of the Largest Betting Size in Labouchère System

Kolaitis and Vardi [7] made a distinction between nonuniform CSP, where the domain and the family of relations are fixed, and uniform CSP, where the input contains the domain and the list of tuples of each relation in the instance. They showed that uniform CSP is polynomial time equivalent to evaluation of conjunctive queries on relational databases. Feder and Vardi [5] observed that uniform CSP (which had already applications in artificial intelligence) and the homomorphism problem are polynomial time equivalent.

We study uniform CSP on Boolean domain in the settings of parameterized complexity. Parameterized Weighted CSP is defined as follows:

Many parameterized problems ask, given a structure A (on univers A), if there is a set S⊂A of a given cardinality (the parameter) such that the substructure induced by S has a special property. Many of these problems can be readily reduced to p-WCSP, such that the size parameter in the resulting p-WCSP instance has the same value as the cardinality of the set looked for. A good example is p-Clique, which, given an instance \lparenG,k\rparen, asks if Graph G has a clique of size k. p-Vertex-Cover is another example. These problems, however, can be expressed with p-WCSP restricted to a finite family of relations. To capture the full expressiveness of p-WCSP on Boolean domain, we introduce the following problem which is fixed parameter equivalent to p-WCSP:

Our main contribution is the following containment theorem:

We prove the theorem by giving a tail-nondeterministic κ-restricted NRAM program (explained in the next section) deciding the problem. The significance of our containment result is that it is for the general problem, without restricting it to any (finite or infinite) family of relations.

Our work builds upon the work of Cesati [2], which, answering a longstanding open problem, proved that p-Exact-Weighted-CNF is in \W[1]. Downey and Fellow [4] had already showen that this problem is \W[1]-hard and had conjectured that it either represents a natural degree intermediate between \W[1] and W[2], or is complete for W[2]. This problem is to decide, given a CNF without negation symbols and a natural number k, whether there is an assignment of size k, such that exactly one variable in each clause is mapped to 1. This can be seen as p-WCSP restricted to a specific (infinite) family of Boolean relations, where a tuple is in a relation, if and only if the tuple has exactly one 1 (this implies that p-WCSP is [1]-hard). Notice that because we do not restrict the problem to any family of relations, our result generalizes that of Cesati in at least two ways: The size of the tuples in the relation are not bounded, and the relations do not need to be symmetric (symmetric means that a tuple being in the relation depends only on the number of 1s in the tuple).

In fact, p-Exact-Weighted-CNF is an example of an interesting special case of our containment result: p-WCSP restricted to any (infinite) family of symmetric relations, provided that there is a bound on the size of the tuples of any relation in the family. Notice that the bound implies that the number of tuples of each relation is bounded by a polynomial in the arity of the relation. Thus, listing all the tuples in the input makes the size of input at most polynomially bigger, and uniform and nonuniform CSP in this case have the same complexity.

It is not hard to see that p-WCSP is in [3], by reducing it to the problem of weighted circuit satisfiability for a class of circuits with bounded depth and weft 3: One for the conjunction of all constraints in the instance, one for disjunction of all satisfying assignments of each constraint, and one to specify each satisfying assignment of a constraint. So what is the significance of placing a problem from [3] down to [1]? First, although it is a fundamental conjecture that [1]-complete problems are not fixed-parameter tractable, many of them can still be solved substantially faster than exhaustive search over all (nk) subsets. For example, [9] gives an O\lparenn.793k\rparen time algorithm for p-Clique. In contrast, the \W[2]-complete problem k-Dominating Set, was shown by [11] not to have such algorithms, unless CNF Satisfiablity has an O\lparen2δn\rparen time algorithm for some δ<1, which is an important open problem. Second, we can express the problems in [1] by a logic that is (conjectured to be) a proper subclass of that of [3] problems. This means that putting a problem in [1] decreases the descriptive complexity of the problem.

It is easy to see that p-WCSP restricted to some finite family of Boolean relations (implying the arity of relations is bounded) is in \W[1]. Notice that listing the tuples of all relations in the input adds just a constant to the size of input. Thus, uniform and nonuniform CSP in this case have the same complexity. These problems are studied by Marx [8], where he provides a dichotomy: If the family of relations has a property that he calls weak-separability, then the problem is fixed-parameter tractable (like p-Vertex-Cover), otherwise it is \W[1]-complete (like p-Clique). This result is extended by Bulatov and Marx [1] to any finite domain.

For the basic concepts, definitions and notation of the parameterized complexity theory, we refer the reader to [6].

2 A Machine Characterization of [1]

We use a nondeterministic random access machine model. It is based on a standard deterministic random access machine (RAM) model. Registers store nonnegative integers. Register 0 is the accumulator. The arithmetic operations are addition, subtraction (cut off at 0), and division by two (rounded off), and we use a uniform cost measure. For more details see [6]. We define a nondeterministic RAM, or NRAM, to be a RAM with an additional instruction “GUESS” whose semantics is:

Acceptance of an input by an NRAM program is defined as usually for non-deterministic machines. Steps of a computation of an NRAM that execute a GUESS instruction are called nonde terministic steps.

Let κ:Σ∗→N be a parameterization. An NRAM program P is κ-restricted if there are computable functions f and g and a polynomial p\lparenX\rparen such that on every run with input x∈Σ∗ the program P

A κ-restricted NRAM program P is tail-nondeterministic if there is a computable function h such that for every run of P on any input x all nondeterministic steps are among the last h\lparenκ\lparenx\rparen\rparen steps of the computation.

The machine characterization of \W[1] reads as follows:

Because our domain is Boolean, henceforth we characterize an assignment with its support set, that is the set of variables that are mapped to 1.

The main idea of the proof of Theorem 3.4 is the following lemma.

And a variant of the above:

Adapt the proof of the backward direction of Lemma 3.2, by adding the requirement that Z⊇Q. ∎

Our containment theorem reads as follows:

We give a tail-nondeterministic κ-restricted NRAM program Q deciding the problem. The result follows by Theorem 2.3. Let I be the given instance with the set of variables V and the parameter value k. Program Q first constructs Instance I′ from Instance I as described above. This can easily be done in polynomial time. Let

and LT,S\lparenU\rparen\colonequals0 otherwise. The number of keys stored in Trie 1 and Trie 2 is bounded by a fixed polynomial in n (size of I) and the stored values are of polynomial size. To verify this, remember that for each relation in I, all the tuples in the relation are listed in the input. Thus RS\lparenS\rparen has at most n satisfying assignments, for all S∈S. It follows that the summation in the recursive definition (3) has at most n summands, and moreover, |T| is bounded by a fixed polynomial in n.

The tries are arranged such that for all T,U⊂V of size |T|,|U|≤k, the queries for d[T] and l[T,U] is answered in O\lparen2k\rparen time (a general property of the trie data structure), and for nonexistent keys 0 is returned. The tries can easily be computed in polynomial time.

Now the nondeterministic part of the computation starts: Program Q guesses k variables in V and checks it they are distinct. Let B be the set of k variables. Then Q iterates over subsets T⊆B, and if d[T]>0, checks if

The summation in Check (4) has at most 22k summands, thus Program Q is tail-nondeterministic.

We should show now that Q actually decides p-WCSP. By construction, I and I′ have the same set of satisfying assignments of size ≤k. Thus, it is enough to prove, that on a computation branch of Program Q, where the set of guessed variables B is of size |B|=k, the following four statements are equivalent:

The equivalence of the first three statements should be evident. The rest of the proof is to show that the third and forth statements are equivalent.

Let T∈T and T⊆B. There are two possibilities handled by the two claims below.

Suppose either RS\lparenS|T,B\rparen is empty or it it has a maximum with respect to set inclusion, for all S∈DT. Then (5) holds for T if and only if Check (4) is passed for T.

We rewrite the summation in (4) as

To complete the proof, we show that the inner summation (as a function of S) is the indicator function for the statement RS\lparenS|T,B∩S\rparen≠∅. That is, for all S∈DT,

In the second case, the summation is empty, thus it sums to 0. In the first case, by hypothesis, the set RS\lparenS|T,B∩S\rparen has a maximum, U, with respect to inclusion. Thus, we have

Next, we show that if T does not satisfy the hypothesis of Claim 1, then there is T′∈T that satisfies the hypothesis, and (5) does not hold for T′. Thus, by Claim 1, Check (4) fails for T′, as desired.

Suppose RS\lparenS|T,B∩S\rparen is not empty and it does not have a maximum, for some S∈DT. Then there is a T′∈T such that T′⊆B and

The author thanks Johannes Köbler and Frank Fuhlbrück for helpful discussions.