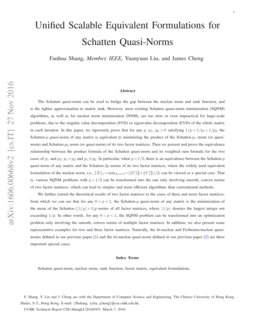 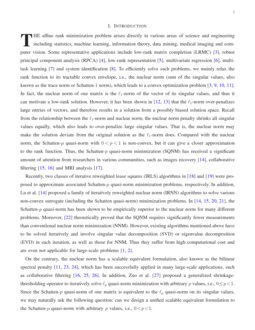 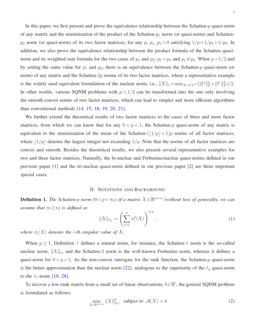 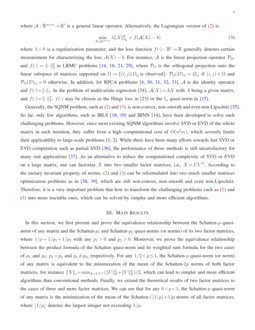 [4], low-rank representation [5], multivariate regression [6], multi-task learning [7] and system identification [8]. To efficiently solve such problems, we mainly relax the rank function to its tractable convex envelope, i.e., the nuclear norm (sum of the singular values, also known as the trace norm or Schatten-1 norm), which leads to a convex optimization problem [3, 9, 10, 11]. In fact, the nuclear norm of one matrix is the ℓ1

-norm of the vector of its singular values, and thus it can motivate a low-rank solution. However, it has been shown in

[12, 13] that the ℓ1-norm over-penalizes large entries of vectors, and therefore results in a solution from a possibly biased solution space. Recall from the relationship between the ℓ1-norm and nuclear norm, the nuclear norm penalty shrinks all singular values equally, which also leads to over-penalize large singular values. That is, the nuclear norm may make the solution deviate from the original solution as the ℓ1-norm does. Compared with the nuclear norm, the Schatten-p quasi-norm with 0<p<1 is non-convex, but it can give a closer approximation to the rank function. Thus, the Schatten-p quasi-norm minimization (SQNM) has received a significant amount of attention from researchers in various communities, such as images recovery [14], collaborative filtering [15, 16] and MRI analysis [17].

Recently, two classes of iterative reweighted lease squares (IRLS) algorithms in [18] and [19] were proposed to approximate associated Schatten-p quasi-norm minimization problems, respectively. In addition, Lu et al. [14] proposed a family of iteratively reweighted nuclear norm (IRNN) algorithms to solve various non-convex surrogate (including the Schatten quasi-norm) minimization problems. In [14, 15, 20, 21], the Schatten-p quasi-norm has been shown to be empirically superior to the nuclear norm for many different problems. Moreover, [22] theoretically proved that the SQNM requires significantly fewer measurements than conventional nuclear norm minimization (NNM). However, existing algorithms mentioned above have to be solved iteratively and involve singular value decomposition (SVD) or eigenvalue decomposition (EVD) in each iteration, as well as those for NNM. Thus they suffer from high computational cost and are even not applicable for large-scale problems [1, 2].

On the contrary, the nuclear norm has a scalable equivalent formulation, also known as the bilinear spectral penalty [11, 23, 24], which has been successfully applied in many large-scale applications, such as collaborative filtering [16, 25, 26]. In addition, Zuo et al. [27] proposed a generalized shrinkage-thresholding operator to iteratively solve ℓp quasi-norm minimization with arbitrary p values, i.e., 0≤p<1. Since the Schatten-p quasi-norm of one matrix is equivalent to the ℓp quasi-norm on its singular values, we may naturally ask the following question: can we design a unified scalable equivalent formulation to the Schatten-p quasi-norm with arbitrary p values, i.e., 0<p<1.

In this paper, we first present and prove the equivalence relationship between the Schatten-p quasi-norm of any matrix and the minimization of the product of the Schatten-p1 norm (or quasi-norm) and Schatten-p2 norm (or quasi-norm) of its two factor matrices, for any p, p1, p2>0 satisfying 1/p=1/p1+1/p2. In addition, we also prove the equivalence relationship between the product formula of the Schatten quasi-norm and its weighted sum formula for the two cases of p1 and p2: p1=p2 and p1≠p2. When p>1/2 and by setting the same value for p1 and p2, there is an equivalence between the Schatten-p quasi-norm (or norm) of any matrix and the Schatten-2p norms of its two factor matrices, where a representative example is the widely used equivalent formulation of the nuclear norm, i.e., ∥X∥∗=minX=UVT(∥U∥2F+∥V∥2F)/2. In other worlds, various SQNM problems with p>1/2 can be transformed into the one only involving the smooth convex norms of two factor matrices, which can lead to simpler and more efficient algorithms than conventional methods [14, 15, 18, 19, 20, 21].

We further extend the theoretical results of two factor matrices to the cases of three and more factor matrices, from which we can know that for any 0<p<1, the Schatten-p quasi-norm of any matrix is equivalent to the minimization of the mean of the Schatten-(⌊1/p⌋+1)p norms of all factor matrices, where ⌊1/p⌋ denotes the largest integer not exceeding 1/p. Note that the norms of all factor matrices are convex and smooth. Besides the theoretical results, we also present several representative examples for two and three factor matrices. Naturally, the bi-nuclear and Frobenius/nuclear quasi-norms defined in our previous paper [1] and the tri-nuclear quasi-norm defined in our previous paper [2] are three important special cases.

The Schatten-p norm (0<p<∞) of a matrix X∈Rm×n (without loss of generality, we can assume that m≥n) is defined as

where σi(X) denotes the i-th singular value of X.

To recover a low-rank matrix from a small set of linear observations, b∈Rl, the general SQNM problem is formulated as follows:

where A:Rm×n→Rl is a general linear operator. Alternatively, the Lagrangian version of (2) is

is a regularization parameter, and the loss function

Generally, the SQNM problem, such as (2) and (3), is non-convex, non-smooth and even non-Lipschitz [35]. So far, only few algorithms, such as IRLS [18, 19] and IRNN [14], have been developed to solve such challenging problems. However, since most existing SQNM algorithms involve SVD or EVD of the whole matrix in each iteration, they suffer from a high computational cost of O(n2m), which severely limits their applicability to large-scale problems [1, 2]. While there have been many efforts towards fast SVD or EVD computation such as partial SVD [36], the performance of those methods is still unsatisfactory for many real applications [37]. As an alternative to reduce the computational complexity of SVD or EVD on a large matrix, one can factorize X into two smaller factor matrices, i.e., X=UVT. According to the unitary invariant property of norms, (2) and (3) can be reformulated into two much smaller matrices optimization problems as in [38, 39], which are still non-convex, non-smooth and even non-Lipschitz. Therefore, it is a very important problem that how to transform the challenging problems such as (2) and (3) into more tractable ones, which can be solved by simpler and more efficient algorithms.

First, we discuss the case when p1=p2. In fact, for any given 0<p≤1, there exist infinitely many pairs of positive numbers p1 and p2 satisfying 1/p1+1/p2=1/p, such that the equality (4) holds. By setting the same value for p1 and p2, i.e., p1=p2=2p, we give a unified scalable equivalent formulation for the Schatten-p quasi-norm (or norm) as follows.

The detailed proof of Theorem 2 is provided in Section IV-B. From the second equality in (5), we know that, for any 0<p≤1, the Schatten-p quasi-norm (or norm) minimization problems in many low-rank matrix completion and recovery applications can be transformed into the one of minimizing the mean of the Schatten-2p norms (or quasi-norms) of both much smaller factor matrices. We note that when 1/2<p≤1, the norms of both much smaller factor matrices are convex and smooth (see Example 2 below) due to 2p>1, which can lead to simpler and more efficient algorithms than conventional methods [14, 15, 18, 19, 20, 21].

When p=1 and p1=p2=2, the equalities in Theorem 2 become the following forms.

Given any matrix X∈Rm×n with rank(X)=r≤d, the following equalities hold:

The bilinear spectral penalty in the second equality of (6) has been widely used in many low-rank matrix completion and recovery problems, such as collaborative filtering [11, 23], RPCA [40], online RPCA [41], and image recovery [42]. Note that the well-known equivalent formulations of the nuclear norm in Corollary 1 are just a special case of Theorem 2, i.e., p=1 and p1=p2=2. In the following, we give two more representative examples for the case of p1=p2.

Due to the basic inequality xy≤(x+y2)2 for any real numbers x and y, we obtain

Due to the basic inequality xy≤x2+y22 for any real numbers x and y, then

Together with the constraint X=UVT, thus we have the following property.

The detailed proof of Theorem 3 is given in Section IV-C. From Theorem 3, we know that Theorem 2 and Corollary 1 can be viewed as two special cases of Theorem 3, i.e., p1=p2=2p and p1=p2=2, respectively. That is, Theorem 3 is the more general form of Theorem 2 and Corollary 1. From the second equality in (9), we can see that, for any 0<p≤1, the Schatten-p quasi-norm (or norm) minimization problem can be transformed into the one of minimizing the weighted sum of the Schatten-p1 norm (or quasi-norm) and Schatten-p2 norm (or quasi-norm) of two much smaller factor matrices (see Example 3 and Example 4 below), where the weights of the two terms in the second equality of (9) are p2/(p1+p2) and p1/(p1+p2), respectively.

In the following, we give two representative examples for the case of p1≠p2.

In addition, we have

Therefore, together with the constraint X=UVT, we have the following property [1].

In our previous paper [1], the scalable formulations in the above equalities are known as the Frobenius/nuclear hybrid quasi-norm. It is clear that the Frobenius/nuclear hybrid quasi-norm is also a special case of Theorem 3, i.e., p=2/3, p1=1 and p2=2. As shown in the above representative examples and our previous papers [1, 2], we can design more efficient algorithms to solve the Schatten-p quasi-norm with 1/2≤p<1 than conventional methods [14, 15, 18, 19, 20, 21].

where the inequality a≤

holds due to the familiar inequality of arithmetic and geometric means, and the inequality

b≤ follows from the Jensen’s inequality for the concave function g(x)=x1/2.

With the constraint X=UVT, thus we have the following property.

The proof of Theorem 5 is very similar to that of Theorem 4 and is thus omitted. From Theorem 5, we can know that for any 0<p≤1 and pi>0 for all i=1,2,…,M, satisfying ∑Mi=11/pi=1/p, the Schatten-p quasi-norm (or norm) of any matrix is equivalent to the minimization of the weighted sum of the Schatten-pi norm (or quasi-norm) of each much smaller factor matrix, where the weights for these terms are p/pi for all i=1,2,…,M.

The detailed proof of Corollary 2 is provided in Section IV-E. From the second equality in (14), we know that, for any 0<p<1, various Schatten-p quasi-norm minimization problems in many low-rank matrix completion and recovery applications can be transformed into the problem of minimizing the mean of the Schatten-3p norms (or quasi-norms) of three much smaller factor matrices. In addition, we note that when 1/3<p≤1, the norms of the three factor matrices are convex and smooth due to 3p>1, which can also lead to some simpler and more efficient algorithms than conventional methods.

Example 5: In the following, we give a representative example. When p=1/3 and p1=p2=p3=1, the equalities in Corollary 2 become the following forms [2].

For any matrix X∈Rm×n of rank(X)=r≤d, then the following equalities hold:

From Property 5, we can see that the tri-nuclear quasi-norm defined in our previous paper [2] is also a special case of Corollary 2.

In this section, we give the detailed proofs for some important theorems and corollaries. We first introduce several important inequalities, such as the Jensen’s inequality, Hölder’s inequality and Young’s inequality, that we use throughout our proofs.

with equality iff there is a constant c≠0 such that each xpi=cyqi.

Before giving a complete proof for Theorem 1, we first present and prove the following lemma.

which means that the inequality (21) is still satisfied. This completes the proof. ∎