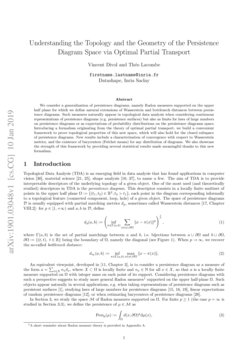 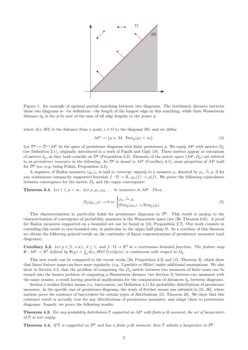 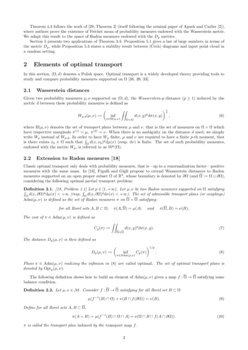 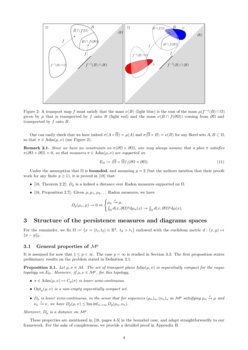 [30], material science [21, 25], shape analysis [10, 37], to name a few. The aim of TDA is to provide interpretable descriptors of the underlying topology of a given object. One of the most used (and theoretically studied) descriptors in TDA is the persistence diagram. This descriptor consists in a locally finite multiset of points in the upper half plane Ω\vcentcolon={(t1,t2)∈R2,t2>t1}, each point in the diagram corresponding informally to a topological feature (connected component, loop, hole) of a given object. The space of persistence diagrams D is usually equipped with partial matching metrics dp, sometimes called Wasserstein distances [17, Chapter VIII.2]: for p∈[1,+∞) and a,b in D, define

where Γ(a,b) is the set of partial matchings between a and b, i.e. bijections between a∪∂Ω and b∪∂Ω, ∂Ω\vcentcolon={(t,t), t∈R} being the boundary of Ω, namely the diagonal (see Figure 1). When p→∞, we recover the so-called bottleneck distance:

, or when estimating barycenters of persistence diagrams

In Section 3, we study the space M of Radon measures supported on Ω. For finite p≥1 (the case p=∞ is studied in Section 3.3), we define the persistence of μ∈M as

where d(x,∂Ω) is the distance from a point x∈Ω to the diagonal ∂Ω, and we define

Let Dp\vcentcolon=D∩Mp be the space of persistence diagrams with finite persistence p. We equip Mp with metrics Dp (see Definition 2.1), originally introduced in a work of Figalli and Gigli [18]. These metrics appear as extensions of metrics dp, as they both coincide on Dp (Proposition 3.2). Elements of the metric space (Mp,Dp) are referred to as persistence measures in the following. As Dp is closed in Mp (Corollary 3.1), most properties of Mp hold for Dp too (e.g. being Polish, Proposition 3.3).

A sequence of Radon measures (μn)n is said to converge vaguely to a measure μ, denoted by μnv→μ, if for any continuous compactly supported function f:Ω→R, μn(f)→μ(f). We prove the following equivalence between convergence for the metric Dp and the vague convergence:

This characterization in particular holds for persistence diagrams in Dp. This result is analog to the characterization of convergence of probability measures in the Wasserstein space (see [39, Theorem 6.9]). A proof for Radon measures supported on a bounded set can be found in [18, Proposition 2.7]. Our work consists in extending this result to non-bounded sets, in particular to the upper half plane Ω. As a corollary of this theorem, we obtain the following general result on the continuity of linear representations of persistence measures (and diagrams).

This new result can be compared to the recent works [26, Proposition 3.2] and [15, Theorem 3], which show that linear feature maps can have more regularity (e.g. Lipschitz or Hölder) under additional assumptions. We also show in Section 3.2, that the problem of computing the Dp metric between two measures of finite mass can be turned into the known problem of computing a Wasserstein distance (see Section 2) between two measures with the same masses, a result having practical implications for the computation of distances dp between diagrams.

For any probability distribution P supported on Mp with finite p

-th moment, the set of barycenters of

P is not empty.

If P is supported on Dp and has a finite p-th moment, then P admits a barycenter in Dp.

Section 5 presents two applications of Theorem 3.4: Proposition 5.1 gives a law of large numbers in terms of the metric Dp, while Proposition 5.3 states a stability result between (Čech) diagrams and input point cloud in a random setting.

In this section, (Ω,d) denotes a Polish space. Optimal transport is a widely developed theory providing tools to study and compare probability measures supported on Ω [38, 39, 33].

where Π(μ,ν) denotes the set of transport plans between μ and ν, that is the set of measures on Ω×Ω which have respective marginals π(1)=μ, π(2)=ν. When there is no ambiguity on the distance d used, we simply write Wp instead of Wp,d. In order to have Wp finite, μ and ν are required to have a finite p-th moment, that is there exists x0∈Ω such that ∫Ωd(x,x0)pdμ(x) (resp. dν) is finite. The set of such probability measures, endowed with the metric Wp, is referred to as Wp(Ω).

Classic optimal transport only deals with probability measures, that is—up to a renormalization factor—positive measures with the same mass. In [18], Figalli and Gigli propose to extend Wasserstein distances to Radon measures supported on an open proper subset Ω of Rd, whose boundary is denoted by ∂Ω (and ¯¯¯¯Ω\vcentcolon=Ω⊔∂Ω), considering the following optimal partial transport problem:

The distance Dp(μ,ν) is then defined as

Plans π∈Adm(μ,ν) realizing the infimum in (8) are called optimal. The set of optimal transport plans is denoted by Optp(μ,ν).

The following definition shows how to build an element of Adm(μ,ν) given a map f:¯¯¯¯Ω→¯¯¯¯Ω satisfying some balance condition.

Since we have no constraints on π(∂Ω×∂Ω), one may always assume that a plan π satisfies π(∂Ω×∂Ω)=0, so that measures π∈Adm(μ,ν) are supported on

Under the assumption that Ω is bounded, and assuming p=2 (but the authors mention that their proofs work for any finite p≥1), it is proved in [18] that:

3 Structure of the persistence measures and diagrams spaces

It is assumed for now that 1≤p<∞. The case p=∞ is studied in Section 3.3. The first proposition states preliminary results on the problem stated in Definition 2.1.

Let μ,ν∈M. The set of transport plans Adm(μ,ν) is sequentially compact for the vague topology on EΩ. Moreover, if μ,ν∈Mp, for this topology,

Moreover, Dp is a distance on Mp.

These properties are mentioned in [18, pages 4-5] in the bounded case, and adapt straightforwardly to our framework. For the sake of completeness, we provide a detailed proof in Appendix B.

If a (Borel) measure μ satisfies Persp(μ)<∞, then for any Borel set A⊂Ω satisfying d(A,∂Ω)\vcentcolon=infx∈Ad(x,∂Ω)>0, we have:

so that μ(A)<∞. In particular, μ is automatically a Radon measure.

The following lemma gives a simple way to approximate a persistence measure (resp. diagram) with ones of finite masses.

Let π∈Adm(μ,μ(r)) be the transport plan induced by the identity map on ¯¯¯¯Ω∖Ar, and the projection onto ∂Ω on Ar. As π is sub-optimal, one has:

The following proposition is central in our work: it shows that the metrics Dp are extensions of the metrics dp.

Let a,b∈Dp be two persistence diagrams. The case where a,b have a finite number of points is already treated in [28, Proposition 1].

The space (Mp,Dp) is a Polish space.

As for Proposition 3.1, this proposition appears in [18, Proposition 2.7] in the bounded case, and its proof is straightforwardly adapted to our framework. For the sake of completeness, we provide a detailed proof in Appendix B.

We now state one of our main result: a characterization of convergence in (Mp,Dp).

This result is analog to the characterization of convergence of probability measures in the Wasserstein space (see [39, Theorem 6.9]) and can be found in [18, Proposition 2.7] in the case where the ground space is bounded. While the proof of the direct implication can be adapted (it can be found in Appendix B), a new proof is needed for the converse implication.

Proof of the converse implication.

Let μ,μ1,μ2… be elements of Mp and assume that μnv→μ and Persp(μn)→Persp(μ). Since Dp(μn,μ)≤Dp(μn,0)+Dp(μ,0), the sequence (Dp(μn,μ))n is bounded. Thus, if we show that (Dp(μn,μ))n admits 0 as an unique accumulation point, then the convergence holds. Up to extracting a subsequence, we may assume that (Dp(μn,μ))n converges to some limit. Let (πn)n∈Opt(μn,μ)N be corresponding optimal transport plans. The vague convergence of (μn)n, together with Proposition A.1, imply that (πn)n is relatively compact with respect to the vague convergence on EΩ. Let π be the limit of any converging subsequence of (πn)n, which indexes are still denoted by n. As μnv→μ, standard arguments of optimal transport theory assert that π is necessarily in Optp(μ,μ) (see [18, Proposition 2.3]), i.e. π is supported on {(x,x),x∈Ω}. The vague convergence of (μn)n and the convergence of (Persp(μn))n to Persp(μ) imply that for a given compact set K⊂Ω, whose complementary set in Ω is denoted by Kc and interior set is denoted by ˚K, we have

Therefore, for ε>0, there exists some compact set K⊂Ω, with

For some compact set K⊂Ω, consider the following transport plan ~πn (consider informally that what went from K to Kc and from Kc to K is now transported onto the diagonal, while everything else is unchanged):

Finally, we have proven that (Dp(μn,μ))n is bounded and that for any converging subsequence, limkDp(μnk,μ)=0. It follows that Dp(μn,μ)→0. ∎

The assumption Persp(μn)→Persp(μ) is crucial to obtain Dp-convergence assuming vague convergence. For example, the sequence defined by μn\vcentcolon=δ(n,n+1) converges vaguely to μ=0 and (Persp(μn))n does converge (as it is constant equal to √22), while Dp(μn,0)↛0. This does not contradict Theorem 3.4 since Persp(μ)=0≠√22=limnPersp(μn).

The direct implication of Theorem 3.4 implies in particular that the topology of the metric Dp is stronger than the vague topology. As a consequence, the following corollary holds, using Proposition A.5 (Dp is closed in Mp for the vague convergence).

Dp is closed in Mp for the metric Dp.

We recover in particular that the space (Dp,dp) is a Polish space (Proposition 3.3), a result already proved in [31, Theorems 7 and 12] with a different approach.

For a persistence measure μ∈Mp, let μp be the measure (with finite mass) defined by

In particular, if f:Ω→Rd is a continuous bounded function, then the feature map Φ:Mp→Rd defined by Φ:μ↦μp(f)=∫Ωd(x,∂Ω)pf(x)dμ(x) is continuous with respect to Dp.

We end this section with a characterization of relatively compact sets in (Mp,Dp).

This characterization is equivalent to the one described in [31, Theorem 21] for persistence diagrams. The notions introduces by the authors of off-diagonally birth-death boundedness, and uniformness are rephrased using the notion of tightness, standard in measure theory.

3.2 Persistence measures in the finite setting

In practice, many statistical results regarding persistence diagrams are stated for sets of diagrams with uniformly bounded number of points [27, 9], and the specific properties of Dp in this setting are therefore of interest. Introduce for m≥0 the subset Mp≤m of Mp defined as Mp≤m\vcentcolon={μ∈Mp, μ(Ω)≤m}, and the set Mpf of finite persistence measures, Mpf\vcentcolon=⋃m≥0Mp≤m. Define similarly the set D≤m (resp. Df).

Mpf (resp Df) is dense in Mp (resp Dp) for the metric Dp.

This is a straightforward consequence of Lemma 3.1. ∎

It is straightforward to check that ρ is a distance on ~Ω and that (~Ω,ρ) is a Polish space. One can then define the Wasserstein distance Wp,ρ with respect to ρ for finite measures on ~Ω which have the same masses, that is the infimum of ~Cp(~π)\vcentcolon=∬~Ω2ρ(x,y)pd~π(x,y), for ~π a transport plan with corresponding marginals (see Section 2.1). The following theorem states that computing the Dp metric between two persistence measures with finite masses can be turn into computing the Wasserstein distances between two measures supported on ~Ω with the same (finite) masses.