Understanding the Impact of On-chip Communication on DNN Accelerator Performance

Deep Neural Networks have flourished at an unprecedented pace in recent years. They have achieved outstanding accuracy in fields such as computer vision, natural language processing, medicine or economics. Specifically, Convolutional Neural Networks (CNN) are particularly suited to object recognition or identification tasks. This, however, comes at a high computational cost, prompting the use of specialized GPU architectures or even ASICs to achieve high speeds and energy efficiency. ASIC accelerators streamline the execution of certain dataflows amenable to CNN computation that imply the constant movement of large amounts of data, thereby turning on-chip communication into a critical function within the accelerator. This paper studies the communication flows within CNN inference accelerators of edge devices, with the aim to justify current and future decisions in the design of the on-chip networks that interconnect their processing elements. Leveraging this analysis, we then qualitatively discuss the potential impact of introducing the novel paradigm of wireless on-chip network in this context. 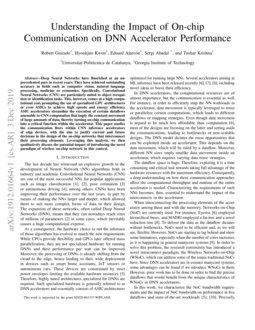 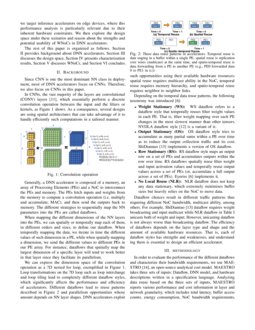 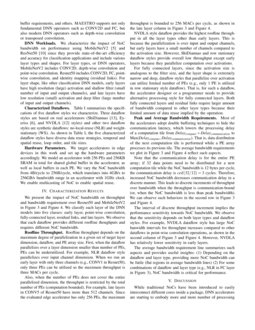 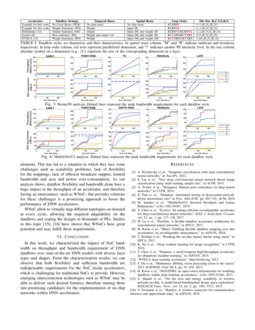 A Survey on Silicon Photonics for Deep Learning

The last decade has witnessed an explosive growth in the development of Neural Network (NN) algorithms both in industry and academia. Convolutional Neural Networks (CNN) are one of the most successful NNs for popular applications such as image classification [krizhevsky2012imagenet, vgg]

[vision] or autonomous driving [tian2018deeptest], among others. CNNs have been improving their performance over the last years, in part by means of making the NNs larger and deeper, which allowed them to suit more complex forms of data in their design. The expansion of these networks, often called Deep Neural Networks (DNN), means that they can nowadays reach sizes of millions of parameters [vgg] in some cases, which inevitably causes a huge computational expense.

As a consequence, the hardware choice to run the inference of those algorithms has evolved to match the new requirements. While CPUs provide flexibility and GPUs later offered mass parallelization, they are not specialized hardware for running DNNs and their performance per watt can be improved. Moreover, the processing of DNNs is already shifting from the cloud to the edge, hence leading to their wide deployment in devices such as smart home assistants, IoT sensors or autonomous cars. These devices are constrained by strict power envelopes limiting the available hardware resources [mobilenetv2]. Therefore, highly tuned architectures specialized for DNNs are required. Such specialized hardware is generally referred to as DNN accelerators and essentially consists of ASIC architectures optimized for running large NNs. Several accelerators aiming at ML inference have been released recently [eyeriss, flexflow, maeri], including novel ideas to boost their efficiency.

In DNN accelerators, the computational resources are of utmost importance, but the communication is essential as well. For instance, in order to efficiently map the NN workloads in the accelerator, data movement is typically leveraged to reuse or parallelize certain computations, which leads to different dataflows or mapping strategies. Even though data movement is argued to be much less affordable than computation [eyeriss], most of the designs are focusing on the latter and setting aside the communications, leading to bottlenecks or non-scalable designs. The DNN model dictates the reuse opportunities that can be exploited inside an accelerator. This depends on the data movement, which will be ruled by a dataflow. Moreover, different NN sizes imply unalike data movement inside an accelerator, which requires varying data reuse strategies.

The dataflow space is huge. Therefore, exploring it is a time consuming and critical task towards taking full advantage of the hardware resources with the maximum efficiency. Consequently, a deep understanding on how these communication approaches affect the computational throughput and runtime of the entire accelerator is needed. Characterizing the requirements of such NNs becomes, then, essential to understand the impact of the interconnects in the accelerator.

When interconnecting the processing elements of the accelerator among them and with the memory, Networks-on-Chip (NoC) are currently used. For instance, Eyeriss [eyeriss] employed hierarchical buses, and MAERI employed a fat-tree and a novel reduction tree [maeri]. To deliver the data as the dataflow dictates without bottlenecks, NoCs need to be efficient and, as we will see, flexible. However, NoCs are starting to lag behind and show some limitations, especially when the number of cores increases, as it is happening in general manycore systems [krishna2013breaking]. In order to solve this problem, the research community has introduced a novel interconnect paradigm, the Wireless Networks-on-Chip (WNoC), which can address some of the issues traditional NoCs have. Since DNN accelerators are in essence manycore systems, some advantages can be found if we introduce WNoCs in them. However, prior work has to be done in order to find the precise dataflows that would benefit from the unique characteristics of WNoCs in DNN accelerators.

In this work, we characterize the NoC bandwidth requirements and the impact of NoC bandwidth on performance in five dataflows and state-of-the-art workloads [mobilenetv2, resnet]. Precisely, we target inference accelerators on edge devices, where this performance analysis is particularly relevant due to their inherent hardware constraints. We then explore the design space under these scenarios and reason about the strengths and potential usability of WNoCs in DNN accelerators.

Since CNN is one the most dominant NN class in deployment, most of DNN accelerators focus on CNNs. Therefore, we also focus on CNNs in this paper.

In CNNs, the vast majority of the layers are convolutional (CONV) layers [diannao], which essentially perform a discrete convolution operation between the input and the filters or kernels, as Figure 1 shows. As a consequence, several designs are using spatial architectures that can take advantage of it to handle efficiently such computations in a tailored manner.

Generally, a DNN accelerator is composed of a memory, an array of Processing Elements (PEs) and a NoC to interconnect the PEs and memory. The PEs fetch inputs and weights from the memory to compute a convolution operation (i.e. multiply and accumulate, MAC), and then send the outputs back to memory. The different strategies to sequentially map the NN parameters into the PEs are called dataflows.

We can express the dimension space of the convolution operation as a 7D nested for loop, exemplified in Figure 1. Loop transformations on the 7D loop such as loop interchange and loop tiling lead to completely different dataflow styles, which significantly affects the performance and efficiency of accelerators. Different dataflows lead to reuse patterns described in Figure 2 and parallelism opportunities whose amount depends on NN layer shapes. DNN accelerators exploit such opportunities using their available hardware resources: spatial reuse requires multicast ability in the NoC, temporal reuse requires memory hierarchy, and spatio-temporal reuse requires neighbor to neighbor links.

Depending on the temporal data reuse patterns, the following taxonomy was introduced[eyeriss]:

Dataflow choices result in different traffic patterns thus requiring different NoC bandwidth, multicast ability, among others. For example, ShiDiannao [shidiannao] dataflow requires weight broadcasting and input multicast while NLR dataflow in Table I unicasts both of weight and input. However, unicasting dataflow is not always worse than broadcasting dataflow. The efficiency of dataflows depends on the layer type and shape and the amount of available hardware resources. That is, each of dataflow styles has strengths and weaknesses, and understanding them is essential to design an efficient accelerator.

In order to evaluate the performance of the different dataflows and characterize their bandwidth requirements, we use MAESTRO [maestro]

Hardware Parameters. We target accelerators in edge devices in this work and set up the hardware parameters accordingly. We model an accelerator with 256 PEs and 256KB SRAM in total for shared global buffer in the accelerator, as well as local buffers in each PE. We vary the NoC bandwidth from 4B/cycle to 256B/cycle, which translates into 4GB/s to 256GB/s bandwidth range in an accelerator with 1GHz clock. We enable multicasting of NoC to enable spatial reuse.

Roofline Throughput. Roofline throughput depends on the maximum degree of parallelization in a given set of target layer dimension, dataflow, and PE array size. First, when the dataflow parallelizes over a layer dimension smaller than number of PEs, PEs can be underutilized. For example, NLR dataflow style parallelizes over input channel dimension. When we run an early layer with only three channels (e.g., CONV1 in Resnet50), only three PEs can be utilized so the maximum throughput is three MACs per cycle.

Also, when the number of PEs does not cover the entire parallelized dimension, the throughput is restricted by the total number of PEs (computation bounded). For example, late layers in CONV5 of Resnet50 have more than 512 channels. Since the evaluated edge accelerator has only 256 PEs, the maximum throughput is bounded to 256 MACs per cycle, as shown in the late layer column in Figure 3 and Figure 4.

NVDLA style dataflow provides the highest roofline throughput in all the layer types other than early layers. This is because the parallelization is over input and output channels, but early layers have a small number of channels compared to the activation size. However, ShiDiannao and row stationary dataflow styles provide overall low throughput except early layers because they parallelize computation over activations.

For fully connected layers, since the activation size is analogous to the filter size, and the layer shape is extremely narrow and deep, dataflow styles that parallelize over activation can utilize limited number of PEs (e.g., only 1 PE is utilized in row stationary style dataflow). That is, for such a dataflow, the accelerator designer or a programmer needs to provide alternative processing style for fully connected layers. Both fully connected layers and residual links require larger amount of bandwidth compared to other layer types because their limited amount of data reuse implied by the operation.

Peak and Average Bandwidth Requirements. Most of the accelerators adopt double buffering techniques to hide the communication latency, which lowers the processing delay of a computation tile from Delaycompute+Delaycommunication to Max(Delaycompute,Delaycommunication). That is, data distribution of the next computation tile is performed while a PE array processes its previous tile. The average bandwidth requirements we plot in Figure 3 and Figure 4 reflect such aspects.

The interval of discrete throughput increment implies the performance sensitivity towards NoC bandwidth. We observe that the sensitivity depends on both layer types and dataflow styles. For example, NVDLA dataflow style has large NoC banwidth intervals for throughput increases compared to other dataflows in point-wise convolution operations, as shown in the second column of Figure 3 and Figure 4. However, NVDLA has relatively lower sensitivity in early layers.

While traditional NoCs have been introduced to easily interconnect different cores inside a package, DNN accelerators are starting to embody more and more number of processing elements. This has led to a situation in which they face some challenges such as scalability problems, lack of flexibility for the mappings, lack of efficient broadcast support, limited bandwidth and area and power over-consumption. As our analysis shows, dataflow flexibility and bandwidth alone have a huge impact in the throughput of an accelerator, and therefore having an interconnect -such as WNoC- that provides solutions for these challenges is a promising approach to boost the performance of DNN accelerators.

WNoC allow to virtually map different topologies on-demand at every cycle, allowing the required adaptability on the dataflows and scaling the designs to thousands of PEs. Studies in this topic [onthearea, replica] have shown that WNoCs have great potential and may fulfill these requirements.

In this work, we characterized the impact of NoC bandwidth on throughput and bandwidth requirement of DNN dataflows over state-of-the-art DNN models with diverse layer types and shapes. From the characterization results, we can observe that both flexibility and sufficient bandwidth are indispensable requirements for the NoC inside accelerators, which is challenging for traditional NoCs to provide. However, emerging interconnection technologies such as WNoC may be able to deliver such desired features, therefore turning them into promising candidates for the implementation of on-chip networks within DNN accelerators.