Recent works have highlighted scale invariance or symmetry present in the weight space of a typical deep network and the adverse effect it has on the Euclidean gradient based stochastic gradient descent optimization. In this work, we show that a commonly used deep network, which uses convolution, batch normalization, reLU, max-pooling, and sub-sampling pipeline, possess more complex forms of symmetry arising from scaling-based reparameterization of the network weights. We propose to tackle the issue of the weight space symmetry by constraining the filters to lie on the unit-norm manifold. Consequently, training the network boils down to using stochastic gradient descent updates on the unit-norm manifold. Our empirical evidence based on the MNIST dataset shows that the proposed updates improve the test performance beyond what is achieved with batch normalization and without sacrificing the computational efficiency of the weight updates. 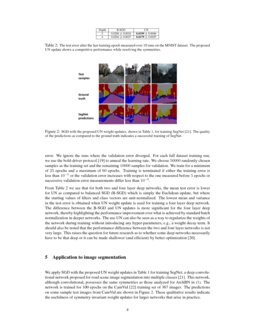 Stochastic gradient descent (SGD) has been the workhorse for optimization of deep networks [1]. The most well-known form uses the Euclidean gradients with a varying learning rate to optimize the weights. In this regard, the recent work [2]

has brought to light scale invariance properties in the weight space which commonly used deep networks possess. These symmetries or invariance to reparameterizations of the weights imply that even though the loss function remains unchanged, the Euclidean gradient varies based on the chosen parameterization. Consequently, optimization trajectories can vary significantly for different reparameterizations

Although these issues have been raised recently, the precursor to these methods is the early work of Amari [3], who proposed the use of natural gradients

to tackle weight space symmetries in neural networks. The idea is to compute the steepest descent direction for the weight update on the manifold defined by these symmetries and use this direction to update the weights

[4, 5, 6, 7]. Most of theses proposals are either computationally expensive to implement or they need modifications to the architecture. On the other hand, optimization over a manifold with symmetries or invariances has been a topic of much research and provides guidance to other simpler metric constructions [8, 9, 10, 11, 12, 13, 14].

In Section 2, our analysis into a commonly used network shows that there exists more complex forms of symmetries which can affect optimization, and hence there is a need to define simpler weight updates which take into account these invariances. Accordingly, in Section 3, we look at one particular way of resolving the symmetries by constraining the filters to lie on the unit-norm manifold. This results from a geometric viewpoint on the manifold of the search space. The proposed updates, shown in Table 1, are symmetry-invariant and are numerically efficient to implement.

The stochastic gradient descent algorithms with the proposed updates are implemented in Matlab and Manopt [15]. The codes are available at http://bamdevmishra.com/codes/deepnetworks.

A two layer deep architecture, ArchBN, is shown in Figure 1

. Each layer in ArchBN has typical components commonly found in convolutional neural networks

max-pooling with stride 2, and sub-sampling. The final layer is a K-way soft-max classifier

θ. The network is trained with a cross-entropy loss. The rows of the weight matrices W1 and W2 correspond to filters in layers 1 and 2, respectively. The dimension of each row corresponds to the input dimension of the layer. For the MNIST digits dataset, the input is a 784

layers to have zero-mean unit variance over each mini-batch. Then a separate and trainable scale and shift is applied to the resulting features to obtain

b1 and b2, respectively. This effectively models the distribution of the features in h1 and h2 as Gaussian whose mean and variance are learnt during training. Empirical results in [17] show that this significantly improves convergence and our experiments also support this claim. A key observation is that the normalization of h1 and h2 allows for complex symmetries to exist in the network. To this end, consider the reparameterizations

where α=Diag(α1,α2,α3,α4,α5,α6,α7,α8) and β=Diag(β1,β2,β3,β4,β5,β6,β7,β8) and the elements of α and β can be any real number. Diag(⋅) is an operator which creates a diagonal matrix with its argument placed along the diagonal. Due to batch normalization which makes h1 and h2 unit-variance, y is unchanged, and hence the loss is invariant to reparameterizations (1) of the weights. Equivalently, there exists continuous symmetries or reparameterizations of W1 and W2, which leave the loss function unchanged. It should be stressed that our analysis differs from [2], where the authors deal with a simpler case of α=α0, β=1α0, and α0 is a non-zero scalar.

An efficient way to resolve the symmetries that exist in ArchBN is to constrain the weight vectors (filters) in W1 and W2 to lie on the oblique manifold [8, 15], i.e., each filter in the fully connected layers is constrained to have unit norm (abbreviated UN). Equivalently, we impose the constraints diag(W1WT1)=1 and diag(W2WT2)=1, where diag(⋅) is an operator which extracts the diagonal elements of the argument matrix. To this end, consider a weight vector w∈Rn with the constraint wTw=1. (For example, wT is a row of W1.) The steepest descent direction for a loss ℓ(w) with w on the unit-norm manifold is computed ~∇ℓ(w)=∇ℓ(w)−(wT∇ℓ(w))w, where ∇ℓ(w) is the Euclidean gradient and ~∇ℓ(w) is the Riemannian gradient on the unit-norm manifold [8, Chapter 3]. Effectively, the normal component of the Euclidean gradient, i.e., (wT∇ℓ(w))w, is subtracted to result in the tangential (to the unit-norm manifold) component. Following the tangential direction takes the update out of the manifold, which is then pulled back to the manifold with a retraction operation [8, Example 4.1.1]. Finally, an update of w on the unit-norm manifold is of the form

where wt is the current weight, wt+1 is the updated weight, ∇ℓ(w) is the Euclidean gradient, and λ is the learning rate. It should be noted that when W1 and W2 are constrained, the θ variable is reparameterization free.

The proposed weight update (2) can be used in a stochastic gradient descent (SGD) setting which we use in our experiments described in the following section. It should be emphasized that the proposed update is numerically efficient to implement. The formulas are shown in Table 1. The convergence analysis of SGD on manifolds follows the developments in [1, 18].

We train both two and four layer deep ArchBN to perform digit classification on the MNIST dataset (60K training and 10K testing images). We use 64 features per layer. The digit images are rasterized into a 784 dimensional vector as input to the network(s). No input pre-processing is performed. The weights in each layer are drawn from a standard Gaussian and each filter is unit-normalized. The class vectors are also drawn from a standard Gaussian and unit-normalized.

From Table 2 we see that for both two and four layer deep networks, the mean test error is lower for UN as compared to balanced SGD (B-SGD) which is simply the Euclidean update, but where the starting values of filters and class vectors are unit-normalized. The lowest mean and variance in the test error is obtained when UN weight update is used for training a four layer deep network. The difference between the B-SGD and UN updates is more significant for the four layer deep network, thereby highlighting the performance improvement over what is achieved by standard batch normalization in deeper networks. The use UN can also be seen as a way to regularize the weights of the network during training without introducing any hyper-parameters, e.g., a weight decay term. It should also be noted that the performance difference between the two and four layer networks is not very large. This raises the question for future research as to whether some deep networks necessarily have to be that deep or it can be made shallower (and efficient) by better optimization [20].

We apply SGD with the proposed UN weight updates in Table 1 for training SegNet, a deep convolutional network proposed for road scene image segmentation into multiple classes [21]. This network, although convolutional, possesses the same symmetries as those analyzed for ArchBN in (1). The network is trained for 100 epochs on the CamVid [22] training set of 367 images. The predictions on some sample test images from CamVid are shown in Figure 2. These qualitative results indicate the usefulness of symmetry-invariant weight updates for larger networks that arise in practice.

We have highlighted the symmetries that exist in the weight space of deep neural network architectures which are currently popular. These symmetries can be absorbed into gradient descent by applying a unit-norm constraint on the filter weights. This takes into account the manifold structure on which the weights of the network reside. The empirical results show the test performance can be improved using our proposed weight update technique on a modern architecture. As a future research direction, we would like to explore other efficient symmetry-invariant weight update techniques and exploit them for deep convolutional neural network used in practical applications.

Bamdev Mishra was supported as an FNRS research fellow (Belgian Fund for Scientific Research). The scientific responsibility rests with its authors.