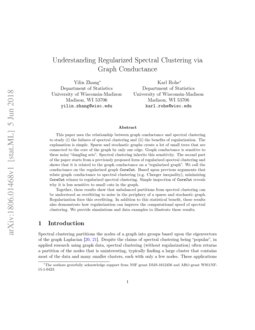 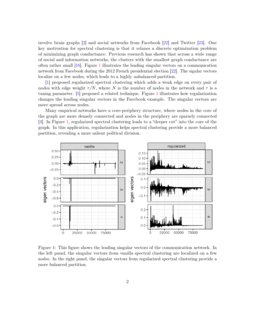 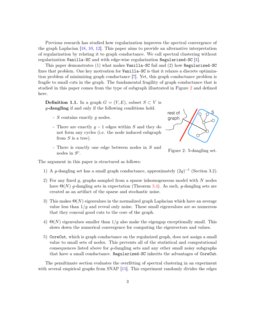 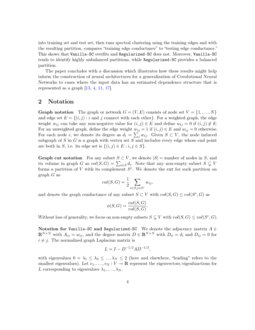 shi2000normalized; von2007tutorial. Despite the claims of spectral clustering being “popular”, in applied research using graph data, spectral clustering (without regularization) often returns a partition of the nodes that is uninteresting, typically finding a large cluster that contains most of the data and many smaller clusters, each with only a few nodes. These applications involve brain graphs binkiewicz2017covariate and social networks from Facebook zhang2017discovering and Twitter zhang2017attention. One key motivation for spectral clustering is that it relaxes a discrete optimization problem of minimizing graph conductance. Previous research has shown that across a wide range of social and information networks, the clusters with the smallest graph conductance are often rather small leskovec2009community. Figure 1

zhang2017discovering. The singular vectors localize on a few nodes, which leads to a highly unbalanced partition.

amini2013pseudo proposed regularized spectral clustering which adds a weak edge on every pair of nodes with edge weight τ/N, where N is the number of nodes in the network and τ is a tuning parameter. chaudhuri2012spectral proposed a related technique. Figure 1 illustrates how regularization changes the leading singular vectors in the Facebook example. The singular vectors are more spread across nodes.

Many empirical networks have a core-periphery structure, where nodes in the core of the graph are more densely connected and nodes in the periphery are sparsely connected borgatti2000models. In Figure 1, regularized spectral clustering leads to a “deeper cut” into the core of the graph. In this application, regularization helps spectral clustering provide a more balanced partition, revealing a more salient political division.

Previous research has studied how regularization improves the spectral convergence of the graph Laplacian qin2013regularized; joseph2016impact; le2015sparse. This paper aims to provide an alternative interpretation of regularization by relating it to graph conductance. We call spectral clustering without regularization Vanilla-SC and with edge-wise regularization Regularized-SC amini2013pseudo.

This paper demonstrates (1) what makes Vanilla-SC fail and (2) how Regularized-SC fixes that problem. One key motivation for Vanilla-SC is that it relaxes a discrete optimization problem of minimizing graph conductance chung1997spectral. Yet, this graph conductance problem is fragile to small cuts in the graph. The fundamental fragility of graph conductance that is studied in this paper comes from the type of subgraph illustrated in Figure 2 and defined here.

In an unweighted graph G=(V,E), subset S⊂V is g-dangling if and only if the following conditions hold.

The argument in this paper is structured as follows:

The penultimate section evaluates the overfitting of spectral clustering in an experiment with several empirical graphs from SNAP snapnets. This experiment randomly divides the edges into training set and test set, then runs spectral clustering using the training edges and with the resulting partition, compares “training edge conductance” to “testing edge conductance.” This shows that Vanilla-SC overfits and Regularized-SC does not. Moreover, Vanilla-SC tends to identify highly unbalanced partitions, while Regularized-SC provides a balanced partition.

The graph or network G=(V,E) consists of node set V={1,…,N} and edge set E={(i,j):i and j connect with each other}. For a weighted graph, the edge weight wij can take any non-negative value for (i,j)∈E and define wij=0 if (i,j)∉E. For an unweighted graph, define the edge weight wij=1 if (i,j)∈E and wij=0 otherwise. For each node i, we denote its degree as di=∑jwij. Given S⊂V, the node induced subgraph of S in G is a graph with vertex set S and includes every edge whose end point are both in S, i.e. its edge set is {(i,j)∈E:i,j∈S}.

For any subset S⊂V, we denote |S|=number of nodes in S, and its volume in graph G as vol(S,G)=∑i∈Sdi. Note that any non-empty subset S⊊V forms a partition of V with its complement Sc. We denote the cut for such partition on graph G as

and denote the graph conductance of any subset S⊂V with vol(S,G)≤vol(Sc,G) as

Without loss of generality, we focus on non-empty subsets S⊊V with vol(S,G)≤vol(Sc,G).

We denote the adjacency matrix A∈RN×N with Aij=wij, and the degree matrix D∈RN×N with Dii=di and Dij=0 for i≠j. The normalized graph Laplacian matrix is

There is a broad class of spectral clustering algorithms which represent each node i in RK with (v1(i),…,vK(i)) and cluster the nodes by clustering their representations in RK with some algorithm. For simplicity, this paper focuses on the setting of K=2 and only uses v2. We refer to Vanilla-SC the algorithm which returns the set Si which solves

This construction of a partition appears in both shi2000normalized and in the proof of Cheeger inequality chung1996laplacians; chung1997spectral, which says that

Edge-wise regularization amini2013pseudo adds τ/N to every element of the adjacency matrix, where τ>0 is a tuning parameter. It replaces A by matrix Aτ∈RN×N, where [Aτ]ij=Aij+τ/N and the node degree matrix D by Dτ, which is computed with the row sums of Aτ (instead of the row sums of A) to get [Dτ]ii=Dii+τ. We define Gτ to be a weighted graph with adjacency matrix Aτ as defined above. Regularized-SC partitions the graph using the K leading eigenvectors of Lτ=I−D−1/2τAτD−1/2τ, which we represent by vτ1,…,vτK:V→R. Similarly, we only use vτ2 when K=2. We refer to Regularized-SC the algorithm which returns the set Si which solves

3 Vanilla-SC and the periphery of sparse and stochastic graphs

For notational simplicity, this section only considers unweighted graphs.

The following fact follows from the definition of a g-dangling set.

To interpret the scale of this graph conductance, imagine that a graph is generated from a Stochastic Blockmodel with two equal-size blocks, where any two nodes from the same block connect with probability

3.2 There are many dangling sets in sparse and stochastic social networks.

We consider random graphs sampled from the following model which generalizes Stochastic Blockmodels. Its key assumption is that edges are independent.

A graph is generated from an inhomogeneous random graph model if the vertex set contains N nodes and all edges are independent. That is, for any two nodes i,j∈V, i connects to j with some probability pij and this event is independent of the formation of any other edges. We only consider undirected graphs with no self-loops.

Node i is a peripheral node in an inhomogeneous random graph with N nodes if there exist some constant b>0, such that pij<b/N for all other nodes j, where we allow N→∞.

For example, an Erdös-Rényi graph is an inhomogeneous random graph. If the Erdös-Rényi edge probability is specified by p=λ/N for some fixed λ>0, then all nodes are peripheral. As another example, a common assumption in the statistical literature on Stochastic Blockmodels is that the minimum expected degree grows faster than logN. Under this assumption, there are no peripheral nodes in the graph. That logN assumption is perhaps controversial because empirical graphs often have many low-degree nodes.

Suppose an inhomogeneous random graph model such that for some ϵ>0, pij>(1+ϵ)/N for all nodes i,j. If that model contains a non-vanishing fraction of peripheral nodes Vp⊂V, such that |Vp|>ηN for some η>0, then the expected number of distinct g-dangling sets in the sampled graph grows proportionally to N.

Theorem 3.4 studies graphs sampled from an inhomogeneous random graph model with a non-vanishing fraction of peripheral nodes. Throughout the paper, we refer to these graphs more simply as graphs with a sparse and stochastic periphery and, in fact, the proof of Theorem 3.4 only relies on the randomness of the edges in the periphery, i.e. the edges that have an end point in Vp. The proof does not rely on the distribution of the node-induced subgraph of the “core” Vcp. Combined with Fact 3.1, Theorem 3.4 shows that graphs with a sparse and stochastic periphery generate an abundance of g-dangling sets, which creates an abundance of cuts with small conductance, but might only reveal noise. leskovec2009community also shows by real datasets that there is a substantial fraction of nodes that barely connect to the rest of graph, especially 1-whiskers, which is a generalized version of g-dangling sets.

If a graph contains Q g-dangling sets, and the rest of the graph has volume at least 4g2, then there are at least Q/2 eigenvalues that is smaller than (g−1)−1.

Theorem 3.5 shows that every two dangling sets lead to a small eigenvalue. Due to the abundance of g-dangling sets (Theorem 3.4), there are many small eigenvalues and their corresponding eigenvalues are localized on a small set of nodes. This explains what we see in the data example in Figure 1. Each of these many eigenvectors is costly to compute (due to the small eigengaps) and then one needs to decide which are localized (which requires another tuning).

Similar to the graph conductance ϕ(⋅,G) which relaxes to Vanilla-SC chung1997spectral; shi2000normalized; von2007tutorial, we introduce a new graph conductance CoreCut which relaxes to Regularized-SC. The following sketch illustrates the relations. This section compares ϕ(⋅,G) and CoreCut. For ease of exposition, we continue to focus our attention on partitioning into two sets.