Discriminating between causality and correlation is a major problem in machine learning, and theoretical tools for determining causality are still being developed. However, people commonly make causality judgments and are often correct, even in unfamiliar domains. What are humans doing to make these judgments? This paper examines differences in human experts' and non-experts' ability to attribute causality by comparing their performances to those of machine-learning algorithms. We collected human judgments by using Amazon Mechanical Turk (MTurk) and then divided the human subjects into two groups: experts and non-experts. We also prepared expert and non-expert machine algorithms based on different training of convolutional neural network (CNN) models. The results showed that human experts' judgments were similar to those made by an "expert" CNN model trained on a large number of examples from the target domain. The human non-experts' judgments resembled the prediction outputs of the CNN model that was trained on only the small number of examples used during the MTurk instruction. We also analyzed the differences between the expert and non-expert machine algorithms based on their neural representations to evaluate the performances, providing insight into the human experts' and non-experts' cognitive abilities. 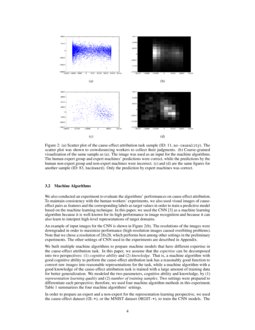 This paper focuses on human cognitive abilities to perform a cause-effect attribution task Mooij et al. (2016). The task was to attribute causality between two variables after making training observations of the two variables. We chose the task because causality judgments are important and yet unfamiliar to most people; thus, the task was appropriate for understanding the differences between human experts’ and non-experts’ cognitive abilities.

The summary of this paper is shown in Figure 1. In this study, we sought to understand how experts and non-experts solve a task’s problems by comparing their performances with those of computational algorithms. Building a computational model that performs similarly to human experts or non-experts is a basic approach to understanding the difference in humans’ cognitive abilities. Among computational models, we chose to use artificial neural networks (ANNs) because they have been widely used to model cognitive abilities on vision LeCun et al. (1998) and languages Elman (1990)

for our study. CNNs were inspired by human vision and originally developed for the handwritten digit-recognition task. Recent advances in CNN models have prevailed in a wide variety of fields, including image recognition, speech recognition, and natural language processing

This paper collected human judgments on cause-effect attribution problems and prepared predictive models based on the CNN technique to (1) evaluate the consistency between human and machine judgments and (2) understand experts’ insights by analyzing the representations of the CNN model that perform similarly to human experts.

Our contributions in this papers are as follows:

Despite the long history of causality studies using machine-learning techniques, applying machine-learning techniques to infer causality based on observations of two variables has not been well studied. The Causality Challenge111http://www.causality.inf.ethz.ch/cause-effect.php, run by the NIPS Workshop and the IJCNN Workshop, provides a data set of several thousands of variable pairs from a wide variety of domains. Researchers have conducted studies to try to automate causal judgments based on the following approaches: a) using causal inference techniques (i.e., probabilistic graphical models) to unravel cause-effect relationships Brown and Tsamardinos (2008); Lopez-Paz et al. (2015); Saeed (2008) and b) developing discriminative models based on supervised machine learning and features directly extracted from cause-effect pairs by applying mathematical functions Boullé (2007); Guyon et al. (2010); Nikulin et al. (2009). To the best of our knowledge, no researchers have compared the performances of machine algorithms and human workers to understand human judgments of causality.

The cause-effect attribution task involves classifying the cause-effect relationship between two variables based on a number of observations. Each pair belongs to one of three classes: (1) A causes B (

forward), (2) B causes A (backward), or (3) No cause-effect relationship (no-causality). We used the NIPS Workshop Causality Challenge dataset, which has been used for previous related studies Guyon et al. (2010)Panov (2014)Mooij et al. (2016). The variable pairs that have causality relationships were selected from actual variables in a wide variety of fields, such as chemistry, ecology, economy, and so on; therefore, the pairs have ground-truth labels regarding their causality. The dataset consists of 4,050 pairs of variables. Each variable has numerical values. The dataset is described as {(x(i)A,x(i)B,y(i))}Ni=1, for which x(i)A=(x(i)A,1,x(i)A,2,…,x(i)A,n(i))T are the values of variable A, x(i)B=(x(i)B,1,x(i)B,2,…,x(i)B,n(i))T are the values of variable B, y(i)∈Y is the label of the i-th pair, n(i) is the number of values for the i-th pair, and N is the number of pairs. Y is a set of causality relationships {1,−1,0} that correspond to forward, backward, and no-causality, respectively.

To collect human workers’ judgments, we conducted crowd-sourced experiments at MTurk. We collected sixty annotators’ judgments for sixty pairs that were randomly selected from the cause-effect dataset; each pair has sixty judgments by sixty annotators. Due to the fact that crowdsourcing workers are often not willing to accept tasks that take more than a certain length of time, we split the sixty pairs into five independent tasks to conduct the experiments efficiently.

Each set of the tasks first presented nine examples (three for forward, three for backward, and three for no-causality) in scatterplot images (e.g., 2 and 2) in the instruction and then asked the MTurk worker to answer cause-effect judgments for twelve images in a multiple-choice manner (“A causes B”, “B causes A”, or “None of them”.) The twelve images were randomly chosen from three classes so that the ratio of guessing the correct answer randomly were 1/3.

For each set, we calculated the accuracy of the cause-effect attribution tasks performed by the sixty annotators. The annotators were sorted by their accuracy and divided into two groups according to their performances after low-performing annotators were filtered out. Specifically, we filtered out the annotators whose accuracy values were within the bottom one-third of annotators. This filtering was conducted to avoid the potential problem of unreliable submissions from crowdsourced workers. Then we split the remaining two-thirds of the annotators into expert and non-expert groups according to their accuracy values. These annotators’ cause-effect attribution predictions were conducted in an aggregated manner for each group. That is, the majority vote of the submitted judgments for each cause-effect pair belonging to the expert group was used as the expert group prediction for that pair.

We also conducted an experiment to evaluate the algorithms’ performances on cause-effect attribution. To maintain consistency with the human workers’ experiments, we also used visual images of cause-effect pairs as features and the corresponding labels as target values in order to train a predictive model based on the machine learning technique. In this paper, we used the CNN LeCun et al. (1998) as a machine learning algorithm because it is well-known for its high performance in image recognition and because it can also learn to interpret high-level representations of target domains.

An example of input images for the CNN is shown in Figure 2. The resolutions of the images were downgraded in order to maximize performance (high-resolution images caused overfitting problems). Note that we chose a resolution of 28x28, which performs best among other settings in the preliminary experiments. The other settings of CNN used in the experiments are described in Appendix.

We prepared two settings for the knowledge perspective. The first setting used all the training data to train predictive models while the second setting used only nine samples to train predictive models. We considered the first setting a knowledgeable method; the second setting assumes the model does not have any prior knowledge on the cause-effect attribution task other than the nine examples shown to human workers with ground-truth labels during the MTurk experiments.

All results. All of the methods’ evaluation results are shown in Table 2. Table 3 summarizes the correlation values between machine algorithms and human experts and non-experts.

We conducted an empirical study for understanding human cognitive abilities to attribute cause-effect relationships based on visual information. Our study compared the performances of human workers and machine algorithms in order to understand human experts’ and non-experts’ cognitive abilities to perform the task. The comparison showed that the majority vote of human experts had a significant correlation with a machine algorithm that used a CNN trained on the target domain for feature extraction and that used the entire training dataset for classification. The analysis also showed that non-experts humans’ judgments had a significant similarity to a machine algorithm that used a non-target domain dataset to train the CNN model for feature extraction and then used only a limited amount of training data for classification.

Our study contributes to the field of cognitive computing by taking a step toward understanding human cognitive abilities to perform the cause-effect attribution task, and our framework provides a novel way to understand human cognitive abilities in general. We believe that this study will contribute to the development of systems that take into account human expertise in facilitating the education of human workers and supporting the collaboration between human workers and machine algorithms.

The network architecture of the CNN models used for the experiment is shown in Table 4. The CNN prepared two convolution filters, followed by the max pooling layer with DropOut [20] and the fully-connected layers. Each layer, except for the input, max-pooling, and output layers, used ReLU as its activation functions. The method basically follows the network architecture of LeNet [12]. The filter size of these convolution filters was 4x4; there were 32 feature maps, and there were 128 nodes in the fully-connected layer. ADADELTA [23]

was used as an optimization technique. The batch size was 128 and the number of epochs was 359. These network parameters were chosen after preliminary experiments so that the CNN could perform the cause-effect attribution task as efficiently as possible. For

CE-*, the CNN model was trained on the 3,990 training examples that excluded the 60 test examples used for the MTurk experiments. For MNIST-*, the CNN model was trained on the 60,000 samples of the training sets of the MNIST dataset. Note that the method also used 28x28 input representations for consistency with the cause-effect attribution task and changed the size of the CNN’s 6th (output) layer used for CE-* from three to ten to fit the number of the MNIST task’s classes.

After fitting a CNN model with training data, we were able to extract a high-level representation of a sample based on the CNN model. The method input each sample as a 28x28 representation and obtained the activated values in the fully connected layer (the fifth layer) via forward propagation. As a result, each sample was converted into a 128-dimensional vector representation. The vector representations can be considered high-level representations obtained from cognitive abilities of CE-* or MNIST-*. In this paper, we used the k-NN algorithm for classification. For instance, CE-all finds the k-nearest neighbor(s) of an input sample from the whole of the training dataset (i.e., 3,990 samples) to classify the sample, while CE-9 finds the k-nearest neighbor for classification in the same manner from the nine samples rather than all 3,990 samples. To find k-nearest neighbors, we calculated the distance based on Euclidean distance in the 128-dimensional space. Note that we used k-NN instead of fine-tuning the CNN models’ entire network architecture because we wanted to differentiate the performances of representation learning by different datasets. Also, our aim was not to achieve high accuracy in the task but to understand human cognitive abilities through analyzing neural network models.