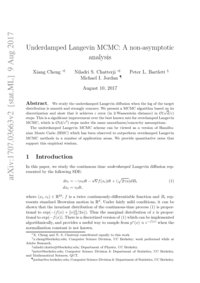 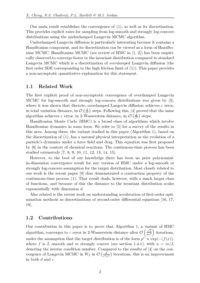 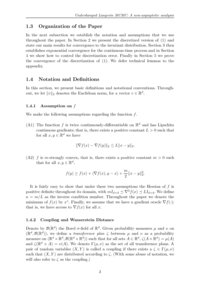 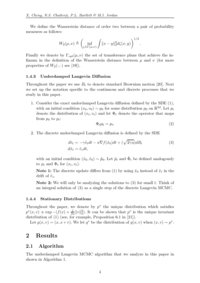 In this paper, we study the continuous time underdamped Langevin diffusion represented by the following stochastic differential equation (SDE):

where (xt,vt)∈R2d, f is a twice continuously-differentiable function and Bt represents standard Brownian motion in Rd. Under fairly mild conditions, it can be shown that the invariant distribution of the continuous-time process (1) is proportional to exp(−(f(x)+∥v∥22/2u)). Thus the marginal distribution of x is proportional to exp(−f(x)). There is a discretized version of (1) which can be implemented algorithmically, and provides a useful way to sample from p∗(x)∝e−f(x) when the normalization constant is not known.

Our main result establishes the convergence of (1) as well as its discretization, to the invariant distribution. This provides explicit rates for sampling from log-smooth and strongly log-concave distributions using the underdamped Langevin MCMC algorithm (Algorithm 1).

the first order SDE corresponding to the high friction limit of (1). This paper provides a non-asymptotic quantitative explanation for this statement.

Hamiltonian Monte Carlo (HMC) is a broad class of algorithms which involve Hamiltonian dynamics in some form. We refer to [Ma et al., 2015] for a survey of the results in this area. Among these, the variant studied in this paper (Algorithm 1), based on the discretization of (1), has a natural physical interpretation as the evolution of a particle’s dynamics under a force field and drag. This equation was first proposed by [Kramers, 1940] in the context of chemical reactions. The continuous-time process has been studied extensively [Hérau, 2002, Villani, 2009, Eberle et al., 2017, Gorham et al., 2016, Baudoin, 2016, Bolley et al., 2010, Calogero, 2012, Dolbeault et al., 2015, Mischler and Mouhot, 2014].

However, to the best of our knowledge there has been no prior polynomial-in-dimension convergence result for any version of HMC under a log-smooth or strongly log-concave assumption for the target distribution111Following the first version of this paper, two recent papers also independently analyzed and provided non-asymptotic guarantees for different versions of HMC [Mangoubi and Smith, 2017, Lee and Vempala, 2017] . Most closely related to our work is the recent paper Eberle et al. [2017] that demonstrated a contraction property of the continuous-time process (1). That result deals, however, with a much larger class of functions, and because of this the distance to the invariant distribution scales exponentially with dimension d.

Our main contribution in this paper is to prove that Algorithm 1, a variant of HMC algorithm, converges to ε error in 2-Wasserstein distance after O(√dκ2ε) iterations, under the assumption that the target distribution is of the form p∗∝exp(−(f(x)), where f is L smooth and m strongly convex (see section 1.4.1), with κ=L/m denoting the condition number. Compared to the results of Durmus and Moulines [2016] on the convergence of Langevin MCMC in W2 in O(dκ2ε2) iterations, this is an improvement in both d and ϵ

. We also analyze the convergence of chain when we have noisy gradients with bounded variance and establish non-asymptotic convergence guarantees in this setting.

1.3 Organization of the Paper

In this section, we present basic definitions and notational conventions. Throughout, we let ∥v∥2

denotes the Euclidean norm, for a vector

We make the following assumptions regarding the function f.

It is fairly easy to show that under these two assumptions the Hessian of f is positive definite throughout its domain, with mId×d⪯∇2f(x)⪯LId×d. We define κ=L/m as the condition number. Throughout the paper we denote the minimum of f(x) by x∗. Finally, we assume that we have a gradient oracle ∇f(⋅); that is, we have access to ∇f(x) for all x.

as the set of all transference plans. A pair of random variables

(X,Y) is called a coupling if there exists a ζ∈Γ(μ,ν) such that (X,Y) are distributed according to ζ. (With some abuse of notation, we will also refer to ζ as the coupling.)

We define the Wasserstein distance of order two between a pair of probability measures as follows:

Finally we denote by Γopt(μ,ν) the set of transference plans that achieve the infimum in the definition of the Wasserstein distance between μ and ν (for more properties of W2(⋅,⋅) see [Villani, 2008]).

Throughout the paper we use Bt to denote standard Brownian motion [Mörters and Peres, 2010]. Next we set up the notation specific to the continuous and discrete processes that we study in this paper.

Throughout the paper, we denote by p∗ the unique distribution which satisfies p∗(x,v)∝exp−(f(x)+12u∥v∥22). It can be shown that p∗ is the unique invariant distribution of (1) (see, for example, Proposition 6.1 in [Pavliotis, 2016]).

The underdamped Langevin MCMC algorithm that we analyze in this paper in shown in Algorithm 1.

, has a Gaussian distribution with conditional mean and covariance obtained from the following computations:

The distribution is obtained by integrating the discrete underdamped Langevin diffusion (3) up to time δ, with the specific choice of γ=2 and u=1/L. In other words, if p(i) is the distribution of (xi,vi), then Zi+1(xi,vi)∼p(i+1)=~Φδp(i). Refer to Lemma 11 in Appendix A for the derivation.

and run Algorithm 1 for n iterations with

then we have the guarantee that

The dependence of the runtime on d,ε is thus ~O(√dε), which is a significant improvement over the corresponding O(dε2) runtime of (overdamped) Langevin diffusion in Durmus and Moulines [2016].

We note that the log(24(d/m+D2)/ε) factor can be shaved off by using a time-varying step size. We present this result as Theorem 14 in Appendix C. In neither theorem have we attempted to optimize the constants.

Now we state convergence guarantees when we have access to noisy gradients, ^∇f(x)=∇f(x)+ξ, where ξ is a independent random variable that satisfies

Each step of the dynamics is now driven by the SDE,

and run Algorithm 1 for n iterations with

then we have the guarantee that

Note that when the variance in the gradients – σ2d is large we recover back the rate of overdamped Langevin diffusion and we need ~O(σ2κ2d/ϵ2) steps to achieve accuracy of ε in W2.

3 Convergence of the Continuous-Time Process

In this section we prove Theorem 5, which demonstrates a contraction for solutions of the SDE (1). We will use Theorem 5 along with a bound on the discretization error between (1) and (3) to establish guarantees for Algorithm 1.

A similar objective function was used in Eberle et al. [2017] to prove contraction.

Given this theorem it is fairly easy to establish the exponential convergence of the continuous-time process to the stationary distribution in W2.

The triangle inequality for the Euclidean norm implies that

Thus we also get convergence of Φtp0 to p∗:

Proof [Proof of Lemma 8] Using Young’s inequality, we have

The other direction follows identical arguments, using instead the inequality

We now turn to the proof of Theorem 5.

Proof [Proof of Theorem 5] We will prove Theorem 5 in four steps. Our proof relies on a synchronous coupling argument, where pt and p′t are coupled (trivially) through independent p0 and p′0, and through shared Brownian motion Bt.

Step 1: Following the definition of (1), we get

The two processes are coupled synchronously which ensures that the Brownian motion terms cancel out. For simplicity, we define zt≜xt−yt and ψt≜vt−wt. As f is twice differentiable, by Taylor’s theorem we have

Using the definition of Ht we obtain

Similarly we also have the following derivative for the position update:

Step 2: Using the result from Step 1, we get

Step 3: Note that for any vector x∈R2d the quadratic form x⊤Stx is equal to

. We now compute and lower bound the eigenvalues of the matrix

Qt by making use of an appropriate choice of the parameters γ and u. The eigenvalues of Qt are given by the characteristic equation

By invoking a standard result of linear algebra (stated in the Appendix as Lemma 18), this is equivalent to solving the equation

Next we diagonalize Ht and get d equations of the form

where Λj with j∈{1,…d} are the eigenvalues of Ht. By the strong convexity and smoothness assumptions we have 0<m≤Λj≤L. We plug in our choice of parameters, γ=2 and u=1/L, to get the following solutions to the characteristic equation:

This ensures that the minimum eigenvalue of Qt satisfies λmin(Qt)≥1/2κ.

Step 4: Putting this together with our results in Step 2 we have the lower bound

Combining this with (7) yields

The convergence rate of Theorem 5 follows immediately from this result by applying Grönwall’s inequality (Corollary 3 in [Dragomir, 2003]).

In this section, we study the solutions of the discrete process (3) up to t=δ for some small δ. Here, δ represents a single step of the Langevin MCMC algorithm. In Theorem 9, we will bound the discretization error between the continuous-time process (1) and the discrete process (3) starting from the same initial distribution. In particular, we bound W2(Φδp0,~Φδp0). This will be sufficient to get the convergence rate stated in Theorem 1. Recall the definition of Φt and ~Φt from (2).

Furthermore, we will assume for now that the kinetic energy (second moment of velocity) is bounded for the continuous-time process,

We derive an explicit bound on EK (in terms of problem parameters d,L,m etc.) in Lemma 12 in Appendix B.

In this section, we will repeatedly use the following inequality:

which follows from Jensen’s inequality using the convexity of ∥⋅∥22.

Proof  We will once again use a standard synchronous coupling argument, in which Φδp0 and ~Φδp0 are coupled through the same initial distribution p0 and common Brownian motion Bt.

First, we bound the error in velocity. By using the expression for vt and ~vt from Lemma 10, we have

This completes the bound for the velocity variable. Next we bound the discretization error in the position variable:

where the first line is by coupling through the initial distribution p0, the second line is by Jensen’s inequality and the third inequality uses the preceding bound. Setting s=δ and by our choice of u=1/L we have that the squared Wasserstein distance is bounded as

Given our assumption that δ is chosen to be smaller than 1, this gives the upper bound:

Having established the convergence rate for the continuous-time SDE (1) and having proved a discretization error bound in Section 4 we now put these together and establish our main result for underdamped Langevin MCMC.

By the discretization error bound in Theorem 9 and the sandwich inequality (6), we get

By the triangle inequality for W2,

where the second step follows by summing the geometric series and by applying the upper bound (6). By another application of (6) we get:

To control T1<ε/2 it is enough to ensure that