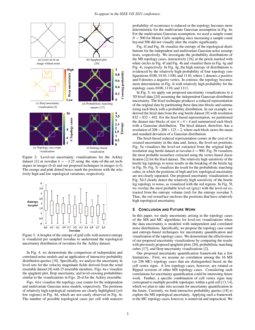 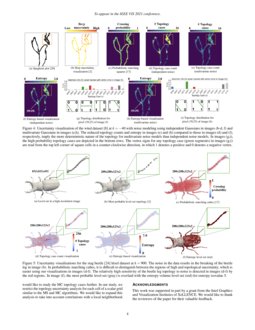 We briefly discuss the vertex-based classification [AthawaleSakhaeeEntezari2016] and probabilistic marching cubes [PothkowWeberHege2011] frameworks, which are the building blocks of our proposed uncertainty quantification framework.

The vertex-based classification predicts the most probable MS or MC topology case for each cell of a Cartesian grid, where uncertain data are assumed to be sampled from independent probability distributions. In Fig. 1, we denoted the fixed data at cell vertices with a variable dxy

. When data have uncertainty, we denote the data at cell vertices by a random variable

be the probability distribution at each vertex estimated from sample data. For the isovalue

k, let D+xy=Pr(Dxy≥k), i.e., the probability of a cell vertex (x,y) attaining a positive vertex sign. Similarly, let D−xy=Pr(Dxy<k). In a vertex-based classification, the vertex is predicted as positive if D+xy≥D−xy; otherwise, it is predicted as negative. The predicted signs, therefore, indicate the single most probable MS or MC topology case for each cell of an uncertain scalar field.

a multivariate Gaussian distribution with the sample mean

~μ=(~μD00,~μD01,~μD10,~μD11)T and sample covariance matrix ~∑=E[(D−~μ)(D−~μ)T]. The N samples are then drawn from the distribution N(~μ,~∑). If the level-set with isovalue k crosses a cell for M number of samples, then the level-crossing probability for the cell is estimated as MN. The same approach is extendable to 3D. Note that the higher value of a sample count N provides a more reliable estimation of the level-crossing probability.

We now describe our framework for the uncertainty quantification and visualization of the level-set topology cases. For simplicity, we limit our descriptions to the 2D MS algorithm, but they are directly applicable to the 3D MC algorithm.

In the uncertainty quantification step, we characterize the uncertainty of the MS topology cases by computing their probability distribution. For the independent random field assumption, we leverage the vertex-based classification framework (Sec. 1.1) to compute the topology case probability distribution. First, we compute D+xy and D−xy for each cell vertex. We then compute the probability for each of the 16 MS topology cases per cell. For example, the probability of D00, D10, and D11 being positive and D01 being negative is equal to the product D+00⋅D−01⋅D+10⋅D+11 because of the independence assumption.

For the correlated random field assumption, we leverage the probabilistic marching cubes framework (Sec. 1.2) to compute the topology case probability distribution. First, we draw N samples from a multivariate Gaussian distribution N(~μ,~∑). Next, we empirically compute the histogram of 16 topology cases depending upon the topology case observed for each of the N samples. Note that the Monte Carlo sampling for the correlated noise assumption results in approximate and expensive computations unlike the closed-form and fast computations for the independent noise models.

We demonstrate the effectiveness of our topology count and entropy-based level-set uncertainty visualizations in Fig. 2 via a synthetic experiment. The level-set for the Ackley dataset [Ackley1987] is visualized in Fig. 2a. We mix the dataset with uniform-distributed noise samples to generate an ensemble. Figs. 2b-f visualize the results for the ensemble using multiple uncertainty visualization techniques for the independent uniform noise assumption, in which the mean and width of a distribution per vertex are estimated from the ensemble.

Fig. 2b visualizes a spaghetti plot [potter2009] of level-sets, in which the orange and pink boxes enclose the positions of the relatively high and low spatial variability of the level-sets, respectively. Fig. 2c visualizes the most probable level-set extracted using the vertex-based classification (Sec. 1.1) with colormapping based on the Ilerp uncertainty [AthawaleEntezari2013]

. The relatively high Ilerp variance (mapped to red) is oberved inside the orange box in Fig.

2c. Fig. 2d visualizes a result for the probabilistic marching squares [PothkowWeberHege2011] (Sec. 1.2), in which the level-crossing probabilities are colormapped.

Figs. 2e-f visualize the results of our topology case count and entropy-based techniques, respectively (Sec. 2). The yellow regions in Fig. 2e indicate the cells that have 16 possible MS topology cases with nonzero probability of occurrence, i.e., high topological uncertainty, across the ensemble. In Fig. 2f, the high entropy mapped to yellow implies a relatively high level of randomness of level-set topology. Our proposed uncertainty visualizations clearly highlight the positions of relatively high topological uncertainty (yellow regions), which are not easily observed by visualizing the level-crossing probability (Fig. 2d). Fig. 3 visualizes entropy boxplots for the isovalues sampled in the range [−4.5,−2.5] for the Ackley ensemble. In Fig. 3, the isovalues near −4.5 exhibit relatively higher median entropy (orange segments) than the isovalues near −2.9.

In Fig. 4, we demonstrate the comparison of independent and correlated noise models and an application of interactive probability distribution queries [PotterKirbyXiu2012]. Specifically, we analyze the uncertainty in level-sets for the velocity magnitude fields derived from the wind ensemble dataset [Vitart2017] with 15 ensemble members. Figs. 4a-c visualize the spaghetti plot, Ilerp uncertainty, and level-crossing probabilities similar to the visualizations in Figs. 2b-d for the Ackley ensemble.

Figs. 4d-e visualize the topology case counts for the independent and multivariate Gaussian noise models, respectively. The positions of relatively high topological variations are clearly highlighted (yellow regions) in Fig. 4d, which are not easily observed in Fig. 4c. The number of possible topological cases per cell with nonzero probability of occurrence is reduced or the topology becomes more deterministic for the multivariate Gaussian assumption in Fig. 4e. For the multivariate Gaussian assumption, we used a sample count N=500 for Monte Carlo sampling since increasing a sample count beyond 500 did not visually alter the results significantly.

Fig. 4f and Fig. 4h visualize the entropy of the topological distributions for the independent and multivariate Gaussian noise assumptions, respectively. We investigate the probability distributions of the MS topology cases, interactively [PotterKirbyXiu2012], at the pixels marked with white circles in Fig. 4f and Fig. 4h and visualize them in Fig. 4g and Fig. 4i, respectively. In Fig. 4g, the high entropy of distributions is evidenced by the relatively high probability of four topology configurations 0100, 0110, 1100, and 1110, where 1 denotes a positive and 0 denotes a negative vertex. In contrast, the topology becomes more deterministic in Fig. 4i with relatively high probability for the topology cases 0100, 1110, and 1111.

In Fig. 5, we apply our proposed uncertainty visualizations to a 3D hixel data [ThompsonLevineBennett2011] assuming the independent Gaussian-distributed uncertainty. The hixel technique produces a reduced representation of the original data by partitioning these data into blocks and summarizing each block with a probability distribution. In our example, we derived the hixel data from the stag beetle dataset [dataset-stagbeetle] with resolution 832×832×492. For the hixel-based representation, we partitioned the dataset into blocks of size 4×4×4 and summarized each block with a Gaussian distribution. The hixel dataset, therefore, has a resolution of 208×208×123×2

, where each block stores the mean and standard deviation of a Gaussian distribution.

Our proposed uncertainty quantification framework has a few limitations. First, we assume no correlation among the 16 MS (or 256 MC) topology cases that are distinguished based on the cell vertex signs. A few topology cases, however, are rotated or flipped versions of other MS topology cases. Considering such correlations for uncertainty quantification could be interesting future work. Further, a specific combination of cell vertex signs may correspond to multiple possible topologies within a grid cell [Nielson:1991:TAD, Nielson:2003:OMC], which we plan to take into account for uncertainty quantification in the future. Currently, we limit interactive probability queries [PotterKirbyXiu2012] to explore the MS topological uncertainty. Applying such a framework to the MC topology cases, however, is nontrivial and impractical. We would like to study the MC topology cases further. In our study, we restrict the topology uncertainty analysis for each cell of a scalar grid similar to the MS and MC algorithms. We would like to expand this analysis to take into account correlations with a local neighborhood.

This work was supported in part by a grant from the Intel Graphics and Visualization Institutes of XeLLENCE. We would like to thank the reviewers of the paper for their valuable feedback.