The influence of dynamic eccentricity on the harmonic spectrum of the torque of a permanent magnet synchronous machine is studied. The spectrum is calculated by an energy balance method. Uncertainty quantification is applied by using generalized Polynomial Chaos and Monte Carlo. It is found that the displacement of the rotor impacts the spectrum of the torque the most. 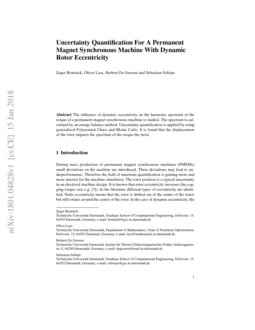 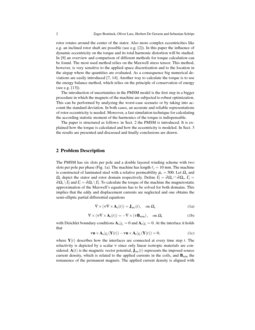 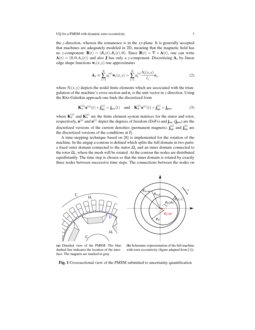 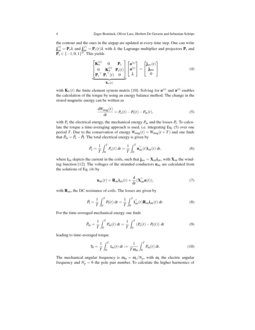 During mass production of permanent magnet synchronous machines (PMSMs) small deviations on the machine are introduced. These deviations may lead to underperformance. Therefore the field of uncertain quantification is gaining more and more interest for the machine simulation. The rotor position is a typical uncertainty in an electrical machine design. It is known that rotor eccentricity increases the cogging torque (see e.g. Coenen_2011aa ). In the literature different types of eccentricity are identified. Static eccentricity means that the rotor is shifted out of the center of the stator but still rotates around the center of the rotor. In the case of dynamic eccentricity, the rotor rotates around the center of the stator. Also more complex eccentricities like e.g. an inclined rotor shaft are possible (see e.g. Bontinck_2016aa ). In this paper the influence of dynamic eccentricity on the torque and its total harmonic distortion will be studied. In Sadowski_1992aa

an overview and comparison of different methods for torque calculation can be found. The most used method relies on the Maxwell stress tensor. This method, however, is very sensitive to the applied space discretization and to the location in the airgap where the quantities are evaluated. As a consequence big numerical deviations are easily introduced

Mizia_1988aa ; Tarnhuvud_1988aa . Another way to calculate the torque is to use the energy balance method, which relies on the principle of conservation of energy (see e.g. Silwal_2014aa ).

The introduction of uncertainties in the PMSM model is the first step in a bigger procedure in which the magnets of the machine are subjected to robust optimization. This can be performed by analyzing the worst-case scenario or by taking into account the standard deviation. In both cases, an accurate and reliable representations of rotor eccentricity is needed. Moreover, a fast simulation technique for calculating the according statistic moment of the harmonics of the torque is indispensable.

The paper is structured as follows: in Sect. 2 the PMSM is introduced. It is explained how the torque is calculated and how the eccentricity is modeled. In Sect. 3 the results are presented and discussed and finally conclusions are drawn.

. To calculate the torque of the machine the magnetostatic approximation of the Maxwell’s equations has to be solved for both domains. This implies that the eddy and displacement currents are neglected and one obtains the semi-elliptic partial differential equations

where →Y(t) describes how the interfaces are connected at every time step t. The reluctivity is depicted by a scalar ν since only linear isotropic materials are considered. →A(t)

is the magnetic vector potential,

→Jsrc(t) represents the imposed source current density, which is related to the applied currents in the coils, and Brem the remanence of the permanent magnets. The applied current density is aligned with the z-direction, whereas the remanence is in the xy-plane. It is generally accepted that machines are adequately modeled in 2D, meaning that the magnetic field has no z-component: →B(t)=(Bx(t),By(t),0). Since →B(t)=∇×→A(t), one can write →A(t)=(0,0,Az(t)) and also →J has only a z-component. Discretizing →As by linear edge shape functions →wi(x,y) one approximates

where Ni(x,y) depicts the nodal finite elements which are associated with the triangulation of the machine’s cross-section and →ez is the unit vector in z-direction. Using the Ritz-Galerkin approach one finds the discretized form

where K(s)ν and K(r)ν are the finite element system matrices for the stator and rotor, respectively, a(s) and a(r)

depict the degrees of freedom (DoFs) and

A time-stepping technique based on Preston_1988aa is implemented for the rotation of the machine. In the airgap a contour is defined which splits the full domain in two parts: a fixed outer domain connected to the stator Ωs and an inner domain connected to the rotor Ωr, where the mesh will be rotated. At the contour the nodes are distributed equidistantly. The time step is chosen so that the inner domain is rotated by exactly three nodes between successive time steps. The connections between the nodes on the contour and the ones in the airgap are updated at every time step. One can write j(s)int=Psλ and j(r)int=Pr(t)λ with λ the Lagrange multiplier and projectors Pr and Ps∈{−1,0,1}N. This yields

with Kν(t) the finite element system matrix Salon_1995aa . Solving for a(s) and a(r) enables the calculation of the torque by using an energy balance method. The change in the stored magnetic energy can be written as

with Pe the electrical energy, the mechanical energy Pm and the losses Pl. To calculate the torque a time-averaging approach is used, i.e. integrating Eq. (5) over one period T. Due to the conservation of energy Wmag(t)=Wmag(t+T) and one finds that ¯Pm=¯Pe−¯Pl. The total electrical energy is given by

where istr depicts the current in the coils, such that jsrc=Xstristr, with Xstr the winding function Schops_2013aa . The voltages of the stranded conductors ustr are calculated from the solutions of Eq. (4) by

with Rstr, the DC resistance of coils. The losses are given by

For the time-averaged mechanical energy one finds

depicts all DoFs. Taking a Fourier transform of

τm one can then define the total harmonic distortion (THD) as

where τi depicts the harmonics of the torque.

The eccentricity of the rotor is described by two parameters: R0(ω), which defines the initial displacement from the central position, and θ0(ω), which depicts the direction of its displacement (see Fig. 0(b)). The stochastic nature of a quantity is indicated by ω. It is assumed that R0,θ0∈L2(Θ,Σ,P)

are independent random variables from the probability space

is normal distributed and

Due to the chosen approach for modeling the rotation, the eccentricity is implicitly considered according to the dynamic model of Frohne_1968aa , meaning that the airgap width δ(x,t) (see Fig. 0(b)) can be expressed as a function of the arc x, such that

with the eccentricity εm(ω)=R0(ω)/δm=R0(ω)/(Rst,in−Rrt), where δm is the mean mechanical airgap width. The angle α is given by

respectively, where fj=f(R(j)0,θ(j)0) denotes a random outcome. The choice of weights wj and samples fj depends on the method. In the Monte Carlo (MC) approach the samples are chosen randomly and have an equal weight 1/N. For collocation based on generalized Polynomial Chaos (gPC) they are determined according to quadrature rules. The gPC bases for normal and uniform distributions are constructed from Hermite polynomials and Legendre polynomials, respectively. In this paper we use both methods for the uncertainty quantification. With aid of the MC sampling a variance based sensitivity analysis is performed based on Saltelli_2010aa . However, it is known, that for a low number of random variables gPC converges faster Xiu_2010aa than Monte Carlo (see e.g. Dick_2013aa ). To avoid numerical noise, remeshing for every sample j is avoided. Instead, the original mesh is mapped to a new one as in Bontinck_2016aa .

for MC is estimated by

This work is supported by the German BMBF in the context of the SIMUROM project (grant number 05M2013), by the ‘Excellence Initiative’ of the German Federal and State Governments and the Graduate School of Computational Engineering at TU Darmstadt.