Extended Kalman Filtering (EKF) can be used to propagate and quantify input uncertainty through a Deep Neural Network (DNN) assuming mild hypotheses on the input distribution. This methodology yields results comparable to existing methods of uncertainty propagation for DNNs while lowering the computational overhead considerably. Additionally, EKF allows model error to be naturally incorporated into the output uncertainty. 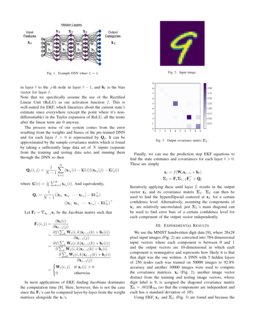 x0 and outputs a vector xL. Uncertainty from x0 propagates through the DNN resulting in uncertainty in xL, but there remains a question of exactly how the input uncertainty translates into output uncertainty, as well as the role of model error in that resulting uncertainty. This question tends to come up during confidence scoring in areas such as automatic speech recognition where things like background noise can distort the input signal [1]. More precisely, suppose x0

is the mean of a multivariate normal distribution with covariance matrix

Σ0. As the DNN acts non-linearly on x0, it is unlikely that the output distribution will be exactly multivariate normal (Gaussian). However, it can be approximated by a Gaussian and modified later if necessary [2]. So, assuming that our output is a multivariate Gaussian with mean xL, we want to find the output covariance matrix ΣL corresponding to the distribution.

, which is unrealistic to compute when the DNN has large or many hidden layers. More recently, Monte Carlo sampling and the unscented transform have been used to take a set of samples from the input distribution, propagate them through the DNN, and approximate the first and second moments of the output distribution from them

. This can be done to propagate through the DNN as a whole or layer-by-layer, approximating the activation function with a piecewise exponential

[4]. This method requires sending at least dim(x0)+1 (where dim gives the dimension of a vector) samples [5] through the DNN for each input we wish to propagate the error for, which is also computationally expensive. Additionally, current methods only find the error in the output which originated directly from the input, not accounting for the inherent error in the DNN itself. In other words, they assume that the DNN is a perfect model, which is rarely the case. Extended Kalman Filtering (EKF) [6] has already been applied to DNNs, but was done so as a part of the model training process [7]. Using EKF for uncertainty propagation through DNNs, we can replicate the results yielded by current methods with much less computation, and also account for the model error of the DNN.

EKF examines a nonlinear system with a discretized time domain. At each time-step it makes a prediction, using the process noise, control input, and the previous step’s state. Using this prediction along with the observation noise, EKF then estimates the system’s current state along with the accuracy of that estimation. By treating the layers of the DNN as discrete time steps and their values as states, EKF may be applied. Our system then has no control input and only has observation noise in the first layer in the form of

Σ0. As such, only the prediction step of EKF need be applied.

to have L−1 hidden layers, and say xℓ is the vector representing the state estimate at layer ℓ and Σℓ is the covariance matrix such that

where E[X] is the expected value of X. The nonlinear operation that takes us from state ℓ to ℓ+1 is given by

is the bias vector for layer

f. This is well-suited for EKF, which linearizes about the current state’s estimate since everywhere (except the point where it’s non-differentiable) in the Taylor expansion of ReLU, all the terms after the linear term are 0 anyway.

The process noise of our system comes from the error resulting from the weights and biases of the pre-trained DNN and for each layer ℓ>0 is represented by Qℓ. It can be approximated by the sample covariance matrix which is found by taking a sufficiently large data set of N inputs (separate from the training and testing data sets) and running them through the DNN so then

Let Fℓ=∇xℓ−1xℓ be the Jacobian matrix such that

In most applications of EKF, finding Jacobians dominates the computation time [8]. Here, however, this is not the case since the Fℓ’s can be computed layer-by-layer from the weight matrices alongside the xℓ’s.

Finally, we can use the prediction step EKF equations to find the state estimates and covariances for each layer ℓ>0. These are simply

Iteratively applying these until layer L results in the output vector xL and its covariance matrix ΣL. ΣL can then be used to find the hyperellipsoid centered at xL for a certain confidence level. Alternatively, assuming the components of xL are relatively uncorrelated, just ΣL’s main diagonal can be used to find error bars of a certain confidence level for each component of the output vector independently.

We use the MNIST handwritten digit data [9], where 28x28 pixel input images (Fig. 2) are converted into 784-dimensional input vectors where each component is between 0 and 1 and the output vectors are 10-dimensional in which each component is nonnegative and represents how likely it is that that digit was the one written. A DNN with 5 hidden layers of 256 nodes each was trained on 50000 images to 92.8% accuracy and another 10000 images were used to compute the covariance matrices. x0 (Fig. 2), another image vector distinct from the training and testing image vectors, whose digit label is 9,

(so that the components are independent and each has a standard deviation of .05).

and because the dominant terms of ΣL are along the diagonal, the components of the predicted xL

can be approximated to be uncorrelated with variances

σ2’s given by the entries on the main diagonal. Then 1σ error bars can be plotted against the predicted values to show the confidence region accounting for the original input uncertainty as well as the error provided by the model itself (Fig. 4).

Repeating this procedure but without adding the Qℓ at each layer, so

we get error bars that depend only on the input uncertainty, effectively assuming that the model is perfect. We can test this by taking a sample of 5000 input image vectors where the components are drawn from independent normal distributions of variance .0025 and centered at the components of x0, finding the model prediction for each of these samples and then comparing our computed standard deviations for each value of the prediction with the sample standard deviations. We find that the EKF method gives a very similar result to that of the Monte Carlo simulation (Fig. 5).

Without assuming a perfect model, it is difficult to test the accuracy of the resulting error bars due to the inherent error of the model, so the actual standard deviations resulting from the single sample cannot be verified. However, the accuracy can be estimated using an aggregate Root Mean Squared Error (RMSE) calculated by inference testing labeled images with the same label as x0. This RMSE can be compared with the estimated standard deviation calculated by EKF with Σ0=0 (Fig. 6). As the EKF-estimated standard deviations represent the accumulation of error through all of the layers while the RMSE only indicates the average error in the final layer, the RMSE will generally be less than the EKF-estimated standard deviations. The effect of a single hidden layer on the error cannot be directly tested because there is no way of knowing what the output of a hidden layer should be. Additionally, that no single image will correctly serve as the ’typical’ image for a given label makes the RMSE an even rougher approximation of the real standard deviation.

Varying the diagonal entries of Σ0 and comparing the EKF output to the actual standard deviations (assuming a perfect model) or RMSE (without assuming a perfect model) illustrates the relationship between Σ0 and ΣL under those disjoint hypotheses (Fig. 7). Note that here, the higher variances are used for illustrative purposes only and are not likely to reflect actual use-cases as the DNN was trained to expect the components of x0 to strictly be in the range [0,1].

Fig. 7 indicates that when assuming a perfect model, higher input error gives higher output error where ReLU doesn’t vanish, and 0 where it does. Additionally, when the input vector component distributions are independent (as assumed in our calculations), the output error plot has the same shape but scales according to the average of the input error. When not assuming a perfect model, the input error plays a very small role in the output error. While the 6 overlapping curves in Fig. 7 are not exactly identical, they only differ from each other by around 10−5 —10−2. This is because in our model, the F and Q matrix entries were very roughly on the orders of around 10−2 —10−1 and 10−5 —10−3 respectively, so iteratively scaling by F’s and adding Q’s made the Σ’s tend toward the same values.

Additionally, running this experiment on DNNs with the same topology but trained to different accuracies, we found that the results could be drastically influenced when using a poorly trained model (Fig. 8).

In the model trained to 56.1% accuracy, whose only nonzero prediction value was on digit 4 (as well as other models trained to relatively low accuracies), the variances for some digits are always 0 regardless of input. This is because if the weights or biases are too small, the values of some nodes vanish identically after applying ReLU, zeroing out the F and Q terms there as well.

When assuming a perfect model, using EKF for uncertainty propagation through a DNN gives results comparable to that of previous methods, but requires fewer and simpler computations which can be performed alongside inference tests. Additionally, EKF provides information in the case of an imperfect model, combining both the input uncertainty and the error from the DNN itself to give a more accurate representation of the total uncertainty of the output. Future work in this area will explore applying EKF to sparse deep neural networks. The methodology of sparsification includes Hessian-based pruning [10, 11], Hebbian pruning [12], matrix decomposition [13], and graph techniques [14, 15, 16, 17, 18], which should be amenable to the EKF approach.