Uncertainty of visual measurement and efficient allocation of sensory resources

We review the reasoning underlying two approaches to combination of sensory uncertainties. First approach is noncommittal, making no assumptions about properties of uncertainty or parameters of stimulation. Then we explain the relationship between this approach and the one commonly used in modeling "higher level" aspects of sensory systems, such as in visual cue integration, where assumptions are made about properties of stimulation. The two approaches follow similar logic, except in one case maximal uncertainty is minimized, and in the other minimal certainty is maximized. Then we demonstrate how optimal solutions are found to the problem of resource allocation under uncertainty. 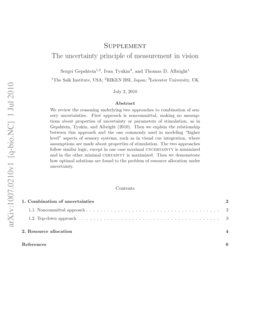 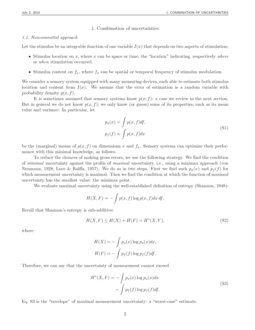 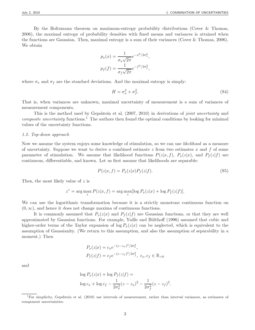 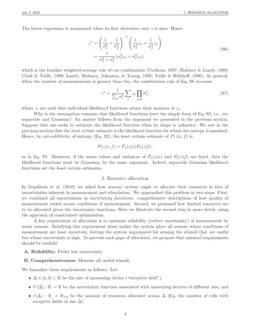 Let the stimulus be an integrable function of one variable I(x) that depends on two aspects of stimulation:

We consider a sensory system equipped with many measuring devices, each able to estimate both stimulus location and content from

. We assume that the error of estimation is a random variable with probability density

It is sometimes assumed that sensory systems know p(x,f): a case we review in the next section. But in general we do not know p(x,f)

; we only know (or guess) some of its properties, such as its mean value and variance. In particular, let

be the (marginal) means of p(x,f) on dimensions x and fx. Sensory systems can optimize their performance with this minimal knowledge, as follows.

Recall that Shannon’s entropy is sub-additive:

Therefore, we can say that the uncertainty of measurement cannot exceed

Eq. S3 is the “envelope” of maximal measurement uncertainty: a “worst-case” estimate.

By the Boltzmann theorem on maximum-entropy probability distributions

where σx and σf

are the standard deviations. And the maximal entropy is simply:

Then, the most likely value of z is

The latter expression is maximized when its first derivative over z is zero. Hence

where zi are such that individual likelihood functions attain their maxima at zi.

In GepshteinTykinAlbright2010 we asked how sensory system ought to allocate their resources in face of uncertainties inherent in measurement and stimulation. We approached this problem in two steps. First, we combined all uncertainties in uncertainty functions: comprehensive descriptions of how quality of measurement varied across conditions of measurement. Second, we proposed how limited resources are to be allocated given the uncertainty functions. Here we illustrate the second step in more detail, using the approach of constrained optimization.

B. Comprehensiveness: Measure all useful stimuli.

We formalize these requirements as follows. Let:

Encouraging reliability.   By requirement A, the system is penalized for allocating resources where uncertainty is high. This is achieved, for example, when the cost for placing resources at Δ is

where k1 is a positive constant. The higher the uncertainty at Δ, or the larger the amount of resources allocated to Δ, the higher the cost. Hence the total cost of allocation is:

Functional J1 is minimal when all the detectors are allocated to (i.e., have the size of) Δ at the lowest value of U(Δ).

Encouraging comprehensiveness.   By requirement B, the system is penalized for failing to measure particular stimuli. This is achieved, for example, when the allocation cost is

where k2 is a positive constant. The total penalty of this type is:

Functional J2 is large (infinite) when all resources are allocated to a small vicinity (one point). J2 is small when r(Δ) are large for all Δ.

Prescription of allocation.   The total penalty of requirements A and B is

Using standard tools of calculus of variations [<]e.g., ¿Elsgolc1961 we find such function r(Δ) that minimizes J. In particular, we consider a variation of J with respect to changes of r(Δ):

Because at optimal r(Δ) the value of δJ is zero for all δr(Δ), we deduce that conditions of optimality are:

This r(Δ) is the prescription of optimal allocation.

Amount of resources.   If the total amount or resources in the system is known and is C:

then we may modify coefficients k1 and k2 in Eq. S10, to make Eq. S10 consistent with Eq. S13. Or, we may use the method of Lagrange multipliers, looking for conditions where variation of the following functional vanishes:

We find Lagrange multiplier λ at which Eq. S13 is satisfied. The solution (using a method similar to that used for solving Eq. S11) is:

The latter constraint is used to find λ in Eq. S15. In either case, the shape of the optimal allocation function r(Δ) is determined by U(Δ), such that allocation function is maximal where U(Δ) is minimal. The formulation in Eq. S14 has an advantage. It allows one to derive optimal prescriptions under changes in the amount of resources allocated to the task, such as in selective attention.

Generalizations.   In a multidimensional case, when Δ represents several variables (e.g., spatial and temporal extents of receptive fields, S and T), and U(⋅) is a function of many variables, the prescription is

Using the method of Lagrange multiplies, one can show that a similar result is obtained when the costs of reliability and comprehensibleness (Eqs. S8–S9) have more general formulations: