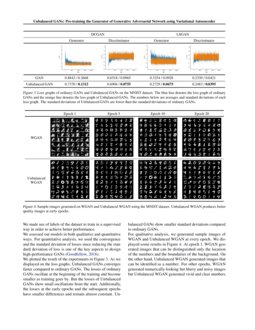 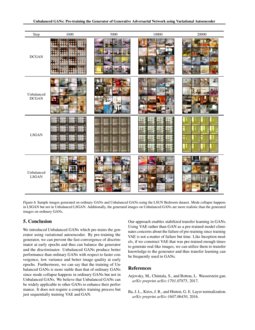 GANs are difficult to train due to convergence pathologies such as mode ...
Tom Schmiedlechner, et al. ∙

on the effectiveness of generative adversarial network on anomaly detection

In this paper, we propose Unbalanced GANs, which uses pre-trained variational decoder as a generator of GAN. There are similar attempts with us which is to combine VAE and GAN. One of the examples is VAEGAN (Larsen et al., 2015). VAEGAN uses an end-to-end architecture that is configured in the order of variational encoder, decoder, and discriminator. This architecture makes possible to generate sharper and more realistic images than VAE. However, since VAEGAN trains three networks simultaneously, it is difficult to extract the latent distribution in the variational encoder and discriminate between the real and generated images in the discriminator. During the training process, first, we train VAE with a given dataset. Then, we transfer the weight of the variational decoder to the generator. With the pre-trained generator, we train GAN again in the same way as before. Our method can be used in any GANs. If there is a pre-trained variational decoder which has the same network architecture with a generator, then our method can be utilized and enhance GANs’ performance.

VAE uses variational inference to approximate prior distribution. The VAE loss is a mixture of the prior regularization parameter and the reconstruction loss:

where DKL is the Kullback–Leibler (KL) divergence. The reconstruction loss is pixel-wise Binary Cross Entropy (BCE) between real images x and reconstructed images ^x. The regularization parameter regularizes the distribution of q to be the zero-mean normal distribution by minimizing KL divergence. VAE is stable during training because VAE uses pixel-wise reconstruction error. However, as VAE is optimized to match the average reconstruction loss of given inputs, it produces blurry images. If we use a pre-trained variational decoder as a generator, we can utilize the advantages of both VAE and GAN. We can initialize the generative distribution with the variational decoder distribution which is the normal distribution. Through training GAN, we can also make blurry images of VAE sharp and clear. Furthermore, there is no concern about the failure of pre-training.

And given optimal discriminator, GAN loss has its global optimum when pg=pdata. At that point, the loss of the generator becomes

BEGAN proposed an equilibrium enforcing method between the loss of the generator and the discriminator. BEGAN used autoencoder as a discriminator which was first proposed in EBGAN. While other GANs attempted to match data distribution directly, BEGAN matched the autoencoder loss distributions between real and generated data by minimizing the Wasserstein distance. To maintain the balance between the generator and the discriminator loss, BEGAN introduced an equilibrium hyperparameter γ∈[0,1]:

Besides, BEGAN borrowed the idea of Proportional Control Theory and used a variable kt to maintain the equilibrium E[L(G(z))]=γE[L(x))]. BEGAN loss is as follows:

where L is a pixel-wise autoencoder loss

based architecture and is known to be stable and robust. Batch normalization

(Ioffe and Szegedy, 2015) and layer normalization (Ba et al., 2016) are also used in both generator and discriminator.

(Heusel et al., 2017) between the source and the target dataset. Next, they transferred the knowledge of the most suitable network to the chosen dataset. They experimented every combination which is initializing the generator and the discriminator with random or pre-trained weights and concluded that initializing both networks with pre-trained weights obtained the best result. Transferring GANs showed that transferring knowledge and domain adaptation can also be used in not only discriminative models but also generative models. Furthermore, they improved the performance of GANs in terms of faster convergence and improving the quality of generated images. However, since transferring GANs used GAN to pre-train GAN, it is not free with the innate difficulties of GANs. If they fail to pre-train GANs on source datasets while suffering from oscillating or mode collapse, then it would be difficult to transfer knowledge or adapt the pre-trained network to the target domain.

In this section, we provide our methods to train our model Unbalanced GANs. We explain why we choose the variational decoder to pre-train the generator. We also provide details of training process and model architecture.

3.1 Variational Decoder as a Generator

Training Unbalanced GANs is a sequential composition of training VAE and GAN. In Algorithm 1, we provide pseudocode of the training procedure of Unbalanced GANs. We first set a target GAN (DCGAN, LSGAN, WGAN) to train and design architecture of it. Then, based on the target GANs’ architecture, we construct an architecture for VAE. We provide the details of architecture in Section 3.3. Next, we train and update the weights of VAE with a given dataset for several epochs. After training, VAE can generate blurry images similar with the dataset. Using pre-trained weights and knowledge, we transfer the weights and knowledge of the variational decoder to the generator. Finally, we train and update the weight of GAN for several epochs. The transferred weights of the variational decoder enable the generator to produce blurry but similar images with the dataset at the beginning of the training. This prevents the discriminator to overwhelm the generator at the beginning and thus can balance the generator and the discriminator at the early stage of the training.

For the model architecture of GAN, we mainly follow the architectural guidelines for Deep Convolutional GANs. 3 ×

We trained three Unbalanced GANs: DCGAN, LSGAN and WGAN on MNIST (LeCun et al., 1998), CIFAR-10 (Krizhevsky et al., 2009) and LSUN Bedroom (Yu et al., 2015) dataset. We chose these GANs since to the best of our knowledge almost all variants of GANs are modified versions of them. We followed the main design concepts of each GANs when implementing. We trained our models using Adam optimizer (Kingma and Ba, 2014) with learning rate 0.0002, β1 0.5 and β2

0.999. We applied the same hyperparameters at both GAN and VAE. We used 128 for the latent dimension, 64 for the batch size. In the Leaky ReLU activation function, we used 0.2 for the slope of the leak. The dropout rate was set to 0.25. We initialized the weights of GAN and VAE with zero-centered normal distribution with standard deviation 0.02 except for the generator which is initialized with the transferred weights of the variational decoder.

We trained our models with 28, 32, 64 image sizes according to the dataset, adding or removing convolutional layers. Training was on two NVIDIA TITAN X GPUs. We pre-trained VAE about 50000 steps and trained GAN about the same number of steps with VAE.

We used 28 × 28 image size for the MNIST dataset. No data augmentation was applied to the images. Furthermore, we used 7 × 7 downsampled images for the discriminator. We made use of labels of the dataset to train in a supervised way in order to achieve better performance. We assessed our models in both qualitative and quantitative ways. For quantitative analysis, we used the convergence and the standard deviation of losses since reducing the standard deviation of loss is one of the key aspects to design high-performance GANs (Goodfellow, 2016). We plotted the result of the experiments in Figure 3. As we displayed on the loss graphs, Unbalanced GANs converges faster compared to ordinary GANs. The losses of ordinary GANs oscillate at the beginning of the training and become smaller as training goes by. But the losses of Unbalanced GANs show small oscillations from the start. Additionally, the losses at the early epochs and the subsequent epochs have smaller differences and remain almost constant. Unbalanced GANs show smaller standard deviations compared to ordinary GANs. For qualitative analysis, we generated sample images of WGAN and Unbalanced WGAN at every epoch. We displayed some results in Figure 4. At epoch 1, WGAN generated images that can be distinguished only the location of the numbers and the boundaries of the background. On the other hand, Unbalanced WGAN generated images that can be identified as a number. For other epochs, WGAN generated numerically-looking but blurry and noisy images but Unbalanced WGAN generated vivid and clear numbers.

We also applied Unbalanced GANs on the LSUN Bedroom dataset. We used 64 × 64 image size and for the discriminator, we downsampled until 4 × 4 image size. We trained in an unsupervised way since the dataset has only one class. Unlike the MNIST dataset and the CIFAR-10 dataset, as the image size is doubled, the loss of VAE increased and took a long time to converge. Besides, the VAE pre-trained on the MNIST dataset produced less blurry real-like images, but on the LSUN Bedroom dataset produced blurry images that only overall structure can be recognized. The image size and the diversity of the dataset affected the quality of images that the variational decoder generated. Because of the low quality variational decoder and excluding the conditions, the standard deviations of losses of Unbalanced GANs and ordinary GANs have almost no differences. Furthermore, the speed of convergence made no great difference. However, the quality of the generated images at early epochs was enhanced. We put generated sample images of Unbalanced GANs and ordinary GANs in Figure 6. Unbalanced DCGAN showed better performance than DCGAN. At step 5000, DCGAN generated meaningless patterns that are not related to the bedroom. On the contrary, Unbalanced DCGAN generated blurry images that have a similar structure with the bedroom. This trend persists in subsequent steps. At step 20000, DCGAN generated images that are similar in color but distorted while Unbalanced DCGAN generated images that have similar color, structure and feature with the bedroom. Especially in LSGAN and Unbalanced LSGAN, the difference grows bigger. LSGAN suffered from mode collapse at the beginning of the training and generates strange patterns. However, Unbalanced generated bedroom-like images while not suffering from mode collapse. This phenomenon shows that Unbalanced LSGAN can learn in a more stable manner than LSGAN.

Our approach enables stabilized transfer learning in GANs. Using VAE rather than GAN as a pre-trained model eliminates concerns about the failure of pre-training since training VAE is not a matter of failure but time. Like Inception models, if we construct VAE that was pre-trained enough times to generate real-like images, we can utilize them to transfer knowledge to the generator and thus transfer learning can be frequently used in GANs.