This paper describes the UMONS solution for the Multimodal Machine Translation Task presented at the third conference on machine translation (WMT18). We explore a novel architecture, called deepGRU, based on recent findings in the related task of Neural Image Captioning (NIC). The models presented in the following sections lead to the best METEOR translation score for both constrained (English, image) -> German and (English, image) -> French sub-tasks. 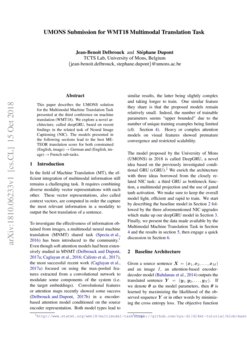 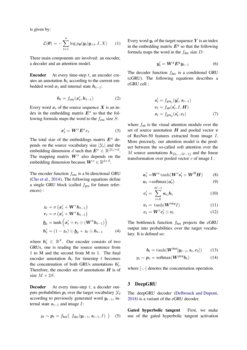 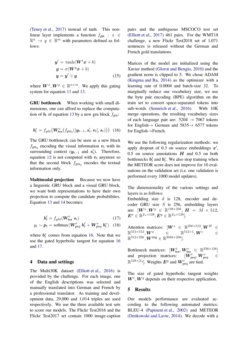 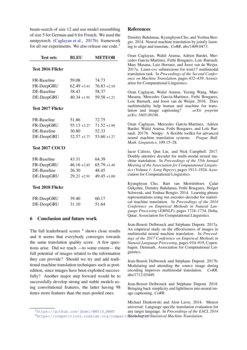 Multimodal machine translation is one of the applications that integrate...
Xin Qian, et al. ∙

In this paper, we describe our submissions to the WMT17 Multimodal Trans...
Jindřich Helcl, et al. ∙

In the field of Machine Translation (MT), the efficient integration of multimodal information still remains a challenging task. It requires combining diverse modality vector representations with each other. These vector representations, also called context vectors, are computed in order the capture the most relevant information in a modality to output the best translation of a sentence.

Specia et al. (2016) has been introduced to the community.111http://www.statmt.org/wmt18/multimodal-task.html

Even though soft attention models had been extensively studied in MNMT

focused on using the max-pooled features extracted from a convolutional network to modulate some components of the system (i.e. the target embeddings). Convolutional features or attention maps recently showed some success

Delbrouck and Dupont (2017b) in a encoder-based attention model conditioned on the source encoder representation. Both model types lead to similar results, the latter being slightly complex and taking longer to train. One similar feature they share is that the proposed models remain relatively small. Indeed, the number of trainable parameters seems “upper bounded” due to the number of unique training examples being limited (cfr. Section 4). Heavy or complex attention models on visual features showed premature convergence and restricted scalability.

The model proposed by the University of Mons (UMONS) in 2018 is called DeepGRU, a novel idea based on the previously investigated conditional GRU (cGRU).222https://github.com/nyu-dl/dl4mt-tutorial/blob/master/docs/cgru.pdf We enrich the architecture with three ideas borrowed from the closely related NIC task: a third GRU as bottleneck function, a multimodal projection and the use of gated tanh activation. We make sure to keep the overall model light, efficient and rapid to train. We start by describing the baseline model in Section 2 followed by the three aforementioned NIC upgrades which make up our deepGRU model in Section 3. Finally, we present the data made available by the Multimodal Machine Translation Task in Section 4 and the results in section 5, then engage a quick discussion in Section 6.

Given a source sentence X=(x1,x2,…,xM) and an image I, an attention-based encoder-decoder model Bahdanau et al. (2014) outputs the translated sentence Y=(y1,y2,…,yN). If we denote θ as the model parameters, then θ is learned by maximizing the likelihood of the observed sequence Y or in other words by minimizing the cross entropy loss. The objective function is given by:

Three main components are involved: an encoder, a decoder and an attention model.

Encoder  At every time-step t, an encoder creates an annotation ht according to the current embedded word xt and internal state ht−1:

Every word xt of the source sequence X is an index in the embedding matrix Ex so that the following formula maps the word to the fenc size S:

where h′t∈RS. Our encoder consists of two GRUs, one is reading the source sentence from 1 to M and the second from M to 1. The final encoder annotation ht for timestep t becomes the concatenation of both GRUs annotations h′t. Therefore, the encoder set of annotations H is of size M×2S.

Decoder  At every time-step t

pt over the target vocabulary Yd according to previously generated word yt−1, internal state st−1 and image I:

Every word yt of the target sequence Y is an index in the embedding matrix Ey so that the following formula maps the word in the fdec size D:

The decoder function fdec is a conditional GRU (cGRU). The following equations describes a cGRU cell :

and the linear transformation over pooled vector

The bottleneck function fbot projects the cGRU output into probabilities over the target vocabulary. It is defined so:

where [⋅,⋅] denotes the concatenation operation.

where Wx,Wg∈Rn×m. We apply this gating system for equation 11 and 13.

GRU bottleneck  When working with small dimensions, one can afford to replace the computation of bt of equation 13 by a new gru block fgru:

The GRU bottleneck can be seen as a new block fgru3 encoding the visual information vt with its surrounding context (yt−1 and s′t). Therefore, equation 12 is not computed with vt anymore so that the second block fgru2 encodes the textual information only.

Multimodal projection  Because we now have a linguistic GRU block and a visual GRU block, we want both representations to have their own projection to compute the candidate probabilities. Equation 13 and 14 becomes:

where bvt comes from equation 16. Note that we use the gated hyperbolic tangent for equation 16 and 17.

The Multi30K dataset (Elliott et al., 2016) is provided by the challenge. For each image, one of the English descriptions was selected and manually translated into German and French by a professional translator. As training and development data, 29,000 and 1,014 triples are used respectively. We use the three available test sets to score our models. The Flickr Test2016 and the Flickr Test2017 set contain 1000 image-caption pairs and the ambiguous MSCOCO test set (Elliott et al., 2017) 461 pairs. For the WMT18 challenge, a new Flickr Test2018 set of 1,071 sentences is released without the German and French gold translations.

Marices of the model are initialized using the Xavier method Glorot and Bengio (2010) and the gradient norm is clipped to 5. We chose ADAM (Kingma and Ba, 2014) as the optimizer with a learning rate of 0.0004 and batch-size 32. To marginally reduce our vocabulary size, we use the byte pair encoding (BPE) algorithm on the train set to convert space-separated tokens into sub-words Sennrich et al. (2016). With 10K merge operations, the resulting vocabulary sizes of each language pair are: 5204 → 7067 tokens for English→ German and 5835→ 6577 tokens for English→French.

We use the following regularization methods: we apply dropout of 0.3 on source embeddings x′, 0.5 on source annotations H and 0.5 on both bottlenecks btt and bvt. We also stop training when the METEOR score does not improve for 10 evaluations on the validation set (i.e. one validation is performed every 1000 model updates).

The size of gated hyperbolic tangent weights Wt,Wg depends on their respective application.

Our models performance are evaluated according to the following automated metrics: BLEU-4 Papineni et al. (2002) and METEOR Denkowski and Lavie (2014). We decode with a beam-search of size 12 and use model ensembling of size 5 for German and 6 for French. We used the nmtpytorch Caglayan et al. (2017b) framework for all our experiments. We also release our code.333https://github.com/jbdel/WMT18_MNMT

The full leaderboard scores 444https://competitions.codalab.org/competitions/19917 shows close results and it seems that everybody converges towards the same translation quality score. A few questions arise. Did we reach —to some extent— the full potential of images related to the information they can provide? Should we try and add traditional machine translation techniques such as post-edition, since images have been exploited successfully? Another major step forward would be to successfully develop strong and stable models using convolutional features, the latter having 98 times more features than the max-pooled ones.