In this letter, we investigate the problem of providing gigabit wireless access with reliable communication in 5G millimeter-Wave (mmWave) massive multiple-input multiple-output (MIMO) networks. In contrast to the classical network design based on average metrics, we propose a distributed risk-sensitive reinforcement learning-based framework to jointly optimize the beamwidth and transmit power, while taking into account the sensitivity of mmWave links due to blockage. Numerical results show that our proposed algorithm achieves more than 9 Gbps of user throughput with a guaranteed probability of 90 importantly, there exists a rate-reliability-network density tradeoff, in which as the user density increases from 16 to 96 per km2, the fraction of users that achieve 4 Gbps are reduced by 11.61 baseline models, respectively. 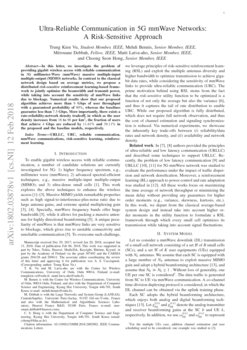 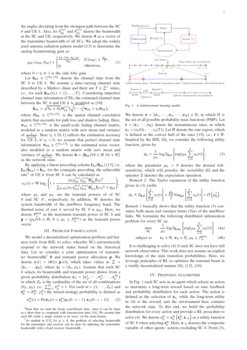 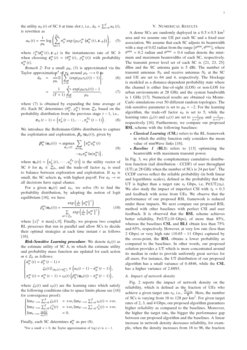 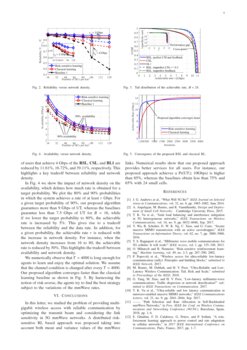 Reversing the Curse of Densification in mmWave Networks Through Spatial Multiplexing

The gold standard of a wireless network is that the throughput increases...
Shuqiao Jia, et al. ∙

To enable gigabit wireless access with reliable communication, a number of candidate solutions are currently investigated for 5G: 1) higher frequency spectrum, e.g., millimeter wave (mmWave); 2) advanced spectral-efficient techniques, e.g., massive multiple-input multiple-output (MIMO); and 3) ultra-dense small cells [1]. This work explores the above techniques to enhance the wireless access [1, 2, 3]. Massive MIMO yields remarkable properties such as high signal-to-interference-plus-noise ratio due to large antenna gains, and extreme spatial multiplexing gain [3, 4]. Specially, mmWave frequency bands offer huge bandwidth [5], while it allows for packing a massive antennas for highly directional beamforming [5]. A unique peculiarity of mmWave is that mmWave links are very sensitive to blockage, which gives rise to unstable connectivity and unreliable communication [5]. To overcome such challenge, we leverage principles of risk-sensitive reinforcement learning (RSL) and exploit the multiple antennas diversity and higher bandwidth to optimize transmission to achieve gigabit data rates, while considering the sensitivity of mmWave links to provide ultra-reliable communication (URC). The prime motivation behind using RSL stems from the fact that the risk-sensitive

, and thus it captures the tail of rate distribution to enable URC. While our proposed algorithm is fully distributed, which does not require full network observation, and thus the cost of channel estimation and signaling synchronization is reduced. Via numerical experiments, we showcase the inherently key trade-offs between (

Related work: In [7, 8] authors provided the principles of ultra-reliable and low latency communication (URLLC) and described some techniques to support URLLC. Recently, the problem of low latency communication [9] and URLLC [10, 11] for 5G mmWave network was studied to evaluate the performance under the impact of traffic dispersion and network densification. Moreover, a reinforcement learning (RL) approach to power control and rate adaptation was studied in [12]

. All these works focus on maximizing the time average of network throughput or minimizing the mean delay without providing any guarantees for higher order moments (e.g., variance, skewness, kurtosis, etc.). In this work, we depart from the classical average-based system design and instead take into account higher order moments in the utility function to formulate a RSL framework through which every small cell optimizes its transmission while taking into account signal fluctuations.

Let us consider a mmWave downlink (DL) transmission of a small cell network consisting of a set B of B small cells (SCs), and a set K of K user equipments (UEs) equipped with Nk antennas. We assume that each SC is equipped with a large number of Nb antennas to exploit massive MIMO gain and adopt a hybrid beamforming architecture [13], and assume that Nb≫Nk≥1 . Without loss of generality, one UE per one SC is considered111For the multiple UEs case, addition channel estimation and user scheduling need to be considered, one example was studied in [3].. The data traffic is generated from SC to UE via mmWave communication. A co-channel time-division duplexing protocol is considered, in which the DL channel can be obtained via the uplink training phase.

as a vector of the transmitter beamwidth of all SCs. We adopt the widely used antenna radiation pattern model

[13] to determine the analog beamforming gain as

where 0<η≪1 is the side lobe gain.

. We assume a time-varying channel state described by a Markov chain and there are

T∈Z+ states, i.e., for each hbk(t),t={1,…,T}. Considering imperfect channel state information (CSI), the estimated channel state between the SC b and UE k is modeled as [10]

where Θbk∈CNb×Nb is the spatial channel correlation matrix that accounts for path loss and shadow fading. Here, wbk∈CNb×Nk

is the small-scale fading channel matrix, modeled as a random matrix with zero mean and variance of

1Nb×Nk. Here τk∈[0,1] reflects the estimation accuracy for UE k, if τk=0, we assume that perfect channel state information. ^wbk∈CNb×Nk is the estimated noise vector, also modeled as a random matrix with zero mean and variance of 1Nb×Nk. We denote h={hbk|∀b∈B,∀k∈K} as the network state.

By applying a linear precoding scheme fbk(^hbk) [13], i.e, fbk(^hbk)=^hbk for the conjugate precoding, the achievable rate222Note that we omit the beam search/track time, since it can be done in a short time as compared with transmission time [14]. We assume that each BS sends a single stream to its users via the main beams. of UE k from SC b can be calculated as

We model a decentralized optimization problem and harness tools from RSL to solve, whereby SCs autonomously respond to the network states based on the historical data. Let us consider a joint optimization of transmitter beamwidth333As studied in [13], for η≤13, the problem of selecting beamwidth for the transmitter and receiver can be done by adjusting the transmitter beamwidth with a fixed receiver beamwidth. θ and transmit power allocation p. We denote z(t)=(θ(t),p(t)), which takes values in Z={z1,⋯,zB}, where zb=(θb,pb). Assume that each SC b

where the parameter μb<0 denotes the desired risk-sensitivity, which will penalize the variability [6] and the operator E denotes the expectation operation.

The Taylor expansion of the utility function given in (3) yields

Remark 1 basically shows that the utility function (3) considers both mean and variance terms (Var) of the mmWave links. We formulate the following distributed optimization problem for every SC as:

It is challenging to solve (4) if each SC does not have full network observation. This work does not assume an explicit knowledge of the state transition probabilities. Here, we leverage principles of RL to optimize the transmit beam in a totally decentralized manner [6, 12, 16].

In Fig. 1 each SC acts as an agent which selects an action to maximize a long-term reward based on user feedback and probability distribution for each action. The action is defined as the selection of zb, while the long-term utility in (4) is the reward, and the environment here contains the network state. To this end, we build the probability distribution for every action and provide a RL procedure to solve (4).

We denote umb=umb(zmb,z−b) as a utility function of SC b when selecting zmb. Here, z−b denotes the composite variable of other agents’ actions excluding SC b. From (3), the utility ub(t) of SC b at time slot t, i.e., ¯ub=∑Tt=0ub(t), is rewritten as

where rmb(zmb(t),z−b) is the instantaneous rate of SC b when choosing zmb(t)=(θmb(t),pmb(t)) with probability πmb(t).

where (7) is obtained by expanding the time average of (6). Each SC determines (θmb,pmb) from Zb based on the probability distribution from the previous stage t−1, i.e.,

We introduce the Boltzmann-Gibbs distribution to capture the exploitation and exploration, βb(ub(t)), given by

where is the utility vector of SC b for zb∈Zb, and the trade-off factor κb is used to balance between exploration and exploitation. If κb is small, the SC selects zb with highest payoff. For κb→∞ all decisions have equal chance.

) to find the probability distribution, by adopting the notion of logit equilibrium

where [x]+≡max[x,0]. Finally, we propose two coupled RL processes that run in parallel and allow SCs to decide their optimal strategies at each time instant t as follows [16].

where ζb(t) and ιb(t) are the learning rates which satisfy the following conditions (due to space limits please see [16] for convergence proof):

Finally, each SC determines zmb as per (8).

A dense SCs are randomly deployed in a 0.5×0.5 km2 area and we assume one UE per each SC and a fixed user association. We assume that each SC adjusts its beamwidth with a step of 0.02 radian from the range [θmin,θmax], where θmin=0.2 radian and θmax=0.4 radian denote the minimum and maximum beamwidths of each SC, respectively. The transmit power level set of each SC is {21,23,25} dBm and the SC antenna gain is 5 dBi. The number of transmit antennas Nb and receive antennas Nk at the SC and UE are set to 64 and 4, respectively. The blockage is modeled as a distance-dependent probability state where the channel is either line-of-sight (LOS) or non-LOS for urban environments at 28 GHz and the system bandwidth is 1 GHz [17]. Numerical results are obtained via Monte-Carlo simulations over 50 different random topologies. The risk-sensitive parameter is set to μb=−2. For the learning algorithm, the trade-off factor κb is set to 5, while the learning rates ζb(t) and ιb(t) are set to 1(t+1)0.55 and 1(t+1)0.6, respectively [16]. Furthermore, we compare our proposed RSL scheme with the following baselines:

28 GHz when the number of SCs is 24 per km2. The CCDF curves reflect the reliable probability (in both linear and logarithmic scales), defined as the probability that the UT is higher than a target rate r0 Gbps, i.e, Pr(UT≥r0). We also study the impact of imperfect CSI with τk=0.3 and feedback with noise from UEs. We observe that the performance of our proposed RSL framework is reduced under these impacts. We next compare our proposed RSL method with other baselines with perfect CSI and user feedback. It is observed that the RSL scheme achieves better reliability, Pr(UT≥10 Gbps), of more than 85%, whereas the baselines CSL and BL1 obtain less than 75% and 65%, respectively. However, at very low rate (less than 2 Gbps) or very high rate (10.65−11 Gbps) captured by the cross-point, the RSL obtains a lower probability as compared to the baselines. In other words, our proposed solution provides a UT which is more concentrated around its median in order to provide uniformly great service for all users. For instance, the UT distribution of our proposed algorithm has a small variance of 0.4846, while the CSL has a higher variance of 2.6893.

Fig. 3 reports the impact of network density on the reliability, which is defined as the fraction of UEs who achieve a given target rate r0, i.e., Kr>r0K. Here, the number of SCs is varying from 16 to 128 per km2. For given target rates of 2, 3, and 4 Gbps, our proposed algorithm guarantees higher reliability as compared to the baselines. Moreover, the higher the target rate, the bigger the performance gap between our proposed algorithm and the baselines. A linear increase in network density decreases reliability, for example, when the density increases from 16 to 96, the fraction of users that achieve 4 Gbps of the RSL, CSL, and BL1 are reduced by 11.61%, 16.72%, and 39.11%, respectively. This highlights a key tradeoff between reliability and network density.

We numerically observe that T=4000 is long enough for agents to learn and enjoy the optimal solution. We assume that the channel condition is changed after every T=4000. Our proposed algorithm converges faster than the classical learning baseline as shown in Fig. 5. By harnessing the notion of risk-averse, the agents try to find the best strategy subject to the variations of the mmWave rates.

In this letter, we studied the problem of providing multi-gigabit wireless access with reliable communication by optimizing the transmit beam and considering the link sensitivity in 5G mmWave networks. A distributed risk-sensitive RL based approach was proposed taking into account both mean and variance values of the mmWave links. Numerical results show that our proposed approach provides better services for all users. For instance, our proposed approach achieves a Pr(UT≥\ 10Gbps) is higher than 85%, whereas the baselines obtain less than 75% and 65% with 24 small cells.