Ultra-log-concavity and discrete degrees of freedom

We develop the notion of discrete degrees of freedom of a log-concave sequence and use it to prove that the quantity ℙ(X=𝔼 X) is maximized, under fixed integral mean, for a Poisson distribution. 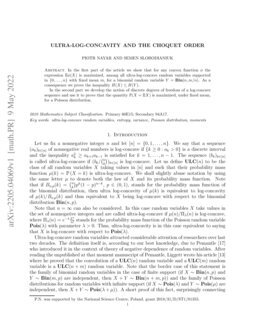 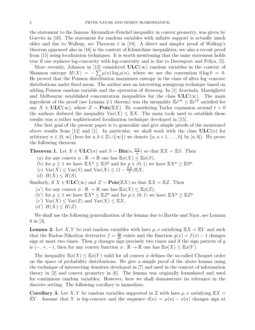 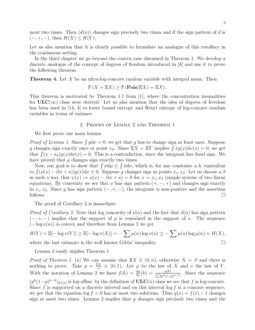 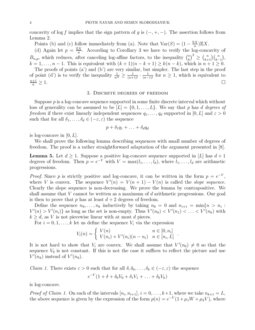 Cleverarm: A Novel Exoskeleton For Rehabilitation Of Upper Limb Impairments

On parametric tests of relativity with false degrees of freedom

Diversity and degrees of freedom in regression ensembles

and such that their probability mass function

μ(k)=P(X=k) is ultra-log-concave. We shall slightly abuse notation by using the same letter μ to denote both the law of X and its probability mass function. Note that if Bn,p(k)=(nk)pk(1−p)n−k, p∈(0,1)

, stands for the probability mass function of the binomial distribution, then ultra log-concavity of

Ultra-log-concave random variables attracted considerable attention of researchers over last two decades. The definition itself is, according to our best knowledge, due to Pemantle [17] who introduced it in the context of theory of negative dependence of random variables. After reading the unpublished at that moment manuscript of Pemantle, Liggett wrote his article [13] where he proved that the convolution of a ULC(n) random variable and a ULC(m) random variable is a ULC(n+m) random variable. Note that the border case of this statement is the family of binomial random variables in the case of finite support (if X∼Bin(n,p) and Y∼Bin(m,p) are independent, then X+Y∼Bin(n+m,p)) and the family of Poisson distributions for random variables with infinite support (if X∼Pois(λ) and Y∼Pois(μ) are independent, then X+Y∼Pois(λ+μ)). A short proof of this fact, surprisingly connecting the statement to the famous Alexandrov-Fenchel inequality in convex geometry, was given by Gurvits in [10]. The statement for random variables with infinite support is actually much older and due to Walkup, see Theorem 1 in [18]. A direct and simpler proof of Walkup’s theorem appeared also in [16] is the context of Khintchine inequalities, see also a recent proof from [15] using localization techniques. It is worth mentioning that the same statement holds true if one replaces log-concavity with log-convexity and is due to Davenport and Pólya, [5].

More recently, Johnson in [12] considered ULC(∞) random variables in the context of Shannon entropy H(X)=−∑μ(n)logμ(n), where we use the convention 0log0=0. He proved that the Poisson distribution maximizes entropy in the class of ultra log–concave distributions under fixed mean. The author uses an interesting semigroup technique based on adding Poisson random variable and the operation of thinning. In [1] Aravinda, Marsiglietti and Melbourne established concentration inequalities for the class ULC(∞). The main ingredient of the proof (see Lemma 2.1 therein) was the inequality EetX≤EetZ satisfied for any X∈ULC(∞), where Z∼Pois(EX). By considering Taylor expansion around t=0 the authors deduced the inequality Var(X)≤EX. The main tools used to establish these results was a rather sophisticated localization technique developed in [15].

Our first goal of the present paper is to generalize and give simple proofs of the mentioned above results from [12] and [1]. In particular, we shall work with the class ULC(n) for arbitrary n∈[0,∞] (here for a,b∈Z∪{∞}) we denote {a,a+1,…,b} by [a,b]). We prove the following theorem.

We shall use the following generalization of the lemma due to Barthe and Naor, see Lemma 8 in [3].

Let X,Y be real random variables with laws μ,ν satisfying EX=EY and such that the Radon-Nikodym derivative f=dμdν exists and the function g(x)=f(x)−1 changes sign at most two times. Then g changes sign precisely two times and if the sign pattern of g is (−,+,−), then for any convex function ϕ:R→R one has Eϕ(X)≤Eϕ(Y).

The inequality Eϕ(X)≤Eϕ(Y) valid for all convex ϕ

defines the so-called Choquet order on the space of probability distributions. We give a simple proof of the above lemma using the technique of intersecting densities developed in

. The lemma was originally formulated and used for continuous random variables. However, here we shall demonstrate its relevance in the discrete setting. The following corollary is immediate.

Let X,Y be random variables supported in Z with laws μ,ν satisfying EX=EY. Assume that Y is log-concave and the sequence d(n)=μ(n)−ν(n) changes sign at most two times. Then (d(n)) changes sign precisely two times and if the sign pattern of d is (−,+,−), then H(X)≤H(Y).

Let us also mention that it is clearly possible to formulate an analogue of this corollary in the continuous setting.

In the third chapter we go beyond the convex case discussed in Theorem 1. We develop a discrete analogue of the concept of degrees of freedom introduced in [8] and use it to prove the following theorem.

Let X be an ultra-log-concave random variable with integral mean. Then

This theorem is motivated by Theorem 1.1 from [1], where the concentration inequalities for ULC(∞) class were derived. Let us also mention that the idea of degrees of freedom has been used in [14, 4] to lower bound entropy and Rényi entropy of log-concave random variables in terms of variance.

We first prove our main lemma.

The proof of Corollary 3 is immediate.

Note that log concavity of ν(n) and the fact that d(n) has sign pattern (−,+,−) implies that the support of μ is contained in the support of ν. The sequence (−logν(n)) is convex and therefore from Lemma 2 we get

where the last estimate is the well known Gibbs’ inequality. ∎

(a) We can assume that EX∈(0,n), otherwise X=S and there is nothing to prove. Take p=EXn∈(0,1). Let μ be the law of X and ν the law of Y. With the notation of Lemma 2 we have f(k)=dμdν(k)=μ(k)(nk)pk(1−p)n−k. Since the sequence (pk(1−p)n−k)k∈[n] is log-affine, by the definition of ULC(n) class we see that f is log-concave. Since f is supported on a discrete interval and on this interval logf is a concave sequence, we get that the equation logf=0 has at most two solutions. Thus g(x)=f(x)−1 changes sign at most two times. Lemma 2 implies that g changes sign precisely two times and the concavity of logf implies that the sign pattern of g is (−,+,−). The assertion follows from Lemma 2.

Suppose p is a log-concave sequence supported in some finite discrete interval which without loss of generality can be assumed to be [L]={0,1,…,L}. We say that p has d degrees of freedom if there exist linearly independent sequences q1,…,qd supported in [0,L] and ε>0 such that for all δ1,…,δd∈(−ε,ε) the sequence

We shall prove the following lemma describing sequences with small number of degrees of freedom. The proof is a rather straightforward adaptation of the argument presented in [8].

Let d≥1. Suppose a positive log-concave sequence supported in [L] has d+1 degrees of freedom. Then p=e−V with V=max(l1,…,ld), where l1,…,ld are arithmetic progressions.

Since p is strictly positive and log-concave, it can be written in the form p=e−V, where V is convex. The sequence V′(n)=V(n+1)−V(n) is called the slope sequence. Clearly the slope sequence is non-decreasing. We prove the lemma by contrapositive. We shall assume that V cannot be written as a maximum of d arithmetic progressions. Our goal is then to prove that p has at least d+2 degrees of freedom.

For i=0,1,…,k let us define the sequence Vi via the expression

It is not hard to show that Vi are convex. We shall assume that V′(n0)≠0 so that the sequence V0 is not constant. If this is not the case it suffices to reflect the picture and use V′(nk) instead of V′(n0).

The first term is affine. For small μ the function hμ(t) is increasing and convex. Since the sequence V+μ1μ2W is convex, it is enough to show that f(g(n)) is a convex sequence whenever f is an increasing convex function and g is convex. This is straightforward since

Now we are left with checking our inequality in points n=ni. But since then V(n)<12V(n+1)+12V(n−1), the inequality follows by a simple continuity argument.

Now the fact that Ui are linearly independent is easy since Ui for i≥1 is supported in [ni+1,L]. These intervals form a decreasing sequence, so in order to show that every combination ∑ki=−1biUi≡0 in fact has zero coefficients it is enough to evaluate this equality first at points n=0,1 to conclude that b−1=b0=0 (note that the support of Ui for i≥1 is contained in [2,L]) and then consecutively at points n1+1,n2+1,…,nk+1 to conclude that b1=b2=…=bk=0. ∎

Let us now consider the space LI of all log-concave sequences (pi)i∈I is an interval I. We shall identify the sequence p

with a vector in

R|I|. Suppose we are given vectors v1,…,vd∈R|I| and real numbers c1,…,cd. Let us introduce the polytope

We will be assuming that this polytope is bounded, which will be the case in our applications. Let us now assume that we are given a convex continuous functional Φ:R|I|→R. The following lemma is well known and can be found in the continuous setting in [8].

The supremum of a convex continuous functional Φ:R|I|→R on LI∩Pd(a,v) is attained on some sequence having at most d degrees of freedom.

Let A=LI∩Pd(a,v). By compactness of A the supremum m of Φ on A is attained. By convexity of Φ on K=conv(A) the maximum is the same as the maximum on A and is attained in some point x∈K. Moreover, as we work in a finite dimensional Euclidean space, K is also compact. A baby version of the Krein-Milman theorem shows that x is a convex combination of extreme points of K, that is x=∑λixi, where positive numbers λi sum up to one. By convexity Φ attains its maximum on K also in all the points xi. Thus, the maximum of Φ on K is attained in some extreme point of K. Clearly extreme points of K must belong to A. It is therefore enough to show that if p∈K has more than d degrees of freedom, then p is not an extreme point of K.

Suppose p∈A with support I′⊆I and there exist linearly independent sequences q1,…,qk supported in I′ and ε>0 such that for all δ1,…,δk∈(−ε,ε) the sequence

is log-concave in I′ and thus also in I. Therefore, it belongs to LI. Note that the set of parameters δ=(δ1,…,δk) for which pδ∈Pd(a,v) form a linear subspace of dimension at least k−d. If k≥d+1 then this subspace is non-trivial and contains two antipodal points δ and −δ. Note that p=12pδ+12p−δ and thus p is not an extreme point of K as both pδ and p−δ belong to K.

We are now ready to prove Theorem 4.

Step 1. Let n0=EX and let μ(n) be the probability mass function of X. Our goal is to prove the inequality μ(n0)≥e−n0nn00n0!. By an approximation argument one can assume that X has its support contained in [L]. Note that μ(n)=1n!p(n), where p∈L[L]. We would like to maximize the linear (and thus convex) functional μ→−μ(n0) under the constraints given by vectors v1=(10!,11!…,1L!) (fixing μ to be a probability distribution) and v2=(0,10!…,1(L−1)!), fixing the mean. Thus Lemma 6 implies that the maximum is attained on sequences having at most two degrees of freedom and therefore for μ of the form μ(n)=cxn01[k,l](n) for some 0≤k≤l. As a consequence, in order to prove the inequality it is enough to consider only sequences μ of the form

It would therefore be enough to show that the function

is nonnegative for all x≥0. Taking x=x0 will then finish the proof.

Step 3. By a direct computation we have

The assertion follows by dividing both sides by x. ∎