The problem to decide whether a given multivariate (quasi-)rational function has only positive coefficients in its power series expansion has a long history. It dates back to Szego in 1933 who showed certain quasi-rational function to be positive, in the sense that all the series coefficients are positive, using an involved theory of special functions. In contrast to the simplicity of the statement, the method was surprisingly difficult. This dependency motivated further research for positivity of (quasi-)rational functions. More and more (quasi-)rational functions have been proven to be positive, and some of the proofs are even quite simple. However, there are also others whose positivity are still open conjectures. In this talk, we focus on a less difficult but also interesting question to decide whether the diagonal of a given quasi-rational function is ultimately positive, especially for the one conjectured to be positive by Kauers in 2007. To solve this question, it suffices to compute the asymptotics of the diagonal coefficients, which can be done by the multivariate singularity analysis developed by Baryshnikov, Pemantle and Wilson. Note that the ultimate positivity is a necessary condition for the positivity, and therefore can be used to either exclude the nonpositive cases or further support the conjectural positivity. 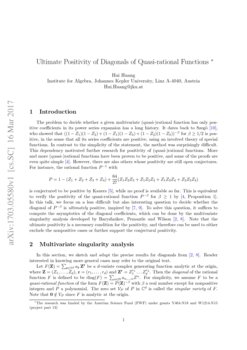 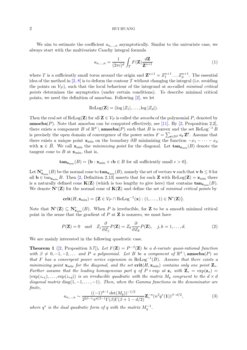 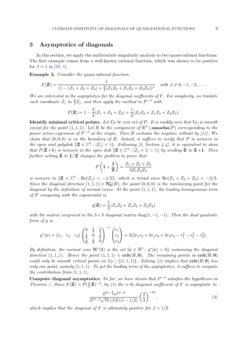 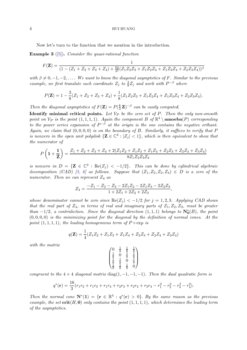 is conjectured to be positive by Kauers [5], while no proof is available so far. This is equivalent to verify the positivity of the quasi-rational function P−β for β≥1 by [4, Proposition 1]. In this talk, we focus on a less difficult but also interesting question to decide whether the diagonal of P−β is ultimately positive, inspired by [7, 9]. To solve this question, it suffices to compute the asymptotics of the diagonal coefficients, which can be done by the multivariate singularity analysis developed by Baryshnikov, Pemantle and Wilson [2, 8]. Note that the ultimate positivity is a necessary condition for the positivity, and therefore can be used to either exclude the nonpositive cases or further support the conjectural positivity.

In this section, we sketch and adapt the precise results for diagonals from [2, 8]. Reader interested in knowing more general cases may refer to the original text.

Let F(Z)=∑r∈NdarZr be a d-variate complex generating function analytic at the origin, where Z=(Z1,…,Zd), r=(r1,…,rd) and Zr=Zr11…Zrdd. Then the diagonal of the rational function F is defined to be diag(F)=∑n∈Nan,…,nZn. For simplicity, we assume F to be a quasi-rational function of the form F(Z)=P(Z)−β with β a real number except for nonpositive integers and P a polynomial. The zero set VP of P in Cd is called the singular variety of F. Note that 0∉VP since F is analytic at the origin.

We aim to estimate the coefficient

an,…,n asymptotically. Similar to the univariate case, we always start with the multivariate Cauchy integral formula

where T is a sufficiently small torus around the origin and Zn+1=Zn+11…Zn+1d. The essential idea of the method in [2, 8] is to deform the contour T without changing the integral (i.e. avoiding the points on VP), such that the local behaviour of the integrand at so-called minimal critical points determines the asymptotics (under certain conditions). To describe minimal critical points, we need the definition of amoebas. Following [2], we let

Then the real set of ReLog(Z) for all Z∈VP is called the amoeba of the polynomial P, denoted by amoeba(P). Note that amoebas can be computed effectively, see [11]. By [2, Proposition 2.2], there exists a component B of Rd∖amoeba(P) such that B is convex and the set ReLog−1B is precisely the open domain of convergence of the power series F=∑r∈NdarZr. Assume that there exists a unique point xmin on the boundary ∂B minimizing the function −x1−⋯−xd with x∈¯B. We call xmin the minimizing point for the diagonal. Let tanxmin(B) denote the tangent cone to B at xmin, that is,

, namely the set of vectors

v such that v⋅b≤0 for all b∈tanxminB. Then [2, Definition 2.13] asserts that for each Z with ReLog(Z)=xmin there is a naturally defined cone K(Z) (which is too lengthy to give here) that contains tanxmin(B). We denote N∗(Z) for the normal cone of K(Z) and define the set of minimal critical points by

Note that N∗(Z)⊆N∗xmin(B). When P is irreducible, for Z to be a smooth minimal critical point in the sense that the gradient of P at Z is nonzero, we must have

We are mainly interested in the following quadratic case.

Let F(Z)=P−β(Z) be a d-variate quasi-rational function with β≠0,−1,−2,… and P a polynomial. Let B be a component of Rd∖amoeba(P) so that F has a convergent power series expension in ReLog−1(B). Assume that there exists a minimizing point xmin for the diagonal, and the set crit(H,xmin) contains only one point Z∗. Further assume that the leading homogeneous part q of P∘exp at z∗ with Z∗=exp(z∗)=(exp(z∗1),…,exp(z∗d)) is an irreducible quadratic with the matrix Mq congruent to the d×d diagonal matrix diag(1,−1,…,−1). Then, when the Gamma functions in the denominator are finite,

where q∗ is the dual quadratic form of q with the matrix M−1q.

In this section, we apply the multivariate singularity analysis to two quasi-rational functions. The first example comes from a well-known rational function, which was shown to be positive for β=1 in [10, 1].

We are interested in the asymptotics for the diagonal coefficents of F. For simplicity, we tranlate each coordinate Zj to 23Zj, and then apply the method to P−β with

Identify minimal critical points. Let VP be zero set of P. It is readily seen that VP is smooth except for the point (1,1,1). Let B be the component of R3∖amoeba(P) corresponding to the power series expension of P−β at the origin. Then B contains the negative orthant by [11]. We claim that (0,0,0) is on the boundary of B. Indeed, it suffices to verify that P is nonzero in the open unit polydisk {Z∈C3:|Zj|<1}. Following [2, Section 4.4], it is equivalent to show that P(Z+1) is nonzero in the open disk {Z∈C3:|Zj+1|<1} by sending Z to Z+1. Then further setting Z to 1/Z changes the problem to prove that

with the matrix congruent to the 3×3 diagonal matrix diag(1,−1,−1). Then the dual quadratic form of q is

Compute diagonal asymptotics. So far, we have shown that P−β satisfies the hypotheses in Theorem 1. Since F(Z)=P(32Z)−β, by (3) the n-th diagonal coefficient of F is asymptotic to

which implies that the diagonal of F is ultimately positive for β>1/2.

Now let’s turn to the function that we mention in the introduction.

with β≠0,−1,−2,…. We want to know the diagonal asymptotics of F. Similar to the previous example, we first translate each coordinate Zj to 38Zj and work with P−β where

Then the diagonal asymptotics of F(Z)=P(83Z)−β can be easily computed.

Identify minimal critical points. Let VP be the zero set of P. Then the only non-smooth point on VP is the point (1,1,1,1). Again the component B of R4∖amoeba(P) corresponding to the power series expansion of P−β at the origin is the one contains the negative orthant. Again, we claim that (0,0,0,0) is on the boundary of B. Similarly, it suffices to verify that P is nonzero in the open unit polydisk {Z∈C4:|Zj|<1}, which is then equivalent to show that the numerator of

Computing diagonal asymptotics. We have seen that P−β satisfies the hypotheses in Theorem 1. Hence by (3), the n-th diagonal coefficient of F is asymptotic to

which implies that the diagonal of F is ultimately positive for β>1.

For the cases when the Gamma functions in the denominator of (3) is infinite, e.g., when β=12 for Example 2 and β=1 for Example 3, we need more techniques from [8] to compute the diagonal asymptotics, which will be addressed in future work.

I would like to thank my advisor Manuel Kauers for encouraging me to work with this topic and also providing valuable comments.