In the finite blocklength scenario, which is suitable for practical applications, a method of maximizing the average effective secrecy rate (AESR), significantly distinct from the infinite case, is proposed to optimize the UAV's trajectory and transmit power subject to UAV's mobility constraints and transmit power constraints. To address the formulated non-convex optimization problem, it is first decomposed into two non-convex subproblems. Then the two subproblems are converted respectively into two convex subproblems via the first-order approximation. Finally, an alternating iteration algorithm is developed by solving the two subproblems iteratively using successive convex approximation (SCA) technique. Numerical results show that our proposed scheme achieves a better AESR performance than a benchmark scheme. 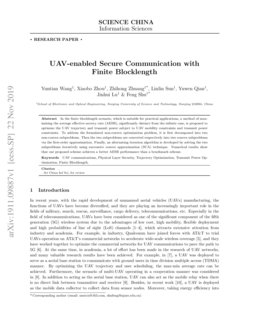 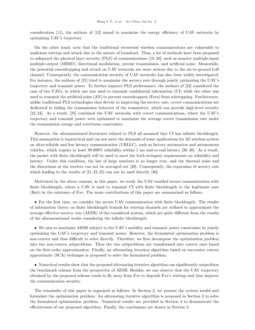 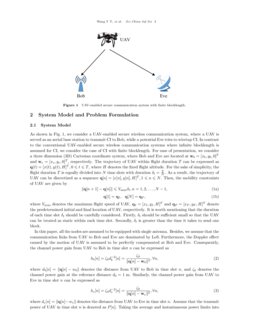 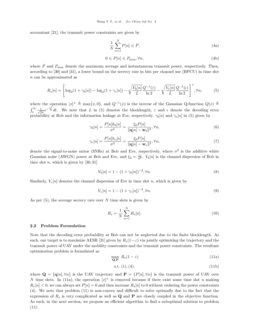 UAV Placement for Real-time Video Acquisition: A Tradeoff between Resolution and Delay

This paper investigates a new model to improve the scalability of low-po...
The Khai Nguyen, et al. ∙

In recent years, with the rapid development of unmanned aerial vehicles (UAVs) manufacturing, the functions of UAVs have become diversified, and they are playing an increasingly important role in the fields of military, search, rescue, surveillance, cargo delivery, telecommunications, etc. Especially in the field of telecommunications, UAVs have been considered as one of the significant component of the fifth generation (5G) wireless system due to the advantages of low cost, high mobility, flexible deployment and high probabilities of line of sight (LoS) channels

[1, 2, 3, 4], which attracts extensive attention from industry and academia. For example, in industry, Qualcomm have joined forces with AT&T to trial UAVs operation on AT&T’s commercial networks to accelerate wide-scale wireless coverage [5], and they have worked together to optimize the commercial networks for UAV communications to pave the path to 5G [6]. At the same time, in academia, a lot of effort has been made in the research of UAV networks, and many valuable research results have been achieved. For example, in [7], a UAV was deployed to serve as a aerial base station to communicate with ground users in time division multiple access (TDMA) manner. By optimizing the UAV trajectory and user scheduling, the max-min average rate can be achieved. Furthermore, the scenario of multi-UAV operating in a cooperation manner was considered in [8]. In addition to acting as the aerial base station, UAV can also act as the mobile relay when there is no direct link between transmitter and receiver [9]. Besides, in recent work [10], a UAV is deployed as the mobile data collector to collect data from sensor nodes. Moreover, taking energy efficiency into consideration [11], the authors of [12] aimed to maximize the energy efficiency of UAV networks by optimizing UAV’s trajectory.

On the other hand, note that the traditional terrestrial wireless communications are vulnerable to malicious wiretap and attack due to the nature of broadcast. Thus, a lot of methods have been proposed to safeguard the physical layer security (PLS) of communications [13, 14, 17, 18, 19, 20, 15, 16], such as massive multiple-input multiple-output (MIMO), directional modulation, precise transmission, and artificial noise. Meanwhile, the potential eavesdropping and attack on UAV networks are more serious due to the air-to-ground LoS channel. Consequently, the communication security of UAV networks has also been widely investigated. For instance, the authors of [21] tried to maximize the secrecy rate through jointly optimizing the UAV’s trajectory and transmit power. To further improve PLS performance, the authors of [22] considered the case of two UAVs, in which one was used to transmit confidential information (CI) while the other was used to transmit the artificial noise (AN) to prevent eavesdroppers (Eves) from wiretapping. Furthermore, unlike traditional PLS technologies that devote to improving the secrecy rate, covert communications are dedicated to hiding the transmission behavior of the transmitter, which can provide high-level security [23, 24]. As a result, [25] combined the UAV networks with covert communications, where the UAV’s trajectory and transmit power were optimized to maximize the average covert transmission rate under the transmission outage and covertness constraints.

However, the aforementioned literatures related to PLS all assumed that CI has infinite blocklength. This assumption is impractical and can not meet the demands of some applications for 5G wireless system on ultra-reliable and low-latency communication (URLLC), such as factory automation and autonomous vehicles, which require at least 99.999% reliability within 1 ms end-to-end latency [26, 27, 28]

. As a result, the packet with finite blocklength will be used to meet the both stringent requirements on reliability and latency. Under this condition, the law of large numbers is no longer true, and the thermal noise and the distortions at the receiver can not be averaged out

, we consider a UAV-enabled secure wireless communication system, where a UAV is served as an aerial base station to transmit CI to Bob, while a potential Eve tries to wiretap CI. In contrast to the conventional UAV-enabled secure wireless communication systems where infinite blocklength is assumed for CI, we consider the case of CI with finite blocklength. For ease of presentation, we consider a three dimension (3D) Cartesian coordinate system, where Bob and Eve are located at

wb=[xb,yb,0]T and we=[xe,ye,0]T, respectively. The trajectory of UAV within flight duration T can be expressed as q(t)=[x(t),y(t),H]T,0≤t≤T, where H denotes the fixed flight altitude. For the sake of simplicity, the flight duration T is equally divided into N time slots with duration δt=TN. As a result, the trajectory of UAV can be discretized as a sequence q[n]=[x[n],y[n],H]T,1≤n≤N. Then, the mobility constraints of UAV are given by

where Vmax denotes the maximum flight speed of UAV, qI=[xI,yI,H]T and qF=[xF,yF,H]T denote the predetermined initial and final location of UAV, respectively. It is worth mentioning that the duration of each time slot δt should be carefully considered. Firstly, δt should be sufficient small so that the UAV can be treated as static within each time slot. Secondly, δt is greater than the time it takes to send one block.

In this paper, all the nodes are assumed to be equipped with single antenna. Besides, we assume that the communication links from UAV to Bob and Eve are dominated by LoS. Furthermore, the Doppler effect caused by the motion of UAV is assumed to be perfectly compensated at Bob and Eve. Consequently, the channel power gain from UAV to Bob in time slot n can be expressed as

where ¯P and Pmax denote the maximum average and instantaneous transmit power, respectively. Then, according to [30] and [31], a lower bound on the secrecy rate in bits per channel use (BPCU) in time slot n can be approximated as

where the operation [x]+≜max{x,0}, and Q−1(x) is the inverse of the Gaussian Q-function Q(x)≜∫∞x1√2πe−t22dt. We note that L in (5) denotes the blocklength, ε and ϵ denote the decoding error probability at Bob and the information leakage at Eve, respectively. γb[n] and γe[n] in (5) given by

denote the signal-to-noise ratios (SNRs) at Bob and Eve, respectively, where

Similarly, Ve[n] denotes the channel dispersion of Eve in time slot n, which is given by

As per (5), the average secrecy rate over N time slots is given by

where Q={q[n],∀n} is the UAV trajectory and P={P[n],∀n} is the transmit power of UAV over N time slots. In (11a), the operation [x]+ is removed because if there exist some time slot n making Rs[n]<0, we can always set P[n]=0 and then increase Rs[n] to 0 without violating the power constraints (4). We note that problem (11) is non-convex and difficult to solve optimally due to the fact that the expression of Rs is very complicated as well as Q and P are closely coupled in the objective function. As such, in the next section, we propose an efficient algorithm to find a suboptimal solution to problem (11).

We note that problem (12) is equivalent to problem (11) since the constraints (12c)-(12f) hold with equality at the optimal solution. However, problem (12) is still non-convex and hard to solve because the objective function (12a) is non-concave with respect to (w.r.t.) Q, P and Ue. Besides, constraints (12c)-(12f) are non-convex. As a result, in the following, we first decompose problem (12) into two subproblems, then we transform the two subproblems into convex optimization problems, and finally we develop an alternating iteration algorithm and employ the SCA technique to solve the formulated problem.

For given feasible transmit power P, problem (12) can be simplified as

However, problem (14) is still non-convex because the objective function (14a) is non-concave, and constraints (12c)-(12f) are non-convex. In the following, we focus on transforming problem (14) into a convex optimization problem.

To this end, we introduce slack variable Lb={lb[n],∀n} and equivalently rewrite constraint (12c) as

Similarly, constraint (12f) can be approximated as constraint

Following the above transformation, problem (14) can be reformulated as

Problem (22) is now a convex optimization problem, which can be efficiently solved by optimization tools such as CVX [32].

For given feasible UAV trajectory Q, problem (12) can be simplified as

Obviously, problem (23) is non-convex due to the convexity of the second term of ~Rs[n] and the non-convexity of constraints (12e) and (12f). Similar to the process in the previous subsection, constraints (12e) and (12f) can be approximated as constraint (19) and (20), respectively. For the objective function (23a), we can employ the first-order approximation to construct a lower bound of ~Rs[n], which is detailed as

Then, problem (23) can be approximated as

We note that problem (25) is a convex optimization problem, which can be efficiently solved by CVX [32].

Fig. 2 plots the UAV trajectories obtained by the JTPO and the POFT schemes versus different flight duration T with blocklength L=400. In this figure, when T=60 s, we observe that the UAV first flies to a certain location around Bob at the maximum speed, then hovers at this location as long as possible, and finally files to the final location at the maximum speed. We note that the hovering location is directly above Bob while the eavesdropper is directly below Bob. As such, the hovering location is a tradoff between the communication performance and the secure performance. Compared with the line segment trajectory obtained by the POFT scheme, the trajectory obtained by our proposed scheme always flies away from Eve to degrade Eve’s eavesdropping. When T=42 s, the UAV is not allowed to fly to Bob due to the limited flight duration. Therefore, for both schemes, the UAV flies at the maximum speed from the initial location to the final location via different paths.

In this paper, we investigated the UAV-enabled secure communication with finite blocklength. Under the condition of fixed blocklength, decoding error probabilities at Bob, and information leakage at Eve, we aimed to maximize AESR by jointly designing UAV’s trajectory and transmit power. However, the resultant optimization problem was non-convex and difficult to solve directly. As such, we first decomposed the formulated optimization problem into the trajectory optimization and the transmit power optimization subproblems. Then we reformulated the two subproblems into convex optimization problems based on the first-order approximation technique. Finally, we developed an alternating iteration algorithm based on the SCA technique to solve the two subproblems iteratively. Numerical results showed that the proposed joint optimization scheme can achieve significantly better secure performance relative to a benchmark scheme.