In this paper, we study an unmanned aerial vehicle (UAV)-aided non-orthogonal multiple access (NOMA) multi-way relaying networks (MWRNs). Multiple terrestrial users aim to exchange their mutual information via an amplify-and-forward (AF) UAV relay. Specifically, the realistic assumption of the residual hardware impairments (RHIs) at the transceivers is taken into account. To evaluate the performance of the considered networks, we derive the analytical expressions for the achievable sum-rate (ASR). In addition, we carry out the asymptotic analysis by invoking the affine expansion of the ASR in terms of high signal-to-noise ratio (SNR) slope and high SNR power offset. Numerical results show that: 1) Compared with orthogonal multiple access (OMA), the proposed networks can significantly improve the ASR since it can reduce the time slots from [ ( M - 1)/2] + 1 to 2; and 2) RHIs of both transmitter and receiver have the same effects on the ASR of the considered networks. 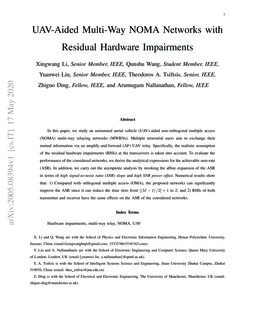 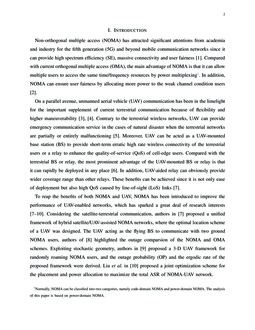 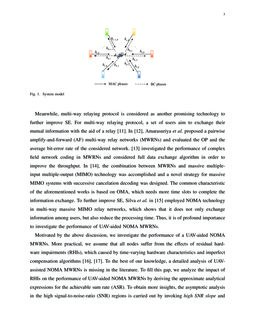 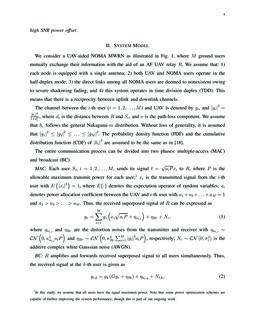 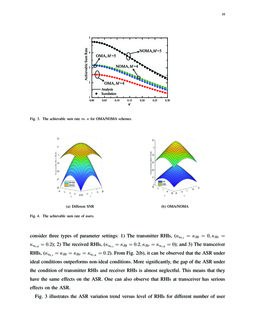 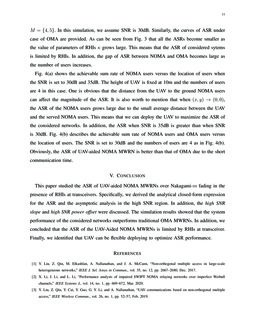 Non-orthogonal multiple access (NOMA) has attracted significant attentions from academia and industry for the fifth generation (5G) and beyond mobile communication networks since it can provide high spectrum efficiency (SE), massive connectivity and user fairness [Z.Ding.2017]. Compared with current orthogonal multiple access (OMA), the main advantage of NOMA is that it can allow multiple users to access the same time/frequency resources by power multiplexing 111

On a parallel avenue, unmanned aerial vehicle (UAV) communication has been in the limelight for the important supplement of current terrestrial communication because of flexibility and higher maneuverability [8660516LiuTWC],[8710357Zhang]. Contrary to the terrestrial wireless networks, UAV can provide emergency communication service in the cases of natural disaster when the terrestrial networks are partially or entirely malfunctioning [8660516Mozaffari]. Moreover, UAV can be acted as a UAV-mounted base station (BS) to provide short-term erratic high rate wireless connectivity of the terrestrial users or a relay to enhance the quality-of-service (QoS) of cell-edge users. Compared with the terrestrial BS or relay, the most prominent advantage of the UAV-mounted BS or relay is that it can rapidly be deployed in any place[7486987Mozaffari]. In addition, UAV-aided relay can obviously provide wider coverage range than other relays. These benefits can be achieved since it is not only ease of deployment but also high QoS caused by line-of-sight (LoS) links [8951059XingwangIA].

To reap the benefits of both NOMA and UAV, NOMA has been introduced to improve the performance of UAV-enabled networks, which has sparked a great deal of research interests [8951059XingwangIA, 8269066Sharma, 8488592Hou, 8663350ZhiguoDing]. Considering the satellite-terrestrial communication, authors in [8951059XingwangIA] proposed a unified framework of hybrid satellite/UAV-assisted NOMA networks, where the optimal location scheme of a UAV was designed. The UAV acting as the flying BS to communicate with two ground NOMA users, authors of [8269066Sharma] highlighted the outage comparsion of the NOMA and OMA schemes. Exploiting stochastic geometry, authors in [8488592Hou]

proposed a 3-D UAV framework for randomly roaming NOMA users, and the outage probability (OP) and the ergodic rate of the proposed framework were derived. Liu

et al. in [8663350ZhiguoDing] proposed a joint optimization scheme for the placement and power allocation to maximize the total ASR of NOMA-UAV network.

Meanwhile, multi-way relaying protocol is considered as another promising technology to further improve SE. For multi-way relaying protocol, a set of users aim to exchange their mutual information with the aid of a relay [J.Xue2015]. In [G.Amarasuriya2012], Amarasuriya et al. proposed a pairwise amplify-and-forward (AF) multi-way relay networks (MWRNs) and evaluated the OP and the average bit-error rate of the considered network. [6809883Sharifian] investigated the performance of complex field network coding in MWRNs and considered full data exchange algorithm in order to improve the throughput. In [C.D.Ho2018], the combination between MWRNs and massive multiple-input multiple-output (MIMO) technology was accomplished and a novel strategy for massive MIMO systems with successive cancelation decoding was designed. The common characteristic of the aforementioned works is based on OMA, which needs more time slots to complete the information exchange. To further improve SE, Silva et al. in [S.Silva2019] employed NOMA technology in multi-way massive MIMO relay networks, which shows that it does not only exchange information among users, but also reduce the processing time. Thus, it is of profound importance to investigate the performance of UAV-aided NOMA MWRNs.

Motivated by the above discussion, we investigate the performance of a UAV-aided NOMA MWRNs. More practical, we assume that all nodes suffer from the effects of residual hardware impairments (RHIs), which caused by time-varying hardware characteristics and imperfect compensation algorithms [X.Li2019],[8892558Li]. To the best of our knowledge, a detailed analysis of UAV-assisted NOMA MWRNs is missing in the literature. To fill this gap, we analyze the impact of RHIs on the performance of UAV-aided NOMA MWRNs by deriving the approximate analytical expressions for the achievable sum rate (ASR). To obtain more insights, the asymptotic analysis in the high signal-to-noise-ratio (SNR) regions is carried out by invoking high SNR slope and high SNR power offset.

We consider a UAV-aided NOMA MWRN as illustrated in Fig. 1, where M ground users mutually exchange their information with the aid of an AF UAV relay R. We assume that: 1) each node is equipped with a single antenna; 2) both UAV and NOMA users operate in the half-duplex mode; 3) the direct links among all NOMA users are deemed to nonexistent owing to severe shadowing fading, and 4) this system operates in time division duplex (TDD). This means that there is a reciprocity between uplink and downlink channels.

The channel between the i-th user (i=1,2,…,M) and UAV is denoted by gi, and |gi|2=|hi|21+dυi, where di is the distance between R and Si, and ν is the path-loss component. We assume that hi follows the general Nakagami-m distribution. Without loss of generality, it is assumed that |g1|2≤|g2|2≤…≤|gM|2

. The probability density function (PDF) and the cumulative distribution function (CDF) of

The entire communication process can be divided into two phases: multiple-access (MAC) and broadcast (BC).

MAC: Each user Si, i=1,2,…,M, sends its signal t=√aiPxi to R, where P is the allowable maximum transmit power for each user;222In this study, we assume that all users have the equal maximum power. Note that some power optimization schemes are capable of further improving the system performance, though this is part of our ongoing work. xi is the transmitted signal from the i-th user with E{|xi|2}=1, where E{⋅}

ai denotes power allocation coefficient between the UAV and i-th user with a1+a2+…+aM=1 and a1>a2>…>aM. Thus, the received superposed signal of R can be expressed as

where ηut,i and ηRr are the distortion noises from the transmitter and receiver with ηut,i∼CN(0,κ2ut,iaiP) and ηRr∼CN(0,κ2Rr∑Mi=1|gi|2aiP), respectively; Nr∼CN(0,σ2r) is the additive complex white Gaussian noise (AWGN).

BC: R amplifies and forwards received superposed signal to all users simultaneously. Thus, the received signal at the k-th user is given as

where G=√PR/(∑Mi=1ρiaiP(1+κ2ut,i+κ2Rr)+σ2r) is the normalization coefficient and PR is the transmitted power at R; ρi=|gi|2 is the channel gain; ηur,k and ηRt represent the distortion noises from the receiver and transmitter with ηur,k∼CN(0,κ2ur,kρkPR) and ηRt∼CN(0,κ2RtPR), respectively; Nt,k∼CN(0,σ2t,k) denotes the AWGN. In this phase, the decoding order is carried out from user with a worse channel condition to user with a better channel condition.

According to [S.Silva2019], the received signal at Sk when Sk decodes n-th user after decoding n−1 users should be divided into two cases:

When n≥k, the received signal at Sk can be written as

For this case, Sk cannot successfully decode Sn and the received signal-to-interference-plus-noise ratio (SINR) is equal to zero. Obviously, the ASR of this case is equal to zero, which is omitted in the sequel.

When n<k, the received signal at Sk can be written as

For this case, Sk can successfully decode Sn and the received SINR is expressed as

In this section, we investigate the analytical expression of the ASR of UAV-aided NOMA MWRNs. Then the asymptotic analysis is explored in the high SNR regime.

Based on (5), the achievable rate of k-th user is given as

where the constant 1/2 represents that the communication process is completed into two time slots. The following theorem presents the achievable rate of the considered system in the presence of either ideal or non-ideal conditions.

Substituting (5) into (6), utilizing Jensen’s inequality, the achievable rate in the presence of non-ideal conditions can be obtained after some algebraic manipulations. For ideal conditions, we just need to set κut,i=κRt=κRr=κur,k=0 in (7). ∎

The high SNR region refers to r1→∞ and r2=cr1, where c is a fixed constant. The asymptotic analysis is provided in the following corollaries.

The total achievable sum rate in the high SNR region can be expressed.

From Corollary 1 to Corollary 3, the analytical expressions for the ASRs of UAV-aided NOMA MWRNs and the asymptotic behaviors in the high SNR regimes are obtained.

To further obtain ASR performance in the high SNR region, we focus on the high SNR slope and high SNR power offset. According to [X.Li2019], the asymptotic achievable rate can be formulated in a general form as

Based on the above definitions, the high SNR slope and the high SNR power offset can be evaluated in the following corollary.

The high SNR slope and the high SNR power offset are obtained in two condition:

From Corollary 4, one can obtain that the high SNR slope and high SNR power offset in two conditions equal to zero and infinity, respectively. This happens due to the fact that an error floor exists in high SNR regions owing to the interference from other users.

In this section, indicative numerical results are provided to verify the correctness of our theoretical analysis and verified by using Monte Carlo simulations with 105 trials. Unless otherwise stated, we use the following parameter settings [6630485Bjornson]: M=3, σr=σt,k=1, κut,i=κRt=κRr=κur,k=0, di=1333This distance is the normalized distance., ν=3, a1=0.5,a2=0.3,a3=0.2 and αi=2,βi=3, P=nPR, where n is a fixed constant.

Fig. 3 illustrates the ASR variation trend versus level of RHIs for different number of user M={4,5}. In this simulation, we assume SNR is 30dB. Similarly, the curves of ASR under case of OMA are provided. As can be seen from Fig. 3 that all the ASRs become smaller as the value of parameters of RHIs κ grows large. This means that the ASR of considered sytems is limited by RHIs. In addition, the gap of ASR between NOMA and OMA becomes large as the number of users increases.

This paper studied the ASR of UAV-aided NOMA MWRNs over Nakagami-m fading in the presence of RHIs at transceivers. Specifically, we derived the analytical closed-form expression for the ASR and the asymptotic analysis in the high SNR region. In addition, the high SNR slope and high SNR power offset were discussed. The simulation results showed that the system performance of the considered networks outperforms traditional OMA MWRNs. In addition, we concluded that the ASR of the UAV-Aided NOMA MWRNs is limited by RHIs at transceiver. Finally, we identified that UAV can be flexible deploying to optimize ASR performance.