In this paper, we introduce the concept of two-way coding, which originates in communication theory characterizing coding schemes for two-way channels, into control theory, particularly to facilitate the analysis and design of feedback control systems under injection attacks. Moreover, we propose the notion of attack decoupling, and show how the controller and the two-way coding can be co-designed to nullify the transfer function from attack to plant, rendering the attack effect zero both in transient phase and in steady state. 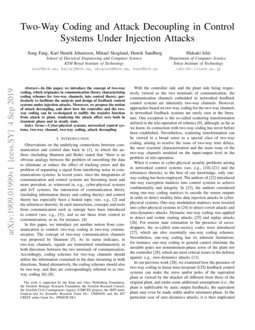 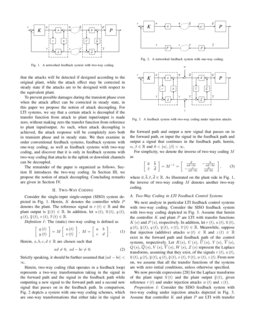 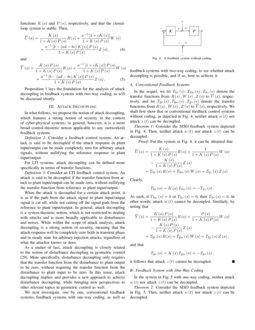 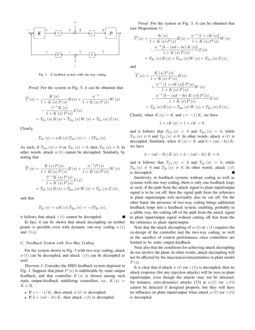 Observations on the underlying connections between communication and control date back to [1], in which the authors (including Shannon and Bode) stated that “there is an obvious analogy between the problem of smoothing the data to eliminate or reduce the effect of tracking errors and the problem of separating a signal from interfering noise in communications systems”. In recent years, since the integrations of communication and control systems are becoming more and more prevalent, as witnessed in, e.g., cyber-physical systems and IoT systems, the interaction of communication theory (including information theory and coding theory) and control theory has especially been a heated topic (see, e.g., [2] and the references therein). In such interactions, concepts and tools from communication such as entropy have been introduced to control (see, e.g., [3]), and so are those from control to communication, as in, for instance, [4].

With the controller side and the plant side being respectively viewed as the two terminals of communication, the communication channels embedded in networked feedback control systems are inherently two-way channels. However, approaches based on two-way coding for the two-way channels in networked feedback systems are rarely seen in the literature. One exception is the so-called scattering transformation utilized in the tele-operation of robotics [9], although, as far as we know, its connection with two-way coding has never before been established. Nevertheless, scattering transformation can be viewed in a broad sense as a special class of two-way coding, aiming to resolve the issue of two-way time delays, the most essential characterization and the main issue of the two-way channels modeled on the input-output level in the problem of tele-operation.

When it comes to cyber-physical security problems arising in networked control systems (see, e.g., [10, 11, 12, 13, 14, 15, 16, 17, 18, 19, 20, 21] and the references therein), to the best of our knowledge, only one-way coding has been employed. The authors of [22] introduced one-way encryption matrices into control systems to achieve confidentiality and integrity. In [23], the authors considered using one-way coding matrices to encode the sensor outputs in order to detect stealthy false data injection attacks in cyber-physical systems. One-way modulation matrices were inserted into cyber-physical systems in [24] to detect covert attacks and zero-dynamics attacks. Dynamic one-way coding was applied to detect and isolate routing attacks [25] and replay attacks [26]

. For remote state estimation in the presence of eavesdroppers, the so-called state-secrecy codes were introduced

[27], which are also essentially one-way coding schemes. Nevertheless, one-way coding has its inherent limitations; for instance, one-way coding in general cannot eliminate the unstable poles nor nonminimum-phase zeros of the plant nor the controller [28], which are most critical issues in the defense against, e.g., zero-dynamics attacks [13].

In our previous work [28], we examined how the presence of two-way coding in linear time-invariant (LTI) feedback control systems can make the zeros and/or poles of the equivalent plant as viewed by the attacker all different from those of the original plant, and under some additional assumptions (i.e., the plant is stabilizable by static output feedback), the equivalent plant may even be made stable and/or minimum-phase. In the particular case of zero-dynamics attacks, it is then implicated that the attacks will be detected if designed according to the original plant, while the attack effect may be corrected in steady state if the attacks are to be designed with respect to the equivalent plant.

To prevent possible damages during the transient phase even when the attack affect can be corrected in steady state, in this paper we propose the notion of attack decoupling. For LTI systems, we say that a certain attack is decoupled if the transfer function from attack to plant input/output is made zero, without making zero the transfer function from reference to plant input/output. As such, when attack decoupling is achieved, the attack response will be completely zero both in transient phase and in steady state. We then examine in order conventional feedback systems, feedback systems with one-way coding, as well as feedback systems with two-way coding, and discover that it is only in feedback systems with two-way coding that attacks in the uplink or downlink channels can be decoupled.

The remainder of the paper is organized as follows. Section II introduces the two-way coding. In Section III, we propose the notion of attack decoupling. Concluding remarks are given in Section IV.

The (static) two-way coding is defined as

Herein, a,b,c,d∈R are chosen such that

Strictly speaking, it should be further assumed that |ad−bc|<∞.

For simplicity, we denote the inverse of two-way coding M as

We now provide expressions [28] for the Laplace transforms of the plant input ¯¯¯u(t) and the plant output ¯¯¯y(t), given reference r(t) and under injection attacks w(t) and z(t).

Consider the SISO feedback system with two-way coding under injection attacks depicted in Fig. 3. Assume that controller K and plant P are LTI with transfer functions K(s) and P(s), respectively, and that the closed-loop system is stable. Then,

Proposition 1 lays the foundation for the analysis of attack decoupling in feedback systems with two-way coding, as will be discussed shortly.

In what follows, we propose the notion of attack decoupling, which features a strong notion of security in the context of cyber-physical systems; in general, however, it is a more broad control-theoretic notion applicable to any (networked) feedback systems.

For LTI systems, attack decoupling can be defined more specifically in terms of transfer functions.

When the attack is decoupled for a certain attack point, it is as if the path from the attack signal to plant input/output signal is cut off, while not cutting off the signal path from the reference to plant input/output. In general, attack decoupling is a system-theoretic notion, which is not restricted to dealing with attacks and is more broadly applicable to disturbances and noises. While within the scope of attack analysis, attack decoupling is a strong notion of security, meaning that the attack response will be completely zero both in transient phase and in steady state for arbitrary injection attacks, regardless of what the attacker knows or does.

Consider the SISO feedback system depicted in Fig. 4. Then, neither attack w(t) nor attack z(t) can be decoupled.

For the system in Fig. 4, it can be obtained that

it follows that attack z(t) cannot be decoupled.

In the system in Fig. 5 with one-way coding, neither attack w(t) nor attack z(t) can be decoupled.

Consider the SISO feedback system depicted in Fig. 5. Then, neither attack w(t) nor attack z(t) can be decoupled.

For the system in Fig. 5, it can be obtained that

it follows that attack z(t) cannot be decoupled.

In fact, it can be shown that attack decoupling on neither points is possible even with dynamic one-way coding α(s) and β(s).

Consider the SISO feedback system depicted in Fig. 3. Suppose that plant P(s) is stabilizable by static output feedback, and that controller K(s) is chosen among such static output-feedback stabilizing controllers, i.e., K(s)=K∈R.

For the system in Fig. 3, it can be obtained that (see Proposition 1)

Note that the attack decoupling of w(t) or z(t) requires the co-design of the controller and the two-way coding, as well as the sacrifice of control performance since controllers are limited to be static output-feedback.

We now examine the implications of attack decoupling in control systems. It is clear that when T¯¯¯uw(s)=0, its H∞ norm is zero, that is,

and moreover, the corresponding Bode integral is given by

Strictly and practically speaking, for w(t), only “almost attack decoupling” is possible; otherwise, algebraic loops will be present in the feedback system. By “almost attack decoupling”, we mean the attack signal can be attenuated to any degree of accuracy, e.g., the H∞ norm of the corresponding transfer function can be made arbitrarily close to zero; cf. almost disturbance decoupling in [31]. In particular, (6) will then become

Meanwhile, for z(t), “exact attack decoupling” (as defined in Definition 2 and Definition 3) can be achieved. That is to say, the following are still achievable:

However, since almost attack decoupling will involve dynamic K(s) and/or dynamic

we leave the detailed discussions on this topic to future research.

In what has been presented in this paper so far, we only considered the so-called “single-point” attacks, such as zero-dynamics attacks [13], where attacks are injected into the feedback system at only one point; in other words, one of w(t) and z(t) is zero. In fact, “double-point” attacks, such as covert attacks [16], where attacks are injected into the system at two points simultaneously, have also been discussed in the literature.

If plant P(s) is not stabilizable by static output feedback, then neither attack w(t) nor attack z(t) can be decoupled. Otherwise, if plant P(s) is stabilizable by static output feedback, it is known from Theorem 3 that the decoupling of w(t) requires that c=−1/K, while the decoupling of z(t) requires that b=(ad−bc)K, in addition to that controller K(s) is chosen among static output-feedback stabilizing controllers, i.e., K(s)=K∈R, in both cases. That is to say, if w(t) and z(t) are to be decoupled simultaneously, then b=(ad−bc)K=adK−bcK=adK+b, which leads to adK=0 and contradicts the fact ad≠0 and K≠0 (otherwise the transfer function from reference R(s) to plant input/output, see the proof of Theorem 3, will be zero).

As a matter of fact, it can be shown more generally that even with dynamic two-way coding

simultaneous decoupling of attack w(t) and attack z(t) is not possible.

In this paper, we have introduced the method of two-way coding from communication into control, in particular, feedback control systems under injection attacks. Additionally, we have proposed the notion of attack decoupling, and it was seen that the controller and two-way coding can be co-designed to nullify the transfer function from attack to plant, zeroing the attack effect completely both in transient phase and in steady state. Future research directions include the analysis of dynamic two-way coding, MIMO systems, discrete-time systems, as well as other classes of attacks in the presence of two-way coding. We are also interested in examining the implications of attack decoupling in communication system design, concerning, e.g., error correction.