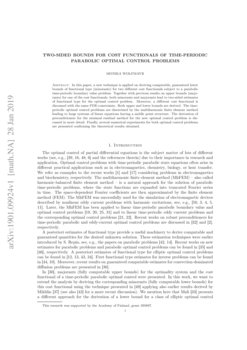 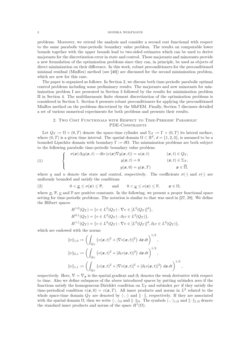 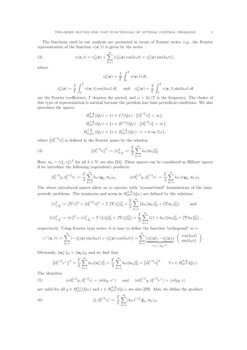 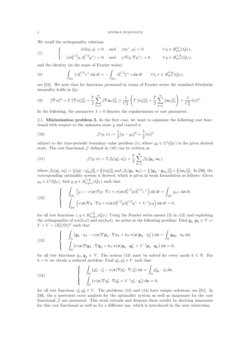 The optimal control of partial differential equations is the subject matter of lots of different works (see, e.g.,

[39, 16, 48, 6] and the references therein) due to their importance in research and application. Optimal control problems with time-periodic parabolic state equations often arise in different practical applications such as in electromagnetics, chemistry, biology, or heat transfer. We refer as examples to the recent works [1] and [17] considering problems in electromagnetics and biochemistry, respectively. The multiharmonic finite element method (MhFEM) – also called harmonic-balanced finite element method – is a natural approach for the solution of parabolic time-periodic problems, where the state functions are expanded into truncated Fourier series in time. The space-dependent Fourier coefficients are then approximated by the finite element method (FEM). The MhFEM was successfully used for the simulation of electromagnetic devices described by nonlinear eddy current problems with harmonic excitations, see, e.g., [50, 3, 4, 5, 11]. Later, the MhFEM has been applied to linear time-periodic parabolic boundary value and optimal control problems [19, 20, 25, 31] and to linear time-periodic eddy current problems and the corresponding optimal control problems [21, 22]. Recent works on robust preconditioners for time-periodic parabolic and eddy-current optimal control problems are discussed in [32] and [2], respectively.

In [30], majorants (fully computable upper bounds) for the optimality system and the cost functional of a time-periodic parabolic optimal control were presented. In this work, we want to extend the analysis by deriving the corresponding minorants (fully computable lower bounds) for this cost functional using the technique presented in [49] applying also earlier results derived by Mikhlin [37] (see also [43] for a more recent discussion). We mention here that Mali [33] presents a different approach for the derivation of a lower bound for a class of elliptic optimal control problems. Moreover, we extend the analysis and consider a second cost functional with respect to the same parabolic time-periodic boundary value problem. The results on computable lower bounds together with the upper bounds lead to two-sided estimates which can be used to derive majorants for the discretization error in state and control. These majorants and minorants provide a new formulation of the optimization problems since they can, in principle, be used as objects of direct minimization on their difference. In this work, robust preconditioners for the preconditioned minimal residual (MinRes) method (see [40]) are discussed for the second minimization problem, which are new for this case.

The paper is organized as follows: In Section 2, we discuss both time-periodic parabolic optimal control problems including some preliminary results. The majorants and new minorants for minimization problem I are presented in Section 3 followed by the results for minimization problem II in Section 4. The multiharmonic finite element discretization of the optimization problems is considered in Section 5. Section 6 presents robust preconditioners for applying the preconditioned MinRes method on the problems discretized by the MhFEM. Finally, Section 7 discusses detailed a set of various numerical experiments for both problems and presents their results.

Let QT:=Ω×(0,T) denote the space-time cylinder and ΣT:=Γ×(0,T) its lateral surface, where (0,T) is a given time interval. The spatial domain Ω⊂Rd, d={1,2,3}, is assumed to be a bounded Lipschitz domain with boundary Γ:=∂Ω. The minimization problems are both subject to the following parabolic time-periodic boundary value problem:

where y and u denote the state and control, respectively. The coefficients σ(⋅) and ν(⋅) are uniformly bounded and satisfy the conditions

where σ––, ¯¯¯σ, ν–– and ¯¯¯ν are positive constants. In the following, we present a proper functional space setting for time-periodic problems. The notation is similar to that was used in [27, 28]. We define the Hilbert spaces

which are endowed with the norms

respectively. Here, ∇=∇x is the spatial gradient and ∂t denotes the weak derivative with respect to time. Also we define subspaces of the above introduced spaces by putting subindex zero if the functions satisfy the homogeneous Dirichlet condition on ΣT and subindex per if they satisfy the time-periodical condition v(x,0)=v(x,T). All inner products and norms in L2 related to the whole space-time domain QT are denoted by ⟨⋅,⋅⟩ and ∥⋅∥, respectively. If they are associated with the spatial domain Ω, then we write ⟨⋅,⋅⟩Ω and ∥⋅∥Ω. The symbols ⟨⋅,⋅⟩1,Ω and ∥⋅∥1,Ω denote the standard inner products and norms of the space H1(Ω).

The functions used in our analysis are presented in terms of Fourier series, e.g., the Fourier representation of the function v(x,t) is given by the series

are the Fourier coefficients, T denotes the period, and ω=2π/T is the frequency. The choice of this type of representation is natural because the problem has time-periodical conditions. We also introduce the spaces

Here, vk=(vck,vsk)T for all k∈N, see also [31]. These spaces can be considered as Hilbert spaces if we introduce the following (equivalent) products:

The above introduced spaces allow us to operate with “symmetrized” formulations of the time-periodic problems. The seminorm and norm in H1,12per(QT) are defined by the relations

respectively. Using Fourier type series, it is easy to define the function “orthogonal” to v:

Obviously, ∥u⊥k∥Ω=∥uk∥Ω and we find that

We recall the orthogonality relations

and the identity (in the sense of Fourier series)

see [31]. We note that for functions presented in terms of Fourier series the standard Friedrichs inequality holds in QT:

In the following, the parameter λ>0 denotes the regularization or cost parameter.

In the first case, we want to minimize the following cost functional with respect to the unknown state y and control u:

subject to the time-periodic boundary value problem (1), where yd∈L2(QT) is the given desired state. The cost functional J defined in (10) can be written as

for all test functions zk,qk∈V. The system (13) must be solved for every mode k∈N. For k=0, we obtain a reduced problem: Find yc0,pc0∈V such that

for all test functions zc0,qc0∈V. The problems (13) and (14) have unique solutions, see [31]. In [30], the a posteriori error analysis for the optimality system as well as majorants for the cost functional J are presented. This work extends and deepens these results by deriving minorants for this cost functional as well as for a different one, which is introduced in the next subsection.

In the second case, we want to minimize the following cost functional with respect to the unknown state y and control u:

subject to the time-periodic boundary value problem (1), where gd∈[L2(QT)]d is the given desired gradient. The optimality system can analogously be derived as for minimization problem I using the Lagrange functional

3. Two-sided Bounds for Minimization Problem I

First, the results of [30] on upper bounds for minimization problem I are presented, since they are needed later to derive the two-sided estimate. Let y=y(v) be the corresponding state to an arbitrary control v. The following upper bound can be proved:

where, for any τ∈H(div,QT), the identity

is valid. The guaranteed and fully computable majorant is given by

where μ1–––=1√2min{ν––,σ––} and CF>0 is the constant coming from the Friedrichs inequality. The parameters α,β>0 have been introduced in order to obtain a quadratic functional by applying Young’s inequality. The arbitrary functions η∈H1,10,per(QT) and v∈L2(QT) can be taken as the approximate solutions of the optimal control problem (10) subject to (1) and τ∈H(div,QT) represents the image of the exact flux ν∇η. For the derivation of (18), the following estimate for the approximation error has been used:

since the infimum is attained for the optimal control u, its corresponding state y(u) and its exact flux ν∇y(u), and for α going to zero. Therefore, we have the estimate

In this work, we complement the guaranteed upper bounds for the discretization error in state and control of minimizing cost functional J defined in (10) subject to (1). This is done by obtaining fully computable lower bounds for J in the spirit of [49] leading to two-sided bounds for the cost functional (10). Let y=y(u) be the optimal state corresponding to the optimal control function u∈L2(QT), which is connected with the adjoint state p=p(u) by the identity u=−λ−1p(u). Then y=y(u) is the solution of the variational formulation

Note that we assumed that η∈H1,10,per(QT) according to the derivation of the majorant, but so far the assumption η∈H1,120,per(QT) would be enough.

. Note that at the moment

Now we add and subtract λ−1~pηζ in the last integral as well as use equation (26) again. Moreover, we exploit the fact that we have assumed that η∈H1,10,per(QT), hence, we can apply the identities (5). Altogether these steps yield the estimate

Let us consider the adjoint equation (25). Adding and subtracting ζ∈H1,10,per(QT) in the left-hand side of the equation leads to

Next we introduce the auxiliary variable ρ∈H(div,QT). Together with using that ζ∈H1,10,per(QT) as well as applying the Cauchy-Schwarz and Friedrichs inequalities, the following estimate for the right-hand side of (31) can be obtained:

Using (2) and the orthogonality relations (7), we can prove the following estimate from below for the left-hand side of (31):

Combining now both estimates together with ∥∇(pη−ζ)∥≤|pη−ζ|1,12 we finally derive estimate (30). ∎