In this paper we consider testing the equality of probability vectors of two independent multinomial distributions in high dimension. The classical chi-square test may have some drawbacks in this case since many of cell counts may be zero or may not be large enough. We propose a new test and show its asymptotic normality and the asymptotic power function. Based on the asymptotic power function, we present an application of our result to neighborhood type test which has been previously studied, especially for the case of fairly small p-values. To compare the proposed test with existing tests, we provide numerical studies including simulations and real data examples. 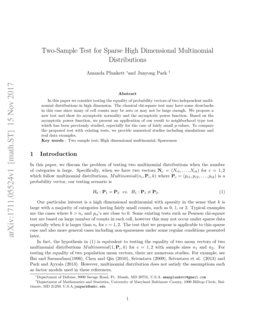 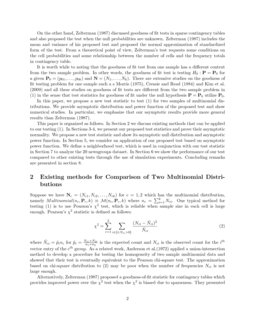 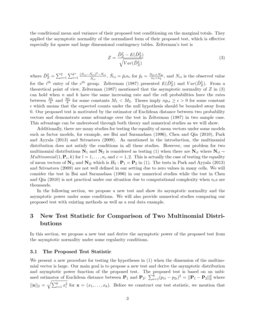 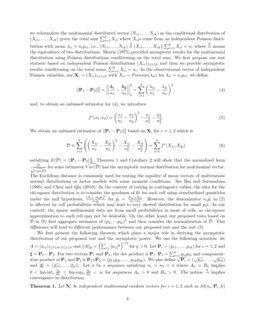 Our particular interest is a high dimensional multinomial with sparsity in the sense that k is large with a majority of categories having fairly small counts, such as 0, 1, or 2. Typical examples are the cases where k>nc and pci’s are close to 0. Some existing tests such as Pearson chi-square test are based on large number of counts in each cell, however this may not occur under sparse data especially when k is larger than nc for c=1,2. The test that we propose is applicable to this sparse case and also more general cases including non-sparseness under some regular conditions presented later.

In fact, the hypothesis in (1) is equivalent to testing the equality of two mean vectors of two multinomial distributions Multinomial(1,Pc,k) for c=1,2 with sample sizes n1 and n2. For testing the equality of two population mean vectors, there are numerous studies. For example, see Bai and Saranadasa(1996), Chen and Qin (2010), Srivastava (2009), Srivastava et al. (2013) and Park and Ayyala (2013). However, multinomial distribution does not satisfy the assumptions such as factor models used in these references.

On the other hand, Zelterman (1987) discussed goodness of fit tests in sparse contingency tables and also proposed the test when the null probabilities are unknown. Zelterman (1987) includes the mean and variance of his proposed test and proposed the normal approximation of standardized form of the test. From a theoretical point of view, Zelterman’s test requests some conditions on the cell probabilities and some relationship between the number of cells and the frequency totals in contingency table.

In this paper, we propose a new test statistic to test (1) for two samples of multinomial distributions. We provide asymptotic distribution and power function of the proposed test and show numerical studies. In particular, we emphasize that our asymptotic results provide more general results than Zelterman (1987).

This paper is organized as follows. In Section 2 we discuss existing methods that can be applied to our testing (1). In Sections 3-4, we present our proposed test statistics and prove their asymptotic normality. We propose a new test statistic and show its asymptotic null distribution and asymptotic power function. In Section 5, we consider an application of our proposed test based on asymptotic power function. We define a neighborhood test, which is used in conjunction with our test statistic in Section 7 to analyze the 20 newsgroups dataset. In Section 6 we show the performance of our test compared to other existing tests through the use of simulation experiments. Concluding remarks are presented in section 8.

Suppose we have Nc=(Nc1,Nc2,…,Nck) for c=1,2 which has the multinomial distribution, namely Multinomial(nc,Pc,k)≡M(nc,Pc,k) where nc=∑ki=1Nci. One typical method for testing (1) is to use Pearson’s χ2 test, which is reliable when sample size in each cell is large enough. Pearson’s χ2 statistic is defined as follows:

group. As a related work, Anderson et al.(1972) applied a union-intersection method to develop a procedure for testing the homogeneity of two sample multinomial data and showed that their test is eventually equivalent to the Pearson chi-square test. The approximation based on chi-square distribution to (

2) may be poor when the number of frequencies Nci is not large enough.

Alternatively, Zelterman (1987) proposed a goodness-of-fit statistic for contingency tables which provides improved power over the χ2 test when the χ2 is biased due to sparseness. They presented the conditional mean and variance of their proposed test conditioning on the marginal totals. They applied the asymptotic normality of the normalized form of their proposed test, which is effective especially for sparse and large dimensional contingency tables. Zelterman’s test is

where ^D2Z=∑2c=1∑k⋆i=1(Nci−^Nci)2−Nci^Nci, ^Nci=^pinc for ^pi=N1i+N2in1+n2, and Nci is the observed value for the ith entry of the cth group. Zelterman (1987) presented E(^D2Z) and Var(^D2Z). From a theoretical point of view, Zelterman (1987) mentioned that the asymptotic normality of Z in (3) can hold when n and k have the same increasing rate and the cell probabilities have the rates between M1k and M2k for some constants M1<M2. Theses imply npci≥ϵ>0 for some constant ϵ

which means that the expected counts under the null hypothesis should be bounded away from 0. Our proposed test is motivated by the estimator of Euclidean distance between two probability vectors and demonstrate some advantage over the test in Zelterman (1987) in two sample case. This advantage can be understood through both theory and numerical studies as we will show.

Additionally, there are many studies for testing the equality of mean vectors under some models such as factor models, for example, see Bai and Saranadasa (1996), Chen and Qin (2010), Park and Ayyala (2013) and Srivastava (2009). As mentioned in the introduction, the multinomial distribution does not satisfy the conditions in all these studies. However, our problem for two multinomial distributions N1 and N2 is considered as testing (1) when there are Ncl where Ncl∼Multinomial(1,Pc,k) for l=1,…,nc and c=1,2. This is actually the case of testing the equality of mean vectors of N1l and N2l which is H0:P1=P2 in (1). The tests in Park and Ayyala (2013) and Srivastava (2009) are not well defined in our setting due to zero values in many cells. We will consider the test in Bai and Saranadasa (1996) in our numerical studies while the test in Chen and Qin (2010) is not practical under our situation due to computational complexity when ncs are thousands.

In the following section, we propose a new test and show its asymptotic normality and the asymptotic power under some conditions. We will also provide numerical studies comparing our proposed test with existing methods as well as a real data example.

In this section, we propose a new test and derive the asymptotic power of the proposed test from the asymptotic normality under some regularity conditions.

We present a new procedure for testing the hypotheses in (1

) when the dimension of the multinomial vector is large. Our main goal is to propose a new test and derive the asymptotic distribution and asymptotic power function of the proposed test. The proposed test is based on an unbiased estimator of Euclidean distance between

s come from an independent Poisson distribution with mean

λci=ncpci, i.e., (Nc1,…,Nck)d≡(Xc1,…,Xck)|∑ki=1Xci=nc where d≡ means the equivalence of two distributions. Morris (1975) provided asymptotic results for the multinomial distribution using Poisson distributions conditioning on the total sum. We first propose our test statistic based on independent Poisson distributions (Xci)1≤i≤k and then we provide asymptotic results conditioning on the total sums, ∑ki=1Xci=nc. In the observational vector of independent Poisson variables, say Xc=(Xci)1≤i≤k with Xci∼Poisson(λci) for λci=ncpci, we define

and, to obtain an unbiased estimator for (4), we introduce

satisfying E(D)=||P1−P2||22. Theorem 1 and Corollary 2 will show that the normalized form D√ˆVar(D) for some estimator ˆVar(D)

has the asymptotic normal distribution for multinomial vector. The Euclidean distance is commonly used for testing the equality of mean vectors of multivariate normal distributions or factor models with some moment conditions. See Bai and Saranadasa (1995) and Chen and Qin (2010). In the context of testing in contingency tables, the idea for the chi-square distribution is to consider the goodness of fit for each cell using standardized quantities under the null hypothesis,

pis. In our context, the sparse multinomial data are from small probabilities in most of cells, so chi-square approximation to each cell may not be desirable. On the other hand, our proposed tests based on D in (6) first aggregate estimates of (p1i−p2i)2 and then consider the normalization of D. This difference will lead to different performance between our proposed test and the test (3).

Let Nc be independent multinomial random vectors for c=1,2 such as M(nc,Pc,k) where Nc=(Nci)1≤i≤k and Pc=(pci)1≤i≤k for c=1,2. Suppose the following conditions are satisfied: for n=n1+n2,

The proof of Theorem 1 will be provided in section 4 with a series of lemmas. ∎

In Theorem 1,∑ni=1f∗(N1i,N2i) is known, however σ2k is unknown, so we need to have some estimates of σ2k defined in (8) which have an asymptotically equivalent behavior. Our proposed test is constructed under the null hypothesis H0: P1=P2. For derivation of σ2k, see the proof of Lemma 2 in section 4. In practice, we need some estimate of σ2k based on multinomial data Nc for c=1,2. We propose an estimator of σ2k which is

where pi=n1p1i+n2p2in1+n2 and ^pci=Ncinc. Lemma 1 states that the proposed estimator of σ2k has the property of ratio consistency.

Based on the estimators ^σ2k, we define the following two test statistics, namely T;

where f∗ is defined in (5). From Theorem 1 and Lemma 1, T is asymptotic normal under the H0. We state this in the following corollary.

Corollary 1 shows that our proposed test is available for practical use under fairly mild conditions 1−3 of Theorem 1. Based on Corollary 1, we reject H0 if

where z1−α is the 1−αquantile of a standard normal distribution. In practice, our test requests only conditions 1−3 of Theorem 1 to have asymptotic size α test for a given α∈(0,1). Additionally, it is of interest to investigate the power function of our proposed tests. In particular, the power function from Theorem 1 is meaningful when the signal-to-noise ratio SNR≡||ξ||22/σk for ξ=P1−P2 is bounded, i.e., SNR=O(1). which is the case that the asymptotic power is non-trivial in the sense that the power is in (0,1). Condition 4 in Theorem 1 is equivalent to the condition that the SNR is bounded by some constant as k→∞.

Under the conditions in Theorem 1, we have

for a standard normal random variable

Z and z1−α is the (1−α) quantile of a standard normal distribution.

It is clear that under H0, the proposed test is asymptotically size-α test since ||P1−P2||=0 under H0.

In the following section, we provide the proof of Theorem 1.

4 Asymptotic Normality of the proposed tests

In this section we prove Theorem 1. The main difficulty is the dependency imposed by the multinomial distribution. In other words, f∗(N1i,N2i)s are not independent since Ncis have dependency for 1≤i≤k

(Nc1,Nc2,…,Nck) has the same distribution as (Xc1,…,Xck)|∑ki=1Xci=nc where Xcis are independent Poisson random variables with mean λci=ncpci. Before we present our main results, we first define the following notations:

, the conditional characteristic function of

We will show the uniform equicontinuity of the characteristic function in Lemma 3.

The following Lemmas, 2 and 3, will be used in showing the asymptotic multivariate normality of (Fk,U1k,U2k) and the uniform equicontinuity of the characteristic function of Fk conditioning on U1k=0 and U2k=0.

In fact, the uniform equicontinuity of characteristic function becomes

and it is sufficient to show that the last expression converges to 0.

The following lemma ensures that the convergence of characteristic function of ∑ki=1f(X1i,X2i) based on independent Poisson distributions conditioning on ∑ki=1X1i and ∑ki=1X2i which come from multinomial distributions.

The following lemma shows that ∑ki=1f(X1i,X2i) has the asymptotic normality when Xcis are independent poisson distributions.

Based on the lemmas, we prove Theorem 1. In fact, Theorem 1 is the case when independent poisson random variables Xcis in Lemma 4 can be replaced by the multinomial distributions Ncis.