The "double descent" risk curve was recently proposed to qualitatively describe the out-of-sample prediction accuracy of variably-parameterized machine learning models. This article provides a precise mathematical analysis for the shape of this curve in two simple data models with the least squares/least norm predictor. Specifically, it is shown that the risk peaks when the number of features p is close to the sample size n, but also that the risk decreases towards its minimum as p increases beyond n. This behavior is contrasted with that of "prescient" models that select features in an a priori optimal order. 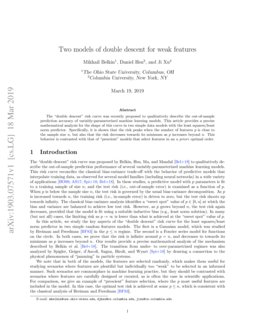 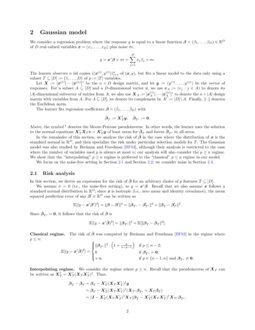 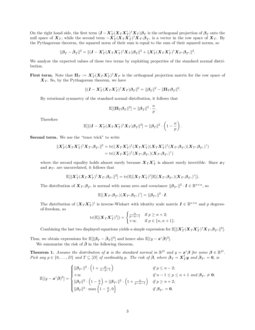 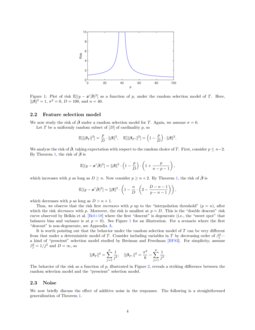 A Brief Prehistory of Double Descent

We investigate double descent more deeply and try to precisely characterize the phenomenon under different settings. Specifically, we focus on the impact of label noise and regularization on double descent. None of the existing works consider these aspects in detail and we hypothesize that these play an integral role in double descent.

The “double descent” risk curve was proposed by *belkin2018reconciling to qualitatively describe the out-of-sample prediction performance of several variably-parameterized machine learning models. This risk curve reconciles the classical bias-variance trade-off with the behavior of predictive models that interpolate training data, as observed for several model families (including neural networks) in a wide variety of applications bos1998dynamics,advani2017high,spigler2018jamming,belkin2018reconciling. In these studies, a predictive model with

p parameters is fit to a training sample of size n, and the test risk (i.e., out-of-sample error) is examined as a function of p. When p is below the sample size n, the test risk is governed by the usual bias-variance decomposition. As p is increased towards n, the training risk (i.e., in-sample error) is driven to zero, but the test risk shoots up towards infinity. The classical bias-variance analysis identifies a “sweet spot” value of p∈[0,n] at which the bias and variance are balanced to achieve low test risk. However, as p grows beyond n, the test risk again decreases, provided that the model is fit using a suitable inductive bias (e.g., least norm solution). In many (but not all) cases, the limiting risk as p→∞ is lower than what is achieved at the “sweet spot” value of p.

In this article, we study the key aspects of the “double descent” risk curve for the least squares/least norm predictor in two simple random features models. The first is a Gaussian model, which was studied by breiman1983many in the p≤n regime. The second is a Fourier series model for functions on the circle. In both cases, we prove that the risk is infinite around p=n, and decreases to towards its minimum as p increases beyond n. Our results provide a precise mathematical analysis of the mechanism described by belkin2018reconciling. The transition from under- to over-parametrized regimes was also analyzed by *spigler2018jamming by drawing a connection to the physical phenomenon of “jamming” in particle systems.

p most useful features are included in the model. In this case, the optimal test risk is achieved at some p≤n, which is consistent with the classical analysis of breiman1983many.

We consider a regression problem where the response y is equal to a linear function β=(β1,…,βD)∈RD of D real-valued variables x=(x1,…,xD) plus noise σϵ:

be the vector of responses. For a subset

A⊆[D] and a D-dimensional vector v, we use vA:=(vj:j∈A) to denote its |A|-dimensional subvector of entries from A; we also use XA:=[x(1)A|⋯|x(n)A]T to denote the n×|A| design matrix with variables from A. For A⊆[D], we denote its complement by Ac:=[D]∖A. Finally, ∥⋅∥ denotes the Euclidean norm.

Above, the symbol † denotes the Moore-Penrose pseudoinverse. In other words, the learner uses the solution to the normal equations XTTXTv=XTTy of least norm for ^βT and forces ^βTc to all-zeros.

In the remainder of this section, we analyze the risk of ^β in the case where the distribution of x is the standard normal in RD, and then specialize the risk under particular selection models for T. The Gaussian model was also studied by breiman1983many, although their analysis is restricted to the case where the number of variables used p is always at most n; our analysis will also consider the p≥n regime. We show that the “interpolating” p≥n regime is preferred to the “classical” p≤n regime in our model.

In this section, we derive an expression for the risk of ^β for an arbitrary choice of p features T⊆[D].

We assume σ=0 (i.e., the noise-free setting), so y=xTβ. Recall that we also assume x

follows a standard normal distribution in

RD; since x is isotropic (i.e., zero mean and identity covariance), the mean squared prediction error of any β′∈RD can be written as

Since ^βTc=0, it follows that the risk of ^β is

The risk of ^β was computed by breiman1983many in the regime where p≤n:

We consider the regime where p≥n. Recall that the pseudoinverse of XT can be written as X†T=XTT(XTXTT)†. Thus,

We analyze the expected values of these two terms by exploiting properties of the standard normal distribution.

Note that ΠT:=XTT(XTXTT)†XT is the orthogonal projection matrix for the row space of XT. So, by the Pythagorean theorem, we have

By rotational symmetry of the standard normal distribution, it follows that

We use the “trace trick” to write

The distribution of XTcβTc is normal with mean zero and covariance ∥βTc∥2⋅I∈Rn×n, so

We summarize the risk of ^β in the following theorem.

We now study the risk of ^β under a random selection model for T. Again, we assume σ=0.

Let T be a uniformly random subset of [D] of cardinality p, so

We analyze the risk of ^β, taking expectation with respect to the random choice of T. First, consider p≤n−2. By Theorem 1, the risk of ^β is

which increases with p as long as D≥n. Now consider p≥n+2. By Theorem 1, the risk of ^β is

which decreases with p as long as D>n+1.

Thus, we observe that the risk first increases with p up to the “interpolation threshold” (p=n), after which the risk decreases with p. Moreover, the risk is smallest at p=D. This is the “double descent” risk curve observed by belkin2018reconciling where the first “descent” is degenerate (i.e., the “sweet spot” that balances bias and variance is at p=0). See Figure 1 for an illustration. For a scenario where the first “descent” is non-degenerate, see Appendix A.

It is worth pointing out that the behavior under the random selection model of T can be very different from that under a deterministic model of T. Consider including variables in T by decreasing order of β2j—a kind of “prescient” selection model studied by breiman1983many. For simplicity, assume β2j=1/j2 and D=∞, so

The behavior of the risk as a function of p, illustrated in Figure 2, reveals a striking difference between the random selection model and the “prescient” selection model.

We now briefly discuss the effect of additive noise in the responses. The following is a straightforward generalization of Theorem 1.

Assume the distribution of x is the standard normal in RD, ϵ

is a standard normal random variable independent of

A similar analysis with a random selection model for T can be obtained from Theorem 2.

where ω:=exp(−2πi/D) is a primitive root of unity. Let μ:=Fβ for some β∈CD. Consider the following observation model:

This can be regarded as a one-dimensional version of the random Fourier features model studied by rahimi2008random for functions defined on the unit circle.

One important property of the discrete Fourier transform matrix that we use is that the matrix FA,B has rank min{|A|,|B|} for any A,B⊆[D]. This is a consequence of the fact that F is Vandermonde. Thus, for p≥n, we have

In the remainder of this section, we analyze the risk of ^β under a random model for β, where

(which implies E[∥β∥2]=1). The random choice of β is independent of S and T. Considering the risk under this random model for β is a form of average-case analysis. For simplicity, we only consider the regime where p≥n, as it suffices to reveal some key aspects of the risk of ^β.

Following the arguments from Section 2.1, we have

Now we take (conditional) expectations with respect to β, given S and T:

Since FS,T has rank n, the first trace expression is equal to

For the second trace expression, we use the explicit formula for F†S,T and the fact that FS,TF∗S,T+FS,TcF∗S,Tc=I to obtain

FS,TcF∗S,Tc. Therefore, from Equation 1, we have

A precise characterization of (∗) is difficult to obtain. Under a slightly different model, in which membership in S (respectively, T) is determined by independent Bernoulli variables with mean n/D (respectively, p/D), we can use asymptotic arguments to characterize the empirical eigenvalue distribution for FS,TF∗S,T.111We can also derive essentially the same formula for the risk under this Bernoulli model, although the derivation is somewhat more cumbersome since we do not always have |T|≥|S| even if E|T|≥E|S|. Hence, we have opted to present the derivation only for the simpler model. Assuming the asymptotic equivalence of these random models for S and T, we find that the quantity (∗) approaches

This quantity diverges to +∞ as ρp→ρn, and decreases as ρp→1. This is the same behavior as in the Gaussian model from Section 2 with random selection; we depict it empirically in Figure 3.

Our analyses show that when features are chosen in an uninformed manner, it may be optimal to choose as many as possible—even more than the number of data—rather than limit the number to that which balances bias and variance. This choice is conceptually and algorithmically simple and avoids the need for precise control of regularization parameters. It is reminiscent of the practice in machine learning applications like image and speech recognition, where signal processing-based features are individually weak but in great abundance, and models that use all of the features are highly successful. This stands in contrast to scenarios where informed selection of features is possible; for example, in many science and medical applications, features are hand-crafted and purposefully selected. As illustrated by the “prescient” selection model, choosing the number of features to balance bias and variance can be better than incurring the costs that come with using all of the features. The best practices for model and feature selection thus crucially depend on which regime the application is operating under.

Appendix A Non-degenerate double descent in a Fourier series model

To observe the “double descent” risk curve where the first “descent” is non-degenerate, we consider a model in which the distribution of the feature vector x is non-isotropic; instead, x has a diagonal covariance matrix E[xx∗]=diag(t21,…,t2D) with decaying eigenvalues (e.g., t2i∝i−2). In such a scenario, it is natural to select features in decreasing order of the eigenvalues, as is done in principal components regression. Like random feature selection, this form of feature selection is also generally uninformed by the responses.

Formally, we let μ:=Fdiag(t1,…,tD)β for some β∈CD and positive sequence t1>t2>⋯, and use the same observation model as in Section 3, except that T is deterministically set to T:={1,…,p}. We fit ^β in the same manner as in Section 3. We are interested in the risk

which can be regarded as the mean squared error when x is drawn uniformly at random from the rows of the design matrix Fdiag(t1,…,tD).

We carried out the same simulation as from Figure 3 under the modified model, with t2i∝i−2 and ∑Di=1t2i=1. We chose β uniformly at random (once) from the unit sphere in RD for D=1024. Then, for each p, we computed ^β from 10 independent random choices of S (with n=256), and plotted the average value of ∑Dj=1t2j(βj−^βj)2. The plot is shown below. (The vertical axis is truncated for clarity; the curve peaks around p=n with value on the order of 1016.) 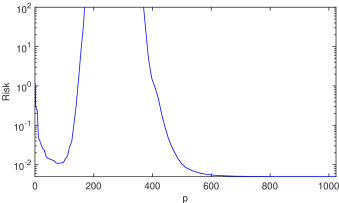 The plot shows the usual “U”-shaped curve arising from the bias-variance trade-off when p<n, and a second “descent” towards the overall minimum for p>n. This risk curve is qualitatively the same as those observed by belkin2018reconciling for neural networks and other predictive models.