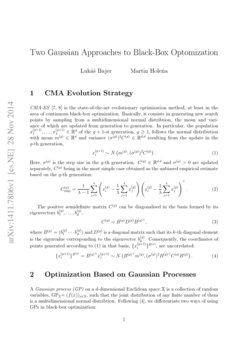 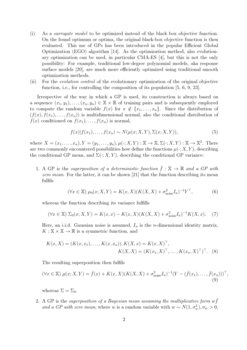 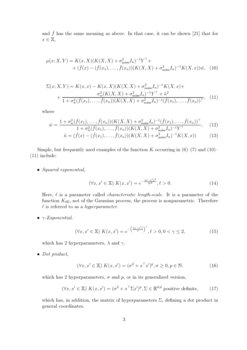 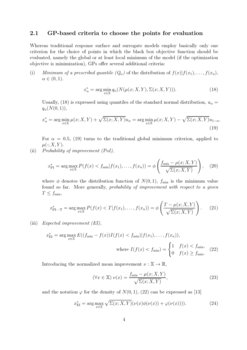 Landscape Analysis for Surrogate Models in the Evolutionary Black-Box Context

Many studies have been done to prove the vulnerability of neural network...
YiGui Luo, et al. ∙

is the state-of-the-art evolutionary optimization method, at least in the area of continuous black-box optimization. Basically, it consists in generating new search points by sampling from a multidimensional normal distribtion, the mean and variance of which are updated from generation to generation. In particular, the population

, follows the normal distribution with mean

can be diagonalised in the basis formed by its eigenvectors

-th diagonal element is the eigenvalue corresponding to the eigenvector

b(g)k. Consequently, the coordinates of points generated according to (1) in that basis, {x(g+1)i}B(g), are uncorrelated:

2 Optimization Based on Gaussian Processes

A Gaussian process (GP) on a d-dimensional Euclidean space X

is a collection of random variables, GP

, such that the joint distribution of any finite number of them is a multidimensional normal distribtion. Following

[4], we differentiate two ways of using GPs in black-box optimization:

Irrespective of the way in which a GP is used, its construction is always based on a sequence (x1,y1),…,(xn,yn)∈X×R of training pairs and is subsequently employed to compute the random variable f(x) for x∉{x1,…,xn}. Since the distribution of (f(x),f(x1),…,f(xn)) is multidimensional normal, also the conditional distribution of f(x) conditioned on f(x1),…,f(xn) is normal,

2.1 GP-based criteria to choose the points for evaluation

Whereas traditional response surface and surrogate models employ basically only one criterion for the choice of points in which the black box objective function should be evaluated, namely the global or at least local minimum of the model (if the optimization objective is minimization), GPs offer several additional criteria:

Directly connecting both considered Gaussian approaches is not possible because the normal distribution in CMA-ES is a distribution on the input space of the objective function (fitness), whereas the normal distribution in GPs is on the space of its function values. Nevertheless, it is still possible to achieve some synergy through using information from CMA-ES for the GP, and/or using information from the GP for CMA-ES. According to whoat was recalled at the beginning of Section 2, the latter possibility corresponds to using GP for the evolution control of CMA-ES.

3.1 Using Information from CMA-ES for the GP

We see 2 straightforward possibilities where some information from CMA-ES can be used in the GP.

We intend to test the following approaches to using GP for the evolution control of CMA-ES.