Quantum dialogue is a process of two way secure and simultaneous communication using a single channel. Recently, a Measurement Device Independent Quantum Dialogue (MDI-QD) protocol has been proposed (Quantum Information Processing 16.12 (2017): 305). To make the protocol secure against information leakage, the authors have discarded almost half of the qubits remaining after the error estimation phase. In this paper, we propose two modified versions of the MDI-QD protocol such that the number of discarded qubits is reduced to almost one-fourth of the remaining qubits after the error estimation phase. We use almost half of their discarded qubits along with their used qubits to make our protocol more efficient in qubits count. We show that both of our protocols are secure under the same adversarial model given in MDI-QD protocol. 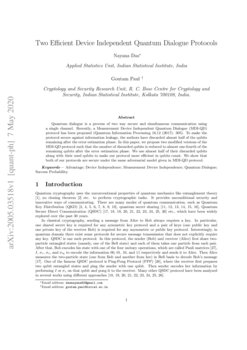 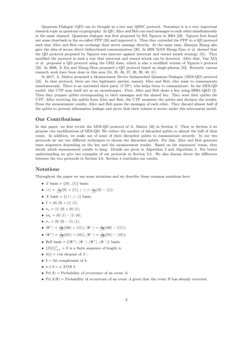 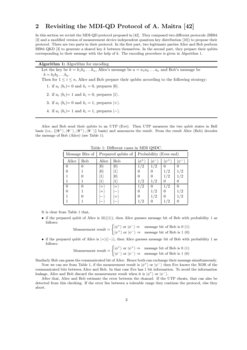 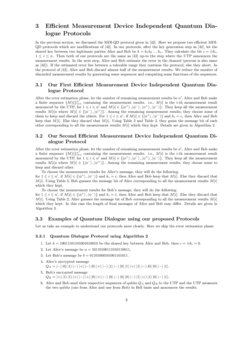 Improving the Security of "Measurement-Device-Independent Quantum Communication without Encryption"

With the emergence of quantum computing and quantum networks, many commu...
Shaokai Lin, et al. ∙

Hide and seek with quantum resources: New and modified protocols for quantum steganography

Steganography is the science of hiding and communicating a secret messag...
Rohan Joshi, et al. ∙

In classical cryptography, sending a message from Alice to Bob always requires a key. In particular, one shared secret key is required for any symmetric key protocol and a pair of keys (one public key and one private key of the receiver Bob) is required for any asymmetric or public key protocol. Interestingly, in quantum domain there exist some protocols for secure message transmission that does not explicitly require any key. QSDC is one such protocol. In this protocol, the sender (Bob) and receiver (Alice) first share two-particle entangled states (namely, one of the Bell state) and each of them takes one particle from each pair. After that, Bob encodes his state with one of the four unitary operations, which are called Pauli matrices [27], I, σz, σx, and σiy to encode the information 00, 01, 10, and 11 respectively and sends it to Alice. Then Alice measures the two-particle state (one from Bob and another from her) in Bell basis to decode Bob’s message [17]. One of the famous QSDC protocol is Ping-Pong Protocol (PPP) [28], where the receiver first prepares two qubit entangled states and ping the sender with one qubit. Then sender encodes her information by performing I or σz on that qubit and pong it to the receiver. Many other QSDC protocol have been analyzed in several works using different approaches [18, 19, 20, 21, 22, 23, 24, 25, 26].

Quantum Dialogue (QD) can be thought as a two way QSDC protocol. Nowadays it is a very important research topic in quantum cryptography. In QD, Alice and Bob can send messages to each other simultaneously in the same channel. Quantum dialogue was first proposed by BA Nguyen in 2004 [29]. Nguyen first found out some drawback in the so-called PPP [28] and improved it. Then they extended the PPP to a QD protocol such that Alice and Bob can exchange their secret message directly. At the same time, Zhanjun Zhang also gave the idea of secure direct bidirectional communication [30]. In 2005 MAN Zhong-Xiao et al. showed that the QD protocol proposed by Nguyen was insecure against intercept and resend attack strategy [31]. They modified the protocol in such a way that intercept and resend attack can be detected. After that, Yan XIA et al. proposed a QD protocol using the GHZ state, which is also a modified version of Nguyen’s protocol [32]. In 2006, Ji Xin and Zhang Shou proposed a QD protocol based on single-photon [33]. Recently various research work have been done in this area [34, 35, 36, 37, 38, 39, 40, 41].

In 2017, A. Maitra proposed a Measurement Device Independent Quantum Dialogue (MDI-QD) protocol [42]. In that protocol, there are two legitimate parties, namely Alice and Bob, who want to communicate simultaneously. There is an untrusted third party (UTP), who helps them to communicate. In the MDI-QD model, this UTP may itself act as an eavesdropper. First, Alice and Bob share a key using BB84 QKD [3]. Then they prepare qubits corresponding to their messages and the shared key. They send their qubits the UTP. After receiving the qubits from Alice and Bob, the UTP measures the qubits and declares the results. From the measurement results, Alice and Bob guess the messages of each other. They discard almost half of the qubits to prevent information leakage and prove that their scheme is secure under this adversarial model.

In this paper, we first revisit the MDI-QD protocol of A. Maitra [42] in Section 2. Then in Section 3 we propose two modifications of MDI-QD. We reduce the number of discarded qubits to almost the half of their count. In addition, we make use of some of their discarded qubits to communicate securely. In our two protocols we use two different techniques to choose the discarded qubits. For this, Alice and Bob generate some sequences depending on the key and the measurement results. Based on the sequences’ terms, they decide which measurement results to keep. Details are given in Algorithm 2 and Algorithm 3. For better understanding we give two examples of our protocols in Section 3.3. We also discuss about the difference between the two protocols in Section 3.6. Section 4 concludes our results.

Throughout the paper we use some notations and we describe those common notations here.

2 Revisiting the MDI-QD Protocol of A. Maitra [42]

In this section we revisit the MDI-QD protocol proposed in [42]. They composed two different protocols (BB84 [3] and a modified version of measurement device independent quantum key distribution [10]) to propose their protocol. There are two parts in their protocol. In the first part, two legitimate parties Alice and Bob perform BB84 QKD [3] to generate a shared key k between themselves. In the second part, they prepare their qubits corresponding to their message with the help of k. The encoding procedure is given in Algorithm 1.

Alice and Bob send their qubits to an UTP (Eve). Then UTP measures the two qubit states in Bell basis (i.e., {|Φ+⟩,|Φ−⟩,|Ψ+⟩,|Ψ−⟩} basis) and announces the result. From the result Alice (Bob) decodes the message of Bob (Alice) (see Table 1).

It is clear from Table 1 that,

Similarly Bob can guess the communicated bit of Alice. Hence both can exchange their message simultaneously.

After that, Alice and Bob estimate the error between the channel. If the UTP cheats, that can also be detected from this checking. If the error lies between a tolerable range they continue the protocol, else they abort.

In the previous section, we discussed the MDI-QD protocol given in [42]. Here we propose two efficient MDI-QD protocols which are modifications of [42]. In our protocols, after the key generation step as [42], let the shared key between two legitimate parties Alice and Bob be k=k1k2…kn. They calculate the bit c=⊕ki, 1≤i≤n. Then both of our protocols are the same as [42] up-to the step where the UTP announces the measurement results. In the next step, Alice and Bob estimate the error in the channel (process is also same as [42]). If the estimated error lies between a tolerable range they continue the protocol, else they abort. In the protocol of [42], Alice and Bob discard almost half of the measurement results. We reduce the number of discarded measurement results by generating some sequences and computing some functions of the sequences.

To choose the measurement results for Bob’s message, they will do the following: for 1≤i≤n′, if M[i]∈{|ϕ+⟩,|ψ−⟩} and ki=¯c, then Alice and Bob keep that M[i]. Else they discard that M[i]. Using Table 2, Alice guesses the message bit of Bob corresponding to all the measurement results M[i] which they kept. In this case the length of final messages of Alice and Bob may differ. Details are given in Algorithm 3.

Let us take an example to understand our protocols more clearly. Here we skip the error estimation phase.

3.4 Correctness of Our Proposed Protocols

In our proposed protocols, Alice and Bob first prepare qubits corresponding to their messages and shared key and then send those qubits to the third party (TP). After that, the UTP measures each two qubit state (one from Alice and one from Bob) in Bell basis and announces the result. Now, there may arise four cases and from help of Table 1 we can say the followings:

From the above knowledge, we construct Table 2, which contents the information of Alice’s guess about Bob’s message for different cases.

Similar thing happens for Bob too. So we construct Table 3, which contents the information of Bob’s guess about Alice’s message for different cases.

3.5 Security Analysis of Our Proposed Protocols

Our protocol is said to be secure if Adv(A)<ϵ, where ϵ is the security parameter.

We have an n bit key k=k1k2…kn and c=⊕ki, 1≤i≤n. Alice’s n bit message is a and Bob’s n bits message is b. Let there be l number of zeros in the finite sequence {X[q]}nq=1. The UTP knows the value of aj⊕bj if X[j]=0 (when X[j]=0, the UTP knows that the communicated bits of Alice and Bob are same or different). Let us consider the following.

In our first protocol, we keep the i-th (1⩽i⩽l) message pair (ei,fi) if k′i=c and discard the others. Let c1= Number of cases where k′i=c, 1⩽i⩽l. Let us define some events first.

by padding some random message bits.

So for a predefined security parameter ϵ, if l>max{1,12log(1ϵ)}, then Adv(A)<ϵ, i.e., our protocol is secure. We can also adjust the value of l by padding some random message bits.

3.6 Difference Between Our Two Protocols

Both of our proposed protocols for quantum dialogue are modifications of the quantum dialogue protocol given in [42]. In these protocols, the UTP measures each two qubit state (one from Alice and one from Bob) in Bell basis and announces the result. Alice and Bob make a finite sequence {M[i]}ni=1</sp