Through mathematical models, it is possible to turn a problem of the physical domain into the computational domain. In this context, the paper presents a two-dimensional mesh generator in generalized coordinates, which uses the Parametric Linear Spline method and partial differential equations. The generator is automated and able to treat real complex domains. The code was implemented in Python, applying the Numpy and Matplotlib libraries to matrix manipulations and graphical plots, respectively. Applications are made for monoblock meshes (two-dimensional shape of a bottle) and multi-block meshes (geometry of Igapó I lake, Londrina, Paraná, Brazil). 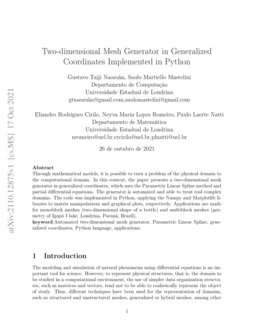 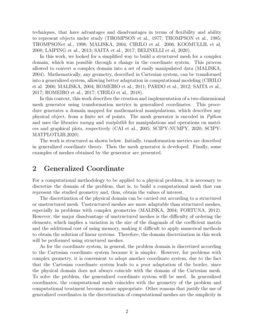 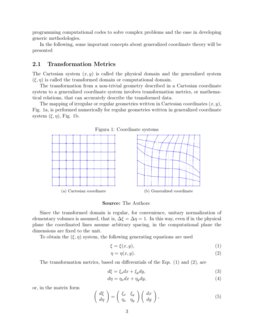 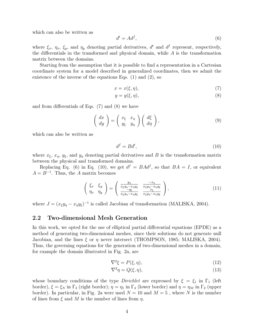 PEMesh: a Graphical Framework for the Analysis of the InterplayBetween Geometry and PEM Solvers

The modeling and simulation of natural phenomena using differential equations is an important tool for science. However, to represent physical structures, that is, the domain to be studied in a computational environment, the use of simpler data organization structures, such as matrices and vectors, tend not to be able to realistically represent the object of study. Thus, different techniques have been used for the representation of domains, such as structured and unstructured meshes, generalized or hybrid meshes, among other techniques, that have advantages and disadvantages in terms of flexibility and ability to represent objects under study (THOMPSON et al., 1977; THOMPSON et al., 1985; THOMPSONet al., 1998; MALISKA, 2004; CIRILO et al. 2006; KOOMULLIL et al, 2008; LAIPING et al., 2013; SAITA et al., 2017; BELINELLI et al, 2020).

In this work, we looked for a simplified way to build a structured mesh for a complex domain, which was possible through a change in the coordinate system. This process allowed to convert a complex domain into a set of easily manipulated data (MALISKA, 2004). Mathematically, any geometry, described in Cartesian system, can be transformed into a generalized system, allowing better adaptation in computational modeling (CIRILO et al. 2006; MALISKA, 2004; ROMEIRO et al., 2011; PARDO et al., 2012; SAITA et al., 2017; ROMEIRO et al., 2017; CIRILO et al., 2018).

In this context, this work describes the creation and implementation of a two-dimensional mesh generator using transformation metrics in generalized coordinates. This procedure generates a domain mapped for mathematical manipulations, which describes any physical object, from a finite set of points. The mesh generator is encoded in Python and uses the libraries numpy and matplotlib for manipulations and operations on matrices and graphical plots, respectively (CAI et al., 2005; SCIPY-NUMPY, 2020; SCIPY-MATPLOTLIB,2020).

The work is structured as shown below. Initially, transformation metrics are described in generalized coordinate theory. Then the mesh generator is developed. Finally, some examples of meshes obtained by the generator are presented.

For a computational methodology to be applied to a physical problem, it is necessary to discretize the domain of the problem, that is, to build a computational mesh that can represent the studied geometry and, thus, obtain the values of interest.

In the following, some important concepts about generalized coordinate theory will be presented

Since the transformed domain is regular, for convenience, unitary normalization of elementary volumes is assumed, that is, Δξ=Δη=1. In this way, even if in the physical plane the coordinated lines assume arbitrary spacing, in the computational plane the dimensions are fixed to the unit.

To obtain the (ξ,η) system, the following generating equations are used

The transformation metrics, based on differentials of the Eqs. (1) and (2), are

or, in the matrix form

where ξx, ηx, ξy, and ηy denoting partial derivatives, dt and df represent, respectively, the differentials in the transformed and physical domain, while A is the transformation matrix between the domains.

Starting from the assumption that it is possible to find a representation in a Cartesian coordinate system for a model described in generalized coordinates, then we admit the existence of the inverse of the equations Eqs. (1) and (2), so

where xξ, xη, yξ, and yη denoting partial derivatives and B is the transformation matrix between the physical and transformed domains.

where J=(xξyη−xηyξ)−1 is called Jacobian of transformation (MALISKA, 2004).

In this work, we opted for the use of elliptical partial differential equations (EPDE) as a method of generating two-dimensional meshes, since their solutions do not generate null Jacobian, and the lines ξ or η never intersect (THOMPSON, 1985; MALISKA, 2004). Thus, the governing equations for the generation of two-dimensional meshes in a domain, for example the domain illustrated in Fig. 2a, are

Solving the equations (12) and (13), in relation to the (x,y) coordinates, using the transformation metrics of the (ξ,η) system, then the coordinated lines can be generated in the directions ξ and η, inside the computational mesh, Fig. 2b, as in any other geometry, through the equations

Approximating the derivative terms of Eq. ( Ref eq27) by means of central differences, around P, we obtain

Thus, the numerical solution of the two-dimensional mesh generation equations, Eqs. (14) and (15), written according to the generic ϕ variable, Eq. (21), is given by

with derivatives present in J approximated by central differences.

Next, the mesh generator in generalized coordinates is presented.

For the creation of an automated procedure for mapping a geometry in Cartesian coordinates, through a generalized coordinate system, we chose to use the programming language Python.

The reason for this choice is due to the fact that Python is a general, free, open, and multiplatform language, which can allow the creation of extensions of the developed application, such as, for example, a graphical interface module, among others.

Regarding performance, it is necessary to use extra libraries, specific to numerical computing applications, to achieve satisfactory results at run time. Because it is a scripting language, that is, interpreted, the performance of an application written in Python tends to be inferior when compared to a compiled language, as is the case of the Fortran language. In Python, the tools available for matrix manipulation and linear algebra are limited and not optimized for the type of application that was intended to be developed. However, because the adopted language is modular, it is possible to use routines and libraries in compiled languages, in order to optimize more complex operations, such as those used for domain transformations (CAI et al., 2005).

For the creation of the mesh generator, the following libraries were used:

The additional modules employed are also free for use.

3.1 Description of the Algorithm Developed

For the definition and creation of a geometry mapped in generalized coordinates, it starts from a initial set of points that describe the border, that is, the physical contour. In this work, the Parametric Linear Spline method was chosen to interpolate the set of border points under study. Parametric Linear Spline equations (BURDEN et al., 2015) are

∀t∈[ti−1,ti], where s interpolating spline curve and t is the interpolated variable.

Having obtained the interpolating lines of the border, Eqs. (24) and (25), the number of partitions desired for each border must be defined.

Then, points of the Splines curves are selected, which define the new border of the approximate geometry. To do this, an approach is used to position the points by weighted average of the components of the border, ie

The values of pΓ1Γ3x, pΓ2Γ4x, pΓ1Γ3y, and pΓ2Γ4y indicate the weights on the left/right borders in x, top/bottom in x, left/right in y and top/bottom in y , respectively. The percentage weights in Eqs. (26) and (27) can better adjust the distribution of points in the domain, avoiding concentrations of points. In this way, the arrangement of the internal points is influenced by the edges.

Finally, on the set of ordered pairs, the resolution of the equation (

In summary, the implemented algorithm can be illustrated in this way:

Step 1. Reading the input data: Read the number of partitions from the physical and transformed planes, the weights for calculating the weighted average and the border points.

Step 3. Calculate the points of the Spline lines, using the weighted average formulas, and define the new border points.

The next two sections are intended to exemplify and test the algorithm. In the first applications, monoblock meshes are built (3 applications). Following a multiblock mesh is obtained. The multiblock technique consists of dividing the physical domain into parts and, on each of the parts, applying the generation of meshes in generalized coordinates. Such a procedure allows to better capture the complexity of the geometry compared to the strategy employed on a single block (CIRILO, 2006; PARDO et al., 2012, SAITA et al., 2017).

As a first application of the mesh generation algorithm, the set of input data presented in Table 1 was used. The weighted values for Γj, j= 1 and 3 are omitted, since they are known for complementarity, that is, pΓ1Γ3x+pΓ2Γ4x=1 e pΓ1Γ3y+pΓ2Γ4y=1.

Given the set of predefined points, Fig. 4a, the number of partitions and the weights at the borders, Table 1, then the border geometry is obtained by Parametric Spline Linear interpolation. In sequence, the algorithm calculates the new border points, using the given refinement. In this way, the algorithm starts to solve the transformation metrics, finally generating the mesh in generalized coordinates. Figs. 4b and 4c present the meshes in generalized coordinates, according to the refinements described in Table 1.

As a second application, a mesh in a doubly-connected domain was generated. The set of input data is shown in Table 2.

The latest generation of monoblock mesh is shaped like a bottle, as illustrated in Fig. 6. The set of input data is explained in Table 3.

Using the set of predefined points, Fig. 6a, and the input data in Table 3, the meshes in generalized coordinates are generated, as shown in Fig. 6b and Fig. 6c, according to the refinements described in Table 3.

In order to show a more complex application, points from the contour of Lake Igapó I, located in Londrina, Paraná, Brazil, were collected. The points were obtained from satellite images offered by the Google Earth software (GOOGLE, 2020). The generated mesh has the same scale as the physical domain.

In summary, the multiblock algorithm can be illustrated in this way:

Step 1. Loop condition: If there is a monoblock input file being passed as an argument, perform step 2. Otherwise, perform step 4.

Step 2. Monoblock mesh generation: Use the data present in the input file to generate the monoblock mesh.

For the geometry of Lago Igapo, it is considered that it consists of three blocks, Lake Igapó I (main block) and its two tributaries (two other blocks). The set of predefined points are given in Fig. 7a. The input data are presented in Table 4. As for the weighted average, the percentage weights (pΓ1Γ3 e pΓ2Γ4), in x and y, were all chosen as 0.5.

After executing the multiblock mesh algorithm, the meshes were obtained in generalized coordinates as shown in Figs. 7b and 7c, according to the refinements of Table 4.

In this work, using the generalized coordinate method, a mesh generator in Python was created and implemented. This automated mesh generator allowed the reproduction of complex geometries with several mesh refinements, as shown by the applications presented.

Specifically, as original contributions to this work, we highlight two aspects:

2- Python language. The Python programming language and the libraries used make it possible to optimize the algorithm, to facilitate the visualization of the meshes, and the portability of the application in different software architectures, such as Linux and Windows.