In Bayesian machine learning, the posterior distribution is typically computationally intractable, hence variational inference is often required. In this approach, an evidence lower bound on the log likelihood of data is maximized during training. Variational Autoencoders (VAE) are one important example where variational inference is utilized. In this tutorial, we derive the variational lower bound loss function of the standard variational autoencoder. We do so in the instance of a gaussian latent prior and gaussian approximate posterior, under which assumptions the Kullback-Leibler term in the variational lower bound has a closed form solution. We derive essentially everything we use along the way; everything from Bayes' theorem to the Kullback-Leibler divergence. 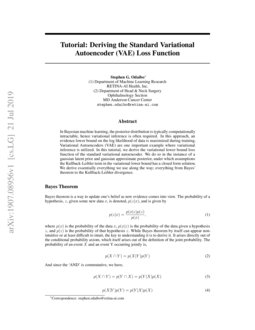 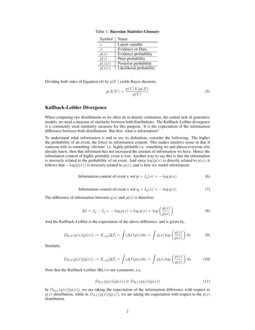 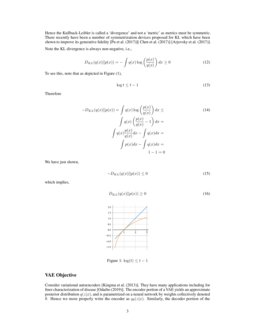 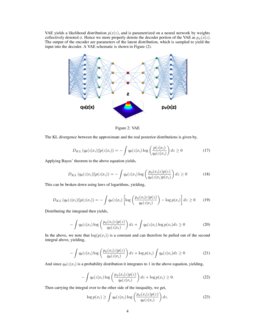 In recent years Variation Autoencoders have become one of the most popul...
Gautam Ramachandra, et al. ∙

A lower bound for the ELBO of the Bernoulli Variational Autoencoder

Many crucial problems in deep learning and statistics are caused by a va...
Łukasz Struski, et al. ∙

Bayes theorem is a way to update one’s belief as new evidence comes into view. The probability of a hypothesis,

And since the ‘AND’ is commutative, we have,

Dividing both sides of Equation (4) by p(Y) yields Bayes theorem,

The difference of information between q(x) and p(x) is therefore:

And the Kullback-Leibler is the expectation of the above difference, and is given by,

Note that the Kullback-Leibler (KL) is not symmetric, i.e,

Hence the Kullback-Leibler is called a ‘divergence’ and not a ‘metric’ as metrics must be symmetric. There recently have been a number of symmetrization devices proposed for KL which have been shown to improve its generative fidelity [Pu et al. (2017)][ Chen et al. (2017)] [Arjovsky et al. (2017)].

To see this, note that as depicted in Figure (1),

We have just shown,

Consider variational autoencoders [Kingma et al. (2013)]. They have many applications including for finer characterization of disease [Odaibo (2019)]. The encoder portion of a VAE yields an approximate posterior distribution q(z|x)

, and is parametrized on a neural network by weights collectively denoted

θ. Hence we more properly write the encoder as qθ(z|x). Similarly, the decoder portion of the VAE yields a likelihood distribution p(x|z), and is parametrized on a neural network by weights collectively denoted ϕ. Hence we more properly denote the decoder portion of the VAE as pϕ(x|z). The output of the encoder are parameters of the latent distribution, which is sampled to yield the input into the decoder. A VAE schematic is shown in Figure (2).

The KL divergence between the approximate and the real posterior distributions is given by,

Applying Bayes’ theorem to the above equation yields,

This can be broken down using laws of logarithms, yielding,

Distributing the integrand then yields,

In the above, we note that log(p(xi)) is a constant and can therefore be pulled out of the second integral above, yielding,

is a probability distribution it integrates to 1 in the above equation, yielding,

Then carrying the integral over to the other side of the inequality, we get,

Applying rules of logarithms, we get,

Recognizing the right hand side of the above inequality as Expectation, we write,

From Equation (23) it also follows that:

The right hand side of the above equation is the Evidence Lower Bound (ELBO) also known as the variational lower bound. It is so termed because it bounds the likelihood of the data which is the term we seek to maximize. Therefore maximizing the ELBO maximizes the log probability of our data by proxy. This is the core idea of variational inference, since maximization of the log probability directly is typically computationally intractable. The Kullback-Leibler term in the ELBO is a regularizer because it is a constraint on the form of the approximate posterior. The second term is called a reconstruction term because it is a measure of the likelihood of the reconstructed data output at the decoder.

Notably, we have some liberty to choose some structure for our latent variables. We can obtain a closed form for the loss function if we choose a gaussian representation for the latent prior p(z) and the approximate posterior, qθ(z|xi). In addition to yielding a closed form loss function, the gaussian model enforces a form of regularization in which the approximate posterior have variation or spread (like a gaussian).

then the KL or regularization term in the ELBO becomes:

Evaluating the term in the logarithm simplifies the above into,

This further simplifies into,

which further simplifies into,

Expressing the above as an Expectation we get,

And since the variance

σ2 is the expectation of the squared distance from the mean, i.e.,

From which it follows that the contribution from a given datum xi and a single stochastic draw towards the objective to be maximized is,

where σ2j and μj are parameters into the approximate distribution, q, and j

is an index into the latent vector

z. For a batch, the objective function is therefore given by,

where J is the dimension of the latent vector z, and L is the number of samples stochastically drawn according to re-parametrization trick.

Because the objective function we obtain in Equation (42) is to be maximized during training, we can think of it as a ‘gain’ function as opposed to a loss function. To obtain the loss function, we simply take the negative of G:

Therefore to train the VAE is to seek the optimal network parameters (θ∗,ϕ∗) that minimize L:

We have done a step-by-step derivation of the VAE loss function. We illustrated the essence of variational inference along the way, and have derived the closed form loss in the special case of gaussian latent.

The author thanks Larry Carin for helpful discussion on consequences of Kullback-Leibler divergence asymmetry, and on KL symmetrization approach.