We introduce and study the turnpike property for time-varying shapes, within the viewpoint of optimal control. We focus here on second-order linear parabolic equations where the shape acts as a source term and we seek the optimal time-varying shape that minimizes a quadratic criterion. We first establish existence of optimal solutions under some appropriate sufficient conditions. We then provide necessary conditions for optimality in terms of adjoint equations and, using the concept of strict dissipativity, we prove that state and adjoint satisfy the measure-turnpike property, meaning that the extremal time-varying solution remains essentially close to the optimal solution of an associated static problem. We show that the optimal shape enjoys the exponential turnpike property in term of Hausdorff distance for a Mayer quadratic cost. We illustrate the turnpike phenomenon in optimal shape design with several numerical simulations. 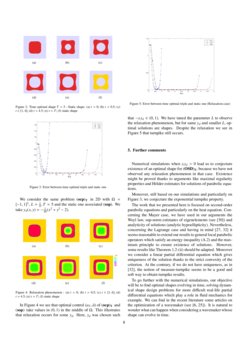 Optimal Control of the Kirchhoff Equation

One approach to understanding complex data is to study its shape through...
Lu Xian, et al. ∙

We start with an informal presentation of the turnpike phenomenon for general dynamical optimal shape problems. Let T>0. We consider the problem of determining a time-varying shape t↦ω(t) (viewed as a control, as in MR3350723 ) minimizing the cost functional

) may be a partial differential equation with various terminal and boundary conditions.

We associate to the dynamical problem (1)-(2) a static problem, not depending on time,

i.e., the problem of minimizing the instantaneous cost under the constraint of being an equilibrium of the control dynamics.

According to the well known turnpike phenomenon, one expects that, for T large enough, optimal solutions of (1)-(2) remain most of the time “close” to an optimal (stationary) solution of the static problem (3).

The turnpike phenomenon was first observed and investigated by economists for discrete-time optimal control problems (see turnpikefirst ; 10.2307/1910955 ). There are several possible notions of turnpike properties, some of them being stronger than the others (see MR3362209 ). Exponential turnpike properties have been established in GruneSchallerSchiela ; MR3124890 ; MR3616131 ; TrelatZhangZuazua ; MR3271298 for the optimal triple resulting of the application of Pontryagin’s maximum principle, ensuring that the extremal solution (state, adjoint and control) remains exponentially close to an optimal solution of the corresponding static controlled problem, except at the beginning and at the end of the time interval, as soon as T is large enough. This follows from hyperbolicity properties of the Hamiltonian flow. For discrete-time problems it has been shown in MR3217211 ; MR3654613 ; MR3782393 ; MR3470445 ; measureturnpikeTZ that exponential turnpike is closely related to strict dissipativity. Measure-turnpike is a weaker notion of turnpike, meaning that any optimal solution, along the time frame, remains close to an optimal static solution except along a subset of times of small Lebesgue measure. It has been proved in MR3654613 ; measureturnpikeTZ that measure-turnpike follows from strict dissipativity or from strong duality properties.

Applications of the turnpike property in practice are numerous. Indeed, the knowledge of a static optimal solution is a way to reduce significantly the complexity of the dynamical optimal control problem. For instance it has been shown in MR3271298 that the turnpike property gives a way to successfully initialize direct or indirect (shooting) methods in numerical optimal control, by initializing them with the optimal solution of the static problem. In shape design and despite of technological progress, it is easier to design pieces which do not evolve with time. Turnpike can legitimate such decisions for large-time evolving systems.

2 Shape turnpike for the heat equation

Throughout the paper, we denote by:

(which is also uniformly elliptic, see (MR2597943, , Definition Chapter 6)), not depending on t and with a constant of ellipticity θ>0 (for A written in nondivergence form), i.e.:

Moreover, θ is such that

where θ1 is the largest root of the polynomial P=X24min(1,Cp)−∥c∥L∞(Ω)X−∑di=1∥bi∥L∞(Ω)2 with Cp the Poincaré constant on Ω. This assumption is used to ensure that an energy inequality is satisfied with constants not depending on the final time T (see A for details).

We define AD as the differential operator A defined on the domain D(A) encoding Dirichlet conditions y|∂Ω=0 (when Ω is C2 or a convex polytop in R2, we have D(A)=H10(Ω)∩H2(Ω)). Let (λj,ϕj)j∈N∗ be the eigenelements of AD with (ϕj)j∈N∗ an orthonormal eigenbasis of L2(Ω):

A typical example sartisfying all assumptions above is the Dirichlet Laplacian, which we will consider in our numerical simulations.

We recall that the Hausdorff distance between two compact subsets K1,K2 of Rd is defined by

Let L∈(0,1). We define the set of admissible shapes

Let y0∈L2(Ω) and let γ1≥0,γ2≥0 be arbitrary. We consider the parabolic equation controlled by a (measurable) time-varying map t↦ω(t) of subdomains

Given T>0 and yd∈L2(Ω), we consider the dynamical optimal shape design problem (OSD)T  of determining a measurable path of shapes t↦ω(t)∈UL that minimizes the cost functional

We are going to compare the solutions of (OSD)T  and of (SSD)  when T is large.

which is also weak star compact. We define the convexified (or relaxed) optimal control problem (ocp)T  of determining a control t↦a(t)∈¯¯¯¯UL minimizing the cost

Note that the control a does not appear in the cost functionals of the above convexified control problems. Therefore the resulting optimal control problems are affine with respect to a. Once we have proved that optimal solutions a do exist, we expect that any minimizer will be an extremal point of the compact convex set ¯¯¯¯UL, which is exactly UL: if this is true, then actually a=χω with ω∈UL. Here, as it is usual in shape optimization, the interest of passing by the convexified problem is to allow us to derive optimality conditions, and thus to characterize the optimal solution. It is anyway not always the case that the minimizer a of the convexified problem is an extremal point of ¯¯¯¯UL (i.e., a characteristic function): in this case, we speak of a relaxation phenomenon. Our analysis hereafter follows these guidelines.

Taking a minimizing sequence and by classical arguments of functional analysis (see, e.g., MR0271512 ), it is straightforward to prove existence of solutions aT and ¯a respectively of (ocp)T and of (sop)  (see details in Section 3.1).

Our next task is to apply necessary optimality conditions to optimal solutions of the convexified problems, and infer from these necessary conditions that, under appropriate assumptions, the optimal controls are indeed characteristic functions.

Note that, if |{¯p=¯s}|=0, then it follows from (15) that the static optimal control ¯a is actually the characteristic function of a shape ¯ω∈UL and hence in that case we have existence of an optimal shape.

We distinguish between Lagrange and Mayer cases.

In what follows, we denote by

Integral turnpike in the Lagrange case

Measure-turnpike in the Lagrange case

We say that (yT,pT) satisfies the state-adjoint measure-turnpike property if for every ε>0 there exists Λ(ε)>0, independent of T, such that

We say that (OSD)T  is strictly dissipative at an optimal stationary point (¯y,¯ω) of (6) with respect to the supply rate function

if there exists a storage function S:E→R locally bounded and bounded below and a K-class function α(⋅) such that, for any T>0 and any 0<τ<T, the strict dissipation inequality

The exponential turnpike property is a stronger property and can be satisfied either by the state, by the adjoint or by the control or even by the three together.

In the Lagrange case, based on the numerical simulations presented in Section 4 we conjecture the exponential turnpike property, i.e., given optimal triples (yT,pT,χωT) and (¯y,¯p,¯ω), there exist C1>0 and C2>0 independent of T such that

We get using (17) that (y,a) is a weak solution of (7). The pair (y,a) is then admissible. Since H10(Ω) is compactly embedded in L2(Ω) and by using the Aubin-Lions compactness Lemma (see aubinlions ), we obtain

We get then by weak lower semi-continuity of JT and of the volume constraint, and by the Fatou Lemma that

hence a an optimal control for (ocp)T, that we rather denote by aT (and ¯a for (sop)).

We next proceed by proving existence of optimal shape designs.

1- We take γ1=0,γ2=1 (Mayer case). We consider an optimal triple (yT,pT,aT) of (OSD)T. Then it satisfies (12) and (14). It follows from the properties of the parabolic equation and from the assumption of analytic hypoellipticity that pT is analytic on (0,T)×Ω and that all level sets {pT(t)=α} have zero Lebesgue measure. We conclude that the optimal control aT satisfying (12)-(14) is such that

i.e., aT(t) is a characteristic function. Hence, for a Mayer problem (OSD)T, existence of an optimal shape is proved.

We use a similar argument thanks to maximum principle for parabolic equations (see (MR2597943, , sec. 7.1.4)) for existence of an optimal shape solution of (OSD)T.

Uniqueness of ¯a=χ¯ω and of aT=χωT comes from the fact that the cost functionals of (ocp)T  and (sop)  are strictly convex whatever (γ1,γ2)≠(0,0) may be. Uniqueness of (¯y,¯p) follows by application of the Poincaré inequality and uniqueness of (yT,pT) follows from (36).

The two terms at the left-hand side are positive and using the inequality (35) with ψ(t)=~p(T−t), we finally obtain

(i) Strict dissipativity is established thanks to the storage function S(y)=(y,¯p) where ¯p is the optimal adjoint. Since ∥y∥L∞((0,T)×Ω)<M, the storage function S is locally bounded and bounded from below. Indeed, we consider an admissible pair (y(⋅),χω(⋅)) satisfying (5), we multiply it by ¯p and we integrate over Ω. Then we integrate in time on (0,T), we use the optimality conditions of static problem (12) and we get the strict dissipation inequality (16) with α(s)=s2:

(ii) Now we prove that strict dissipativity implies measure-turnpike, by following an argument of measureturnpikeTZ . Applying (21) to the optimal solution (yT,ωT) at τ=T, we get