The Turing Award is recognized as the most influential and prestigious award in the field of computer science(CS). With the rise of the science of science (SciSci), a large amount of bibliographic data has been analyzed in an attempt to understand the hidden mechanism of scientific evolution. These include the analysis of the Nobel Prize, including physics, chemistry, medicine, etc. In this article, we extract and analyze the data of 72 Turing Award laureates from the complete bibliographic data, fill the gap in the lack of Turing Award analysis, and discover the development characteristics of computer science as an independent discipline. First, we show most Turing Award laureates have long-term and high-quality educational backgrounds, and more than 61 have a degree in mathematics, which indicates that mathematics has played a significant role in the development of computer science. Secondly, the data shows that not all scholars have high productivity and high h-index; that is, the number of publications and h-index is not the leading indicator for evaluating the Turing Award. Third, the average age of awardees has increased from 40 to around 70 in recent years. This may be because new breakthroughs take longer, and some new technologies need time to prove their influence. Besides, we have also found that in the past ten years, international collaboration has experienced explosive growth, showing a new paradigm in the form of collaboration. It is also worth noting that in recent years, the emergence of female winners has also been eye-catching. Finally, by analyzing the personal publication records, we find that many people are more likely to publish high-impact articles during their high-yield periods. 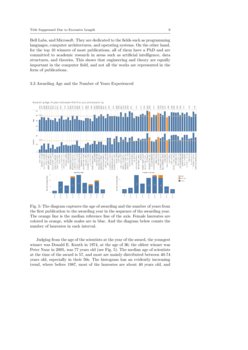