Co-occurence networks can be adequately modeled by hyper-bag-graphs (hb-graphs for short). A hb-graph is a family of multisets having same universe, called the vertex set. An efficient exchange-based diffusion scheme has been previously proposed that allows the ranking of both vertices and hb-edges. In this article, we extend this scheme to allow biases of different kinds and explore their effect on the different rankings obtained. The biases enhance the emphasize on some particular aspects of the network. 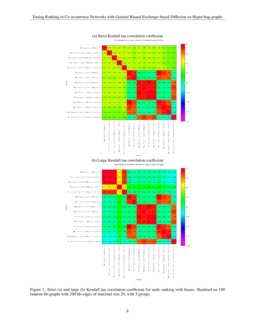 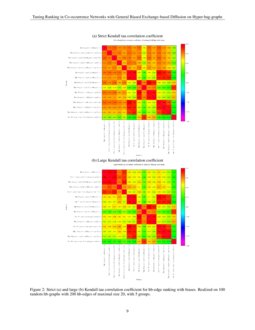 A (vertex) ℓ-ranking is a labelling φ:V(G)→ℕ of the vertices of a graph ...
Prosenjit Bose, et al. ∙

Edge-based analysis of networks: Curvatures of graphs and hypergraphs

The relations, rather than the elements, constitute the structure of net...
Marzieh Eidi, et al. ∙

When Maximum Stable Set can be solved in FPT time

Rethinking the Setting of Semi-supervised Learning on Graphs

Co-occurrence network can be modeled efficiently by using hyper-bag-graphs (hb-graphs for short) introduced in [1]. Depending on the information the co-occurrence network carries, the ranking of the information hold by the associated hb-graph has to be performed on different features, and the importance stressed on the lower, higher or medium values. Hence, the necessity of extending the exchange-based diffusion that is already coupled to a biased random walk given in [2] to a more general approach using biases. We start by giving the background in Section 2. We then propose a framework to achieve such a kind of diffusion in Section 3 and evaluate it in Section 4, before concluding in Section 5.

A hb-graph H=(V,E) is a family of multisets of same universe The elements of E are called the hb-edges; each hb-edge ej, is a multiset of universe V and of multiplicity function: mej:V→R+. The m-cardinality #mej of a hb-edge is: For more information on hb-graphs, the interested reader can refer to [3] for a full introduction. A weighted hb-graph has hb-edges having a weight given by: we:E→R+.

In [4], the authors introduce an abstract information function f:V→R+

which is associated to a probability for each vertex

vi∈V: In [5], a bias is introduced in the transition probability of a random walk in order to explore communities in a network. The bias is either related to a vertex property xi such as the degree or to an edge property yj such as the edge multiplicity or the shortest path betweenness. For a vertex, the new transition probability between vertex vi and vj is given by: Tij(x,β)=aijeβxi∑laljeβxl,where is the adjacency matrix of the graph and β is a parameter.

A same kind of bias, can be used related to the edges and can be combined to the former to have the overall transition probability from one vertex to another.

We consider a weighted hb-graph H=(V,E,we) with and we write the incidence matrix of the hb-graph.

The vertex abstract information function is defined as the function: FV:V→R+ such that: The probability corresponding to this hb-edge based vertex abstract information as: pfV(ej|vi)Δ=fV(vi,ej)FV(vi). If we now consider a vertex bias function: gV:R+→R+ applied to fV(vi,ej), we can define a biased probability on the transition from vertices to hb-edges as:

where GV(vi), the vertex overall bias, is defined as:

A two-phase step diffusion by exchange is now considered—with a similar approach to [6, 2]—, taking into account the biased probabilities on vertices and hb-edges.

The vertices hold an information value at time t given by: αt:{V→[0;1]vi↦αt(vi).

The hb-edges hold an information value at time t given by: ϵt:{E→[0;1]ej↦ϵt(ej).

the row state vector of the vertices at time

The initialisation is done such that I0(H)=1. At the diffusion process start, the vertices concentrate uniformly and exclusively all the information value. Writing αref=1|V|, we set for all vi∈V: α0(vi)=αref and for all ej∈E, ϵ0(ej)=0.

At every time step, the first phase starts at time t and ends at t+12, where values held by the vertices are shared completely to the hb-edges, followed by the second phase between time t+12 and t+1, where the exchanges take place the other way round. The exchanges between vertices and hb-edges aim at being conservative on the global value of αt and ϵt distributed over the hb-graph.

During the first phase between time t and time t+12, the contribution to the value ϵt+12(ej) from the vertex vi is given by:

We introduce the vertex overall bias matrix: and the biased vertex-feature matrix: It holds:

During the second phase that starts at time t+12, the values held by the hb-edges are transferred to the vertices. The contribution to αt+1(vi) given by a hb-edge ej is proportional to ϵt+12 in a factor corresponding to the biased probability ˜pE(vi|ej):

Similar to the one of the first phase for αt+12(vi).

Similar to the one for the first phase.

We now introduce the diagonal matrix of size p×p and the biased hb-edge-feature matrix: it comes:

It is valuable to keep a trace of the intermediate state: PE,t+12=PV,tG−1VBV as it records the information on hb-edges.

is a square row stochastic matrix of dimension

Let: and: A and B are non-negative rectangular matrices. Moreover:

Hence AB is a non-negative square matrix with its row sums all equal to 1: it is a row stochastic matrix.

Assuming that the hb-graph is connected, the biased feature exchange-based diffusion matrix T is aperiodic and irreducible.

This stochastic matrix is aperiodic, due to the fact that any vertex of the hb-graph retrieves a part of the value it has given to the hb-edge, hence tii>0 for all . Moreover, as the hb-graph is connected, the matrix is irreducible as any state can be joined from any other state.

associated to the eigenvalue 1 of

T. Nonetheless, due to the presence of the different functions for vertices and hb-edges, the simplifications do not occur anymore as in [6, 2] and thus we do not have an explicit expression for the stationary state vector of the vertices.

The same occurs for the expression of the hb-edge stationary state vector πE which is still calculated from πV using the following formula: πE=πVG−1VBV.

We consider different biases on a randomly generated hb-graph using still the same features that in the exchange-based diffusion realized in [6, 2]. We generate hb-graphs with 200 collaborations—built out of 10,000 potential vertices—with a maximum m-cardinality of 20, such that the hb-graph has five groups that are generated with two of the vertices chosen out of a group of 10, that have to occur in each of the collaboration; there are 20 vertices that have to stand as central vertices, i.e. that ensures the connectivity in between the different groups of the hb-graph.

We compare the rankings obtained on vertices and hb-edges after 200 iterations of the exchange-based diffusion using the strict and large Kendall tau correlation coefficients for the different biases proposed in Table 2. We present the results as a visualisation of correlation matrices in Figure 1 and in Figure 2, lines and columns of these matrices being ordered by the experiment index presented in Table 2.

Experiments 2 and 3 lead to rankings that are well correlated with the reference ranking given the large Kendall tau correlation coefficient value. The higher value of τL(σi,σj) compared to the one of τ(σi,σj) marks the fact that the rankings with pair of similar biases agree with the ties in this case. The exponential bias yields to a ranking that is more granular in the tail for vertices, and reshuffles the way the hb-edges are ranked; similar observations can be done for both the vertex and hb-edge rankings in Experiments 2 and 3.

In Experiments 4 and 5, the rankings remain well correlated with the reference ranking but the large Kendall tau correlation coefficient values show that there is much less agreement on the ties, but it is very punctual in the rankings, with again more discrimination with an exponential bias. This slight changes imply a reshuffling of the hb-edge rankings in both cases, significantly emphasized by the exponential form.

. It would need further investigations using the Jaccard index.

Biases with same monotony variations—gt(x)=x2 and gt(x)=e2x on the one hand and gt(x)=x0.2 and gt(x)=e−2x on the other hand—have similar effects independently of their application to vertices xor to hb-edges. It is also worth to remark that increasing biases lead to rankings that have no specific agreement or disagreement with rankings of decreasing biases—as it is shown with τL(σi,σj) and τ(σi,σj) for

Finally, we conduct two more experiments—Experiments 14 and 15—combining the biases gt(x)=e2x and gt(x)=e−2x in two different manners. With no surprise, they reinforce the disagreement with the reference ranking both on vertices and hb-edges, with a stronger disagreement when the decreasing bias is put on vertices. We can remark that Experiment 14—gV(x)=e2x and gE(x)=e−2x—has the strongest correlations with the rankings of dissimilar biases that are either similar to the one of vertices—Experiments 6 and 7— or to the one of hb-edges—Experiments 12 and 13.

A last remark is on the variability of the results: if the values of the correlation coefficients change, from one hb-graph to another, the phenomenon observed remains the same, whatever the first hb-graph observed; however, the number of experiments performed ensures already a minimized fluctuation in these results.

The biased-exchange-based diffusion proposed in this Chapter enhances a tunable diffusion that can be integrated into the hb-graph framework to tune adequately the ranking of the facets. The results obtained on randomly generated hb-graphs have still to be applied to real hb-graphs, with the known difficulty of the connectedness: it will be addressed in future work. There remains a lot to explore on the subject in order to refine the query results obtained with real searches. The difficulty remains that in ground truth classification by experts, only a few criteria can be retained, that ends up in most cases in pairwise comparison of elements, and, hence, does not account for higher order relationships.