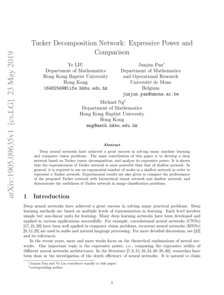 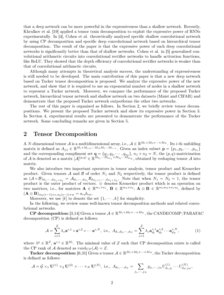 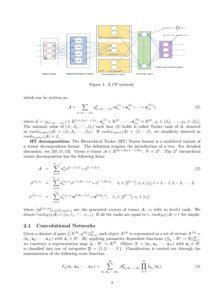 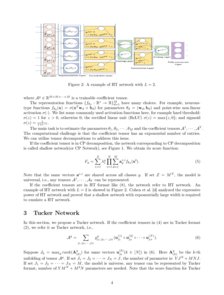 are used in audio and natural language processing. For more detailed discussions, see

Although many attempts in theoretical analysis success, the understanding of expressiveness is still needed to be developed. The main contribution of this paper is that a new deep network based on Tucker tensor decomposition is proposed. We analyze the expressive power of the new network, and show that it is required to use an exponential number of nodes in a shallow network to represent a Tucker network. Moreover, we compare the performance of the proposed Tucker network, hierarchical tensor network and shallow network on two datasets (Mnist and CIFAR) and demonstrate that the proposed Tucker network outperforms the other two networks.

The rest of this paper is organized as follows. In Section 2, we briefly review tensor decompositions. We present the proposed Tucker network and show its expressive power in Section 3. In Section 4, experimental results are presented to demonstrate the performance of the Tucker network. Some concluding remarks are given in Section 5.

We also introduce two important operators in tensor analysis, tensor product and Kronecker product. Given tensors A and B of order N1 and N2 respectively, the tensor product is defined as (A∘B)d1,⋯,dN1+N2=Ad1,⋯,dN1BdN1+1,⋯,dN1+N2. Note that when N1=N2=1

, the tensor product is the outer product of vectors.

In the following, we review some well-known tensor decomposition methods and related convolutional networks.

CP decomposition: [3, 14] Given a tensor A∈RM1×M2×⋯×MN, the CANDECOMP/PARAFAC decomposition (CP) is defined as follows:

where λy∈RZ, az,i∈RMi. The minimal value of Z such that CP decomposition exists is called the CP rank of A denoted as rankCP(A)=Z.

which can be written as,

is classified into one of categories

Y={1,2,⋯,Y}. Classification is carried out through the maximization of the following score function:

where Ay∈RM×M×⋯×M is a trainable coefficient tensor.

have many choices. For example, neurons-type functions

The main task is to estimate the parameters

If the coefficient tensor is in CP decomposition, the network corresponding to CP decomposition is called shallow network(or CP Network), see Figure 1. We obtain its score function:

Note that the same vectors az,i are shared across all classes y. If set Z=MN, the model is universal, i.e., any tensors A1,⋯,AY can be represented.

If the coefficient tensors are in HT format like (8), the network refer to HT network. An example of HT network with L=2 is showed in Figure 2. Cohen et al. [4] analyzed the expressive power of HT network and proved that a shallow network with exponentially large width is required to emulate a HT network.

In this section, we propose a Tucker network. If the coefficient tensors in (4) are in Tucker format (2), we refer it as Tucker network, i.e.,

Suppose Jk=maxyrank(Ay(k)) for same vectors u(k)jk(k∈[N]) in (6). Here Ay(k) be the k-th unfolding of tensor Ay. If set J1=J2=⋯=JN=J, the number of parameter is: YJN+MNJ. If set J1=J2=⋯=JN=M, the model is universe, any tensor can be represented by Tucker format, number of YMN+M2N parameters are needed. Note that the score function for Tucker network:

The Tucker network architecture is given in Figure 3. The outputs from convolution layer are

where ⟨⋅⟩ is tensor scalar product, i.e., the sum of entry-wise product of two tensors. Because Gy is a N order tensor of smaller dimension J1×⋯×JN, it can be further decomposed with a deeper network. In this sense, Tucker network is also a kind of deep network.

The following theorem demonstrates the expressive power of Tucker network.

Let Ay be a tensor of order N and dimension M in each mode, generated by Tucker form in (6). Define r=maxp,q[G](p,q) for all possible subsets p,q, consider the space of all possible configurations for parameters. In the space, Ay will have CP rank of at least r almost everywhere, i.e.,the Lebesgue measure of the space whose CP rank is less than r is zero.

The proof can be found in the supplementary section. We remark that if J1=J2=⋯=JN=J, when N is even, the Lebesgue measure of the Tucker format space whose CP rank is less than JN2 is zero; when N

is odd, the Lebesgue measure of the Tucker format space whose CP rank is less than

In this subsection, to compare the expressive power of HT and Tucker network, we discuss the relationship between Tucker format and hierarchical Tucker tensor format firstly. Here we only consider N=2L hierarchical tensor format, its corresponding HT network (8) has been well discussed in [4].

is a linear transformation that converts a matrix into a column vector.

diag(⋅) is diagonal operator that transform a vector into a diagonal matrix. Similarly, we have,

From the property of Kronecker product: Y=AXB⇔vec(Y)=(BT⊗A)vec(X), we deduce that,

When the hierarchical tensor has L layers, we can similarly deduced the following results.

Any 2L hierarchical tensor can be represented as a 2L order Tucker tensor and vice versa.

The detailed proofs of Theorem 2 and Theorem 3 can be found in Appendix.

[18] between convolution layer and pooling layer to eliminate numerical overflow and underflow.

We choose Neurons-type fθ(x)=σ(xTw+b) with ReLU nonlinear activation σ as representation map {fθd: Rs→R}Md=1. Actually the representation mapping now is acted as a convolution layer in general CNNs. Each image patch is transformed through a representation function with parameter sharing across all the image patches. Convolution layer v(i)=U(i)Tfθ(xi),i∈[N] in Figure 3 actually can been seen as a locally connected layer in CNN. It is a specific convolution layer without parameter sharing, which means that the parameters of filter would differ when sliding across different spatial positions. In the hidden layer, without overlapping, a 3D convolution operator size of 1×1×ji is applied. Following is a product pooling layer to realize the outer product computation ∏Ni=1v(i)ji. It can be explained as a pooling layer with local connectivity property, which only connects a neuron with partial neurons in the previous layer. The output of neuron is the multiplication of entries in the neurons connected to it. The fully-connected layer simply apply the linear mapping on the output of pooling layer. The output of Tucker network would be a vector Y corresponding to class scores.

The MNIST database of handwritten digits has a training set of 60000 examples, and a test set of 10000 examples with 10 categories from 0 to 9. Each image is of

28×28 pixels. In the experiment, we select the gradient descent optimizer for back-propagation with batch size 200, and use a exponential decay learning rate with 0.2 initial learning rate, 6000 decay step and 0.1 decay rate. Figure 4

shows the training and test accuracy of three networks with 3834 number of parameters that have been learned. The parameters contains four parameters in batch normalization (mean, std, alpha, beta). We list filter size, strides size and rank as well in Table

CIFAR-10 data [20] is a more complicated data set consisting of 60000 color images size of 32×32 with 10 classes. Here, we use the gradient descent optimizer with 0.05 learning rate and 200 batch size to train. In Figure 6 we report the training and test accuracy with 23790 trained parameters. Table 2 shows the parameter details of sensitivity test, whose results are displayed in Figure 7 . From Figure 6 and Figure 7 , Tucker network still has more excellent performance when fitting a more complicated data set.

Appendix A Appendix A. Proofs

In section 3, we presented Tucker network and showed its expressive power. To prove Theorem 1, we firstly state and prove three lemmas which will be needed for the proofs.

For any (p,q) matricization of a tensor A whose CP rank is Z,

In Lemma 1, we give the lower bound of the CP-rank. If the matricization of a tensor A has matrix rank Z, then using the above lemma, we get that the CP rank of A is larger than Z.

For a N order tensor A who is in Tucker format, its matricization has the following form.

For simplicity, we denote

The 2L hierarchical tensor decomposition format is given as follows: