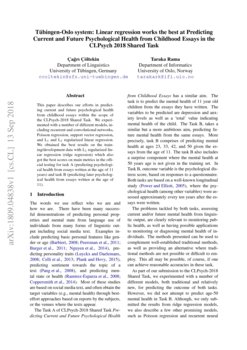 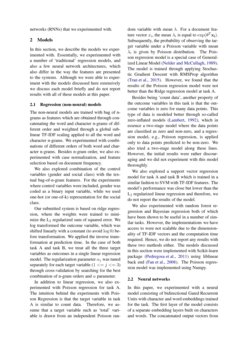 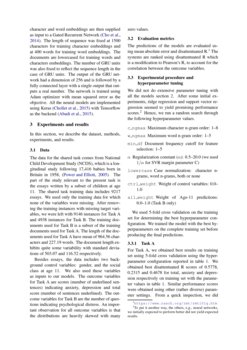 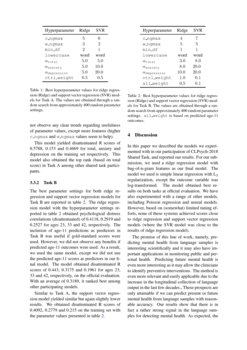 We consider the most common variants of linear regression, including Rid...
Elad Hazan, et al. ∙

In this paper we explore different regression models based on Clusterwis...
Igor Gitman, et al. ∙

The words we use reflect who we are and how we are. There have been many successful demonstrations of predicting personal properties and mental state from language use of individuals from many forms of linguistic output including social media text. Examples include predicting basic personal features like gender or age Barbieri (2008); Peersman et al. (2011); Burger et al. (2011); Nguyen et al. (2014), predicting personality traits Luyckx and Daelemans (2008); Celli et al. (2013); Plank and Hovy (2015), predicting sentiment towards the topic of a text Pang et al. (2008), and predicting mental state or health Ramirez-Esparza et al. (2008); Coppersmith et al. (2014). Most of these studies are based on social media text, and often obtain the target variables (e.g., mental health) through best-effort approaches based on reports by the subjects, or the venues where the texts appear.

has a similar aim. The task is to predict the mental health of 11 year old children from the essays they have written. The variables to be predicted are depression and anxiety levels as well as a ‘total’ value indicating mental health of the child. The Task B, takes a similar but a more ambitious aim, predicting future mental health from the same essays. More precisely, task B comprises of predicting mental health at ages 23, 33, 42, and 50 given the essays from the age of 11. The task B also includes a surprise component where the mental health at 50 years age is not given in the training set. In Task B, outcome variable is the psychological distress score, based on responses to a questionnaire. Both tasks are based on a well-known longitudinal study

Power and Elliott (2005), where the psychological health (among other variables) were assessed approximately every ten years after the essays were written.

The problems tackled by both tasks, assessing current and/or future mental health from linguistic output, are clearly relevant to monitoring public health, as well as having possible applications to monitoring or diagnosing mental health of individuals. The methods presented can be used to complement well-established traditional methods, as well as providing an alternative where traditional methods are not possible or difficult to employ. This all may be possible, of course, if one can achieve reasonable accuracies in these task.

As part of our submission to the CLPsych-2018 Shared Task, we experimented with a number of different models, both traditional and relatively new, for predicting the outcome of both tasks. However, we did not attempt to predict age-50 mental health in Task B. Although, we only submitted the results from ridge regression models, we also describe a few other promising models, such as Poisson regression and recurrent neural networks (RNNs) that we experimented with.

In this section, we describe the models we experimented with. Essentially, we experimented with a number of ‘traditional’ regression models, and also a few neural network architectures, which also differ in the way the features are presented to the systems. Although we were able to experiment with the models discussed here extensively we discuss each model briefly and do not report results with all of these models at this paper.

Our submitted system is based on ridge regression, where the weights were trained to minimize the L2 regularized sum of squared error. We log transformed the outcome variable, which was shifted linearly with a constant (to avoid log0) before transformation. We applied the inverse transformation at prediction time. In the case of both task A and task B, we treat all the three target variables as outcomes in a single linear regression model. The regularization parameter αj was tuned separately for each target variable (1<=j<=3) through cross-validation by searching for the best combination of n-gram orders and α parameter.

λ. For a document feature vector xi, the mean λi is equal to exp(θTxi)

. Subsequently, the probability of observing the target variable under a Poisson variable with mean

is given by Poisson distribution. The Poisson regression model is a special case of Generalized Linear Model

. The model is trained through applying Stochastic Gradient Descent with RMSProp algorithm

, which in essence a two-stage model where the data points are classified as zero and non-zero, and a regression model, e.g., Poisson regression, is applied only to data points predicted to be non-zero. We also tried a two-stage model along these lines. However, the initial results were rather discouraging and we did not experiment with this model thoroughly.

We also explored a support vector regression model for task A and task B which is trained in a similar fashion to SVM with TF-IDF features. The model’s performance was close but lower than the L2 regularized linear regression and therefore, we do not report the results of the model.

We also experimented with random forest regression and Bayesian regression both of which have been shown to be useful in a number of similar tasks. However, the implementations we have access to were not scalable due to the dimensionality of TF-IDF vectors and the computation time required. Hence, we do not report any results with these two methods either. The models discussed in this section were implemented with Scikit-learn package

. The length of sequence was fixed at 1500 characters for training character embeddings and at 400 words for training word embeddings. The documents are lowercased for training words and characters embeddings. The number of GRU units was also fixed to reflect the sequence length in the case of GRU units. The output of the GRU network had a dimension of 256 and is followed by a fully connected layer with a single output that outputs a real number. The network is trained using Adam optimizer with mean squared error as the objective. All the neural models are implemented using Keras

with Tensorflow as the backend

In this section, we describe the dataset, methods, experiments, and results.

The data for the shared task comes from National Child Development Study (NCDS), which is a longitudinal study following 17,416 babies born in Britain in 1958, Power and Elliott (2005)

The predictions of the models are evaluated using mean absolute error and disattentuated R.111https://www.rasch.org/rmt/rmt101g.htm The systems are ranked using disattentuated R which is a modification to Pearson’s R, to account for the correlation between the outcome variables.

We did not do extensive parameter tuning with all the models section 2. After some initial experiments, ridge regression and support vector regression seemed to yield promising performance scores.222To put it another way, the others, e.g., neural networks, we initially expected to perform better did not yield expected results.

Hence, we run a random search through the following hyperparameter values.

Case normalization: character n-grams, word n-grams, both or none

For Task A, we obtained best results on training set using 5-fold cross validation using the hyperparameter configuration reported in table 1. We obtained best disattentuated R scores of 0.5778, 0.2315 and 0.4678 for total, anxiety and depression respectively on training set with the parameter values in table 1. Similar performance scores were obtained using other (rather diverse) parameter settings. From a quick inspection, we did not observe any clear trends regarding usefulness of parameter values, except more features (higher c_ngmax and w_ngmax values seem to help).

This model yielded disattentuated R scores of 0.5788, 0.153 and 0.4669 for total, anxiety and depression on the training set respectively. This model also obtained the top rank (based on total score) in Task A among other shared task participants.

The best parameter settings for both ridge regression and support vector regression models for Task B are reported in table 2. The ridge regression model with the hyperparameter settings reported in table 2 obtained psychological distress correlations (disattentuated) of 0.4118, 0.2919 and 0.2527 for ages 23, 33 and 42, respectively. The inclusion of age-11 predictions as predictors in Task B was useful if gold-standard scores were used. However, we did not observe any benefits if predicted age-11 outcomes were used. As a result, we used the same model, except we did not use the predicted age-11 scores as predictors in our final model. The model obtained disattentuated R scores of 0.443, 0.3175 and 0.1961 for ages 23, 33 and 42, respectively, on the official evaluation. With an average of 0.3189, it ranked best among other participating models.

Similar to Task A, the support vector regression model yielded similar but again slightly lower results. We obtained disattentuated R scores of 0.4092, 0.2779 and 0.215 on the training set with the parameter values presented in table 2.

The promise of this line of work, namely, predicting mental health from language samples is interesting scientifically and it may also have important applications in monitoring public and personal health. Predicting future mental health is even more interesting as it may allow the clinicians to identify preventive interventions. The method is even more relevant and easily applicable due to the increase in the longitudinal collection of language output in the last few decades., These prospects are only attainable if we can predict present or future mental health from language samples with reasonable accuracy. Our results show that there is in fact a rather strong signal in the language samples for detecting mental health. As expected, the predictions are less reliable as time gap between the language output and the prediction is wider. However, there is small but reliable correlation between language output at age 11 and psychological health at age 42.

The correlation results of both this paper and other participants clearly show that the linguistic data contains cues that can predict current and future mental health. One of the interesting questions is whether we can get more information from this data. To this end, better modeling of the data may allow us to get more information, i.e., detect more of the signal within the text at hand. With models involving Poisson regression, zero-inflated models, and neural networks, we tried to use models that are more suitable for the data at hand. However, we obtained best results with relatively simple linear models applied to log transformed data. The success of the simple linear models over more complex (e.g., neural networks) is in line with our experiences in a diverse set of text classification tasks Çöltekin and Rama (2016); Rama and Çöltekin (2017); Çöltekin and Rama (2018). The results indicating superiority of simple linear models, however, should not be considered as conclusive since exploration of more complex models was not thoroughly performed due to time limitations.