International stakeholders increasingly invest in offsetting carbon emissions, for example, via issuing Payments for Ecosystem Services (PES) to forest conservation projects. Issuing trusted payments requires a transparent monitoring, reporting, and verification (MRV) process of the ecosystem services (e.g., carbon stored in forests). The current MRV process, however, is either too expensive (on-ground inspection of forest) or inaccurate (satellite). Recent works propose low-cost and accurate MRV via automatically determining forest carbon from drone imagery, collected by the landowners. The automation of MRV, however, opens up the possibility that landowners report untruthful drone imagery. To be robust against untruthful reporting, we propose TrueBranch, a metric learning-based algorithm that verifies the truthfulness of drone imagery from forest conservation projects. TrueBranch aims to detect untruthfully reported drone imagery by matching it with public satellite imagery. Preliminary results suggest that nominal distance metrics are not sufficient to reliably detect untruthfully reported imagery. TrueBranch leverages metric learning to create a feature embedding in which truthfully and untruthfully collected imagery is easily distinguishable by distance thresholding. 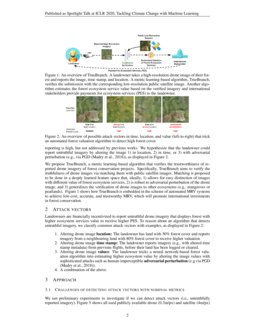 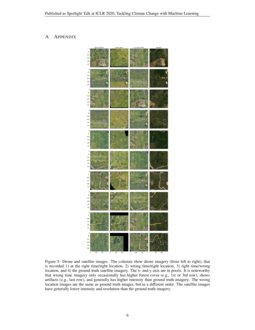 For many countries like Russia, Canada, or the USA, a robust and detaile...
Abduragim Shtanchaev, et al. ∙

Agriculture, forestry, and other land use is a key driver of climate change, accounting for 23% (12.0±2.9 GtCO2eq yr−1) of total anthropogenic emissions of greenhouse gases during 2007-2016 (IPCC_land_use_2019), largely driven by deforestation and forest degradation. Deforestation does not only release carbon (e.g., through slash-and-burn), but also destroys a multitude of other forest ecosystem services: preserving biodiversity, counteracting flooding and soil erosion, filtering water, and offering a livelihood for the local population.

The causes of deforestation are mostly economically driven: expansion of commercial or subsistence agriculture, logging, fuelwood collection, or livestock grazing (Hosonuma_2012)). To counteract the economic incentives, payments for ecosystem services (PES) (Wunder_2007) are increasingly (Donofrio_2019) provided to forest conserving or restoring landowners by international stakeholders (e.g., through the governmental UN-REDD program (Gibbs_2007) or the commercial voluntary carbon market (Donofrio_2019)). However, current methods for monitoring, reporting, and verification (MRV) of the landowner-provided forest ecosystem services are either based on 1) on-ground inspection, which is too expensive (USD 20-30k), delayed (up to two years), corruptible, and biased (GoldStandard_2017), 2) satellite, which is low-cost, but limited to the binary verification of forest/no-forest cover (Hansen_2013), or 3) drones.

. Specifically, these works propose algorithms that estimate forest ecosystem services (e.g., stored forest carbon) from drone imagery that was reported by landowners. Replacing on-ground inspection with remote assessment via drones, however, opens up the possibility of untruthfully reported imagery. Given that the landowner is financially incentivized by PES to report higher forest ecosystem services value (e.g., higher forest cover or biodiversity), the possibility of false reporting is high, but not addressed by previous works. We hypothesize that the landowner could report untruthful imagery by altering the image 1) in location, 2) in time, or 3) with adversarial perturbation (e.g., via PGD

We propose TrueBranch, a metric learning-based algorithm that verifies the trustworthiness of reported drone imagery of forest conservation projects. Specifically, TrueBranch aims to verify the truthfulness of drone images via matching them with public satellite images. Matching is proposed to be done in a deeply learned feature space that, ideally, 1) allows for easy distinction of images with different value of forest ecosystem services, 2) is robust to adversarial perturbation of the drone image, and 3) generalizes the verification of drone images to other ecosystems (e.g., mangroves or peatlands).  Figure 1 shows how TrueBranch is embedded in the scheme of automated MRV systems to achieve low-cost, accurate, and trustworthy MRV, which will promote international investments in forest conservation.

Landowners are financially incentivized to report untruthful drone imagery that displays forest with higher ecosystem services value to receive higher PES. To reason about an algorithm that detects untruthful imagery, we classify common attack vectors with examples, as displayed in

Based on our preliminary results, we design TrueBranch to leverage the triplet loss function

(Schroff_2015) from the field of metric learning. The loss function is designed to pull truthful images closer to the true satellite image and push untruthful images away from it. The result of training with triplet loss should be a deeply learned feature space (i.e., learned metric) in which truthful and untruthful imagery is separated by a large margin, as displayed in Figure 4. In comparison to the nominal metrics from section 3.1, the learned metric is also designed to be robust to adversarially perturbed images (sec. 2.3), as shown by mao2019metric

(deudon2020highresnet). Note that the metric learning-approach enables TrueBranch to be extended from the verification of imagery of forest conservation projects to a multitude of other ecosystem conservation projects (e.g., mangroves, peatlands, wetlands, etc.) by adding the respective imagery.

The authors are thankful for the guidance and advise by the mentors (Prof. Dava Newman, Forrest Meyen, Adam de Sola Pool), support from the local community (Sandro Pimentel, La Niebla Forest), academic collaborators (Prof. Pedro Brancalion, Prof. Paulo Guilherme Molin), non-governmental institutions (WWF Peru and Brazil) and CONAF (Daniel Montaner, Cesar Mattar, Jose Antonio Prado). Part of this research has been developed as part of the OpenSurface platform and a real-world pilot in Chile, which was launched at the COP25 United Nation’s Climate Summit. OpenSurface is funded by IDBLab and EIT Climate-KIC.