In this note we use e-values (a non-Bayesian version of Bayes factors) in the context of multiple hypothesis testing assuming that the base tests produce independent e-values. Our simulation studies and theoretical considerations suggest that, under this assumption, our new algorithms are superior to the known algorithms using independent p-values and to our recent algorithms using e-values that are not necessarily independent. 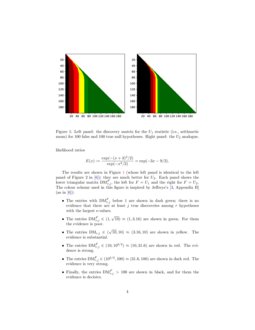 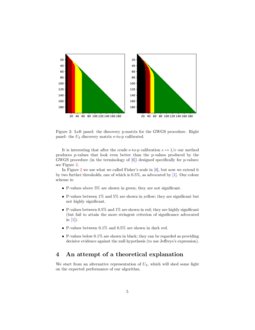 To make our exposition self-contained, we start from basic definitions (see our previous papers [4, 5, 6] exploring e-values for further information).

on a probability space

is a nonnegative extended random variable

E:Ω→[0,∞] such that ∫EdP≤1. A measurable function F:[0,∞]K→[0,∞] for an integer K≥1 is an ie-merging function if, for any probability space and any independent e-variables E1,…,EK on it, the extended random variable F(E1,…,EK) is an e-variable. We will only consider ie-merging functions that are increasing in each argument and are symmetric (do not depend on the order of their arguments).

Important examples of ie-merging functions [5] are

We will refer to them as the U-statistics (they are the standard U-statistics with product as kernel). The statistics U1 play a special role since they belong to the narrower class of e-merging functions, meaning that U1(E1,…,Ek) is an e-variable whenever E1,…,EK are e-variables (not necessarily independent).

Multiple hypothesis testing using U1 was explored in [5, 6], and in this note we will mainly concentrate on U2. It will be convenient to generalize (1) to the case n>K≥1; namely, we set

Let us fix the underlying sample space (Ω,A), which is simply a measurable space. Let P(Ω) be the set of all probability measure on the sample space. A simple hypothesis is Q∈P(Ω) and a (composite) hypothesis is H⊆P(Ω). An e-variable w.r. to a hypothesis H is an extended random variable E:Ω→[0,∞] such that ∫EdQ≤1 for all Q∈H. It is clear that any ie-merging function transforms independent e-variables w.r. to H (i.e., independent e-variables w.r. to any Q∈H) to an e-variable w.r. to H.

An e-value is a value taken by an e-variable. Let us fix K≥2, K hypotheses H1,…,HK, and independent e-variables E1,…,EK w.r. to H1,…,HK, respectively. (The e-variables are required to be independent under any Q∈H1∪⋯∪HK.) An e-test is a family EQ, Q∈P(Ω), of nonnegative extended random variables such that ∫EQdQ≤1 for all Q.

where & and ∨ stand for “and” and “or”, respectively. To emphasize that we interpret D as a matrix, we write its values as Dr,j(e1,…,eK). The intuition behind (2) is that if Dr,j(E1(ω),…,EK(ω)) is large and we reject r hypotheses Hk with K largest Ek, we can count on at least j true discoveries.

Algorithm 1 is one way of constructing a discovery matrix based on a family of ie-merging functions Fk, k∈{1,…,K}. It uses the notation f(ek:k∈R), where R⊆{1,…,K} and f is a symmetric function of |R| arguments, to mean the value of f on the sequence of ek, k∈R, arranged in any order. The algorithm is an obvious modification of Algorithm 2 in [6]; now we apply it to arbitrary ie-merging functions (such as U2) rather than just to arithmetic mean (i.e., U1). As in [6], the e-values are assumed to be ordered, without loss of generality.

The validity of Algorithm 1 can be demonstrated by the argument in the proof of Theorem 2.1 in [6]. It is clear that, in the case of U2, the assumption of independence of E1,…,En can be relaxed to the assumption that all covariances cov(Ei,Ej), i≠j, are nonpositive.

The discovery matrix constructed in Algorithm 1 does not depend on the probability spaces (Ω,A,Q), hypotheses H1,…,HK⊆P(Ω), or e-variables E1,…,EK, and in this sense is universal (in the terminology of [6, Section 5]).

In this section we run Algorithm 1 applied to U1 and U2. Slightly generalizing the explanation in [6, Appendix B in Working Paper 27], we can see that the Un discovery matrix can be computed in time O(K3+n). For n=1, the time can be improved from O(K4) to O(K2) [6, Appendix B in Working Paper 27]. For n=2, we can easily improve the time O(K5) to O(K4) by noticing that

This is sufficient to cope with the case K=200 that we usually use in our simulation studies.

: the null hypothesis is

The results are shown in Figure 1 (whose left panel is identical to the left panel of Figure 2 in [6]); they are much better for U2. Each panel shows the lower triangular matrix DMFr,j, the left for F=U1 and the right for F=U2. The colour scheme used in this figure is inspired by Jeffreys’s [3, Appendix B] (as in [6]):

It is interesting that after the crude e-to-p calibration e↦1/e our method produces p-values that look even better than the p-values produced by the GWGS procedure (in the terminology of [6]) designed specifically for p-values: see Figure 2.

In Figure 2 we use what we called Fisher’s scale in [6], but now we extend it by two further thresholds, one of which is 0.5%, as advocated by [1]. Our colour scheme is:

4 An attempt of a theoretical explanation

We start from an alternative representation of U2, which will shed some light on the expected performance of our algorithm.

be the sample variance of

For some e≠0 the equality holds as equality.

Using the notion of relative variance, we can rewrite (3) as

We can see the method of this paper based on U2 has a potential for improving on the method of [6], but the best it can achieve is squaring the entries of the discovery matrix. An entry is squared if the multiset of e-values on which the infimum in the algorithm of [6] is attained consists of a single value. Otherwise we suffer as the e-values become more diverse.

The most natural direction of further research is to find computationally efficient procedures for computing discovery matrices based on Un, n>1.

We are grateful to Yuri Gurevich for useful discussions. In our simulation studies we used Python and R, including the package hommel [2].

V. Vovk’s research has been partially supported by Astra Zeneca and Stena Line. R. Wang is supported by the Natural Sciences and Engineering Research Council of Canada (RGPIN-2018-03823, RGPAS-2018-522590).