True and false discoveries with e-values

We discuss controlling the number of false discoveries using e-values instead of p-values. Using e-values simplifies the known algorithms radically. 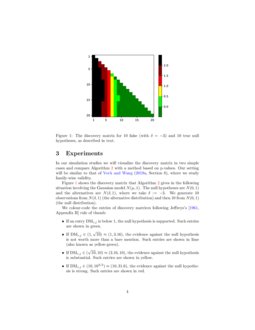 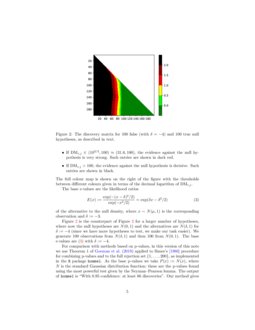 In this note we define an analogue for e-values of a known procedure of controlling the numbers of false discoveries (Goeman et al., 2019). Of course, we base it on arithmetic averaging of e-values as merging function. We will freely use the definitions given in Vovk and Wang (2019a).

In Section 2 we describe our procedures, and in Section 3 report results of simple simulation studies.

Suppose we are given K e-values e1,…,eK for testing hypotheses H1,…,HK on a measurable space Ω. Without loss of generality we assume that the e-values are sorted in the ascending order, e1≤⋯≤eK.

Following Goeman and Solari (2011), we first fix a rejection set R⊆{1,…,K} (the set of base hypotheses, represented by their indices, that the researcher chooses to reject). The discovery curve for R is defined as

(notice that I=∅ is excluded for any j).

The main mathematical result of this note (the very simple Theorem 2.1 below) says that the discovery curve satisfies the following natural property of validity. Let us say that a function D:{1,…,|R|}×Ω→[0,∞) controls true discoveries if there exists a conditional e-variable E=(EQ)Q∈P(Ω) such that

The disjunction in (1) is of the kind discussed by Fisher ([1973], Section III.1): assuming D(j,ω) is large for some j, either there are at least j true discoveries (rejections of false null hypotheses) or a rare chance has occurred (namely, the observed e-value is at least D(j,ω)).

and we can see that ∣∣R∖IQ∣∣≥j. We have at least j true discoveries, which establishes the disjunction.

It is clear that DCR is the largest function whose control of true discoveries is witnessed by the arithmetic mean (2) for all measurable spaces Ω, all hypotheses Hk, and all rejection sets R. ∎

A polynomial-time algorithm for computing DCR is given as Algorithm 1. It uses the notation

where e:=(e1,…,eK) (as we said earlier, arithmetic averaging is essentially the only symmetric e-merging function (Vovk and Wang, 2019a)).

Next we will discuss a less flexible method in which we consider a family of rejection sets R that are chosen in an optimal way, in some sense. For each r∈{1,…,K}, the set Rr:={K−r+1,…,K} is the optimal rejection set of size r, meaning that, for any other set R⊆{1,…,K} of size r, we have DCRr≥DCR. In the terminology of statistical decision theory (Wald, 1950, Section 1.3), Rr is the minimal complete class of rejection sets.

The output of Algorithm 2 is a matrix DMr,j, where r∈{1,…,K} and j∈{1,…,r}. We regard DM as a K×K matrix whose elements above the main diagonal are undefined and refer to it as the discovery matrix. It is defined as

where Rr:={K−r+1,…,K} is the optimal rejection set of size r. Possible uses of such a matrix will be discussed at the end of the next section.

In our simulation studies we will visualize the discovery matrix in two simple cases and compare Algorithm 2 with a method based on p-values. Our setting will be similar to that of Vovk and Wang (2019a, Section 8), where we study family-wise validity.

Figure 1 shows the discovery matrix that Algorithm 2 gives in the following situation involving the Gaussian model N(μ,1). The null hypotheses are N(0,1) and the alternatives are N(δ,1), where we take δ:=−3. We generate 10 observations from N(δ,1) (the alternative distribution) and then 10 from N(0,1) (the null distribution).

We colour-code the entries of discovery matrices following Jeffreys’s [1961, Appendix B] rule of thumb:

The full colour map is shown on the right of the figure with the thresholds between different colours given in terms of the decimal logarithm of DMr,j.

The base e-values are the likelihood ratios

of the alternative to the null density, where x∼N(μ,1) is the corresponding observation and δ:=−3.

For comparison with methods based on p-values, in this version of this note we use Theorem 1 of Goeman et al. (2019) applied to Simes’s [1986] procedure for combining p-values and to the full rejection set {1,…,200}, as implemented in the R package hommel. As the base p-values we take P(x):=N(x), where N

is the standard Gaussian distribution function; these are the p-values found using the most powerful test given by the Neyman–Pearson lemma. The output of

corresponding to the significance level 1−0.95=0.05 (despite the bound not being a bona fide e-value).

It is interesting that our method does not require the assumption of independence of e-values (whereas independence, in some form, is essential for Simes’s method, and not assuming Simes’s inequality in hommel leads to only 72 discoveries instead of 86).

In practice, a discovery matrix, such as that shown in Figure 2, can be used in different ways, for example:

Of course, the researcher may know her hypotheses and relations between them very well, and after looking at the discovery matrix she may come up with her own rejection set R, as emphasized by Goeman and Solari (2011). In this case she should use Algorithm 1.

In Section 3 we used the R package hommel written by Jelle Goeman, Rosa Meijer, and Thijmen Krebs; it is available on CRAN. For our simulation studies we used Python, and our Jupyter notebook is available on arXiv.

V. Vovk’s research has been partially supported by Astra Zeneca and Stena Line. R. Wang is supported by the Natural Sciences and Engineering Research Council of Canada (RGPIN-2018-03823, RGPAS-2018-522590).