Weighted Finite State Transducers (WFSTs) are versatile data structures that can model a great number of problems, ranging from Automatic Speech Recognition to DNA sequencing. Traditional computer science algorithms are employed when working with these structures in order to optimise their size, but also the runtime of decoding algorithms. However, these algorithms are not unified under a common framework that would allow for their treatment as a whole. Moreover, the inherent geometrical representation of WFSTs, coupled with the topology-preserving algorithms that operate on them make the structures ideal for tropical analysis. The benefits of such analysis have a twofold nature; first, matrix operations offer a connection to nonlinear vector space and spectral theory, and, second, tropical algebra offers a connection to tropical geometry. In this work we model some of the most frequently used algorithms in WFSTs by using tropical algebra; this provides a theoretical unification and allows us to also analyse aspects of their tropical geometry. Further, we provide insights via numerical examples. 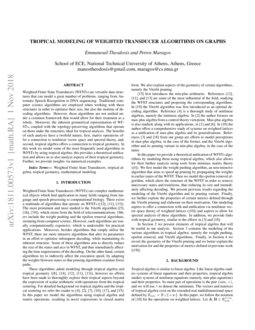 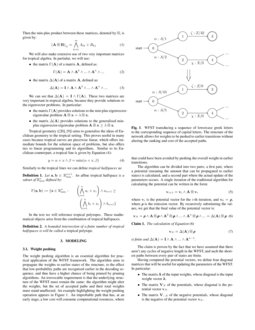 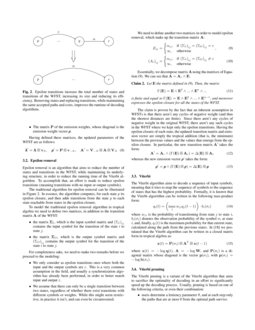 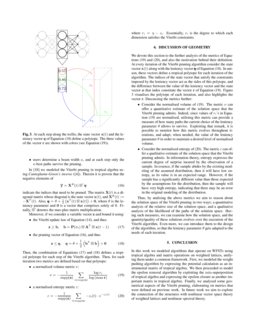 Clustering dynamics on graphs: from spectral clustering to mean shift through Fokker-Planck interpolation

In this work we build a unifying framework to interpolate between densit...
Katy Craig, et al. ∙

Weighted Finite State Transducers (WFSTs) are complex mathematical objects which find application in many fields ranging from language and speech processing to computational biology. There exists a multitude of algorithms that operate on WFSTs ([Mohr00], [Mohr09], [MPR02]). The most prominent and most studied is the Viterbi algorithm ([Forn73], [Rabi89], [Vite67]), which stems from the field of telecommunications. Others include the weight pushing and the epsilon removal algorithms, stemning from computer science. However, such algorithms are usually computationally expensive, which is undesirable for practical applications. Moreover, besides algorithms that simply utilise the WFST, there are more intrusive algorithms that alter its parameters in an effort to optimise subsequent decoding, while maintaining its inherent structure. Some of these algorithms aim to directly reduce the size of the states and arcs in WFST, and thus immediately affecting the time requirements of the decoding. On the other hand, certain algorithms try to indirectly affect the execution speed, by adapting the weights between states so that pruning algorithms examine fewer paths.

[Pin98] first introduces the min-plus arithmetic. References [Mohr00], [Mohr09], and [MPR02] are some of the most influential of the field, studying the WFST structures and proposing the corresponding algorithms. In [Vite67] the Viterbi algorithm was first introduced as an optimal decoding algorithm. Reference [Cuni79] is a thorough study of nonlinear algebras, namely the minimax algebra. In [Butk10] the author focuses on max-plus algebra from a control theory viewpoint. Max-plus algebra is also studied, along with its applications, in [BCOQ93] and [Gaub97]. In [Mara17] the author offers a comprehensive study of systems on weighted lattices as a unification of max-plus algebra and its generalisations. References [ChMa17] and [ThMa18]

In this paper we provide a theoretical unification of WFSTs algorithms by modeling them using tropical algebra, which also allows for their further analysis using tools from minimax matrix theory ([Cuni79]). We first model the weight pushing algorithm, an non-intrusive algorithm that aims to speed up pruning by propagating the weights to earlier states of the WFST. Then we model the epsilon removal algorithm, which alters the structure of the WFST in order to remove unecessary states and trastitions, thus reducing its size and immediately affecting decoding. We present previous results regarding the modeling of the Viterbi algorithm and its pruning variant. Finally, we further explore the properties of certain metrics defined through the Viterbi pruning and elaborate on their motivation. Our modeling aspires to offer a connection with and unification via nonlinear vector space theory of weighted lattices ([Mara17]) and aspires to allow for spectral analysis of these algorithms. In addition, we provide links with tropical geometry, similar to the efforts in [ChMa17] and [ThMa18].

In Section 2 we present elements of tropical algebra that will be useful in our analysis. Section 3 contains the modeling of tha various algorithms in tropical algebra; namely the weight pushing, epsilon removal, and Viterbi algorithms. Finally, in Section 4 we revisit the geometry of the Viterbi pruning and we better explain the motivation for and the properties of metrics defined in previous work ([ThMa18]).

Tropical algebra is similar to linear algebra. Like linear algebra studies systems of linear equations and their properties, tropical algebra studies systems of nonlinear equations (namely, min-plus equations) and their properties. Its main pair of operations is the pair (min,+), and we will use ∧ to denote the minimum. The vectors and matrices of tropical algebra exist on the extended real multidimensional space defined by Rmin=R∪{+∞}. In this paper, we follow the notation of [Mara17] for the operations on weighted lattices. Let A,B∈Rn×mmin. Then the min-plus product between these matrices, denoted by ⊞, is given by:

We will also make extensive use of two very important matrices for tropical algebra. In partiular, we will use:

. These two matrices are very important in tropical algebra, because they provide solutions to the eigenvector problems. In particular:

) aims to generalise the ideas of Euclidean geometry to the tropical setting. This proves useful in many cases because tropical curves are piecewise linear, which offers immediate bounds for the solution space of problems, but also offers ties to linear programming and its algorithms. Similar to its Euclidean counterpart, a tropical line is given by Equation (

Similarly to the tropical lines we can define tropical halfspaces as:

Let a,b∈Rn+1min. An affine tropical halfspace is a subset of Rnmin defined by:

In the text we will reference tropical polytopes. These mathematical objects arise from the combination of tropical halfspaces:

A bounded intersection of a finite number of tropical halfspaces is will be called a tropical polytope.

The weight pushing algorithm is an essential algorithm for practical application of the WFST framework. The algorithm aims to propagate the weights to earlier states of the structure, to the effect that low-probability paths are recognised earlier in the decoding sequence, and thus have a higher chance of being pruned by pruning algorithms. An irrevocable requirement is that the underlying structure of the WFST must remain the same: the algorithm might alter the weights, but the set of accepted paths and their total weights must stand unaffected. An example highlighting the weight pushing operation appears in Figure

1. An improbable path that has, at an early stage, a low cost will consume computational resources, where that could have been avoided by pushing the overall weight in earlier transitions.

The algorithm can be divided into two parts; a first part, where a potential (meaning the amount that can be propagated to earlier states) is calculated, and a second part where the actual update of the parameters occurs. A single iteration of the traditional algorithm for calculating the potential can be written in the form:

The calculation of Equation (6)

The claim is proven by the fact that we have assumed that there aren’t any cycles of negative length in the WFST, and such the shortest paths between every pair of states are finite.

Having computed the potential vectors, we define four diagonal matrices that will be useful for updating the parameters of the WFST. In particular:

Having defined these matrices, the updated parameters of the WFST are as follows:

Epsilon removal is an algorithm that aims to reduce the number of states and transitions in the WFST, while maintaining its underlying structure, in order to reduce the running time of the Viterbi algorithm. To accomplish that, an effort is made to reduce epsilon transitions (meaning transtitions with no input or output symbols).

The traditional algorithm for epsilon removal can be illustrated in Figure 2. In essence, the algorithm computes, for each state p its epsilon closure, and then adds transitions from the state p to each state reachable from states in the epsilon closure.

To model the traditional epsilon removal algorithm in tropical algebra we need to define two matrices, in addition to the transition matrix A of the WFST:

For completeness sake, we need to make two remarks before we proceed to the modeling:

We need to define another two matrices in order to model epsilon removal, which make up the transition matrix A:

Essentially, we decompose matrix A using tha matrices of Equation (9). We can see that A=Aε∧E.

Let E the matrix defined in (9). Then, the matrix

is finite and equal to Γ(E)=E∧E2∧...∧En−1, and moreover expresses the epsilon closure for all the states of the WFST.

whereas the new emission vector ρ′ takes the form:

where wji is the probability of transitioning from state j to state i, bi(σt) denotes the observation probability of the symbol σt at state i, and, finally, qi(t) is the maximum probability for that current state, calculated along the path from the previous states. In [ThMa18] we postulated that the Viterbi algorithm can be written in a closed matrix form in tropical algebra as:

The Viterbi pruning is a variant of the Viterbi algorithm that aims to sacrifice the optimality of decoding in an effort to significantly speed up the decoding process. Usually, pruning is based on one of the following criteria, or even their combination:

In [ThMa18] we modeled the Viterbi pruning in tropical algebra using Cuninghame-Green’s inverse ([Cuni79]). Therein it is proven that the negative elements of

indicate the indices that need to be pruned. The matrix X(t) is a diagonal matrix whose diagonal is the state vector x(t), and X#(t):=−XT(t). Also, η=θ+12(xT(t)⊞x(t))+0, where θ is the leniency parameter and 0 is a vector that comprises solely of 0. Finally, ⊞′ denotes the max-plus matrix multiplication.

Moreover, if we consider a variable vector z and bound it using:

Then, the combination of Equations (17) and (18) defines a tropical polytope for each step of the Viterbi algorithm. Then, for each iteration two metrics are defined based on that polytope:

where ri=η−zi. Essentially, ri is the degree to which each dimension satisfies the Viterbi constraints.

In this work we modeled algorithms that operate on WFSTs using tropical algebra and matrix operations on weighted lattices, unifying them under a common framework. First, we modeled the weight pushing algorithm by expressing the potential calculation as an instrumental matrix of tropical algebra. We then proceeded to model the epsilon removal algorithm by exploiting the min-superposition of tropical algebra and expressing the epsilon closure as another important matrix in tropical algebra. Finally, we analysed some geometrical aspects of the Viterbi pruning, elaborating on metrics that were defined on previous work. In future work we aim to explore the connection of the structures with nonlinear vector space theory of weighted lattices and nonlinear spectral theory.