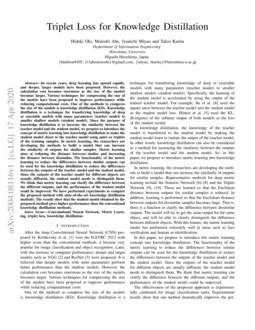 In Teacher We Trust: Learning Compressed Models for Pedestrian Detection

After the deep Convolutional Neural Network (CNN) proposed by Krizhevsky et al. [1] won the ILSVRC 2012 with higher score than the conventional methods, it became very popular for image classification and object recognition. Later, with the increase in computer performance, deeper and larger models such as VGG [2] and ResNet [3] were proposed. It is believed that deeper models with more parameters perform better performance than the shallow models. However, the calculation cost becomes enormous as the size of the models becomes larger. Various techniques for compressing the size of the models have been proposed to improve performance while reducing computational costs.

In metric learning, the researchers are developing the methods to build a model that can increase the similarity of outputs for similar samples. Representative methods for deep metric learning include the Siamese Network [6, 7, 8] and the Triplet Network [9], [10]. These are learned so that the Euclidean distance between outputs for similar samples is reduced. In addition, learning is performed so that the Euclidean distance between outputs for dissimilar samples becomes large. That is, there is a function to clarify the difference between dissimilar outputs. The model will try to get the same output for the same object, and will be able to clearly distinguish the difference between different objects. With this feature, the metric learning model has performed extremely well in areas such as face verification and human re-identification.

The effectiveness of the proposed approach is experimentally confirmed for image classification tasks. Experimental results show that our method dramatically improves the performance of the student model. Also, we have performed experiments to compare the proposed method with state-of-the-art knowledge distillation methods. The results show that the student model obtained by the proposed method gives higher performance than the conventional knowledge distillation methods.

The deep CNN has been proven to be effective and has been applied many applications such as for image classification[1, 3], object detection[11], image segmentation[12] and so on.

is the weight of the neuron indexed as

. The activation function of each neuron is denoted as

A typical model for deep learning embedding is the Siamese Neural Network [6, 7, 8]

. The Siamese Network consists of two identical networks joined at their outputs. The two networks extract feature vectors from two different samples. Usually, the weights of the two networks are shared. The objective function of the optimization for training the parameters of the networks is defined by using these extracted feature vectors as

where Dij represents the distance between the pair of the outputs f(xi) and f(xj) of each network for the sample pair xi and xj. The distance Dij is defined by

Triplet Network is designed to learn embedding from a triplet of samples called ”anchor”, ”positive” and ”negative”. The triplet network learns embedding such that the distance between ”anchor” xa and ”positve” xp is smaller than the distance between ”anchor” xa and ”negative” xn. Various losses have been proposed for the Triplet Network. The triplet loss

is generally used, where f(⋅) denotes the output of the model, and m is a parameter indicating the distance between clusters. Θ is an index set of ”anchor”, ”positive”, and ”negative”. The triplet network learns so that the anchor-positive distance is relatively closer than the anchor-negative distance. Therefore, multiple similar concepts can be considered without depending on one similar concept. Triplet Network can overcome the drawbacks of Siamese Network.

In recent years, various approaches have been proposed for knowledge distillation. Park et al. [13] expressed the relationship between the outputs of the teacher model as the Euclidean distance between the two outputs, and transferred it to the student model (RKD-D). They expressed the similarity between the pair of the outputs t(xi) and t(xj) as

where χ3 is a set of triplet samples randomly generated from the samples in the mini-batch.

They also argued that using both angles and Euclidean distance for knowledge transfer would further improve the performance of the student model (RKD-DA). The loss for this case is defined as

The pair-wise or triplet-wise similarity between the output of the teacher model to the output of the student model is considered in RKD-D, RKD-A, or RKD-DA while the point-wise transfer was performed in the knowledge distillation methods such as Ba’s KD [4] or Hinton’s KD [5]. Thus the knowledge distillation methods such as RKD-D, RKD-A, or RKD-DA succeeded in achieving top performance.

The loss using the output distribution of the teacher model (soft target) can be used alone or combined with the loss using the label of the original training data (hard target). The combined loss can be defined as

We define the triplet loss for knowledge transfer as

We experimentally investigated the effectiveness of the proposed method with the image classification task. CIFAR-10 [15]

An activation function ReLU defined by

In the training, the optimization is done by using the stochastic gradient descent (SGD) with momentum. The learning rate of SGD is initially set at 0.01 and changed by multiplying 0.1 at every 100 epochs. The momentum parameter is set to 0.9. We also introduced weight decay to prevent over-learning. We set hard target loss as cross entropy with softmax and combined it with soft target loss. In addition, we introduced a parameter

λ as shown in Equation (16) to maintain the balance between hard target loss and soft target loss. We set λBKD=2, λHKD=16, λRKD−D=10, λRKD−A=20 and λoursKD=2. The temperature parameter of Hinton’s KD [5] was set to 4, and the hyper-parameter m of triplet loss was set to 5.

The Table II shows the classification accuracy of the student model for test samples in each method. From the table, it can be seen that in the case of CIFAR10, the proposed method achieves higher performance than the other methods.

The weights in the convolution layers were pre-trained by using ImageNet, and they were used as the initial weights of the training. Similarly, the SGD with momentum was used for the optimization. The learning rate of SGD with momentum is initially set at 0.001 and multiplied by 0.9 every 3 epochs. The momentum parameter is set to 0.9. We also used mixup [17] to prevent over-learning. Cross-entropy with softmax was used as the hard target loss and was combined with the soft target loss. Also, we introduced a parameter λ as shown in Equation (16) to maintain the balance between hard target loss and soft target loss. We set λBKD=2, λHKD=16, λRKD−D=25, λRKD−A=50 and λoursKD=2. The temperature parameter of Hinton’s KD [5] was set to 4, and the parameter m of triplet loss was set to 5.

Table III shows the classification accuracy of the student model for the Tiny ImageNet dataset in each method. The results show that the proposed method gives slightly better performance than the other methods.

Iv-C Experiments on the combined loss

Park et al. [13] succeeded in achieving even higher performance by combining their method (RKD-DA) with Hinton’s method [5]. Here we investigate the effectiveness of the combination of different loss functions. The loss of each method is combined with Hinton’s loss as

. Depending on the datasets CIFAR-10 and Tiny ImageNet, the same network architectures with the previous subsections were used. The student models were trained, and the classification performances of the trained student models are calculated.

Also we consider a combination with Park’s KD [13]. We investigate the effects of combining RKD-DA loss with our loss and we investigate combinations with both Hinton’s KD [5] and RKD-DA. Depending on the datasets CIFAR-10 and Tiny ImageNet, the same network architectures with the previous subsections were used.

On the other hand, the concept of metric learning, such as Triplet loss, has a problem with hard sampling. In hard sampling, we intentionally select samples that are difficult to learn to get consistent training results. If you use only samples that are easy to learn, the performance of learning decreases. In the proposed approach, it is necessary to use hard sampling because the proposed method is based on the Triplet loss. Thus we have to introduce a way to address this problem, like Hermans et al. [18].