Convolutional neural networks (CNNs) have achieved a great success in face recognition, which unfortunately comes at the cost of massive computation and storage consumption. Many compact face recognition networks are thus proposed to resolve this problem. Triplet loss is effective to further improve the performance of those compact models. However, it normally employs a fixed margin to all the samples, which neglects the informative similarity structures between different identities. In this paper, we propose an enhanced version of triplet loss, named triplet distillation, which exploits the capability of a teacher model to transfer the similarity information to a small model by adaptively varying the margin between positive and negative pairs. Experiments on LFW, AgeDB, and CPLFW datasets show the merits of our method compared to the original triplet loss. 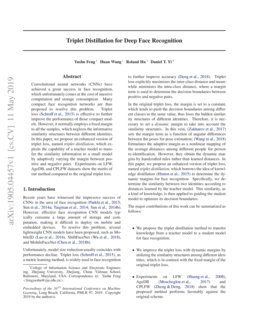 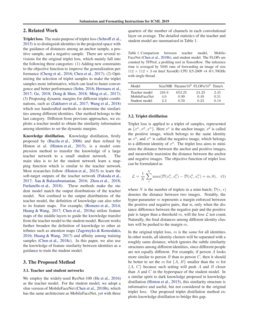 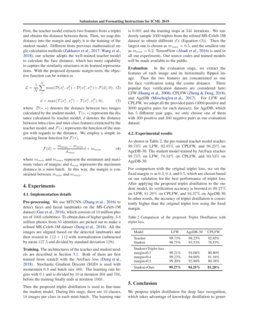 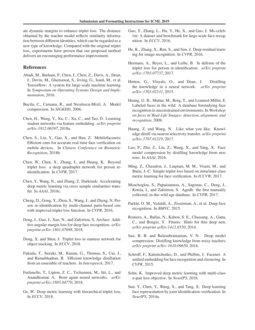 We propose a simple modification from a fixed margin triplet loss to an ...
Mai Lan Ha, et al. ∙

How to Train Triplet Networks with 100K Identities?

In the original triplet loss, the margin is set to a constant, which tends to push the decision boundaries among different classes to the same value, thus loses the hidden similarity structures of different identities. Therefore, it is necessary to set a dynamic margin to take into account the similarity structures. In this vein, (Zakharov et al., 2017)

sets the margin term as a function of angular differences between the poses for pose estimation;

(Wang et al., 2018) formulates the adaptive margin as a nonlinear mapping of the average distances among different people for person re-identification. However, they obtain the dynamic margins by handcrafted rules rather than learned distances. In this paper, we propose an enhanced version of triplet loss, named triplet distillation, which borrows the idea of knowledge distillation (Hinton et al., 2015) to determine the dynamic margins for face recognition. Specifically, we determine the similarity between two identities according to distances learned by the teacher model. This similarity, as a kind of knowledge, is then applied to guiding the student model to optimize its decision boundaries.

The major contributions of this work can be summarized as follows:

Triplet loss. The main purpose of triplet loss (Schroff et al., 2015) is to distinguish identities in the projected space with the guidance of distances among an anchor sample, a positive sample, and a negative sample. There are several revisions for the original triplet loss, which mainly fall into the following three categories: (1) Adding new constraints to the objective function to improve the generalization performance (Cheng et al., 2016; Chen et al., 2017); (2) Optimizing the selection of triplet samples to make the triplet samples more informative, which can lead to faster convergence and better performance (Sohn, 2016; Hermans et al., 2017; Ge, 2018; Dong & Shen, 2018; Ming et al., 2017); (3) Proposing dynamic margins for different triplet combinations, such as (Zakharov et al., 2017; Wang et al., 2018) which use handcrafted methods to determine the similarities among different identities. Our method belongs to the last category. Different from previous approaches, we exploits a teacher model to obtain the similarity information among identities to set the dynamic margins.

to learn the soft-target outputs of the teacher network

We employ the widely-used ResNet-100 (He et al., 2016) as the teacher model. For the student model, we adopt a slim version of MobileFaceNet (Chen et al., 2018b), which has the same architecture as MobileFaceNet, yet with three quarters of the number of channels in each convolutional layer on average. The detailed statistics of the teacher and student model are summarized in Table 1.

Triplet loss is applied to a triplet of samples, represented as {xa,xp,xn}. Here xa is the anchor image; xp is called the positive image, which belongs to the same identity as xa, and xn is called the negative image, which belongs to a different identity of xa. The triplet loss aims to minimize the distance between the anchor and positive images, and meanwhile maximize the distance between the anchor and negative images. The objective function of triplet loss can be formulated as

where N is the number of triplets in a mini-batch; D(∗,∗) denotes the distance between two images. Notably, the hyper-parameter m represents a margin enforced between the positive and negative pairs, that is, only when the distance difference between the negative pair and the positive pair is larger than a threshold m, will the loss L not count. Naturally, the final distances among different identity clusters will be pushed to the margin m.

In the original triplet loss, m is the same for all identities. In other words, all identity clusters will be separated with a roughly same distance, which ignores the subtle similarity structures among different identities, since different people are not equally different. For example, if person A looks more similar to person B than to person C, then it should be better to set the m for {A, B} smaller than the m for {A, C} because such setting will push A and B closer than A and C in the hyperspace of the student model. In a similar spirit to dark knowledge proposed in knowledge distillation (Hinton et al., 2015), this similarity structure is informative and useful, but not considered in the original triplet loss. Our proposed triplet distillation method exploits knowledge distillation to bridge this gap.

First, the teacher model extracts two features from a triplet and obtains the distance between them. Then, we map this distance into the margin and apply it to the training of the student model. Different from previous mathematical angle calculation methods (Zakharov et al., 2017; Wang et al., 2018), our scheme adopts the well-trained teacher model to calculate the face distance, which has more capability to capture the similarity structures in its learned representations. With the proposed dynamic margin term, the objective function can be written as

denotes the distance between intra-class and inter-class features extracted by the teacher model, and

F(∗) represents the function of the margin with regards to the distance. We employ a simple increasing linear function for F(∗),

where mmin and mmax represent the minimum and maximum values of margin; and dmax represents the maximum distance in a mini-batch. In this way, the margin is constrained between mmin and mmax.

Pre-processing. We use MTCNN (Zhang et al., 2016) to detect faces and facial landmarks on the MS-Celeb-1M dataset (Guo et al., 2016), which consists of 10 million photos of 100k celebrities. To obtain data of higher quality, 3.8 million photos from 85 identities are picked out to make a refined MS-Celeb-1M dataset (Deng et al., 2018). All the images are aligned based on the detected landmarks and then resized to 112×112 with normalization (subtracted by mean 127.5

and divided by standard deviation

Training. The architectures of the teacher and student models are described in Section 3.1. Both of them are first trained from scratch with the ArcFace loss (Deng et al., 2018)

Then the proposed triplet distillation is used to fine-tune the student model. During this stage, there are 10 classes, 18 images per class in each mini-batch. The learning rate is 0.001 and the training stops at 34k iterations. We randomly sample 1000 triplets from the refined MS-Celeb-1M dataset to obtain different d’s (Equation (3)). Then the largest one is chosen as mmax=0.5, and the smallest one as mmin=0.2. TensorFlow (Abadi et al., 2016) is used in all our experiments. Our source codes and trained models will be made available to the public.

Evaluation. In the evaluation stage, we extract the features of each image and its horizontally flipped image. Then the two features are concatenated as one for face verification using the cosine distance. Three popular face verification datasets are considered here: LFW (Huang et al., 2008), CPLFW (Zheng & Deng, 2018), and AgeDB (Moschoglou et al., 2017). For LFW and CPLFW, we adopt all the provided pairs (3000 positive and 3000 negative pairs for each dataset); for AgeDB, which has 5 different year gaps, we only choose one of them with 300 positive and 300 negative pairs as our evaluation dataset.

For comparison with the original triplet loss, we set the fixed margin m as 0.3, 0.4, and 0.5, which are chosen based on our validation for the best performance of triplet loss. After applying the proposed triplet distillation to the student model, its verification accuracy is boosted to 99.27% on LFW, 81.28% on CPLFW, and 94.37% on AgeDB-30. In other words, the accuracy of triplet distillation is consistently higher than the original triplet loss using the fixed margin.

We propose triplet distillation for deep face recognition, which takes advantage of knowledge distillation to generate dynamic margins to enhance triplet loss. The distance obtained by the teacher model reflects similarity information between different identities, which can be regarded as a new type of knowledge. Compared with the original triplet loss, experiments have proven that our proposed method delivers an encouraging performance improvement.