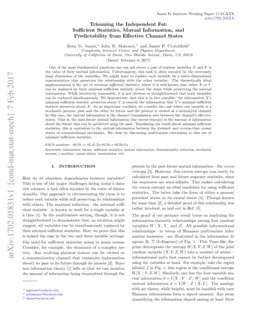 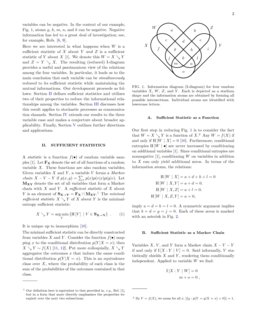 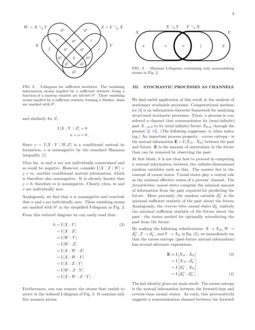 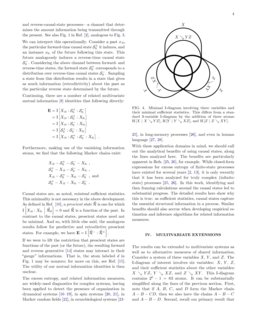 How do we elucidate dependencies between variables? This is one of the major challenges facing today’s data-rich sciences, a task often stymied by the curse of dimensionality. One approach to circumventing the curse is to reduce each variable while still preserving its relationships with others. The maximal reduction—the minimal sufficient statistic—is known to work for a single variable at a time

[1]. In the multivariate setting, though, it is not straightforward to demonstrate that, as intuition might suggest, all variables can be simultaneously replaced by their minimal sufficient statistics. Here, we prove that this is indeed the case in the two and three variable settings.

The need for sufficient statistics arises in many arenas. Consider, for example, the dynamics of a complex system. Any evolving physical system can be viewed as a communication channel that transmits (information about) its past to its future through its present [2]. Shannon information theory [1] tells us that we can monitor the amount of information being transmitted through the present by the past-future mutual information—the excess entropy [3]. However, this excess entropy can rarely be calculated from past and future sequence statistics, since the sequences are semi-infinite. This makes calculating the excess entropy an ideal candidate for using sufficient statistics. The latter take the form of either a process’ prescient states or its causal states [4]. Though known for some time [2], a detailed proof of this relationship was rather involved, as laid out in Ref. [5].

The proof of our primary result turns on analyzing the information-theoretic relationships among four random variables W, X, Y, and Z. All possible informational relationships—in terms of Shannon multivariate information measures—are illustrated in the information diagram [6, 7] (I-diagram) of Fig. 1. This Venn-like diagram decomposes the entropy \HX,Y,Z,W of the joint random variable (X,Y,Z,W) into a number of atoms—informational units that cannot be further decomposed using the variables at hand. For example, take the region labeled f in Fig. 1; this region is the conditional entropy \HX∣Y,Z,W. Similarly, one has the four-variable mutual information k=\IX:Y:Z:W and the condition mutual information d=\IW:Z∣X,Y. The analogy with set theory, while helpful, must be handled with care: Shannon informations form a signed measure. Any atom quantifying the information shared among at least three variables can be negative. In the context of our example, Fig. 1, atoms g, h, m, n, and k can be negative. Negative information has led to a great deal of investigation; see, for example, Refs. [8, 9].

Here we are interested in what happens when W is a sufficient statistic of X about Y and Z is a sufficient statistic of Y about X [1]. We denote this W=X\mssY and Z=Y\mssX. The resulting (reduced) I-diagram provides a useful and parsimonious view of the relations among the four variables. In particular, it leads us to the main conclusion that each variable can be simultaneously reduced to its sufficient statistic while maintaining the mutual informations. Our development proceeds as follows: Section II defines sufficient statistics and utilizes two of their properties to reduce the informational relationships among the variables. Section III discusses how this result applies to stochastic processes as communication channels. Section IV extends our results to the three variable case and makes a conjecture about broader applicability. Finally, Section V outlines further directions and applications.

ii.1 Sufficient Statistic as a Function

Our first step in reducing Fig. 1 is to consider the fact that W=X\mssY is a function of X.222By Y=f(X), we mean for all x, |{y:p(Y=y|X=x)>0}|=1. Any W=f(X) if and only if \HW∣X=0 [10]. Furthermore, conditional entropies \HW∣∙ are never increased by conditioning on additional variables [1]. Since conditional entropies are nonnegative [1], conditioning W on variables in addition to X can only yield additional zeros. In terms of the information atoms, the relations:

imply a=d=h=l=0. A symmetric argument implies that b=d=g=j=0. Each of these zeros is marked with an asterisk in Fig. 2.

Variables X, V, and Y form a Markov chain X−V−Y if and only if \IX:Y∣V=0. Said informally, V statistically shields X and Y, rendering them conditionally independent. Applied to variable W we find:

and similarly for Z,

Since o=\IX:Y∣W,Z is a conditional mutual information, o is nonnegative by the standard Shannon inequality [1].

Thus far, m and n are not individually constrained and so could be negative. However, consider \IX:Z∣W=j+m, another conditional mutual information, which is therefore also nonnegative. It is already known that j=0, therefore m is nonnegative. Clearly, then, m and o are individually zero.

Analogously, we find that n is nonnegative and conclude that n and o are individually zero. These vanishing atoms are marked with 0† in the simplified I-diagram in Fig. 2.

From this reduced diagram we can easily read that:

Furthermore, one can remove the atoms that vanish to arrive at the reduced I-diagram of Fig. 3. It contains only five nonzero atoms.

We find useful application of this result in the analysis of stationary stochastic processes. Computational mechanics [4] is an information-theoretic framework for analyzing structured stochastic processes. There, a process is considered a channel that communicates its (semi-infinite) past \MS−∞0 to its (semi-infinite) future \MS0∞ through the present [2, 13]. (The following suppresses ∞ when indexing.) An important process property—excess entropy—is the mutual information \EE=\I\Past:\Future between the past and future. \EE is the amount of uncertainty in the future than can be removed by observing the past.

At first blush, it is not clear how to proceed in computing a mutual information between two infinite-dimensional random variables such as this. The answer lies in the concept of causal states. Causal states play a central role as the minimal effective states of a process’ channel. The forward-time causal states comprise the minimal amount of information from the past required for predicting the future. More precisely, the random variable \CausalState+0 is the minimal sufficient statistic of the past about the future. Analogously, the reverse-time causal states \CausalState−0 embody the minimal sufficient statistic of the future about the past—the states needed for optimally retrodicting the past from the future.

By making the following substitutions: X→\Past, W→\CausalState+0, Z→\CausalState−0, and Y→\Future in Eq. (2), we immediately see that the excess entropy (past-future mutual information) has several alternate expressions:

The last identity gives our main result: The excess entropy is the mutual information between the forward-time and reverse-time causal states. As such, this provocatively suggests a communication channel between the forward- and reverse-causal-state processes—a channel that determines the amount information being transmitted through the present. See also Fig. 1 in Ref. [2], analogous to Fig. 3.

Continuing, there are a number of related multivariate mutual information [8] identities that following directly:

Furthermore, making use of the vanishing information atoms, we find that the following Markov chains exist:

If we were to lift the restriction that prescient states are functions of the past (or the future), the resulting forward and reverse generative [14] states may interact in their “gauge” informations. That is, the atom labeled d in Fig. 1 may be nonzero; for more on this, see Ref. [15]. The utility of our mutual information identities is then unclear.

With these application domains in mind, we should call out the analytical benefits of using causal states, along the lines analyzed here. The benefits are particularly apparent in Refs. [25, 26], for example. While closed-form expressions for excess entropy of finite-state processes have existed for several years [2, 13], it is only recently that it has been analyzed for truly complex (infinite-state) processes [25, 26]

. In this work, identifying and then framing calculations around the causal states led to substantial progress. The detailed results here show why this is true: as sufficient statistics, causal states capture the essential structural information in a process. Similar benefits should also accrue when developing empirical estimation and inference algorithms for related information measures.

The results can be extended to multivariate systems as well as to alternative measures of shared information. Consider a system of three variables X, Y, and Z. The I-diagram of interest involves six variables: X, Y, Z, and their sufficient statistics about the other variables: X\mssYZ, Y\mssXZ, and Z\mssXY. This I-diagram contains 26−1=63 atoms. It can be substantially simplified along the lines of the previous section. First, note that if A, B, C, and D form the Markov chain A−B−CD, then we also have the chains A−B−C and A−B−D. Second, recall our primary result that \IX:Y=\IX\mssYZ:Y\mssXZ and note there are similar relations for the pairs (X,Z) and (Y,Z). Combining these two observations and the methods employed in Section II allows one to determine that 53 atoms are identically 0. This reduction results in the I-diagram of Fig. 4.

We demonstrated that it is proper to replace each variable with a sufficient statistic about its other variables without altering information-theoretic interactions among the variables. This is a great asset in many types of analysis and provides a principled method of performing lossless dimensionality reduction. As an important specific application, we demonstrated how the causal states of computational mechanics allow for the efficient computation of the excess entropy.

Our proof method centered around the use of an I-diagram and its atoms. Steps in our proof, such as identifying that the atom labeled m is nonnegative via its containment in \IX:Z∣W, are greatly aided by this graphical tool. Despite this, we believe that a superior proof of these results exists—a proof that does not depend on demonstrating atom-by-atom that all but a select few are zero. Such a proof would, hopefully, apply generically and directly to an N-variable system, hold for the menagerie of multivariate generalizations of the mutual information, and perhaps apply even to the common informations.