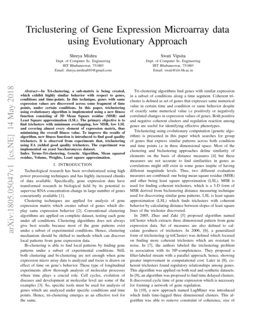 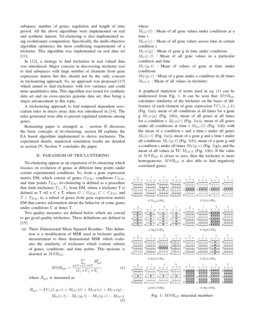 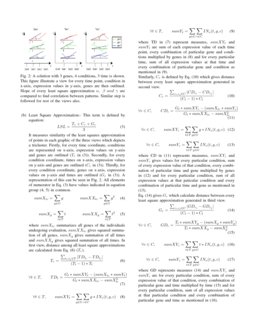 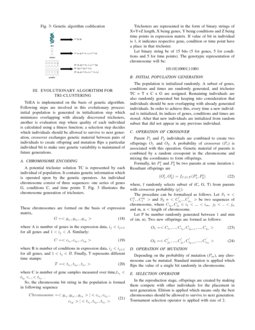 On the Easiest and Hardest Fitness Functions

The hardness of fitness functions is an important research topic in the ...
Jun He, et al. ∙

An important question in evolutionary computation is how good solutions ...
Jun He, et al. ∙

The paper presents a solution for the problem of choosing a method for a...
V. K. Ivanov, et al. ∙

A Theoretical Framework of Approximation Error Analysis of Evolutionary Algorithms

In the empirical study of evolutionary algorithms, the solution quality ...
Jun He, et al. ∙

This paper analises distributed evolutionary computation based on the Re...
P. A. Castillo, et al. ∙

Clustering techniques are applied for analysis of gene expression matrix which creates subset of genes which display same expression behavior [2]. Conventional clustering algorithms are applied on complete dataset, testing each gene under all conditions. Clustering algorithms does not always give best results because most of the gene patterns exist under a subset of experimental conditions. Hence, clustering mechanism should be shifted to methods which can discover local patterns from gene expression data.

Bi-clustering is able to find local patterns by finding gene patterns under a subset of experimental conditions. Still, both clustering and bi-clustering are not enough when gene expression micro array data is analyzed and focus is drawn on effect of time on gene’s behavior. These type of longitudinal experiments allow thorough analysis of molecular processes where time plays a crucial role. Cell cycles, evolution of diseases and development at molecular level are some of the examples [3]. So, specific tools must be used for analysis of genes which are analyzed under specific conditions and time points. Hence, tri-clustering emerges as an effective tool for the same.

Tri-clustering algorithms find genes with similar expression in a subset of conditions along a time segment. Coherent tri-cluster is defined as set of genes that expresses same numerical value in certain time and condition or same behavior despite of exactly same numerical value i.e positively or negatively correlated changes in expression values of genes. Both positive and negative coherent clusters and regulation reaction among genes are useful for identifying effective phenotypes.

Triclustering using evolutionary computation (genetic algorithm) is presented in this paper which searches for group of genes that express similar patterns across both condition and time points i.e in three dimensional space. Most of the clustering and biclustering approaches define similarity of elements on the basis of distance measures

[4] but these measures are not accurate to find similarities in genes as correlations might still exist in some genes inspite of having different magnitude levels. Thus, two different evaluation measures are combined: one being mean square residue (MSR) and other being least square approximation (LSL). MSR is used for finding coherent triclusters, which is a 3-D form of MSR derived from biclustering distance measuring technique used for discovering similar gene patterns. LSL is least square approximation (LSL) which finds triclusters with coherent behavior by calculating distance between slopes of least square lines of the tricluster discovered.

In 2005, Zhao and Zaki [5] proposed algorithm named triCluster which extracts three dimensional pattern from gene expression data. Set of measures are also defined to calculate goodness of triclusters. In 2006, [6], a generalized form of triclustering (g-triCluster) was defined which focused on finding more coherent triclusters which are resistant to noise. In [7], the authors labeled the triclustering problem in association with its NP-completeness. They proposed a filter-labeled stream with a parallel approach, hence, showing greater improvement in computational cost. Later in [8], coherent triclusters found regulatory relationships among genes. This algorithm was applied on both real and synthetic datasets. In [9], an algorithm was proposed to find time delayed clusters. It discovered cycle time of gene expression which is necessary for forming a network of gene regulation.

In [10], a new approach named LagMiner was introduced which finds time-lagged three dimensional clusters. This algorithm was able to remove constraint of coherence, size of subspace, number of genes, regulation and length of time period. All the above algorithms were implemented on real and synthetic dataset. Tri-clustering is also implemented using evolutionary computation. Specifically, the multi-objective algorithm optimizes the most conflicting requirements of a tricluster. This algorithm was implemented on real data set [11].

In [12], a strategy to find triclusters in real valued data was introduced. Major concern in discovering tricluster was to find subspaces with large number of elements from gene expression matrix but this should not be the only concern in triclustering approach. So, an approach was proposed [13]

which aimed to find triclusters with low variance and could mine quantitative data. This algorithm was tested for synthetic data set and on cross-species genome data set, thus being a major advancement in this topic.

A triclustering approach to find temporal dependent association rules in micro array data was introduced in [14]. The rules generated were able to present regulated relations among genes.

Tri-clustering appear as an expansion of bi-clustering which focuses on evolution of genes at different time points under certain experimental conditions. So, from a gene expression matrix EM, which consist of genes GEM, conditions CEM, and time points TEM, tri-clustering is defined as a procedure that finds triclusters T1,…,Tn from EM, where a tricluster T is defined as T =G x C x T, where G⊂GEM, C⊂CEM, and T⊂TEM, ie, a subset of genes from gene expression matrix EM that carries information about the behavior of some genes under conditions C at times T.

Two quality measures are defined below which are crucial to get good quality triclusters. These definitions are defined in [15] .

TriEA is implemented on the basis of genetic algorithm. Following steps are involved in this evolutionary process: initial population is generated in initialization step which minimizes overlapping with already discovered triclusters, another is evaluation step where quality of each individual is calculated using a fitness function; a selection step decides which individuals should be allowed to survive to next generation, crossover exchanges genetic material between pairs of individuals to create offspring and mutation flips a particular individual bit to make sure genetic variability is maintained of future generations.

A potential tricluster solution TC is represented by each individual of population. It contains genetic information which is operated upon by the genetic operators. An individual chromosome consist of three sequences: one series of genes G, conditions C, and time points T. Fig. 3 illustrates the chromosome generation of triclusters.

These chromosomes are formed on the basis of expression matrix,

where A is number of genes in the expression data, ij<ij+1 for all genes and 1<ij<A. Similarly:

where B is number of conditions in expression data, ij<ij+1 for all genes, and 1<ij<B. Finally, T represents different time stamps:

where C is number of gene samples measured over time,ti1<ti2<,…,<tiC .

So, the chromosome bit string in the population is formed in following sequence

Triclusters are represented in the form of binary strings of X+Y+Z length, X being genes, Y being conditions and Z being time points in expression matrix. If value of bit in individual is 1, it indicates respective gene, condition or time point have a place in that tricluster.

Let binary string be of 15 bits (5 for genes, 5 for conditions and 5 for time points). The genotypic representation of chromosome will be:

. A probability of crossover (

Pc) is associated with this operation. Genetic material of parents is combined by a random crosspoint in the chromosome and mixing the coordinates to form offsprings.

Formally, let Pi1 and Pi2 be two parents at some iteration i. Resultant offsprings are

Let P be number randomly generated between 1 and min of (m, n). Two new offsprings are formed as follows:

Depending on the probability of mutation (Pm), any chromosome can be mutated. Standard mutation is applied which flips the value of a single bit randomly in chromosome.

In the reproduction stage, offsprings are created by making them compete with other individuals for the placement in next generation. Elitism is applied which means only the best chromosomes should be allowed to survive to next generation. Tournament selection operator is applied with size of 2.

Fitness of every individual helps algorithm to find best solutions which are carried forward in further generations. Two quality measures are combined in TriEA algorithm, one being 3D Mean Square Residue measure (MSR), referred as fMSR. The second one is fLSL.

where wg, wc and wt represents weights for genes, conditions and times in the tricluster. Higher value of weights indicate that triclusters with many components are found by triEA. Distinction term

If the value of weights is increased, non-overlapping tricluster solutions can be discovered. Fitness Equation Following equation defines this function:

The algorithm TriEA is implemented using R i386 3.3.2 and executed on system of 32 bit operating system and Intel(R)Core(TM)i7-4790 CPU @ 360GHz processor with 4 GB of RAM. TriEA is applied to the yeast (Saccharomyces cerevisiae) cell data [16]. The objective of this project is to find genes whose mRNA levels are controlled by cell cycle processes. When TriEA is applied to dataset of such form, meaningful sequences in cell cycle can be discovered. In this experiment, 6179 genes are examined under 6 conditions named clb2, cln3, cdc15, cdc28, pheromone and elutriation. Gene profiles are captured at 2 time points for cln3, 18 for pheromone, 2 for clb2, 24 for cdc15, 17 for cdc28 and 14 for elutriation. For applying TriEA, conditions with only 2 time points are not considered and first 14 time points of pheromone, elutriation, cdc15, cdc28 are considered in dataset. Hence, the expression matrix consist of 6179 genes, 4 conditions and 14 time points. 200 genes are taken to carry out this experiment due to its increased search space and high computation cost. The original expression data is preprocessed using max-min normalization method such that all the values of matrix lies between 0 to l.

Parameter values for triEA are given in TABLE i@. Values that are missing in dataset are replaced with randomly generated values between 0 and 1.

After the convergence of TriEA, 20 resultant triclusters were derived with minimum MSR and LSL score and it was observed all of them have least square approximation (LSL) score less than the threshold δ i.e 1050. The detailed results are shown in TABLE ii@. The average value of LSL for all tri-clusters obtained is 398.12. Tricluster obtained with least LSL value is 12.59. Also, average value of MSR for all triclusters obtained is 17545.24 which is quite large because this algorithm focus on triclusters with minimum LSL value but not least MSR value of triclusters. Least MSR value obtained is 417.64. Due to large MSR values of triclusters, overall fitness value also increases.

The results in TABLE ii@ are of TriEA for 200 genes, 4 conditions and 14 time points.

Fig. 4 shows convergence of GA towards minimum value for 100 generations.

For Tri-clustering, TriEA is implemented for 200 genes using two quality measures i.e MSR and LSL. It can be concluded from results that GA converges better when both the quality measures are combined to form one fitness function. TriEA yields good quality triclusters with least overlapping among triclusters discovered. But the tricluster quality can be improved more, if both MSR and LSL are minimized by algorithm simultaneously.

The microarray data is mined for longitudinal experiments using algorithm TriEA, but this algorithm can also be applied in other biological domains, for example gene expression data can be combined with gene regulatory data by methods of replacing dimensions of time by chip-chip information depicting transcription factor gene interactions that provides information about gene regulatory networks. This algorithm can be applied on mining RNA-seq data repositories.