Microarray data analysis is one of the major area of research in the field computational biology. Numerous techniques like clustering, biclustering are often applied to microarray data to extract meaningful outcomes which play key roles in practical healthcare affairs like disease identification, drug discovery etc. But these techniques become obsolete when time as an another factor is considered for evaluation in such data. This problem motivates to use triclustering method on gene expression 3D microarray data. In this article, a new methodology based on coarse-grained parallel genetic approach is proposed to locate meaningful triclusters in gene expression data. The outcomes are quite impressive as they are more effective as compared to traditional state of the art genetic approaches previously applied for triclustering of 3D GCT microarray data. 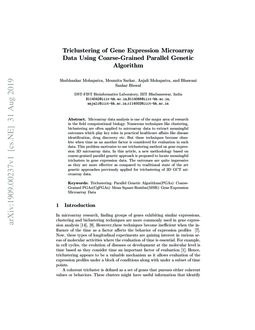 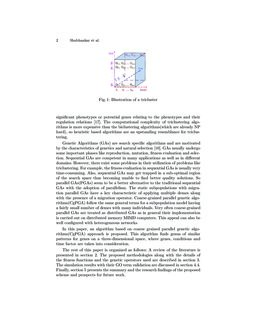 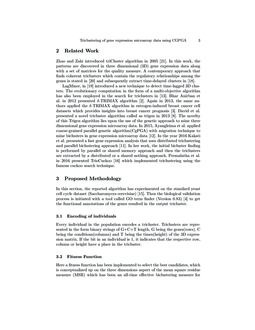 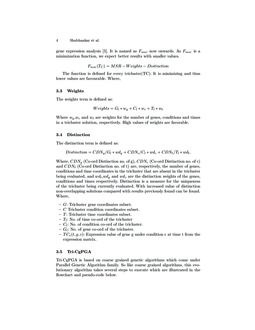 Due to rapid advancement in high-throughput techniques, such as microarr...
Khalid Raza, et al. ∙

Alzheimer's disease is the most common cause of dementia. It is the fift...
Sicheng Hao, et al. ∙

A central goal in neurobiology is to relate the expression of genes to t...
Mu Qiao, et al. ∙

Depression is a common disease which emerges with a disorder in temper. ...
MAJ Dr. Sorush niknamian, et al. ∙

In microarray research, finding groups of genes exhibiting similar expressions, clustering and biclustering techniques are more commonly used in gene expression analysis [14], [9]. However,these techniques become inefficient when the influence of the time as a factor affects the behavior of expression profiles  [7]. Now, these types of longitudinal experiments are gaining interest in various areas of molecular activities where the evaluation of time is essential. For example, in cell cycles, the evolution of diseases or development at the molecular level is time based as they consider time an important factor of evaluation [1]. Hence, triclustering appears to be a valuable mechanism as it allows evaluation of the expression profiles under a block of conditions along with under a subset of time points.

A coherent tricluster is defined as a set of genes that pursues either coherent values or behaviors. These clusters might have useful information that identify significant phenotypes or potential genes relating to the phenotypes and their regulation relations [17]

Genetic Algorithms (GAs) are search specific algorithms and are motivated by the characteristics of genetics and natural selection [10]. GAs usually undergo some important phases like reproduction, mutation, fitness evaluation and selection. Sequential GAs are competent in many applications as well as in different domains. However, there exist some problems in their utilization of problems like triclustering. For example, the fitness evaluation in sequential GAs is usually very time-consuming. Also, sequential GAs may get trapped in a sub-optimal region of the search space thus becoming unable to find better quality solutions. So parallel GAs(PGAs) seem to be a better alternative to the traditional sequential GAs with the adoption of parallelism. The static subpopulations with migration parallel GAs have a key characteristic of applying multiple demes along with the presence of a migration operator. Coarse-grained parallel genetic algorithms(CgPGA) follow the same general terms for a subpopulation model having a fairly small number of demes with many individuals. Very often coarse-grained parallel GAs are treated as distributed GAs as in general their implementation is carried out on distributed memory MIMD computers. This appeal can also be well configured with heterogeneous networks.

In this paper, an algorithm based on coarse grained parallel genetic algorithms(CgPGA) approach is proposed. This algorithm finds genus of similar patterns for genes on a three-dimensional space, where genes, conditions and time factor are taken into consideration.

The rest of this paper is organized as follows: A review of the literature is presented in section 2. The proposed methodologies along with the details of the fitness functions and the genetic operators used are described in section 3. The simulation results with their GO term validation are discussed in section 4.4. Finally, section 5 presents the summary and the research findings of the proposed scheme and prospects for future work.

Zhao and Zaki introduced triCluster algorithm in 2005 [21]. In this work, the patterns are discovered in three dimensional (3D) gene expression data along with a set of matrices for the quality measure. A contemporary approach that finds coherent triclusters which contain the regulatory relationships among the genes is stated in [20] and subsequently extract time-delayed clusters in [18].

introduced a new technique to detect time-lagged 3D clusters. The evolutionary computation in the form of a multi-objective algorithm has also been employed in the search for triclusters in

[13]. Bhar Anirban et al. in 2012 presented δ-TRIMAX algorithm [2]. Again in 2013, the same authors applied the δ-TRIMAX algorithm in estrogen-induced breast cancer cell datasets which provides insights into breast cancer prognosis [3]. David et al. presented a novel tricluster algorithm called as trigen in 2013 [8]. The novelty of this Trigen algorithm lies upon the use of the genetic approach to mine three dimensional gene expression microarray data. In 2015, Ayangleima et al. applied coarse-grained parallel genetic algorithm(CgPGA) with migration technique to mine biclusters in gene expression microarray data [12]. In the year 2016 Kakati et al. presented a fast gene expression analysis that uses distributed triclustering and parallel biclustering approach [11]. In her work, the initial bicluster finding is performed by parallel or shared memory approach and then the triclusters are extracted by a distributed or a shared nothing approach. Premalatha et al. in 2016 presented TrioCuckoo [16] which implemented triclustering using the famous cuckoo search technique.

In this section, the reported algorithm has experimented on the standard yeast cell cycle dataset (Saccharomyces cerevisiae) [15]. Then the biological validation process is initiated with a tool called GO term finder (Version 0.83) [4] to get the functional annotations of the genes resulted in the output tricluster.

Every individual in the population encodes a tricluster. Triclusters are represented in the form binary strings of G+C+T length, G being the genes(rows), C being the conditions(columns) and T being the times(height) of the 3D expression matrix. If the bit in an individual is 1, it indicates that the respective row, column or height have a place in the tricluster.

Here a fitness function has been implemented to select the best candidates, which is conceptualized up on the three dimensions aspect of the mean square residue measure (MSR) which has been an all-time effective biclustering measure for gene expression analysis [5]. It is named as Fmsr now onwards. As Fmsr is a minimization function, we expect better results with smaller values.

The function is defined for every tricluster(TC). It is minimizing and thus lower values are favourable. Where,

The weights term is defined as:

Where wg,wc and wt are weights for the number of genes, conditions and times in a tricluster solution, respectively. High values of weights are favorable.

The distinction term is defined as:

Tri-CgPGA is based on coarse grained genetic algorithms which come under Parallel Genetic Algorithm family. So like coarse grained algorithms, this evolutionary algorithm takes several steps to execute which are illustrated in the flowchart and pseudo-code below.

All the computational simulations are performed in general conditions on a multiprocessor machine with 4 processors Intel Core i7 3.60 GHz with 4 GB RAM and Windows 8.1 64 bit operating system memory. The yeast cell cycle dataset (Saccharomyces cerevisiae) [15] is used for establishing the efficacy of the proposed algorithm. This dataset contains 6179 genes, 4 conditions, and 14 time points. The experiment is performed on the above mentioned dataset along with its two synthetic versions but only reported for the former.

During execution, some parameters have been set up like the crossover probability

Pc, mutation probability Pm, weights: wg for genes, wc for conditions and wt for times, distinction weights: wdg, wdc and wdt for genes, conditions and times respectively. The details of them are available in table 1. As the algorithms are designed for gene filtration (to obtain the solution with a minimum number of genes), the value of wg is set to 0.8 so that maximum number of genes can participate in the solution. While setting up the parameters for the distinction term a higher value is being provided for the genes to cover up as much space as possible in this dimension.

The validation of the results obtained is carried out with the Gene Ontology project (GO) [6]. This analysis renders the ontology of terms which describes gene product annotation data along with its characteristics. The ontology describes attributes like molecular functions, cellular component and the relevant biological processes. The queries associated with the associated genes are addressed in GO using the GO Term Finder (Version 0.83) [4]. The findings of the GO Term analysis are presented in Table 3.

A new framework Tri-CgPGA, based on the coarse-grained parallel genetic approach(CgPGA) to generate the triclusters from gene expression database is proposed in our work. The results of the suggested framework are compared with another state of the art technique called as Trigen algorithm. As the comparison justifies the proposed scheme’s efficiency over the existing schemes considering the computation time, hence it is preferable to adopt parallel GAs over traditional GAs in the triclustering of gene expression 3D microarray data. There exist number of future directions which might further improve this framework: (1) The acquisition of large-scale databases from other standard datasets to measure the performance of the frameworks (2) To further improve the coherence and the computation time, other competent evaluation measures with the suggested or other existing versions of PGAs should be investigated to obtain more meaningful triclusters.