Most existing semantic segmentation methods employ atrous convolution to enlarge the receptive field of filters, but neglect partial information. To tackle this issue, we firstly propose a novel Kronecker convolution which adopts Kronecker product to expand the standard convolutional kernel for taking into account the partial feature neglected by atrous convolutions. Therefore, it can capture partial information and enlarge the receptive field of filters simultaneously without introducing extra parameters. Secondly, we propose Tree-structured Feature Aggregation (TFA) module which follows a recursive rule to expand and forms a hierarchical structure. Thus, it can naturally learn representations of multi-scale objects and encode hierarchical contextual information in complex scenes. Finally, we design Tree-structured Kronecker Convolutional Networks (TKCN) which employs Kronecker convolution and TFA module. Extensive experiments on three datasets, PASCAL VOC 2012, PASCAL-Context and Cityscapes, verify the effectiveness of our proposed approach. We make the code and the trained model publicly available at https://github.com/wutianyiRosun/TKCN. 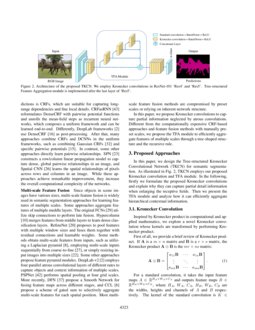 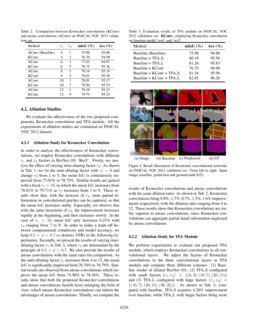 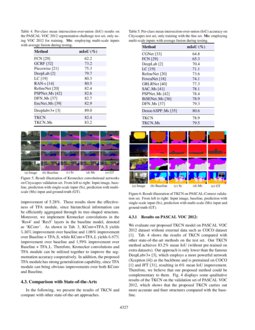 Furthermore, scenes in images have hierarchical structures, which can be decomposed into small-range scenes or local scenes (such as a single object), middle-range scenes (such as multiple objects) and large-range scenes (such as the whole image). How to efficiently capture hierarchical contextual information in complex scenes is significant to semantic segmentation and remains a challenge. Based on this observation, we propose Tree-structured Feature Aggregation (TFA) module to encode hierarchical context information, which is beneficial to better understand complex scenes and improve segmentation accuracy. Our TFA module follows a recursive rule to expand, and forms a tree-shaped and hierarchical structure. Each layer in TFA model has two branches, one branch preserves features of the current region, and the other branch aggregates spatial dependencies within a larger range. The proposed TFA module has two main advantages: (1) Oriented for the hierarchical structures in the complex scenes, TFA module can capture the hierarchical contextual information effectively and efficiently; (2) Compared with the existing multi-scale feature fusion methods based on preset scales and relied on inherent network structures, TFA module can naturally learn representations of multi-scale objects by the tree-shaped structure.

Based on the above observation, we propose Tree-structured Kronecker Convolutional Network (TKCN) for semantic segmentation, which employs Kronecker convolution and TFA module to form a unified framework. We perform experiments on three popular semantic segmentation benchmarks, including PASCAL VOC 2012, Cityscapes and PASCAL-Context. Experimental results verify the effectiveness of our proposed approaches. Our main contributions can be summarized into three aspects:

Semantic Segmentation Semantic segmentation is a fundamental task in computer vision. Recently, approaches based on Deep Convolutional Neural Networks [11, 5, 6] achieve remarkable progress in semantic segmentation task, such as DeconvNets [12], DeepLab [1] and FCNs [2]. FCNs transfer the networks of image classification for pixel-level labeling. DeconvNets employ multiple deconvolution layers to enlarge feature maps and generate whole-image predictions. DeepLab methods use atrous convolutions to enlarge the receptive fields so as to capture contextual information. Following these structures, many frameworks are proposed to further improve the accuracy of semantic segmentation.

Conditional Random Fields One common approach to capture fine-grained details and refine the segmentation predictions is CRFs, which are suitable for capturing long-range dependencies and fine local details. CRFasRNN [13]

reformulates DenseCRF with pairwise potential functions and unrolls the mean-field steps as recurrent neural networks, which composes a uniform framework and can be learned end-to-end. Differently, DeepLab frameworks

[1] use DenseCRF [14] as post-processing. After that, many approaches combine CRFs and DCNNs in the uniform frameworks, such as combining Gaussian CRFs [15] and specific pairwise potentials [16]. In contrast, some other approaches directly learn pairwise relationships. SPN [17] constructs a row/column linear propagation model to capture dense, global pairwise relationships in an image, and Spatial CNN [18] learns the spatial relationships of pixels across rows and columns in an image. While these approaches achieve remarkable improvement, they increase the overall computational complexity of the networks.

proposes to pool features with multiple window sizes and fuses them together with residual connections and learnable weights. Some methods obtain multi-scale features from inputs, such as utilizing a Laplacian pyramid

In this paper, we propose Kronecker convolutions to capture partial information neglected by atrous convolutions. Different from the computationally expensive CRF-based approaches and feature fusion methods with manually preset scales, we propose the TFA module to efficiently aggregate features of multiple scales through a tree-shaped structure and the recursive rule.

In this paper, we design the Tree-structured Kronecker Convolutional Network (TKCN) for semantic segmentation. As illustrated in Fig. 2, TKCN employs our proposed Kronecker convolution and TFA module. In the following, firstly we formulate the proposed Kronecker convolutions and explain why they can capture partial detail information when enlarging the receptive fields. Then we present the TFA module and analyze how it can efficiently aggregate hierarchical contextual information.

For a standard convolution, it takes the input feature maps A∈RHA×WA×CA and outputs feature maps B∈RHB×WB×CB, where HA, WA, CA, HB, WB, CB are the widths, heights and channels of A and B respectively. The kernel of the standard convolution is K∈RCB×CA×(2k+1)×(2k+1) and the bias is b∈RCB. Any feature vector Bt∈RCB in B at position t is the multiplication of kernel K and the associated convolutional patch Xt in A, where t∈[1,WB×HB]∩Z. Xt is a (2k+1)×(2k+1) square with the center of (pt,qt), where pt∈[1,HA]∩Z and qt∈[1,WA]∩Z are coordinates in A. So the coordinates of feature vectors in Xt are:

O, where I is a r2×r2 square matrix which has all the element values of 1. We denote the intra-sharing factor as r2 (1≤r2≤r1), which controls the size of subregions to capture feature vectors and share filter vectors. Thus, the kernel K′ of Kronecker convolution can be formulated as:

where c2∈[1,CB]∩Z, c1∈[1,CA]∩Z. Correspondingly, the associated convolutional patch in A, denoted as Yt , will also expand to a square of (2k+1)r1×(2k+1)r1. Coordinates of feature vectors involved in computation in Yt are:

Let K′′ij=K′′(ir1,jr1)∈RCA, corresponding convolutions patch in A is Ztij=Zt(xij,yij)∈RCA. So

Additionally, if r1=r2=1, Kronecker convolutions will degenerate to standard convolutions.

In order to capture hierarchical context information and represent objects of multiple scales in complex scenes, we propose TFA module. TFA module takes the features extracted by the backbone network as the input. TFA module follows an expansion and stacking rule to efficiently encode multi-scale features. As illustrated in the left subfigure of Fig.

where o0=x, on is the output of step n, fn denotes operators implemented in step n, Hn is the result of TFA module with n steps, and g

represents the concatenation operator. In the proposed TFA module, we employ Kronecker convolutions with different inter-dilating factors and intra-sharing factors to capture multi-scale features, followed by Batch Normalization and ReLU layers. Finally, the features of all the branches will be aggregated. As shown in the right subfigure of Fig.

3, in our experiments, we exploit TFA module with three expansion steps, so the features from all branches are concatenated finally. Particularly, to make a trade-off between computational complexity and model capability, we reduce the output channel of each convolutional layers in TFA module as C/4 if the input feature maps of TFA module has the channel of C.

Following the above expansion and stacking rule, TFA module forms a tree-shaped and hierarchical structure, which can effectively and efficiently capture hierarchical contextual information and aggregate features from multiple scales. Moreover, features learned from the previous steps can be re-explored in the subsequent steps, which is superior to the existing parallel structure with multiple individual branches.

In this section, we perform comprehensive experiments on three semantic segmentation benchmarks to show the effectiveness of our proposed approaches, including PASCAL VOC 2012 [3], Cityscapes [4] and PASCAL-Context [27].

Cityscapes Dataset The Cityscapes datasets [4] contains 5, 000 images collected in street scenes from 50 different cities. The dataset is divided into three subsets, including 2, 975 images in training set, 500 images in validation set and 1, 525 images in test set. High-quality pixel-level annotations of 19 semantic classes are provided in this dataset. Intersection over Union (IoU) averaged over all the categories is adopted for evaluation.

PASCAL-Context Dataset The PASCAL-Context dataset [27] involves 4, 998 images in training set and 5, 105 images in validation set. It provides detailed semantic labels for the whole scene. Our proposed models are evaluated on the most frequent 59 categories and 1 background class.

We take ResNet-101[6] as our baseline model, which employ atrous convolutions with f=2 and f=4 in layers of ‘Res4’ and ‘Res5’, respectively. So the resolution of the predictions can be enlarged from 1/32 to 1/8

. Our loss function is the sum of cross-entropy terms for each spatial position in the output score map, ignoring the unlabeled pixels. All the experiments are performed on the Caffe platform. We employ the “poly” learning rate policy, in which we set the base learning rate to

0.001 and power to 0.9. Momentum and weight decay are set to 0.9 and 0.0001 respectively. For data augmentation, we employ random mirror and random resize between 0.5 and 2 for all training samples.

We evaluate the effectiveness of the two proposed components, Kronecker convolution and TFA module. All the experiments of ablation studies are conducted on PASCAL VOC 2012 dataset.

In the following, we present the results of TKCN and compare with other state-of-the-art approaches.

We evaluate our proposed TKCN model on PASCAL VOC 2012 dataset without external data such as COCO dataset [40]. Tab. 4 shows the results of TKCN compared with other state-of-the-art methods on the test set. Our TKCN method achieves 83.2% mean IoU (without pre-trained on extra datasets). Our approach is only lower than the famous DeepLabv3+ [33], which employs a more powerful network (Xception [41]) as the backbone and is pretrained on COCO [40] and JFT [42], resulting in 6% mean IoU improvement. Fig. 4 displays some qualitative results of the TKCN on the validation set of PASCAL VOC 2012, which shows that the proposed TKCN carries out more accurate and finer structures compared with the baseline.

We report the evaluation results of the proposed TKCN on Cityscapes test set and compare to other state-of-the-art methods in Tab. 5, which shows similar conclusion with the results on PASCAL VOC 2012 dataset. The proposed TKCN achieves 79.5% in mean IoU (only training on fine annotated images), which is slightly lower than the very recent DenseASPP [39] which employs a more powerful network (DenseNet [44]) as the backbone. We visualize some segmentation results on the validation set of Cityscapes in Fig. 5.

Tab. 6 reports the evaluation results of proposed TKCN on PASCAL-Context validation set. Our proposed model yields 51.1% in mean IoU. Similar to [1], employing multi-scale inputs with average fusion further improves the performance to 51.8%, which outperforms current state-of-the-art performance. We visualize the prediction results of our model in Fig. 6.

In this paper, we propose a novel Kronecker convolution for capturing partial information when enlarging the receptive field of filters. Furthermore, based on Kronecker convolutions, we propose Tree-structured Feature Aggregation module which can effectively capture hierarchical spatial dependencies and learn representations of multi-scale objects. Ablation studies show the effectiveness of each proposed components. Finally, our designed Tree-structured Kronecker Convolutional Network achieves state-of-the-art on the PASCAL VOC 2012, PASCAL-Context and Cityscapes semantic segmentation benchmarks, which demonstrates that our approaches are effective and efficient for high-quality segmentation results.