A Bayesian compressive sensing framework is developed for video reconstruction based on the color coded aperture compressive temporal imaging (CACTI) system. By exploiting the three dimension (3D) tree structure of the wavelet and Discrete Cosine Transformation (DCT) coefficients, a Bayesian compressive sensing inversion algorithm is derived to reconstruct (up to 22) color video frames from a single monochromatic compressive measurement. Both simulated and real datasets are adopted to verify the performance of the proposed algorithm. 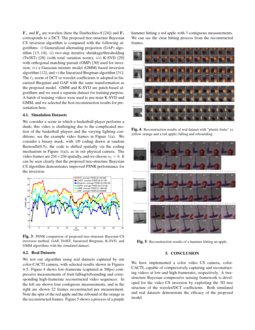 The mathematical theory of compressive sensing (CS) [1] asserts that one can acquire signals from measurements whose rate is much lower than the total bandwidth. Whereas the CS theory is now well developed, challenges concerning hardware implementations [2, 3, 4, 5, 6, 7] of CS-based acquisition devices, especially in optics, have only started being addressed. This paper will introduce a color video CS camera capable of capturing low-frame-rate measurements at acquisition, with high-frame-rate video recovered subsequently via computation (decompression of the measured data).

The Coded Aperture Compressive Temporal Imaging (CACTI) [8] system uses a moving binary mask pattern to modulate a video sequence within the integration time Δt many times prior to integration by the detector. The number of high-speed frames recovered from a coded-exposure measurement depends on the speed of video modulation. Within the CACTI framework, modulating the video nt times per second corresponds to moving the mask nt pixels within the integration time Δt. If nt frames are to be recovered per compressive measurement by a camera collecting data at 1/Δt frames-per-second (fps), the time variation of the code is required to be nt/Δt fps. The liquid-crystal-on-silicon (LCoS) modulator used in [9, 10] can modulate as fast as 3000 fps by pre-storing the exposure codes, but, because the coding pattern is continuously changed at each pixel throughout the exposure, it requires considerable energy consumption (>3W). The mechanical modulator in [8], by contrast, modulates the exposure through periodic mechanical translation of a single mask (coded aperture), using a pizeoelectronic translator that consumes minimal energy (∼0.2W). The coded aperture compressive temporal imaging (CACTI) [8] now has been extended to the color video [11], which can capture “R”, “G” and “B” channels of the context. By appropriate reconstruction algorithms [12, 13, 14], we can get nt frames color video from a single gray-scale measurement.

While numerous algorithms have been used for CS inversion, the Bayesian CS algorithm [16] has been shown with significant advantages of providing a full posterior distribution. This paper develops a new Bayesian inversion algorithm to reconstruct videos based on raw measurements acquired by the color-CACTI camera. By exploiting the hybrid three dimensional (3D) tree-structure of the wavelet and DCT (Discrete Cosine Transform) coefficients, we have developed a Hidden Markov tree (HMT) [17] model in the context of a Bayesian framework. Research in [18, 19, 20, 21, 22] has shown that by employing the HMT structure of an image, the CS measurements can be reduced. This paper extends this HMT to 3D and a sophisticated 3D tree-structure is developed for video CS, with color-CACTI shown as an example. Experimental results with both simulated and real datasets verify the performance of the proposed algorithm. The basic model and inversion method may be applied to any of the compressive video cameras discussed above.

Let z(x,y,t) be the continuous/analog spatiotemporal volume of the video being measured; ϕ(x−r(t),y−s(t)) represents a moving mask (code) with (r(t),s(t)) denoting its spatial translation at time t; and h(x,y) denotes the camera spatial sampling function, with spatial resolution ΔxΔy. The coded aperture compressive camera system modulates each temporal segment of duration Δt with the moving mask (the motion is periodic with the period equal to Δt), and collapses (sums) the coded video into a single photograph (∀ l≥1):

i=1,…,nx and j=1,…,ny, with the detector size nx×ny pixels. The set of data {yijl}, which below we represent as Yl, corresponds to the lth compressive measurement. The code/mask ϕ(x,y) is here binary, corresponding to photon transmission and blocking (see Figure 1).

where eijl is an added noise term, Yl,Φk,Zkl,El∈Rnx×ny, and ⊙ denotes element-wise multiplication (Hadamard product). In (3), Φk denotes the mask/code at the kth shift position (approximately discretized in time), and Zkl is the underlying video, for video frame k within CS measurement l. Dropping subscript l for simplicity, (3) can be written as

2.3 Mosaicing and De-mosaicing of Color Video

We record temporally compressed measurements for RGB colors on a Bayer-filter mosaic, where the three colors are arranged in the pattern shown in the right bottom of Figure 1. The single coded image is partitioned into four components, one for R and B and two for G (each is 1/4 the size of the original spatial image). The CS recovery (video from a single measurement) is performed separately on these four mosaiced components, prior to demosaicing as shown in Figure 1(b). One may also jointly perform CS inversion on all 4 components, with the hope of sharing information on the importance of (here wavelet and DCT) components; this was also done, and the results were very similar to processing R, B, G1 and G2 separately. Note that this is the key difference between color-CACTI and the previous work of CACTI in [8].

An image’s zero-tree structure [23] has been investigated thoroughly since the advent of wavelets [24]. The 3D wavelet tree structure of video, an extension of the 2D image, has also attracted extensive attention in the literature [25]. Xiong et al. introduced a tree-based representation to characterize the block-DCT transform associated with JPEG [26]. For the video representation, we here use the wavelet in space and DCT in time.

When the tree structure is used in 3D DCT, we consider the block size of the 3D DCT is {Px,Py,Pt}, and Px=Py=Pt=2L. The parent-children linkage is the same as with the wavelet coefficients [26].

2) Persistence becomes stronger at finer scales (the confidence of the probability of the binary part is proportional to the number of coefficients at that scale).

Let Fx∈Rnx×nx, Fy∈Rny×ny, Ft∈Rnt×nt be orthonormal matrices defining bases such as wavelets or the DCT [24]. Define

The measurement noise is modeled as zero mean Gaussian with precision matrix (inverse of the covariance matrix) α0I, where I

is the identity matrix. We have:

To model the sparsity of the 3D coefficients of wavelet/DCT, the spike-and-slab prior is imposed on θ as:

where w∈Rnxnynt is a vector of non-sparse coefficients and z is a binary vector (zero/one indicators) denoting the two state of the HMT [17], with “zero” signifying the “low-state” in the HMT and “one” symbolizing the “high-state”. Note when the coefficients lie in the “low-state”, they are explicitly set to zero, which leads to the sparsity.

To model the linkage of the tree structure across the scales of the wavelet/DCT, we use the the binary vector, z

, which is drawn from a Bernoulli distribution. The parent-children linkage is manifested by the probability of this vector. We model

is drawn from a Gaussian distribution with the precision modeled as a multiplicative Gamma prior.

The full Bayesian model is:

where {i,ℓ} denotes the ith component at level ℓ, and ℓ=0 denotes the scaling coefficients of wavelet (or DC level of a DCT).

In the experiments, we use the following settings:

where Nℓ is the number of coefficients at ℓth level, and N is the length of θ.

We developed the variational Bayesian methods to infer the parameters in the model as in [20]. The posterior inference of αℓ, thus τℓ is different from the model in [20], and we show it below:

Both simulated and real datasets are adopted to verify the performance of the proposed model for video reconstruction. The hyperparameters are setting as

[12]; and v) the linearized Bregman algorithm [31]. The ℓ1-norm of DCT or wavelet coefficients is adopted in linearized Bregman and GAP with the same transformation as the proposed model. GMM and K-SVD are patch-based algorithms and we used a separate dataset for training purpose. A batch of training videos were used to pre-train K-SVD and GMM, and we selected the best reconstruction results for presentation here.

We consider a scene in which a basketball player performs a dunk; this video is challenging due to the complicated motion of the basketball players and the varying lighting conditions; see the example video frames in Figure 1(a). We consider a binary mask, with 1/0 coding drawn at random Bernoulli(0.5); the code is shifted spatially via the coding mechanism in Figure 1(a)), as in our physical camera. The video frames are 256×256 spatially, and we choose nt=8. It can be seen clearly that the proposed tree-structure Bayesian CS algorithm demonstrates improved PSNR performance for the inversion.

We have implemented a color video CS camera, color-CACTI, capable of compressively capturing and reconstructing videos at low-and high-framerates, respectively. A tree-structure Bayesian compressive sensing framework is developed for the video CS inversion by exploiting the 3D tree structure of the wavelet/DCT coefficients. Both simulated and real datasets demonstrate the efficacy of the proposed model.