The understanding of sensor data has been greatly improved by advanced deep learning methods with big data. However, available sensor data in the real world are still limited, which is called the opportunistic sensor problem. This paper proposes a new variant of neural machine translation seq2seq to deal with continuous signal waves by introducing the window-based (inverse-) representation to adaptively represent partial shapes of waves and the iterative back-translation model for high-dimensional data. Experimental results are shown for two real-life data: earthquake and activity translation. The performance improvements of one-dimensional data was about 46 and that of high-dimensional data was about 1625 the original seq2seq. 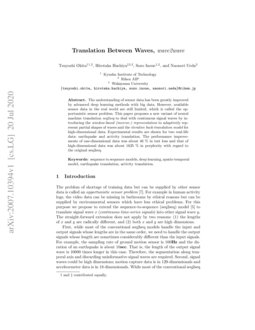 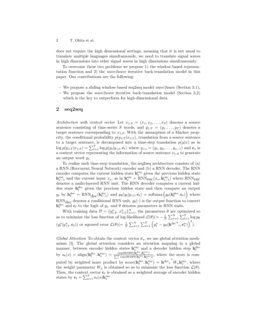 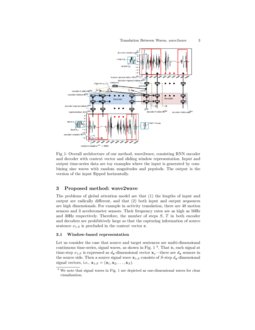 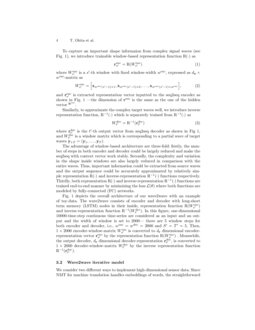 Through the development of neural machine translation, the quality of ma...
Jan Niehues, et al. ∙

With the advent of big data and the birth of the data markets that sell ...
Nikhil Jha, et al. ∙

The problem of shortage of training data but can be supplied by other sensor data is called an opportunistic sensor problem [7]. For example in human activity logs, the video data can be missing in bathrooms by ethical reasons but can be supplied by environmental sensors which have less ethical problems. For this purpose we propose to extend the sequence-to-sequence (seq2seq) model [5] to translate signal wave x (continuous time-series signals) into other signal wave y. The straight-forward extension does not apply by two reasons: (1) the lengths of x and y are radically different, and (2) both x and y are high dimensions.

First, while most of the conventional seq2seq models handle the input and output signals whose lengths are in the same order, we need to handle the output signals whose length are sometimes considerably different than the input signals. For example, the sampling rate of ground motion sensor is 100Hz and the duration of an earthquake is about 10sec. That is, the length of the output signal wave is 10000 times longer in this case. Therefore, the segmentation along temporal axis and discarding uninformative signal waves are required. Second, signal waves could be high dimensions; motion capture data is in 129-dimensionals and acceleormeter data is in 18-dimensionals. While most of the conventional seq2seq does not require the high dimensional settings, meaning that it is not usual to translate multiple languages simultaneously, we need to translate signal waves in high dimensions into other signal waves in high dimensions simultaneously.

To overcome these two problems we propose 1) the window-based representation function and 2) the wave2wave iterative back-translation model in this paper. Our contributions are the following:

. With the assumption of a Markov property, the conditional probability

is a context vector representing the information of source sentence

To realize such time-step translation, the seq2seq architecture consists of (a) a RNN (Reccurent Neural Network) encoder and (b) a RNN decoder. The RNN encoder computes the current hidden state

to the logit of

To obtain the context vector cs, we use global attention mechanism [5]. The global attention considers an attention mapping in a global manner, between encoder hidden states hencs and a decoder hidden step hdect by , where the score is computed by weighted inner product by score(hdect,hencs)=hdect⊤Wahencs, where the weight parameter Wa is obtained so as to minimize the loss function L(θ). Then, the context vector ct is obtained as a weighted average of encoder hidden states by ct=∑Ss=1at(s)hencs

The problems of global attention model are that (1) the lengths of input and output are radically different, and that (2) both input and output sequences are high dimensionals. For example in activity translation, there are

48 motion sensors and 3 accelerometer sensors. Their frequency rates are as high as 50Hz and 30Hz respectively. Therefore, the number of steps S, T in both encoder and decoders are prohibitively large so that the capturing information of source sentence x1:S is precluded in the context vector c.

Let us consider the case that source and target sentences are multi-dimensional continuous time-series, signal waves, as shown in Fig. 1 111We note that signal waves in Fig. 1 are depicted as one-dimensional waves for clear visualization.. That is, each signal at time-step x1:S is expressed as dx-dimensional vector xs—there are dx sensors in the source side. Then a source signal wave x1:S consists of S-step dx-dimensional signal vectors, i.e., x1:S=(x1,x2,…,xS).

and rencs′ is extracted representation vector inputted to the seq2seq encoder as shown in Fig. 1 —the dimension of renc is the same as the one of the hidden vector henc.

Similarly, to approximate the complex target waves well, we introduce inverse representation function, R−1(⋅) which is separately trained from R−1(⋅) as

where rdect′ is the t′-th output vector from seq2seq decoder as shown in Fig 1, and Wdect′ is a window matrix which is corresponding to a partial wave of target waves y1:T=(y1,…,yT).

The advantage of window-based architecture are three-fold: firstly, the number of steps in both encoder and decoder could be largely reduced and make the seq2seq with context vector work stably. Secondly, the complexity and variation in the shape inside windows are also largely reduced in comparison with the entire waves. Thus, important information could be extracted from source waves and the output sequence could be accurately approximated by relatively simple representation R(⋅) and inverse-representation R−1(⋅) functions respectively. Thirdly, both representation R(⋅) and inverse-representation R−1(⋅) functions are trained end-to-end manner by minimizing the loss L(θ) where both functions are modeled by fully-connected (FC) networks.

depicts the overall architecture of our wave2wave with an example of toy-data. The wave2wave consists of encoder and decoder with long-short term memory (LSTM) nodes in their inside, representation function

[4]. However, the motion generated by simulators are limited only long periods, longer than 1 second due to heavy computational costs, and the lack of detailed knowledge of the subsurface structure.

A large amount of ground motion data have been collected by K(kyosin)-NET over the past 20 years in Japan. Machine learning approaches would be effective to predict broadband-ground motions including periods less than

As for training data, we use 365 ground motion data collected at the observation station, IBR011, located at Ibaraki prefecture, Japan from Jan. 1, 2000 to Dec. 31, 2017—originally there are 374 data but 10 data related Tohoku earthquakes and the source deeper than 300m are removed. As for testing, we use 9 ground-motion data of earthquakes occurred at the beginning of 2018.

In addition, both long and broadband ground motion data are cropped to the fixed length, i.e., s=t=10000ms and its amplitude is smoothed using RMS (Root Mean Square) envelope with 200ms windows to capture essential property of earthquake motion. Moreover, as for data augmentation, in-phase and quadrature components, and those absolute values are extracted from each ground motion. That is, there are totally 365×3 training data. Fig. (a)a shows an example of 3 components of a ground motion of earthquake occurred on May 17, 2018, Chiba in Japan, and corresponding RMS envelopes.

Table 1 depict the mean-squared loss of training of three methods, simple encoder-decoder, simple seq2seq, and our proposed method with the same setting as the toy data except henc=hdec=50. This table shows that our wave2wave methods basically outperform other methods although wave2wave with the small window-width wenc=wdec=500 is lost by simple encoder-decoder with large hidden layer dz=1000 in train loss. This indicates that window-based representation and inverse-representation functions are helpful similarly in toy data.

It is expected that predicted broadband-motion combined with simulated long-period motion could be used for more accurate estimation of the damages on buildings and infrastructures.

This section deploys wave2wave for activity translation (Refer Fig. 2). Until the previous section, the signals were one dimensions. The signals in this section are high-dimensional in their inputs as well as outputs. The dimensions of motion capture, video, and accelerometer are 129, 48, and 18 dimensions, respectively, in

the case of MHAD dataset222http://tele-immersion.citris-uc.org/berkeley––mhad.. Under the mild assumption that the targeted person which are recorded in three different modalities, including motion capture, video, and accelerometer, are synchronized and the noise such as the effect of other surrounding persons is eliminated. Hence, we assume that each signal shows one of the multi-view projections of a single person. That is, we can intuitively think that they are equivalent. Under this condition, we do a translation from motion capture to video (Similarly, accelerometer to motion capture, and video to accelerometer, and these inverse directions).

Additinaly structures in wave2wave is the multi-scalability since the frame rate of multimodal data are considerably different. We adopted the approach of multi-resolution spatial pyramid by a dynamic pose [6]. We assume that the sequence of frames across modalities is synchronized and sampled at a given temporal step v and concatenated to form a spatio-temporal 3-d volume.

We used the MHAD dataset from Berkeley. We used video, accelerometer, and mocap modalities. We used video with Cluster-01/Cam01-02 subsets, and the whole mocap (optical) and accelerometer data with 12 persons/5 trials. Video input was preprocessed by OpenPose which identifies 48 dimensions of vectors. Optical mocap had the position of the keypoints whose dimension was 129. Accelerometer were placed in 6 places in the body whose dimension was 18. We used the parameters in wave2wave with loss function L(θ)=−1N∑Nn=1 logpθ(yn1:T|xn1:S) with LSTM modules 500, embedding size 500, dropout 3, maximum sentence length 400, and batch size 100. We used Adam optimizer. We used v=2,3,4 for multi-resolution spatial pyramid. We used the same parameter set for wave2wave interactive model. We use Titan Xp.

One characteristic of activity translation can be observed in the direction of wave2wave translation with accelerometer to video, e.g. acc2cam. That is, the accelerometer data takes the form that is not understandable by human beings by its nature but translation to video makes this visible. By selecting 50 test cases, the human could understand 48 cases. 96 % is fairly good. The second characteristic of activity translation is opportunistic sensor problem, e.g. when we cannot use video camera in bathrooms, we use other sensor modality, e.g. accelerometer, and then translate it to video which can use at this opportunity. This corresponds to the case of acceleromter to video, e.g. acc2cam. We conduct this experiments. Upon watching the video signals on a screen we could observe the basic human movements. By selecting 50 test cases, the human could understand 43 cases.

Major experimental results are shown in Table 4. We used wenc={1,5,10,20,30,60}. For each window size we measured one target with perplexity (ppl) and the whole target with perplexity (ppl). We compared several wave2wave results with (1) the seq2seq model without dimensionality reduction (via clustering), (2) the seq2seq model with dimensionality reduction. All the experiments are done with the direction from accelerometer to motion capture (acc2moc).

Firstly, the original seq2seq model did not work well without dimensionality reduction of input space. The perplexity was 58000.42. This figure suggests that the optimization of deep learning did not go progress due to the complexity of the training data or the bad initialization. However, the results were improved fairly well if we do dimensionality reduction using clustering. This figure is close to the results by wave2wave (iterative) with wenc=60.

We proposed a method to translate between waves wave2wave with a sliding window-based mechanism and iterative back-translation model for high-dimensional data. Experimental results for two real-life data show that this is positive. Performance improvements were about 46 % in test loss for one dimensional case and about 1625 % in perplexity for high-dimensional case using the iterative back-translation model.