This paper proposes a method to translate multilevel flow modeling (MFM) into a first-order language (FOL), which enables the utilisation of logical techniques, such as inference engines and abductive reasoners. An example of this is a planning task for a toy plant that can be solved in FOL using abduction. In addition, owing to the expressivity of FOL, the language is capable of describing actions and their preconditions. This allows the derivation of procedures consisting of multiple actions. 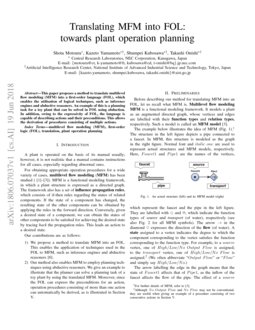 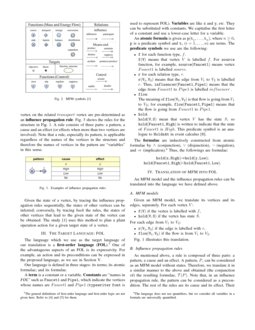 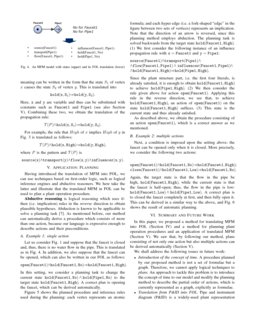 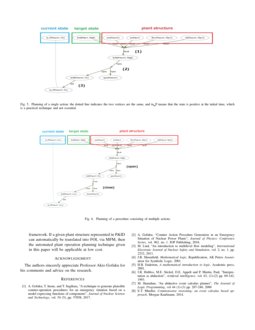 Power plant is a complex and nonstationary system for which the traditio...
Rui Xu, et al. ∙

A method is proposed to identify and localize the cause of network colla...
Shimiao Li, et al. ∙

A plant is operated on the basis of its manual usually; however, it is not realistic that a manual contains instructions for all cases, especially regarding abnormal ones.

For obtaining appropriate operation procedures for a wide variety of cases, multilevel flow modeling (MFM) has been studied ([1, 2, 3]). MFM is a functional modeling framework, in which a plant structure is expressed as a directed graph. The framework also has a set of influence propagation rules, which consists of if-then rules regarding the states of related components. If the state of a component has changed, the resulting state of the other components can be obtained by applying the rules in the forward direction. Conversely, given a desired state of a component, we can obtain the states of other components to be satisfied for achieving the desired state by tracing back the propagation rules. This leads an action to a desired state.

Before describing our method for translating MFM into an FOL, let us recall what MFM is. Multilevel flow modeling （MFM） is a functional modeling framework. It models a plant as an augmented directed graph, whose vertices and edges are labelled with their function types and relation types, respectively. Such a model is called an MFM model [3].

The example below illustrates the idea of MFM (Fig. 1).111For further details of MFM, refer to [3]. The structure in the left figure depicts a pipe connected to a faucet. In MFM, this structure is modeled as the graph in the right figure. Normal font and italic one are used to represent actual structures and MFM models, respectively.

Here, Faucet1 and Pipe1 are the names of the vertices, which represent the faucet and the pipe in the left figure. They are labelled with ⊙ and ◊→, which indicate the function types of source and transport (of water), respectively (see also Fig. 2 for all MFM symbols). The arrow → in the diamond ◊ expresses the direction of the flow (of water). A state assigned to a vertex indicates the degree to which the component corresponding to the vertex satisfies the function corresponding to the function type. For example, to a source vertex, one of High/Low/No Output Flow is assigned; to the transport vertex, one of High/Low/No Flow is assigned.222Although No Output Flow and No Flow may not be conventional, they are useful when giving an example of a procedure consisting of two consecutive actions in Section V. (We often abbreviate “Output Flow” or “Flow” and simply say High/Low/No.)

The arrow labelling the edge in the graph means that the state of Faucet1 affects that of Pipe1, as the inflow of the faucet affects the flow of the pipe. The effect of a source vertex on the related transport vertex are pre-determined as an influence propagation rule. Fig. 3 shows the rules for the structure in Fig. 1. A rule consists of three parts: a pattern, a cause and an effect (or effects when more than two vertices are involved). Note that a rule, especially its pattern, is applicable regardless of the names of the vertices in the structure and therefore the names of vertices in the pattern are “variables” in this sense.

The language which we use as the target language of our translation is a first-order language (FOL).333The general definitions of first-order language and first-order logic are not given here. Refer to [4] and[5] for them. One of the advantageous aspects of an FOL is its expressivity. For example, an action and its preconditions can be expressed in the proposed language, as we see in Section V.

Our language is defined in three stages: its terms; its atomic formulae; and its formulae.

A term is a constant or a variable. Constants are “names in FOL” such as Faucet1 and Pipe1, which indicate the vertices whose names are Faucet1 and Pipe1 (typewriter font is used to represent FOL). Variables are like x and y, etc. They can be substituted with constants. We capitalise the first letter of a constant and use a lower-case letter for a variable.

The formulae are inductively constructed from atomic formulae by ∧ (conjunction), ∨ (disjunction), ¬ (negation), and ⇒ (implication).444The language does not use quantifiers, but we consider all variables in a formula are universally quantified. Thus, the followings are formulae:

Iv Translation of MFM into FOL

An MFM model and the influence propagation rules can be translated into the language we have defined above.

Given an MFM model, we translate its vertices and its edges, separately. For each vertex V:

As mentioned above, a rule is composed of three parts: a pattern, a cause and an effect. A pattern, P, can be considered as an MFM model without states. Therefore, we translate it in a similar manner to the above and obtained (the conjunction of) the resulting formulae, T(P). Note that, in an influence propagation rule, the pattern can be considered as a precondition. The rest of the rules are its cause and its effect. Their meaning can be written in the form that the state S1 of vertex x causes the state S2 of vertex y. This is translated into

Here, x and y are variable and thus can be substituted with constants such as Faucet1 and Pipe1 (see also Section V). Combining these two, we obtain the translation of the propagation rule:

For example, the rule that High of x implies High of y in Fig. 3 is translated as follows:

where P is the pattern and T(P) is

Having introduced the translation of MFM into FOL, we can use techniques based on first-order logic, such as logical inference engines and abductive reasoners. We here take the latter and illustrate that the translated MFM in FOL can be used to plan a plant operation procedure.

Abductive reasoning is logical reasoning which uses if-then (i.e. implication) rules in the reverse direction to obtain plausible hypotheses. Abduction is known to be applicable to solve a planning task [7]. As mentioned before, our method can automatically derive a procedure which consists of more than one action, because our language is expressive enough to describe actions and their preconditions.

Figure 5 shows the planned procedure and inference rules used during the planning: each vertex represents an atomic formula; and each hyper edge (i.e. a fork-shaped “edge” in the figure between two sets of vertices) represents an implication. Note that the direction of an arrow is reversed, since this planning method employs abduction. The planning task is solved backwards from the target state hold(Faucet1,High). (1) We first consider the following instance of an influence propagation rule with x=Faucet1 and y=Pipe1:

As described above, we obtain the procedure consisting of an action open(Faucet1), which is a correct answer as we mentioned.

Next, a condition is imposed upon the setting above: the faucet can be opened only when it is closed. More precisely, we consider the following two actions:

Again, the target state is that the flow in the pipe be high, hold(Faucet1,High), while the current state is that the faucet is half-open; thus, the flow in the pipe is low: hold(Faucet1,Low)∧hold(Pipe1,Low). A correct plan is to closed the faucet completely at first, and then fully open it. This can be derived in a similar way to the above, and Fig. 6 shows the result of automatic planning.

In this paper, we proposed a method for translating MFM into FOL (Section IV) and a method for planning plant operation procedures and an application of translated MFM (Section V). We saw that, by following our method, plans consisting of not only one action but also multiple actions can be derived automatically (Section V).

We shall address the following issues in future work:

The authors sincerely appreciate Professor Akio Gofuku for his comments and advice on the research.