Self-attention (SA), which encodes vector sequences according to their pairwise similarity, is widely used in speech recognition due to its strong context modeling ability. However, when applied to long sequence data, its accuracy is reduced. This is caused by the fact that its weighted average operator may lead to the dispersion of the attention distribution, which results in the relationship between adjacent signals ignored. To address this issue, in this paper, we introduce relative-position-awareness self-attention (RPSA). It not only maintains the global-range dependency modeling ability of self-attention, but also improves the localness modeling ability. Because the local window length of the original RPSA is fixed and sensitive to different test data, here we propose Gaussian-based self-attention (GSA) whose window length is learnable and adaptive to the test data automatically. We further generalize GSA to a new residual Gaussian self-attention (resGSA) for the performance improvement. We apply RPSA, GSA, and resGSA to Transformer-based speech recognition respectively. Experimental results on the AISHELL-1 Mandarin speech recognition corpus demonstrate the effectiveness of the proposed methods. For example, the resGSA-Transformer achieves a character error rate (CER) of 5.86 SA-Transformer. Although the performance of the proposed resGSA-Transformer is only slightly better than that of the RPSA-Transformer, it does not have to tune the window length manually. 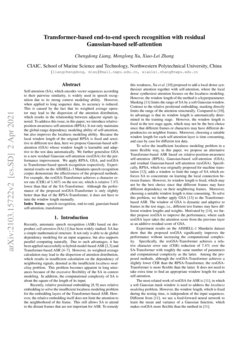 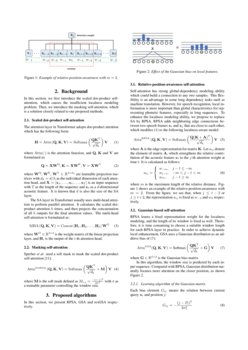 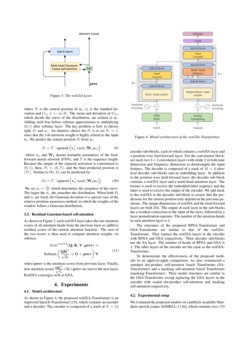 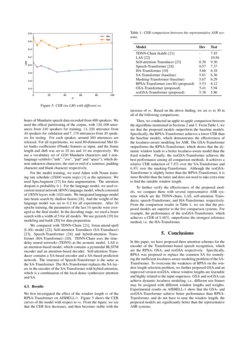 self-attention (SA) [1] has been widely studied. SA has a simple mathematical structure. It not only is able to do global dependency modeling for an input sequence, but also supports parallel computing naturally. Due to such advantages, it has been applied successfully to hybrid-model-based ASR [2, 3] and Transformer-based ASR [4, 5, 6, 7]. However, its weighted average calculation may lead to the dispersion of attention distribution, which results in insufficient calculation on the dependency of neighboring signals, denoted as the insufficient localness modeling problem. This problem becomes apparent in long utterances because of the excessive flexibility of the SA in context modeling. In addition, the computational complexity of SA is about the square of the length of its input.

Recently, relative positional embedding [8, 9] uses relative embedding to solve the insufficient localness modeling problem for the embedding layers of the Transformer-based ASR. However, the relative embedding itself does not limit the attention to the neighborhood of the frame. This still allows SA to attend to the distant frames that are not important for ASR. To remedy this weakness, Xu et al. [10]

[11] limits the range of SA by a soft Gaussian window. Contrast to the relative positional embedding, masking directly limits the range of the attention structurally. Compared to [10], its advantage is that its window length is automatically determined in the training stage. However, the window length is fixed in the test stage again, which may not be the best choice since that different frames or characters may have different dependencies on neighbor frames. Moreover, choosing a suitable window length for each self-attention layer is time consuming, and case by case for different test data.

To solve the insufficient localness modeling problem in a more flexible way, in this paper, we propose an alternative Transformer-based ASR based on relative-position-awareness self-attention (RPSA), Gaussian-based self-attention (GSA), and residual Gaussian-based self-attention (resGSA). Specifically, RPSA, which was originally proposed for machine translation [12], adds a window to limit the range of SA which enforces SA to concentrate on learning the local connection between frames. However, its window length is fixed, which may not be the best choice since that different frames may have different dependency on their neighboring frames. Moreover, choosing a suitable window length is time consuming. To solve this problem, we further apply GSA [13] to the Transformer-based ASR. The window of GSA is dynamic and adaptive to frames in the test stage, i.e., different test frames may have different window lengths and weights. Motivated by [14], we further propose resGSA to improve the performance, where each resGSA layer takes the attention score from the previous layer as an additive residual score of GSA.

The most related work of resGSA for ASR is [11], in which a soft Gaussian mask window is used to address the localness modeling problem. However, the window length, which is fixed during the testing time, is independent of the input sequences. Different from [11]

, we use a feed-forward neural network to learn the mean and variance of a Gaussian function, which makes resGSA more flexible than the method in

The attention layer in Transformer adopts dot-product attention which has the following form:

where Attn(⋅) is the attention function, and Q, K and V are formulated as:

where WQ, WK, WV∈Rd×dk are learnable projection matrices with dk=d/h as the individual dimension of each attention head, and X=[x1,…,xt,…,xT] is an input sequence with T as the length of the sequence and xt as a d-dimensional acoustic feature. It is known that d is also the size of the SA layer.

The SA layers in Transformer usually uses multi-head attention to perform parallel attention. It calculates the scaled dot-product attention h times, and then projects the concatenation of all h outputs for the final attention values. The multi-head self-attention is formulated as:

where WO∈Rd×d is the weight matrix of the linear projection layer, and Hi is the output of the i-th attention head.

where M is the soft mask defined as Mi,j=−(i−j)22σ2 with σ as a trainable parameter controlling the window size.

In this section, we present RPSA, GSA and resGSA respectively.

Self-attention has strong global-dependency modeling ability which could build a connection to any two samples. This flexibility is an advantage in some long dependency tasks such as machine translation. However, for speech recognition, local information is more important than global characteristics for representing phonetic features, especially in long sequences. To enhance the localness modeling ability, we propose to replace SA by RPSA. RPSA adds neighboring edge connections between two speech frames xt and xj that are close to each other, which modifies (1) to the following localness-aware model:

where A is the edge representation for matrix K. Let atj denote the element of matrix A, which strengthens the relative contribution of the acoustic feature xt to the j-th attention weight at time t. It is calculated as follows:

where m is the maximum length of the relative distance. Figure 1 shows an example of the relative-position-awareness with m=2. From the figure, we see that, when j≤t−2 or j≥t+2, the representation atj is fixed as w−2 and w2 respectively.

RPSA learns a fixed representation weight for the localness modeling, and the length of its window is fixed as well. Therefore, it is time consuming to choose a suitable window length for each RPSA layer in practice. In order to achieve dynamic local enhancement, GSA uses Gaussian distribution as an additive bias of (

where G∈Rd×d is the Gaussian bias matrix.

In this algorithm, the window size is predicted by each input sequence. Compared with RPSA, Gaussian distribution naturally focuses more attention on the closer position, as shown Figure 2.

3.2.1 Learning algorithm of the Gaussian matrix

where Pt is the central position of xt, σt

is the standard deviation and

Gtj∈(−∞,0]. The mean and deviation of Gtj, which decide the curve of the distribution, are related to xi. Adding such bias before softmax approximates to multiplying (0,1]

after softmax layer. The key problem is how to choose right

Pt and σt. An intuitive choice for Pt is to set Pt=t, because the t-th attention weight is highly related to the input xt. But we predict the central positon Pt from xt:

where vp and Wp

N is the sequence length. Sigmoid activate is applied and its output is in (0,1). Then Pt∈(0,N), and final predicted position is ⌈Pi⌉. The σt is set as σt=Dt2, and similar to (9), Dt can be predicted by:

The value of σt determines the steepness of the curve. The larger the σt, the smoother the distribution. When both Pt and σt are fixed, the Gaussian deviation is a special case of the relative-position-awareness method, in which the weight of the window weights follow Gaussian distribution.

As shown in Figure 3, each resGSA layer takes the raw attention scores of all attention heads from the previous layer as additive residual scores of the current attention function. The sum of the two scores is then used to compute attention weights via softmax:

As shown in Figure 4, the proposed resGSA-Transformer is an improved Speech-Transformer [15], which contains an encoder and a decoder. The encoder is composed of a stack of N=12 encoder sub-blocks, each of which contains a resGSA layer and a position-wise feed-forward layer. For the convolution block, we stack two 3×3

convolution layers with stride 2 in both time dimension and frequency dimension to downsample the input features. The decoder is composed of a stack of

M=6 identical decoder sub-blocks and an embedding layer. In addition to the position-wise feed-forward layer, the decoder sub-block contains a resGSA layer and a multi-head attention layer. The former is used to receive the embedded label sequence and the latter is used to receive the output of the encoder. We add mask to the resGSA in the decoder sub-block to ensure that the predictions for the current position only depend on the previous positions. The output dimensions of resGSA and the feed-forward layers are both 256

. The output of each layer in the sub-blocks has a residual connection to the input of the layer, followed by a layer normalization operator. The number of the attention heads in each attention layer is

We evaluated the proposed models on a publicly-available Mandarine speech corpus AISHELL-1 [16], which contains over 170 hours of Mandarin speech data recorded from 400 speakers. We used the offical partitioning of the corpus, with 120,098 utterances from 340 speakers for training, 14,326 utterance from 40 speakers for validation and 7,176 utterances from 20 speakers for testing. For each speaker, around 360 utterances are released. For all experiments, we used 80-dimensional Mel filter banks coefficients (Fbank) features as input, and the frame length and shift was set to 25 ms and 10 ms respectively. We use a vocabulary set of 4230 Mandarine characters and 4

For the model training, we used Adam with Noam learning rate schedule (25000 warm steps) [1] as the optimizer. We used SpecAugment [17] for data augmentation. The attention dropout is probalility 0.1

2 RNN layers with 1024 units. We integrated language model into beam search by shallow fusion [18]. And the weight of the language model was set to 0.2 for all experiments. After 50epochs training, the parameters of the last 10

epochs were averaged as the final model. In the decoding stage, we used a beam search with a width of 5 for all models. We use pytorch

We first investigated the effect of the window length m of the RPSA-Transformer on AISHELL-1. Figure 5 shows the CER curves of the model with respect to m. From the figure, we see that the CER first decreases, and then becomes stable with the increase of m. Based on the above finding, we set m to 30 in all of the following comparisons.

In this paper, we have proposed three attention schemes for the encoder of the Transformer-based speech recognition, which are the RPSA, GSA, and resGSA respectively. Specifically, RPSA was proposed to replace the common SA for remedying the inefficient localness-aware modeling problem of the SA-Transformer. To overcome the weakness of RPSA on the window length selection problem, we further proposed GSA and an improved version resGSA, whose window lengths are learnable and highly related to the input sequences. GSA and resGSA can achieve dynamic localness modeling, i.e., different test frames may be assigned with different window lengths and weights. Experimental results on AISHELL-1 show that the GSA- and resGSA-Transformer achieve better performance than RPSA-Transformer, and do not have to tune the window length; the proposed models are significantly better than the representative ASR systems.