Dempster-Shafer evidence theory is an efficient mathematical tool to deal with uncertain information. In that theory, basic probability assignment (BPA) is the basic element for the expression and inference of uncertainty. Decision-making based on BPA is still an open issue in Dempster-Shafer evidence theory. In this paper, a novel approach of transforming basic probability assignments to probabilities is proposed based on Deng entropy which is a new measure for the uncertainty of BPA. The principle of the proposed method is to minimize the difference of uncertainties involving in the given BPA and obtained probability distribution. Numerical examples are given to show the proposed approach. 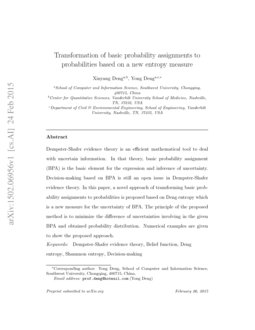 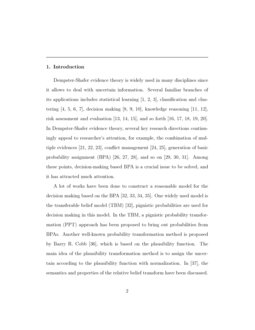 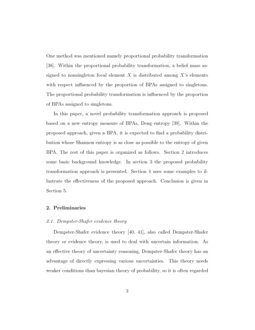 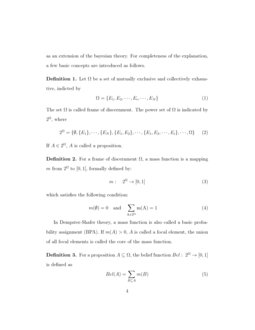 In this paper, a novel probability transformation approach is proposed based on a new entropy measure of BPAs, Deng entropy DengEntropyArXiv . Within the proposed approach, given a BPA, it is expected to find a probability distribution whose Shannon entropy is as close as possible to the entropy of given BPA. The rest of this paper is organized as follows. Section 2 introduces some basic background knowledge. In section 3 the proposed probability transformation approach is presented. Section 4 uses some examples to illustrate the effectiveness of the proposed approach. Conclusion is given in Section 5.

Dempster-Shafer evidence theory dempster1967upper ; shafer1976mathematical , also called Dempster-Shafer theory or evidence theory, is used to deal with uncertain information. As an effective theory of uncertainty reasoning, Dempster-Shafer theory has an advantage of directly expressing various uncertainties. This theory needs weaker conditions than bayesian theory of probability, so it is often regarded as an extension of the bayesian theory. For completeness of the explanation, a few basic concepts are introduced as follows.

Let Ω be a set of mutually exclusive and collectively exhaustive, indicted by

The set Ω is called frame of discernment. The power set of Ω is indicated by 2Ω, where

If A∈2Ω, A is called a proposition.

For a frame of discernment Ω, a mass function is a mapping m from 2Ω to [0,1], formally defined by:

which satisfies the following condition:

For a proposition A⊆Ω, the belief function Bel:2Ω→[0,1] is defined as

The plausibility function Pl:2Ω→[0,1] is defined as

In this section, a new measure for the uncertainty of BPA, Deng entropy is introduced first, then a new approach of transforming BPA to probability distribution is proposed based on the concept of Deng entropy.

Deng entropy DengEntropyArXiv is a generalized Shannon entropy to measure uncertainty involving in a BPA. Mathematically, Deng entropy can be presented as follows

where, Fi is a proposition in mass function m, and |Fi| is the cardinality of Fi. As shown in the above definition, Deng entropy, formally, is similar with the classical Shannon entropy, but the belief for each proposition Fi is divided by a term (2|Fi|−1) which represents the potential number of states in Fi (of course, the empty set is not included).

Specially, Deng entropy can definitely degenerate to the Shannon entropy if the belief is only assigned to single elements. Namely,

Assume the frame of discernment is Ω={ω1,ω2,⋯,ωn}, given a BPA m, a probability distribution P=(p(ω1),p(ω2),⋯,p(ωn)) associated with m is calculated by solving the following optimization problem:

where Ed(m) and Ed(P) are the entropies of BPA m and probability distribution P, respectively.

In this section, some illustrative examples are given to show the proposed probability transformation approach.

By using the proposed probability transformation approach, a probability distribution is obtained by

we can obtain that

The result shows that the transformed probability distribution has the maximum uncertainty (Shannon entropy) when the given BPA is totally unknown (i.e., m(Ω)=1).