A pure excedance in a permutation π=π_1π_2…π_n is a position i<π_i such that there is no j<i with i≤π_j<π_i. We present a one-to-one correspondence on the symmetric group that transports pure excedances to descents of special kind. As a byproduct, we prove that the popularity of pure excedances equals those of pure descents on permutations, while their distributions are different. 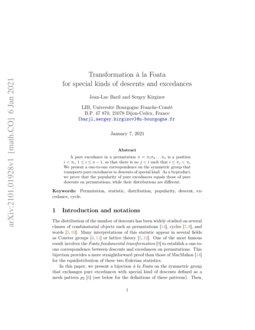 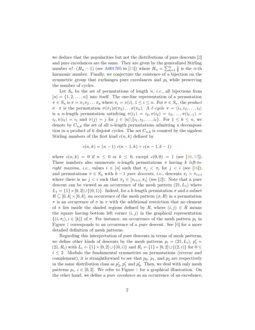 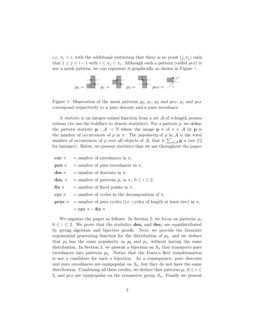 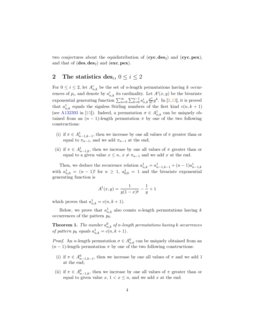 The distribution of the number of descents has been widely studied on several classes of combinatorial objects such as permutations [14], cycles [7, 8], and words [3, 10]. Many interpretations of this statistic appear in several fields as Coxeter groups [4, 11] or lattice theory [5, 12]. One of the most famous result involves the Foata fundamental transformation [9] to establish a one-to-one correspondence between descents and excedances on permutations. This bijection provides a more straightforward proof than those of MacMahon [14] for the equidistribution of these two Eulerian statistics.

In this paper, we present a bijection à la Foata on the symmetric group that exchanges pure excedances with special kind of descents defined as a mesh pattern p2 [6] (see below for the definitions of these patterns). Then, we deduce that the popularities but not the distributions of pure descents [2] and pure excedances are the same. They are given by the generalized Stirling number n!⋅(Hn−1) (see A001705 in [15]) where Hn=∑nk=11k is the n-th harmonic number. Finally, we conjecture the existence of a bijection on the symmetric group that exchanges pure excedances and p2 while preserving the number of cycles.

Regarding this interpretation of pure descents in terms of mesh patterns, we define other kinds of descents by the mesh patterns pi=(21,Li), p′i=(21,Ri) with Li={1}×[0,2]∪{(0,i)} and Ri={1}×[0,2]∪{(2,i)} for 0≤i≤2. Modulo the fundamental symmetries on permutations (reverse and complement), it is straightforward to see that p0, p1, and p2 are respectively in the same distribution class as p′2, p′1 and p′0. Then, we deal with only mesh patterns pi, i∈[0,2]. We refer to Figure 1 for a graphical illustration. On the other hand, we define a pure excedance as an occurrence of an excedance, i.e. πi>i, with the additional restriction that there is no point (j,πj) such that 1≤j≤i−1 with i≤πj<πi. Although such a pattern (called pex) is not a mesh pattern, we can represent it graphically as shown in Figure 1.

A statistic is an integer-valued function from a set A of n-length permutations (we use the boldface to denote statistics). For a pattern p, we define the pattern statistic p:A→N where the image p π of π∈A by p is the number of occurrences of p in π. The popularity of p in A is the total number of occurrences of p over all objects of A, that is ∑a∈Ap a (see [5] for instance). Below, we present statistics that we use throughout the paper:

We organize the paper as follows. In Section 2, we focus on patterns pi, 0≤i≤2. We prove that the statistics des0 and des1 are equidistributed by giving algebraic and bijective proofs. Next, we provide the bivariate exponential generating function for the distribution of p2, and we deduce that p2 has the same popularity as p0 and p1, without having the same distribution. In Section 3, we present a bijection on Sn that transports pure excedances into patterns p2. Notice that the Foata’s first transformation is not a candidate for such a bijection. As a consequence, pure descents and pure excedances are equipopular on Sn, but they do not have the same distribution. Combining all these results, we deduce that patterns pi, 0≤i≤2, and pex are equipopular on the symmetric group Sn. Finally we present two conjectures about the equidistribution of (cyc,des2) and (cyc,pex), and that of (des,des2) and (exc,pex).

For 0≤i≤2, let Ain,k be the set of n-length permutations having k occurrences of pi, and denote by ain,k its cardinality. Let Ai(x,y) be the bivariate exponential generating function ∑∞n=0∑n−1k=0ain,kxnn!yk. In [2, 13], it is proved that a1n,k equals the signless Stirling numbers of the first kind c(n,k+1) (see A132393 in [15]). Indeed, a permutation σ∈A1n,k can be uniquely obtained from an (n−1)-length permutation π by one of the two following constructions:

Below, we prove that a1n,k also counts n-length permutations having k occurrences of the pattern p0.

Now, we focus on the distribution of the pattern p2. Table 1 provides exact values for small sizes.

and the general term a2n,k satisfies for n≥2 and 1≤k≤⌊n2⌋

Let σ=σ1σ2…σn denote a permutation of length n having k occurrences of pattern p2. Let un,k (resp. vn,k) be the number of such permutations satisfying σn=n (resp. σn<n). Obviously, we have

A permutation σ with σn=n can be uniquely constructed from an (n−1)-length permutation π as σ=π1π2…πn−1n. No new occurrences of p2 are created, and we obtain

A permutation σ satisfying σn<n can be uniquely obtained from an (n−1)-length permutation π by adding a value x<n on the right side of its one-line notation, after increasing by one all the values greater than or equal to x. This construction creates a new pattern p2 if and only if π ends with n−1. Thus, we deduce

Combining the equations, we obtain for n≥2 and k≥1

which implies the following differential equation

There is a one-to-one correspondence ϕ on Sn such that for any π∈Sn, we have

Let π be a permutation of length n having k occurrences of p2. We decompose

- Aj is a maximal sequence such that all its values are lower than πij,

Now we construct an n-length permutation ϕ(π) with k pure cycles as follows:

Note that ϕ−1 is closely related to the Foata fundamental transformation.

3 The statistic pex of pure excedances

In order to prove the equidistribution of pex and des2, regarding Theorem 3, it suffices to construct a bijection on Sn that transports pure excedances to pure cycles. Here, we first exhibit a bijection on the set Dn of n-length derangements (permutations without fixed points), then we extend it to the set of all permutations Sn.

Any permutation π∈Sn is uniquely decomposed as a product of transpositions of the following form:

where ti are integers such that 1≤ti≤i. The transposition array of π is defined by T(π)=t1t2…tn, which induces a bijection π⟼T(π) from Sn to the product set Tn=[1]×[2]×⋯×[n]. By Lemma 1 from [1], the number of cycles of a permutation π is given by the number of fixed points in T(π). Moreover, it is straightforward to check the two following properties:

- if ti=i and πi≠i, then i is the minimal element of a cycle of length at least two in π.

So, we deduce the following lemma.

The transposition array t1t2…tn∈Tn corresponds to a derangement if and only if: ti=i ⇒ there is j>i such that tj=i.

Now we define the map λ from Dn to the set T∙n of transposition arrays of length n satisfying the property of Lemma 1.

For a permutation π=π1π2…πn∈Dn, we label its graphical representation as defined above, and λ(π)=λ1λ2…λn is obtained as follows:

Let us consider i, 1≤i≤n. If i is a pure excedance of π, then we fix λi=i and λπ−1(i)=i<π−1(i). Otherwise, the square (i,i) is unfree, and all squares (i,πk), i+1≤k≤n, are unfree, which implies that the number of free squares in the ith column is less than or equal to i. This means that λ(π) lies in Tn. Note that, by construction, all labeled squares do not correspond to any pure excedance. Now let us prove that the square (i,πi) cannot be labeled i. Indeed, if πi<i then the label of (i,πi) is necessarily at most πi≤i−1; otherwise, if πi>i then the fact that i is not a pure excedance implies that there is πj∈[i,πi−1] with j<i. Let us choose the lowest j with this property. Using (v), the square (i,j) is unfree, which implies that the label of (i,πi) is less than or equal to n minus the minimal number of unfree squares (i,j) in column i, that is n−(n−i+1)=i−1. Moreover, the transposition array λ(π) has exactly pex π fixed points, and for any fixed point i there necessarily exists j=π−1(i)>i such that λj=λi=i. This implies that λ(π)∈T∙n.

Since the cardinality of T∙n equals that of Dn, and the image of Dn by λ is contained in T∙n, it suffices to prove the injectivity.

There is a one-to-one correspondence ψ on the set Dn of n-length derangements such that for any π∈Dn,

Considering Theorem 3 and Theorem 4, we define for any π∈Dn, ψ(π)=ϕ(σ) where σ is the permutation having λ(π) as transposition array. ∎

Considering Theorem 5, we define the map ¯ψ on Sn. Let π′ be the permutation obtained from π by deleting all fixed points and after normalization as a permutation. Let I={i1,i2,…,ik} be the set of fixed points of π. Then, we set π′′=ψ(π′). So, σ=¯ψ(π) is obtained from π′′ by inserting fixed points i∈I after a shift of all other entries in order to produce a permutation in Sn. By construction, we have pex π=pcyc σ and fix π=fix σ which completes the proof. ∎

A byproduct of this theorem is

The statistics cyc and pex+fix are equidistributed on Sn.

Also, a direct consequence of Theorem 3 and Theorem 6 is

The two statistics pex and des2 are equidistributed on Sn.

Notice that the Foata’s first transformation is not a candidate for proving the equidistribution of pex and des2, while it transports exc to des.

are true then their proofs are probably independent.

We would like to greatly thank Vincent Vajnovszki for having offered us Conjecture 2.